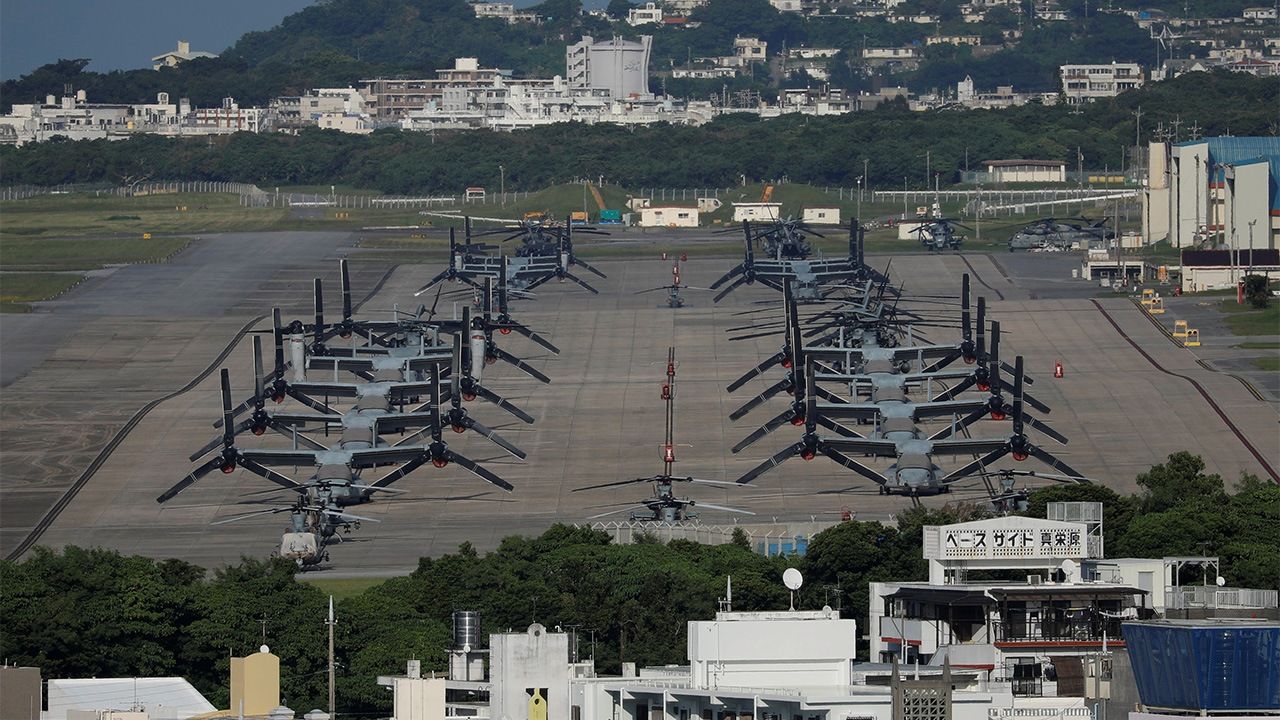 Reducing the Base Burden in Okinawa: Is Relocation the Answer?

Politics May 15, 2022
The author, an expert in international relations, calls for a new approach to reduction of the base burden in Okinawa, taking into account changes in US military strategy in the region.

Over the past 25 years or so, it has become almost impossible to hold a calm, productive discussion on the topic of the US military bases in Okinawa. The main reason is the controversy over relocation of Marine Corps Air Station Futenma in Ginowan. As the standoff has dragged on, the rhetoric has grown increasingly heated, hostile, and ideologically polarized. In the following, I attempt to refocus the debate on the original rationale for the plan, namely, mitigating the danger to and burden on the local citizens.

Proposals for the return of MCAS Futenma have been on the table since 1995, when the beating and rape of an Okinawan girl by three American servicemen triggered a wave of protests and calls for revision of the 1960 Status of Forces Agreement (SOFA). In 1996, hoping to stem the tide of anti-base feeling in Okinawa, the Japanese and US government reached an agreement to close the base and return the land to Japan within seven years, on the condition that suitable replacement facilities be built elsewhere. Near the end of 1999, the government of Nago, in the northeast of Okinawa Island, gave its conditional approval for a plan to build the Futenma replacement facilities offshore from the city’s Henoko district. However, the relocation plan adopted by the Japanese and US governments in 2006 (under the US-Japan Roadmap for Realignment Implementation) ignored the conditions the local authorities had set. In 2009, when the Democratic Party of Japan took over from the Liberal Democratic Party, Prime Minister Hatoyama Yukio came out firmly against the 2006 plan and pledged to move the Futenma facilities “outside the prefecture at the least.” But the following year, he backtracked and reverted to the 2006 plan.

Amid changes in leadership at the national and prefectural levels and the growing regional security challenges posed by North Korea and China, Washington and Tokyo have altered the terms of the relocation agreement again and again, and these unilateral changes have fueled mistrust and hostility among the Okinawans. As this anti-base, anti-Tokyo sentiment has mounted, the options for negotiating a solution have dwindled.

Moreover, the escalating political and verbal warfare between the Okinawan and national authorities has helped transform the issue into a highly charged clash of ideologies and identities. Supporters of the government’s position have accused Okinawans of blocking relocation out of mercenary motives or of being pawns in China’s regional strategy. On the other side, we hear charges of longstanding discrimination against the Okinawans. Such polarization has made compromise all the more difficult.

Rather than add fuel to this fire, I would like to reframe the debate by going back to the basics of the problem—the concrete impact of MCAS Futenma (and other bases) on safety and quality of life in the surrounding community. Focusing on the issue of noise pollution, I would like to challenge some of the basic assumptions driving the Futenma debate.

In May 2021, I participated in a webinar held by the East-West Center in Washington on the topic of Reducing the Burden of Military Bases on Okinawa. Because of the time difference, it was already 11:00 pm in Ginowan when it came time for me to deliver my presentation, an explanation of certain recommendations submitted to Okinawa Governor Tamaki Denny by the Bankoku Shinryō Council on US Military Base Issues, of which I was a member. Even at that time of night, my talk was repeatedly interrupted by the clamor of American helicopters from nearby Futenma flying over my apartment. While discussing the problems surrounding the current SOFA, I pointed out that this kind of noise pollution was a constant in the lives of Okinawans.

Paul Vosti, then director for Japan policy in the Office of the US Secretary of Defense, blamed the frustration of residents over noise pollution on the slow pace of efforts to return Futenma and other bases in the heavily populated southern and central sections of Okinawa Island. However, he insisted that progress was being made in the construction of the Henoko replacement facility and the relocation of training activities to other parts of Japan and suggested that many of the SOFA issues would disappear as plans for joint bases (shared with the Japan Self-Defense Forces) moved forward.

The basic problem with this response is that it assumes that the noise issue will be resolved by moving bases like MCAS Futenma to less heavily populated areas. This might have been true back in 1996, when Futenma was valued as a base for the deployment, refueling, and maintenance of reinforcement air squadrons that might be sent from the United States to the region in the event of a North Korean contingency. But the base’s role has changed dramatically since then.

Nowadays MV-22 Osprey transport craft, stationed at MCAS Futenma since 2012, conduct routine training exercises across the length and breadth of Okinawa Island. Training typically involves a series of takeoffs and landings at any of 69 landing sites established within Okinawa Prefecture. For example, from Futenma in central Okinawa, the Ospreys might proceed base by base toward the Northern Training Area, stopping at Camp Hansen, Camp Schwab (site of the planned relocation), Kin Blue Beach Training Area, and Iejima Auxiliary Airfield. They routinely fly over the southern cities of Naha and Urasoe before returning to Futenma. Even if MCAS Futenma were relocated to the Camp Schwab area, its aircraft would continue to fly over central and southern Okinawa on a daily basis. 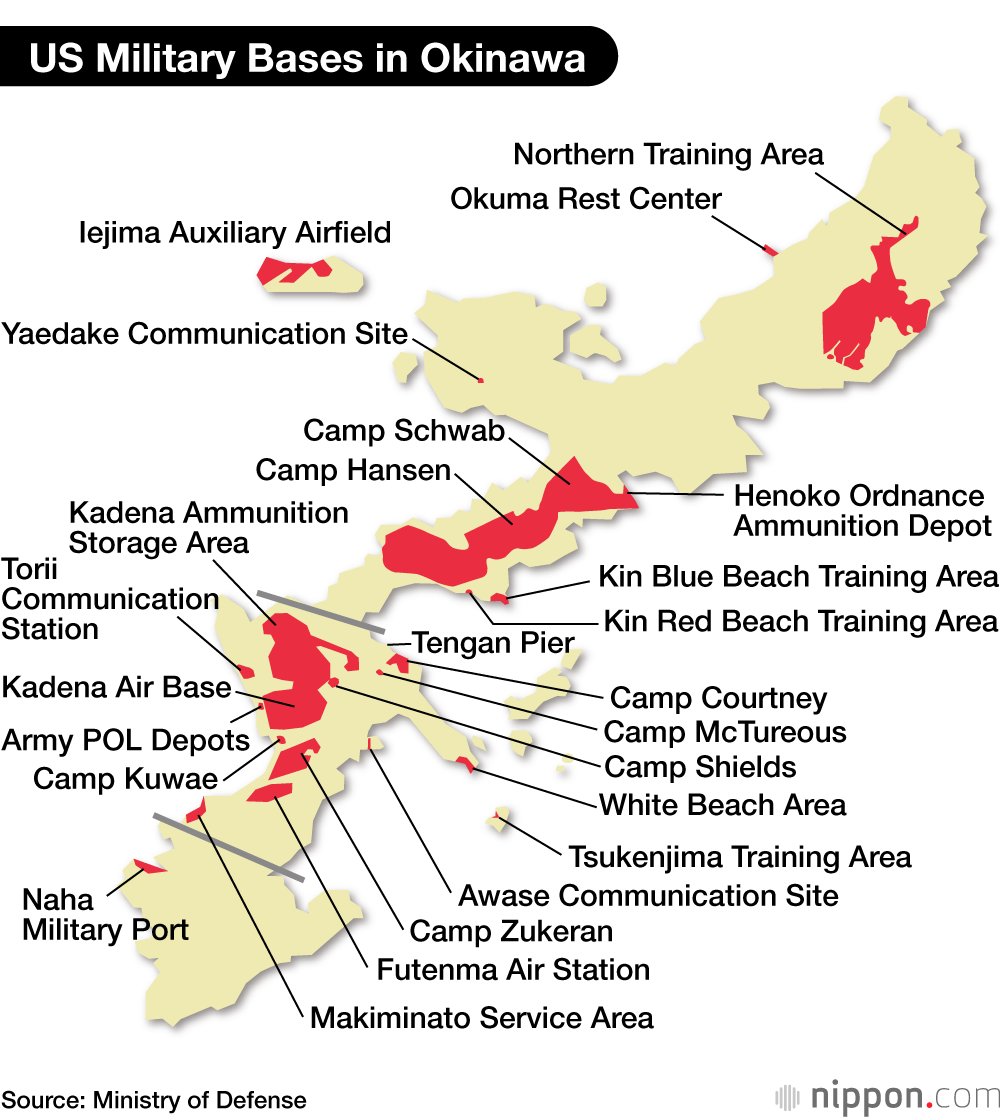 Okinawa and the New Operating Concept

Moreover, since 2017, the Marine Corps has been shifting its strategic emphasis to dispersed operations by small units, reducing its reliance on large military bases. Under the Expeditionary Advanced Base Operations (EABO) concept, developed in response to China’s growing missile capability, small, highly mobile units would be used to establish temporary bases for missiles and aircraft on strategically located remote islands in an effort to block the enemy’s naval advance and secure sea lanes. To implement the concept, the Marines are building training bases all over Okinawa, as well as other parts of Japan, and are expanding and intensifying their training exercises.

In a parallel move, the US Air Force has adopted the Agile Combat Employment (ACE) concept, which calls for a network of smaller, more widely distributed forward operating locations. ACE training exercises conducted at Futenma by USAF units from Kadena Air Base have contributed to an increase in the frequency of aircraft landings and takeoffs at MCAS Futenma. Low-altitude flights by MC-130 special operations aircraft over the Kerama Islands and Cape Hedo (the northernmost point of Okinawa Island) have caused alarm among the residents.

In short, changes in the Asia-Pacific security environment have triggered a shift in the US military strategy, with the result that training is going on all over Okinawa Prefecture, irrespective of the location of major bases. In the circumstances, relocation of an air base from one part of the prefecture to another seems unlikely to solve the noise problem.

Respect the Decisions of the Japan-US Joint Committee

However, there is something the Japanese government can do right now to mitigate the danger and noise: demand that the US military comply with the agreements reached by the Japan-US Joint Committee.

The current SOFA, which dates to 1960, makes no provision for the conduct of training exercises outside of US bases. The military justifies its air exercises by characterizing them as “movement between facilities and areas in use by the United States armed forces,” which is guaranteed to US military vehicles and personnel under article 5 of SOFA.

The Japan-US Joint Committee, a high-level consultative organ established under SOFA, has reached agreement on noise-abatement policies for the Yokota, Atsugi, Futenma, and Kadena bases, including limits on late-night and early-morning takeoffs and landings and low-altitude flights. However, these agreements do no more than require the bases’ best efforts. Indeed, they clearly state that the restrictions can be lifted as deemed necessary by the US Forces Japan.

The Futenma noise abatement measures agreed on in 1996 state that “airfield traffic pattern configuration, including entry and exit routes, should be designed to avoid over flight of densely populated areas, including schools and hospitals, as much as possible.” The military’s disregard of that agreement was vividly demonstrated in 2004, when a CH-53 helicopter crashed into the main building of Okinawa International University and burst into flames. In 2007, the Japanese and US governments reaffirmed the principle of avoiding flights over schools, but this, too, was ignored. In 2017, parts from a Futenma helicopter fell from the sky and landed on the grounds of a local elementary school.

The University of the Ryūkyūs, where I teach, is located about three kilometers from the air base, and my lectures are invariably interrupted by the roar of aircraft flying overhead. On one occasion, a training flight passed directly over the building where high school seniors were taking the English listening component of the nationwide university entrance examination. Since the COVID-19 pandemic hit, moreover, classroom windows must be left open to provide ventilation. As a result, I have no choice but to stop the class while we wait for a dozen or so military aircraft to pass over.

What is to be done?

Since the 1990s, the government of Okinawa has been calling for renegotiation of SOFA to address Okinawans’ grievances, arguing that the Joint Committee’s efforts to “improve the operation” of SOFA are ineffective. But the Japanese government has shown no sign of relenting. In either case, an agreement must be respected if it is to make a difference. Recent history suggests that the Joint Committee agreements can have an impact if the Japanese government is serious about enforcing them. For many years local Japanese authorities were unable to detain and question US military personnel charged with committing crimes off base until a formal indictment had been returned. However, after two successive agreements by the Japan-US Joint Committee, that has changed.

Even if the Japanese government is unwilling to undertake renegotiation of SOFA, it can surely pressure the Americans to abide by the noise-abatement agreements adopted by the Joint Committee. This is a practical step we can take toward addressing the core safety and quality-of-life issues posed by the US bases in Okinawa.