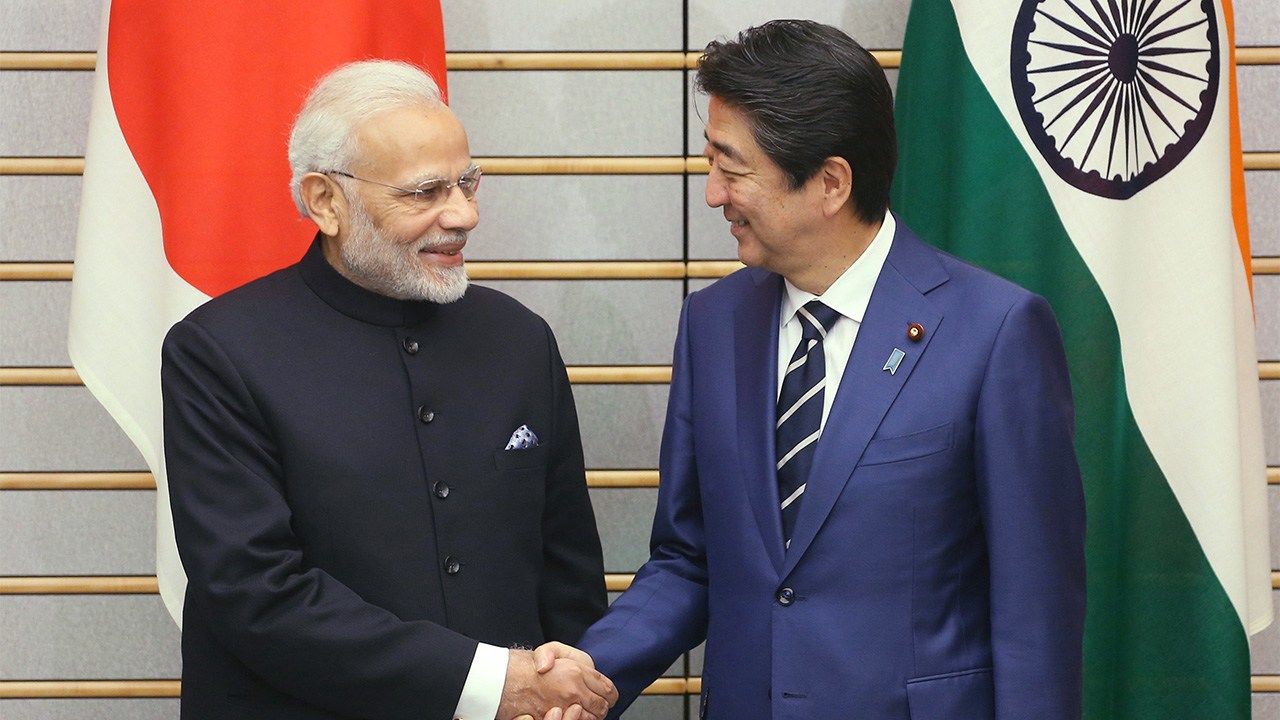 A Look at Abe Shinzō’s Legacy in Japanese Security Policy

On July 8, 2022, a gunman took the life of former Prime Minister Abe Shinzō, shocking the nation. The following is a summary of eight years of diplomatic and security policy initiatives during the second Abe administration (2012–20) and the strategic and diplomatic legacy Abe leaves behind for Japan.

The “Free and Open Indo-Pacific” Vision

Perhaps Prime Minister Abe’s most notable initiative was the implementation of his “Free and Open Indo-Pacific” vision. It was sufficiently influential that US President Donald Trump immediately embraced it and the US Pacific Command in Hawaii was renamed the Indo-Pacific Command. Australia, Britain, France, Germany, the European Union, and the Association of Southeast Asian Nations all followed suit by launching “Indo-Pacific” strategic visions one after another. Two reasons account for the popularity of “Indo-Pacific” geopolitical framework.

The first reason is that the vision brilliantly articulates the strategic transformation of international politics in the first half of the twenty-first century. Namely, it sheds light on the strategic alienation of Japan and the United States from China while the same two countries have grown closer to India.

International stability is currently predicated on the interaction of two strategic triangles. The first triangle is the predominantly maritime “western” framework encompassing Europe, Maritime Asia, and North America. It is comprised of the European North Atlantic Treaty Organization countries at the western end of Eurasia, and Japan, South Korea, the Philippines, Thailand, and Australia at the eastern end. It is tied together by the United States, the primary ally for these nations.

Within this triangle is another triangle of unique dynamism comprising the continental Eurasian powers of Russia, China, and India.

The United States has always tried to exploit relations between these three great continental powers to its advantage. In World War II, it used the Soviet Union to halt Hitler’s advance and eventually defeat Nazi Germany. During the Cold War, the United States took advantage of the Sino-Soviet split in the 1960s to engage Beijing and confront Moscow. Predicated on the logic of “the enemy of my enemy is my friend,” other countries such as Japan soon followed suit in normalizing relations with the People’s Republic of China, bringing about an era of détente. One byproduct of this maneuvering, however, was that “non-aligned” India grew closer to the Soviet Union due to New Delhi’s wariness of China, which had attacked Indian territory in 1958 and 1962. The legacy of this is that even now almost all of India’s weapons are made in Russia.

As strategic competition between the United States and China has deepened in the new millennium, India has slowly turned from alignment with Russia to engagement with the US-Japan alliance. In August 2007, when Abe visited India as prime minister during his first administration, he delivered a speech to the Indian Parliament entitled “Confluence of the Two Seas,” articulating his idea that the Pacific and Indian Ocean regions functioned as a single strategic entity and positioning India as an important partner for the West given shared values and interests.

The Indian Parliament erupted with applause in response to his speech. Abe subsequently turned his vision of a “confluence of two seas” into the “Free and Open Indo-Pacific” framework, within which sits the increasingly important geopolitical framework of the Quad—comprised of the maritime powers of the United States, Japan, India, and Australia.

The second reason is that the important partnerships in the Indo-Pacific vision are between democracies. While Roosevelt teamed up with Stalin to crush Hitler, and Nixon with Mao to confront the Soviet Union, both choices were expedients born of power politics. By contrast, the United States embracing India, the democratic state birthed by Gandhi and nurtured by Nehru, could bring into existence a massive democratic coalition of nations spanning the coasts of the Indo-Pacific region to the Americas.

The Quad, which underpins the Indo-Pacific, is a framework in which the four powers of the United States, Australia, Japan, and India, each with completely different historical and civilizational backgrounds, are united by universal values. The United States and Australia overcame domestic racism, embraced liberty, and developed mature democratic systems. Japan modernized quickly and started on the path to democracy before being defeated in World War II after militarism took hold. Japan, however, revived its commitment to freedom and democracy after World War II and reemerged as a major power. Under the spiritual leadership of Gandhi, India broke free from the yoke of British colonialism after World War II and achieved independence as a democracy. This country will soon overtake Japan in terms of economic scale.

During his tenure, Abe embraced the responsibility of supporting the liberal international order. When he gave his statement on the seventieth anniversary of the end of World War II, he reflected positively on historical trends in human society. He noted that respect for all people and the achievement of equality and freedom had helped nations forge a consensus on international rules, and approvingly recognized the global spread of universal values. This forward-looking view of history received strong support from the Japanese people and acknowledgement from other Asian countries.

As prime minister, Abe worked hard to enact “peace and security” legislation authorizing the exercise of right to collective self-defense—a long-running issue in Japan’s postwar history. In all major international agreements in the postwar period, the Japanese government made it clear that Japan, like all other nations, possessed the right of collective self-defense as identified in the United Nations Charter. However, the second paragraph of Article 9 of the Japanese Constitution prohibits the possession of land, sea, and air forces. This paragraph was inserted into the Constitution in the early period of the Occupation due to a shortsighted pre–Cold War decision by the General Headquarters of the Allied Forces (GHQ) to completely demilitarize Japan.

The 1959 Supreme Court ruling in the Sunagawa case endorsed the view that Japan retained the right of individual self-defense under the Constitution. However, the government continued to tie its own hands with a constitutional interpretation that denied Japan the ability to exercise the right of collective self-defense. Japan’s internal politics at the time was structured by Cold War tensions and divisions. The ruling Liberal Democratic Party wanted to strengthen the US-Japan alliance, including the exercise of collective self-defense, while the Japan Socialist Party advocated unarmed neutrality and opposed the alliance. During the Cold War, whether the Japanese government could exercise its internationally recognized right of collective self-defense was a highly politicized debate.

The US-Japan Security Treaty, revised in 1960 by Prime Minister Kishi Nobusuke (Abe’s grandfather) contained the “Far East” Clause (Article 6), in addition to Article 5, which outlined an American obligation to participate in the joint defense of Japan. Article 6 allowed the United States to use Japan as a support base for protecting Korea and Taiwan (former territories of the Japanese Empire) in addition to the Philippines (a former US territory).

Like others, the United States also feared Japan’s re-emergence as a military power after the war, and the American military was considered the “cork in the bottle” of the demon of Japanese militarism. Thus, even when Japan created the Self-Defense Forces in 1954, the scale of militarization was kept modest.

The 1990s, however, brought the end of the Cold War and the dissolution of the Soviet Union. North Korea soon decided to develop nuclear weapons, and as the United States imposed severe sanctions in response, fears of a second Korean War increased. The dissipation of the military threat from Moscow in Japan’s north around Hokkaidō raised expectations that the United States would request assistance from Tokyo as it did during the first Korean War. The Hashimoto Ryūtarō cabinet revised the US-Japan Defense Guidelines in 1997, and the Obuchi Keizō cabinet then passed the “areas surrounding Japan” legislation in 1999 that enabled Japan to provide logistical support to American forces in the event of another Korean War or other regional contingency. However, the position that Japan was constitutionally prohibited from exercising its right of collective self-defense and engaging in combat overseas remained unchanged.

The Abe administration’s reinterpretation of the constitution to allow Tokyo to exercise the right to collective self-defense allowed deeper coordination between the SDF and the US military in regional contingencies where Japan’s existence is threatened by conflict, but the Japanese mainland has not yet been attacked. Abe’s constitutional reinterpretation and the resulting legislation therefore greatly increased the deterrent power of the US-Japan alliance. In theory, both Japan and the United States now hold equal responsibility for regional defense in the North Pacific.

In 2013, Mr. Abe was the first Japanese prime minister to officially promulgate a National Security Strategy. This strategy then framed the revision of the National Defense Program Guidelines and Midterm Defense Plan soon after. Both documents were further revised in 2018 on Abe’s watch.

In addition to the existing strategic focus on Hokkaidō, Sakhalin, and the Korean Peninsula, the new documents placed greater emphasis on the defense of Japan’s Nansei Islands at the southwestern end of the archipelago. Defending Japan’s islands in the vast East China Sea region against the PRC and providing support in the event of a Taiwan contingency would be an extremely difficult task. To this end, the Abe administration set up a 3,000-soldier-strong amphibious task force, and SDF responsibilities expanded into the cyber, electromagnetic, and space warfare domains.

The defense budget sat at ¥4.7 trillion yen when Mr. Abe entered office for the second time in 2012. When he left office in 2020, it had increased to ¥5.5 trillion (including supplemental budget spending). However, during the same period, China’s economy grew to three times the size of Japan’s and three-quarters the size of the US economy. The PRC’s military spending skyrocketed at an even greater pace to five times Japan’s defense budget (approximately ¥25 trillion). Despite Abe’s efforts, Japan has entered an era where spending 2% of its GDP (¥10 trillion) on defense in line with the NATO standard is the bare minimum.

It is important, however, to remember that the SDF was originally established to blunt a Soviet Invasion of Hokkaidō for a few months until American forces arrived to relieve them. Even spending 2% of GDP defense for several years is unlikely to make the SDF capable of countering and repelling Chinese forces for an extended period of time. Abe fully understood the need to boost SDF capabilities. Japan desperately needs a leader who will carry on the Abe legacy through substantive enhancements of Japan’s national defense strength.