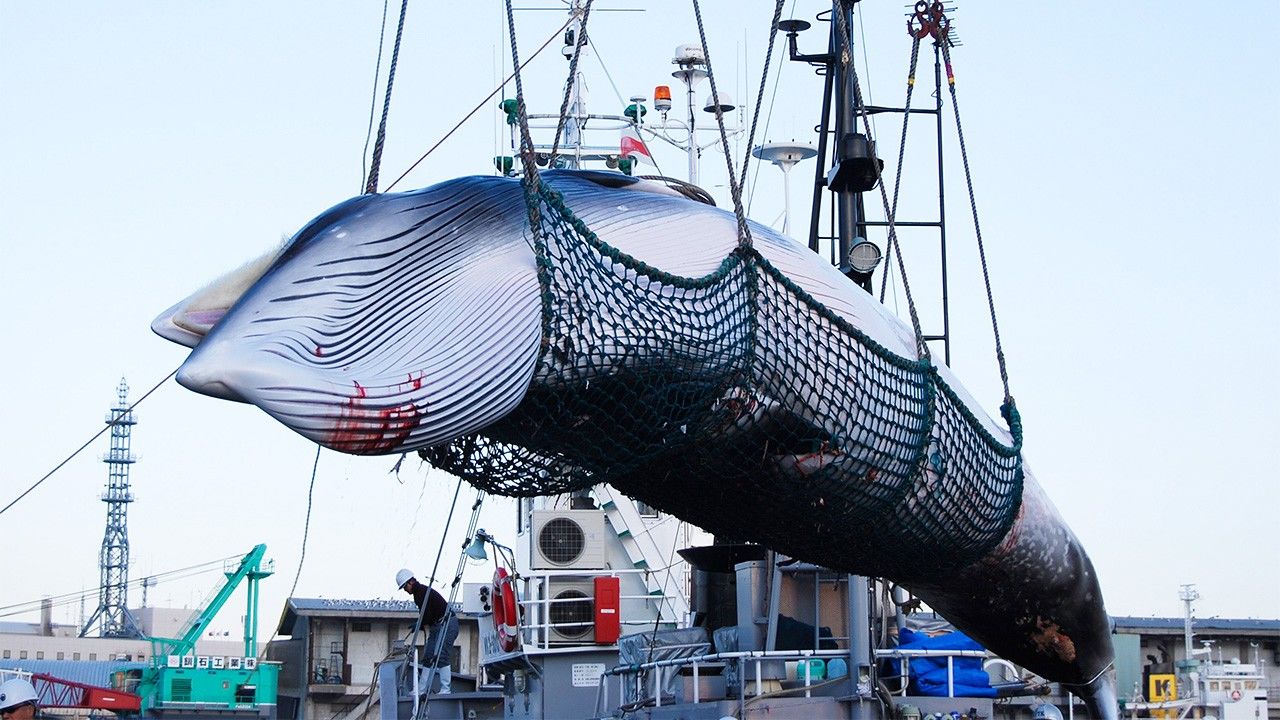 Politics Economy Culture Environment Apr 10, 2019
In the documentary film A Whale of a Tale, director Sasaki Megumi used the whaling controversy to address questions of cultural difference and regional diversity. Now that Japan has formally announced that it will withdraw from the International Whaling Commission and resume commercial whaling, Sasaki argues that the government needs to continue to explain its stance to the international community, without simply relying on the justification of “tradition.”

Japan’s controversial whaling program made international headlines again toward the end of last year, when Chief Cabinet Secretary Suga Yoshihide announced on December 26, 2018 that Japan would withdraw from the International Whaling Commission and resume commercial whaling in Japanese territorial waters from July 1, 2019.

At first, I was stunned. I could hardly believe that the Japanese government, usually so cautious in its diplomatic policy, had chosen to part ways so dramatically with the international community on such an important issue. The decision was roundly criticized within Japan, as well as overseas, with many people arguing that the government’s decision was rash and imprudent. Some commentators worried that Japan might be following in the isolationist footsteps of Donald Trump by instituting a more assertively protectionist foreign policy. There was a widespread feeling that the government could have persisted with negotiations and done more to argue Japan’s case at the IWC. In many ways, this marked a shift in the public mood, which had been largely supportive or protective of the nation’s whaling program in the past.

The IWC: No Longer Fit for Function

My own view, however, is that the decision to leave the IWC was a wise one. For many years, it has been obvious that it has been failing to fulfill its function as an international regulatory body. I have covered three of its general assemblies, and been struck by the preponderance of emotional arguments and the stubborn refusal to contemplate concessions or compromises. When I first visited, I was astonished that such a dysfunctional international body could be allowed to exist.

The IWC was founded in 1948 to implement the International Convention for the Regulation of Whaling. The purpose was for whaling countries to come together to discuss the proper management of whale “stocks” and to plan the sustainable regulation and development of the whaling industry. Today, the commission has evolved to become something quite different. This is obvious simply from a look at the list of member countries. Of the 89 countries who sent representatives to the general assembly at Florianopolis, Brazil in 2018, there were only three whaling nations: Japan, Norway, and Iceland. There were four other countries where indigenous peoples continue to hunt whales on a small scale using traditional methods, such as the Inuit in the United States. The remaining 82 countries have no connection with whaling; some are landlocked like Mongolia and Austria. A deep gulf divides two bitterly opposed camps: those countries in favor of sustainable whaling, who want to use whales as a resource (around 40 countries), and their opponents, who take issue to the idea of killing whales in any circumstances. A bitter debate has raged for decades between these two groups, without producing any results.

Some of the negative response to the decision to withdraw may have been due to the feeling that it seemed to come suddenly, and a suspicion that it had been prompted by a small coterie of politicians with extreme views. But Professor Morishita Jōji of the Tokyo University of Marine Science and Technology, says that the formal decision was nearly five years in the making. Professor Morishita, who has been on the frontlines of the whaling controversy for nearly 30 years, has served as Japan’s envoy on the IWC science committee and as Japan’s representative at general meetings.

There have been numerous attempts to break through the impasse, but these have all ended in failure. Although some countries want to use whales as a sustainable resource, they are opposed by a larger group who feel that whaling is morally wrong and refuse to countenance the idea of killing even a single whale. If the IWC was functioning properly as an international body, compromises and give-and-take might make it possible to find a middle way between these two positions. But at the IWC this is simply impossible. Morishita says that for many anti-whaling countries even admitting the possibility of sustainable whaling is regarded as akin to negotiating with terrorists. “If any member negotiated with a pro-whaling nation like Japan and ended up allowing even the possibility of small-scale whaling, the result would get the negotiator dismissed and bring down a torrent of criticism on the national government from public opinion and nongovernmental organizations,” Morishita says. This makes almost any meaningful discussion impossible: Japanese representatives cannot even discuss with their opponents the reasons why they are so adamantly opposed to whaling.

Japan’s Last Throw of the Dice

Based on many years’ experience of these frustrating circumstances, Japan’s representatives in Brazil made a bold proposal. It was a last throw of the dice: an attempt to find a compromise that would allow groups with diametrically opposed views to coexist under the same roof. The idea was to establish two subcommittees at the IWC, a Sustainable Whaling Committee (pro-whaling) and a Conservation Committee (anti-whaling). The two committees would make decisions independently and then share them at general assemblies of the IWC. It was an attempt to find a way forward by having the two sides agree to disagree.

This would have made the IWC essentially a venue for confirming and rubber-stamping decisions—there would be no more debates involving the entire membership. Meanwhile, the host country Brazil, which is staunchly opposed to whaling, submitted a rival proposal declaring that the IWC should henceforth make protecting whales the focus of its work. The so-called Florianopolis Declaration was duly adopted, and Japan’s proposal came to nothing.

Morishita, who was the first Japanese chair for 50 years at the assembly, says that this experience brought home to him again the extent to which the IWC has evolved from its original purpose. Although in previous years there were serious discussions based on data provided by the scientific committee, today the IWC is essentially under the control of the anti-whaling nations, and Morishita describes it as a back-slapping club where anti-whaling delegates pal together and refuse to listen to any opinions but their own.

When I covered the general meeting in previous years, something of an atmosphere of tense antagonism still existed between the two sides. Now that even this has gone, it seems all but certain that the impasse will never be broken, regardless of how hard Japan tries to negotiate. It is not difficult to understand why Japan felt it had no choice but to withdraw.

Why Appeals to “Tradition” Are Not Enough

In the years to come, gaining the understanding of the international community on the whaling issue will be a crucial task for Japan. Until now, it is fair to say that one major reason for Japan’s failure has been its lack of communication smarts and an inability to convey information effectively. When I covered the IWC, the press briefings held by the Japanese government were for Japanese journalists only, and conducted entirely in Japanese. I often heard complaints from the foreign media that they had applied to interview representatives from the Japanese government, only to have their requests turned down. Meanwhile, representatives for anti-whaling countries and NGOs all smilingly accept such requests. It is no wonder that only anti-whaling messages receive wide coverage.

And then there is the question of why Japan insists on continuing to carry out whaling in the face of such fierce criticism from the international community. Japan needs to explain its reasons in a way that people overseas might understand and sympathize with. Simply insisting that it is a Japanese “tradition” is not likely to convince anyone. Westerners and Japanese think about tradition in different ways. In the West, people evaluate whether long-standing traditions are in accord with the needs of the current times. If  not, they can be ruthless in shrugging them off. This means that any defense of whaling simply on traditional grounds is liable to be dismissed: opponents take it that whaling is simply another anachronistic barbarous tradition that should be abandoned as incompatible with modern morality, like slavery or ritual suicide.

Instead of appealing to tradition, Japan should underline the different views of nature stemming from the cultural and religious differences between Japanese and Westerners, and the unique relationship between human life and other living creatures that exists in Japanese culture. The government should make clear what whaling means to Japanese people in areas where it has been a part of their lives for many years. In these areas, whaling is more than a source of food and economic livelihood; it is a vital part of local identity and a source of community pride. One aspect of the controversy is a war of information. The wrangling has had a huge negative impact on Japan’s international image and reputation, and the government should hire specialists to put together an effective and well-thought-out PR strategy.

When my documentary film A Whale of a Tale was released in the United States in 2018, it met with a much more positive response than I had expected. The film is set in the small fishing town of Taiji in Wakayama Prefecture, home to around 3,000 people, who have a tradition of hunting whales and other cetaceans that dates back at least 400 years. The film showed how a stream of foreign activists into the town has created discord and resentment in the community.

Many people who saw the film in the United States said that their basic views on whaling had not changed—they still did not want whales and dolphins to be killed—but they admitted that they too killed large numbers of cows and pigs for food. Audience members said they felt after seeing the film that it was wrong for outsiders to go to a small town in Japan and push their own values on the people there by telling them that killing whales was “barbaric.” They welcomed the different way of looking at the issue. Once they are given proper information, American audiences are prepared to think seriously and reconsider the issues. It brought home to me the importance of presenting information without fear of criticism.

At an Asia Society screening of A Whale of a Tale in New York in August 2018. The film played to a full house. (Courtesy Sasaki Megumi)

The whaling issue goes beyond the question of the moral rights and wrongs of hunting whales. With the human population increasing all the time, who should decide what sources of food are acceptable, and based on what standards? In an age when homogenized global values are reaching the farthest corners of the world, how should we regard the cultures and traditions of regions that are pushing back against them? Do we come down on the side of global norms or support localism and regional diversity?

All of us have different values, depending on our nationality, religion, and cultural background. We do not always necessarily have to understand and agree with these different values. But we do need to accept that they are different. Rather than trying to drive out difference, perhaps we should learn to coexist peacefully. Japan should continue to engage in dialogue with the rest of the world, and be persistent in insisting that this is the true meaning of diversity. The attempt to achieve coexistence at the IWC may have ended in failure. But in our daily lives and everyday society, we must not let up in our efforts to learn to understand one another better despite our differences.

(Originally published in Japanese on March 8, 2019. Banner photo: A minke whale is brought ashore in Kushiro, Hokkaido on September 4, 2017: a product of Japan’s controversial “scientific whaling” program in the northwest Pacific. © Jiji.)