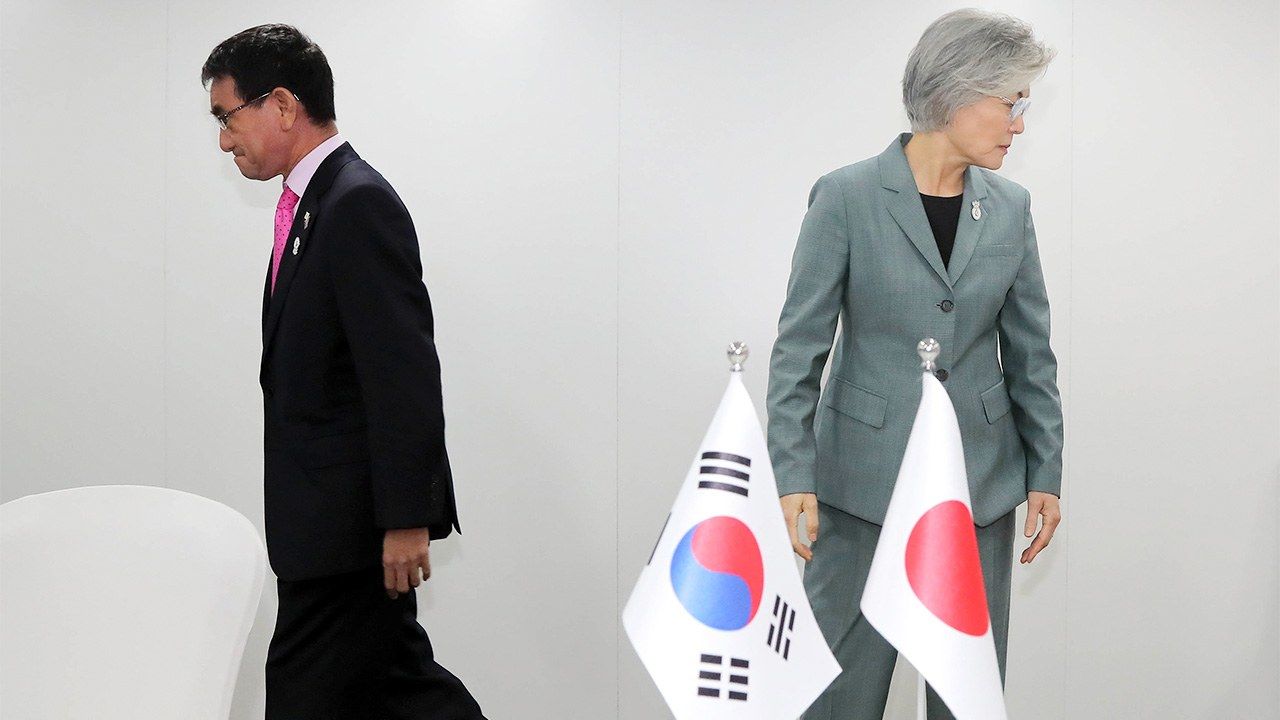 Politics Economy Sep 12, 2019
Japan’s announcement that it is revamping its export control policies has further aggravated already battered ties with South Korea. The two nations have frequently sparred on the political stage, but a diplomatic row is now spilling over into the economic realm, signaling a new phase in relations.

Japanese and South Korean relations entered a new phase when the Japanese government announced on July 1 that it was going to “normalize” its export control measures, in effect curbing its trade with South Korea. The move linked a political conflict between the two countries with the economy in a way that has not been seen before.

While relations between Japan and South Korea have been deteriorating for a number of years, friction has primarily been in the diplomatic realm and has not seriously affected economic ties. When trade disputes have arisen, though, these have generally had little connection with politics.

However, the situation has started to change as political disagreements begin to spill over into the economic sector, worsening the downward spiral in relations.

Economic Clashes are Nothing New

There have been economic clashes between Japan and South Korea before. In fact, Japan currently has three cases under appeal with the World Trade Organization. Two concern South Korea’s anti-dumping duties on pneumatic transmission valves and stainless-steel rods, and the remaining case concerns South Korea’s subsidies for its shipbuilders that Japan claims are the equivalent of major export subsidies. Japan has requested bilateral talks as a first step toward resolving the issues.

In a separate case, South Korea in April won approval of its ban on imports of Japanese fishery products from some prefectures following the 2011 Fukushima nuclear disaster.

South Korea filed its own grievances with the WTO in a case of Japanese-imposed tariffs on DRAM (dynamic random access memory) semiconductors after Japan claimed that the South Korean government subsidized a manufacturer of the chips. South Korea also took action against Japan for setting quotas on imports of nori (dried seaweed).

Up until now, the two countries have been able to keep their diplomatic tiffs from affecting trade. No matter how relations might deteriorate, maintaining economic ties was considered mutually beneficial.

Needless to say, profits are a corporation’s primary concern. As a business strives to maximize production processes and optimize profits, it will seek to procure parts and materials by building a global value chain encompassing manufacturers at home and abroad.

Companies in Japan and South Korea are no exception to this, and firms in both countries readily supply and procure parts and materials. In 2018, Japan was South Korea’s fifth largest export market at $13.7 billion and second largest partner for imports at $28.8 billion. South Korea depends heavily on Japan for a number of strategic parts and materials essential in the production of semiconductors, a major export of South Korea.

Within the global value chain, the bonds between Japan and South Korea have been especially strong; not because they are neighboring countries but rather because their respective corporations have made the most practical and appropriate choices for procurement and supply. In the economic sector, at least, this has helped to preserve the ties between the two countries, ensuring mutually enhanced productivity and optimum profits. 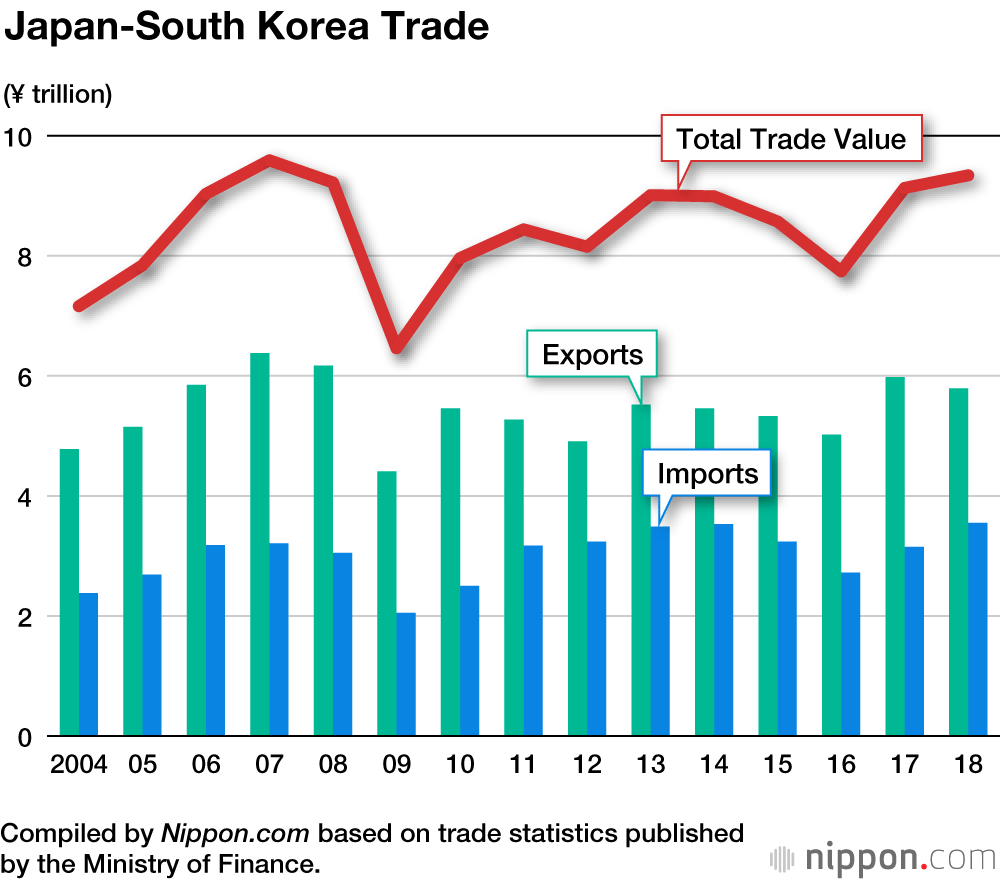 Corporations must abide by government-imposed regulations and strive to maximize their profits within that framework. When political circumstance influence the enforcement of trade rules, though, the economic sector suffers the effects.

The Japanese government framed its decision to tighten export controls as a security issue. However, the move was largely seen as retaliation against Seoul’s  failure to handle recent rulings by South Korean courts ordering Japanese firms to pay reparations to Korean nationals forced to work during the decades Japan occupied the Korean Peninsula.

Export controls are implemented on the basis of international trust. As its relations with South Korea worsen, Japan has decided to revoke South Korea’s favored nation status and apply the usual export controls. South Korea, however, has strictly interpreted it as a tit-for-tat move.

Under the terms of Japan’s tightened export controls, certain items require an export license for each contract, including materials essential for semiconductor manufacturing, a product that accounts for more than 20% of South Korea’s exports.

South Korea perceives Japan’s measure as a threat to its own domestic economy and is scrambling to wean itself from its dependence on Japanese sources for parts and materials, further proof that diplomatic friction is having economic repercussions on Japan-South Korea relations.

Japan’s “normalization” of its export controls does not mean it is banning all exports to South Korea. The Japanese government says that exports will not stagnate so long as there are no security concerns, and that screenings will be fair and rational. Case in point, after the tightening of export controls Japan on August 8 granted Japanese firms permission to export to South Korea. This suggests that although procedures for securing export permission may be more complicated than before, Japan’s “normalization” of its export controls is unlikely to have a profound effect on the South Korean economy. The cost of the extra procedures is much less than the cost would be of procuring the same parts and materials from another country, and certainly much less costly than building domestic sources from the ground up. For South Korea, the rational conclusion is to continue importing from Japan.

For its part, the Japanese government cannot implement its export controls in an arbitrary fashion. Corporations are guaranteed a certain degree of liberty in their operations and there must be a clear rational for attempting to curtail this freedom. This is why agencies that enforce Japan’s export controls have justified the decision based on national security concerns.

The Japanese government has acknowledged that the deteriorating relations with South Korea are partly to blame for the decision to change its export control categories and require separate export licenses for each of the three semiconductor-related items. At the same time, however, it insists that worsening bilateral relations will have no impact on the screening of individual export applications, which it claims will be judged solely on the basis of national security.

South Korea has taken quite a different view, though. The tightening of Japan’s export controls has forced South Korea to acknowledge its heavy dependence on Japan for parts and materials essential for the semiconductors and has raised public awareness  to the fact that the vital domestic industry is in many ways at the mercy of Japan.

In this respect, Japan looms as a major risk for South Korea and the only rational thing to be done is to avoid this risk by weaning itself of its dependence on Japan, even if that can only be done at great cost. Based on this reasoning, the South Korean government is likely to heavily fund efforts to create domestic production of the required parts and materials, and South Korean corporations can be expected to cooperate with this government policy.

The Slow Unraveling of Economic ties

There is no indication that relations will improve anytime soon. South Korea will continue demanding that Japan reverse its decision to tighten export controls, something Japan is unlikely to do unless Seoul acts to resolve the forced-labor issue. However, South Korea is not likely to take action without Japan first showing willingness to reconsider its export control policies. The two sides are at an impasse that looks set to continue for the foreseeable future, further eroding economic ties.

On August 2, South Korea’s National Assembly approved a 237.2-billion-won supplemental budget (around ¥25.0 billion) to implement measures for domestic production of semiconductor parts and materials. Just because a budget has been allotted for this specific purpose does not mean that domestic production will take off, but the South Korean government will probably continue to provide funding until it does.

South Korean companies are unlikely to profit from this investment and the more rational thing for firms to do is to continue importing the required parts and materials from Japan. Given that South Korea perceives Japan as high-risk, however, companies, with the help of government subsidies, will probably apply their resources to achieving domestic production.

There is also a movement to procure parts and materials from other countries, even though there is the risk that these will be of lower quality than what Japan can provide and will lead to additional costs to cover defective products. South Korea, however, will see this as a necessary cost of getting around the need to import from Japan.

These efforts will gradually reduce South Korea’s dependence on Japan for semiconductor parts and materials but will also impose a heavy burden on the South Korean economy that will impact the Japanese economy. Unfortunately, Japanese and South Korean leaders appear unwilling to avert such an outcome.