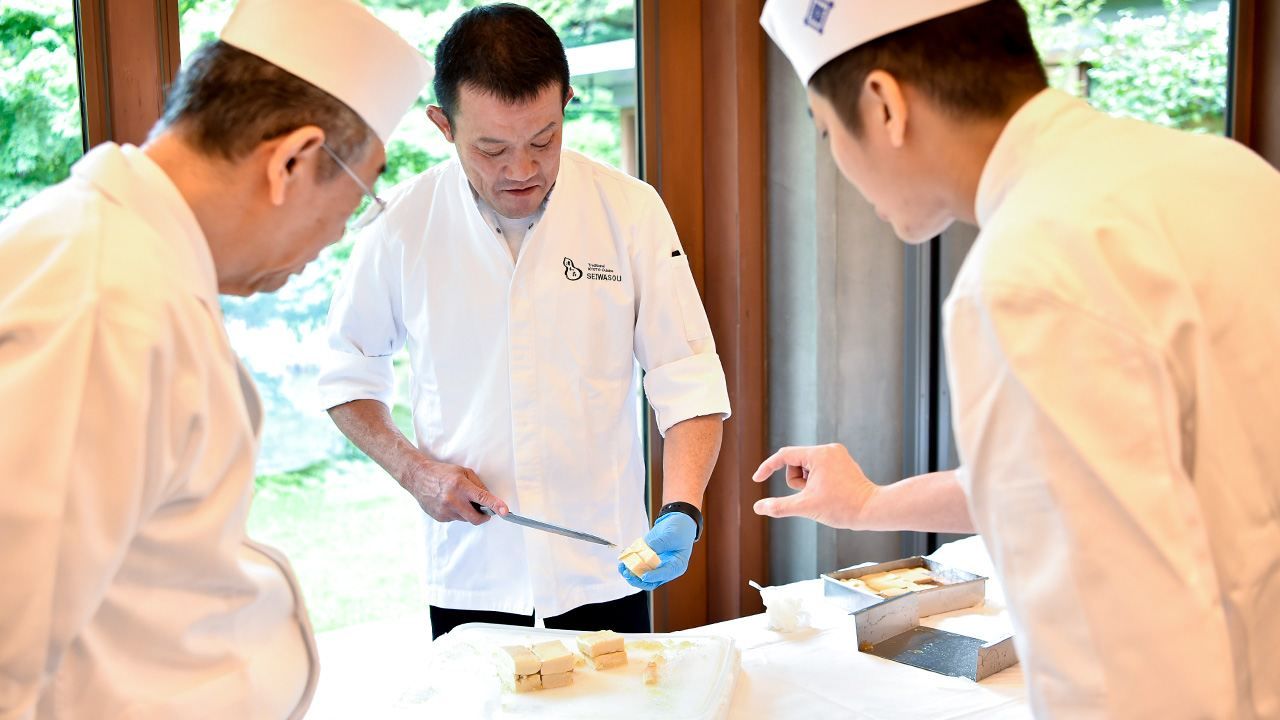 Food Science with a Kyoto Flavor

Culture Lifestyle Food and Drink Oct 8, 2019
The Japan Society for Innovative Cuisine brings together researchers and some of Kyoto’s top Japanese chefs to apply modern scientific methods to their traditional culinary creations. An anthropologist takes a look at the group’s innovative—and delicious—activities.

When I began my research as a PhD student in anthropology on the Kyoto brand for food and agricultural products in the context of globalization, I interviewed farmers, local officials, tea blenders, and consumers. But chefs, because they seemed inaccessible, were not on my list. After all, introductions are critical in Japanese society. Some elite restaurants have a reputation for an ichigensan okotowari policy, whereby newcomers are not welcome unless they are accompanied by a known customer. Moreover, thanks to changes in media and society, the chefs of well-regarded restaurants are now often celebrities.

Little did I know that the chefs in Kyoto’s traditional restaurants were proactively engaged in outreach, a key component of which included their collaboration with food scientists. Fortunately for me, this included an openness to foreign anthropologists. In 2012, through my affiliation with Kyoto University, where I was a research student, I was invited to sit in on meetings of the Japan Society for Innovative Cuisine.

The JSIC (Nihon ryōri raboratorī in Japanese), organized by a Kyoto-based nonprofit organization, the Japanese Culinary Academy, is a group of chefs and researchers from the Kansai area who meet one evening every month to discuss culinary experiments focused on a common theme. Since its first meetings in 2009 and its official establishment in 2011, the group has covered topics such as separation (using technology including high temperature water vapor, a reverse-phase column, and a centrifuge), abalone and temperature, and gels and texture, as well as more abstract themes like “the borders of Japanese cuisine.”

At meetings of the “Labo,” as its members affectionately call it, chefs sit at a table with natural science researchers to discuss—and taste—their experiments as they relate to the predetermined theme. Deliciousness, while clearly appreciated by all involved, is not the simple end goal of each session. Indeed, I was told that Chef Murata Yoshihiro (of the restaurant Kikunoi) teased several of the younger chefs for playing it safe and coming up with overly delicious dishes in their initial experiments. The purpose of the Labo is for chefs and researchers to use science to produce knowledge about traditional cuisine that can help chefs to nurture a culture of culinary innovation in addition to creating more delicious dishes. In the Labo chefs usually prepare dishes that they would never serve in their restaurants. Dishes that come to mind are a super bitter curry (with ingredients such as bitter melon and hop pellets), a vegan tonkatsu sandwich, and oxtail prepared so as to taste as close to Kyoto cuisine as possible. 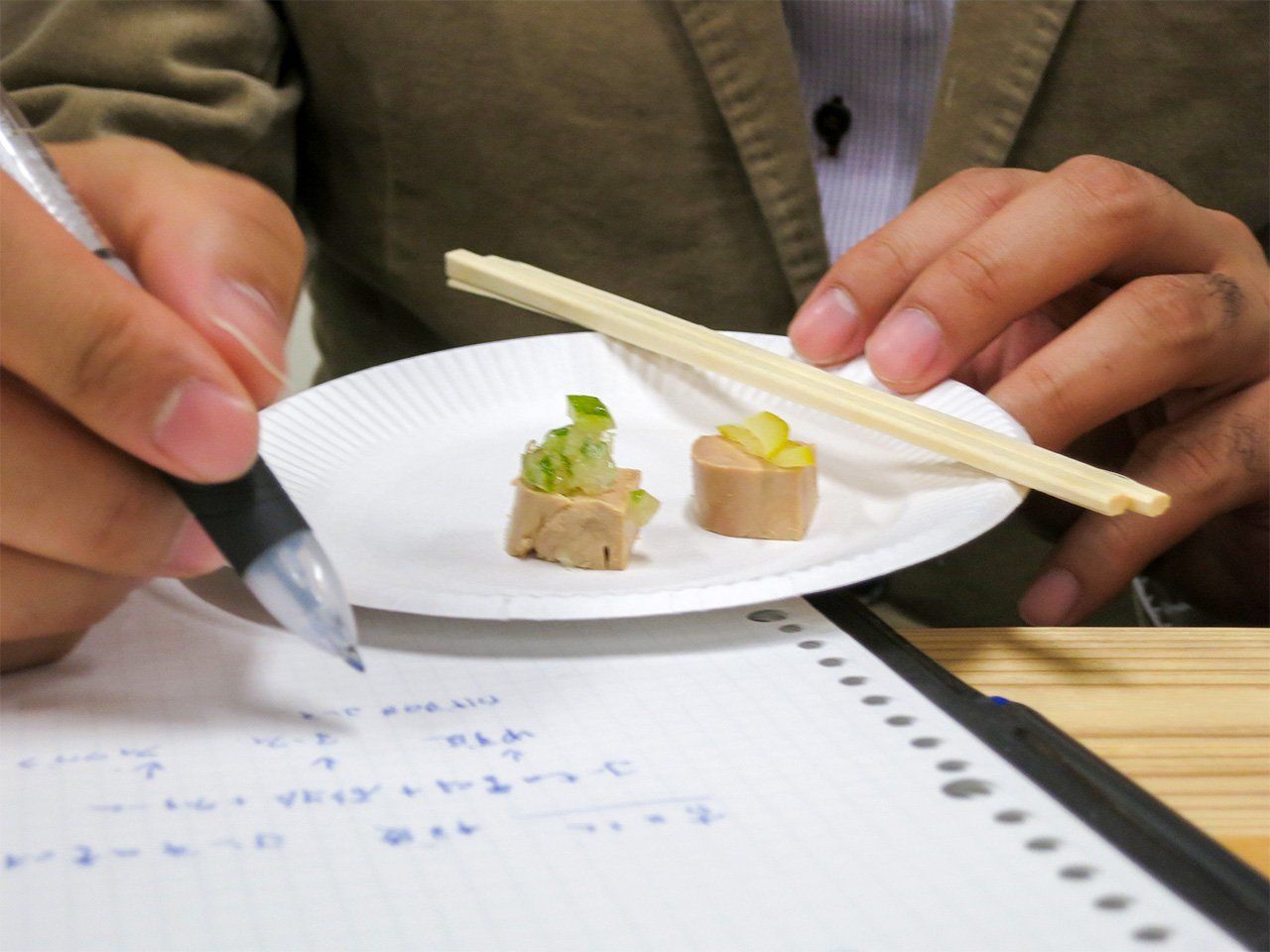 A number of the chefs have chosen to further engage with science by pursuing graduate degrees that complement the professional knowledge and skills they gained in their culinary apprenticeships. Chefs Nakamura Motokazu (Isshi Sōden Nakamura), Saiki Mitsuru (Jikishinbō Saiki), and Takahashi Takuji (Kinobu) have received master’s degrees from Kyoto University’s Faculty of Agriculture. Chef Takahashi’s thesis studied the pacing of courses in kaiseki cuisine and their physiological effect on customers. A new cohort of chefs is currently enrolled in a new program at Ryūkoku University under the guidance of Professors Fushiki Tōru, well-known for his research on umami and palatability, and Yamazaki Hanae. Chefs Nakamura, Saiki, and Takahashi have even presented their research findings at international conferences.

Creative Exploration with a Scientific Edge

Let me give you an example of the Labo’s approach. One traditional way to prepare abalone for a Kyoto kaiseki meal is to steam it for 3 hours. The Labo members wondered why this might be the case and if there might not be a more efficient or delicious way to prepare it using the technology that exists today, especially for precisely controlling temperature. How about cooking it at a lower temperature for a longer period of time? Chefs tried cooking it for 8 hours at 50 degrees, 55 degrees, 58 degrees, and 60 degrees; steaming it for 9 minutes and steaming it for 3 hours (the culinary control, if you will). They compared the results, rating them in terms of likability, “abalone-ishness,” smell of the ocean, fishy taste, and texture. The results from this experiment showed that an alternative that was perhaps even preferable to the traditional steaming method was sous vide cooking at 60 degrees for 8 hours. Cooking at lower temperatures, however, didn’t even come close in terms of the desired characteristics of “abalone-ishness” and likability. Building on this knowledge, individual chefs then went on to experiment on their own to find ideal ways of preparing abalone for different dishes. 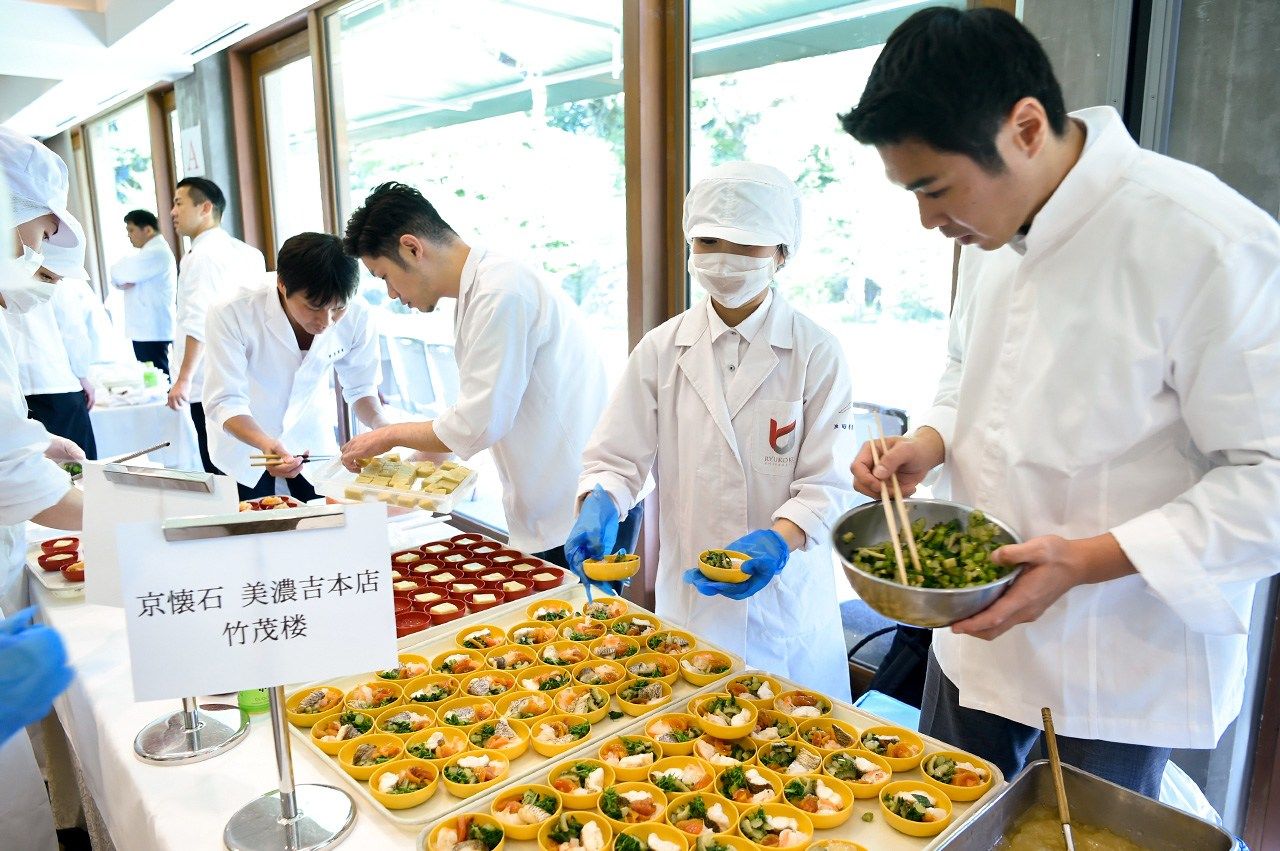 The JSIC brings chefs and researchers together to tackle a given theme over a year or so, gathering regularly at Labo events to test and discuss their work. Participant Satake Yōji (right) prepares samples for tasting at a 2017 JSIC symposium in Tokyo. (Courtesy Ryūkoku University)

Like the Labo members, chefs around the world have found that scientific knowledge and tools can help them change cuisine in beneficial ways. In the early 1990s, researchers Hervé This and Nicholas Kurti worked with chefs Ferran Adrià (El Bulli) and Heston Blumenthal (The Fat Duck), among others, even receiving financial support from the European Union for their ambitious endeavors in culinary science. The resulting cuisine has been labeled “molecular gastronomy”—though many of these chefs reject the term, originally created as a name for the field of study itself. More recently, René Redzepi and Claus Meyer (both of Noma) created the Nordic Food Lab in 2008 as a place for discovering ways to use resources from the Nordic region to create delicious food. In 2014, the Lab became a co-venture with the University of Copenhagen’s Department of Food Science, which now runs it as the Future Consumer Lab.

Likewise, the Japan Society for Innovative Cuisine was formed to learn about culinary techniques from a scientific perspective with the aim of making dishes more delicious and varied and meals more satisfying. As with similar groups across the globe, the Labo is based on intellectual exchange between scientific researchers and culinary specialists.

Innovation in the Cause of Tradition

Yet one key difference is that chefs in the Labo aim to bolster tradition rather than create a new cuisine. One of the members explained it to me by saying “We’re using science to make Kyoto cuisine more delicious. We’re not using science just for the sake of science.” This difference became all the more evident to me after I spoke with Chef Namae Shinobu (L’Effervescence). Namae is a regular Labo participant, though he is a chef of French cuisine in Tokyo. He doesn’t envy the majority of the other chefs in the Labo because they have inherited generations of tradition—and while they can, and do, innovate, they are expected to keep their restaurants’ menus in line with what they were like in the past. After all, these are family-run restaurants and family, staff, and customers all have expectations about continuity. In contrast, Chef Namae explained that when it comes to L’Effervescence, which regularly makes lists of the top restaurants in Asia, “I don’t care about the tradition of this restaurant.” 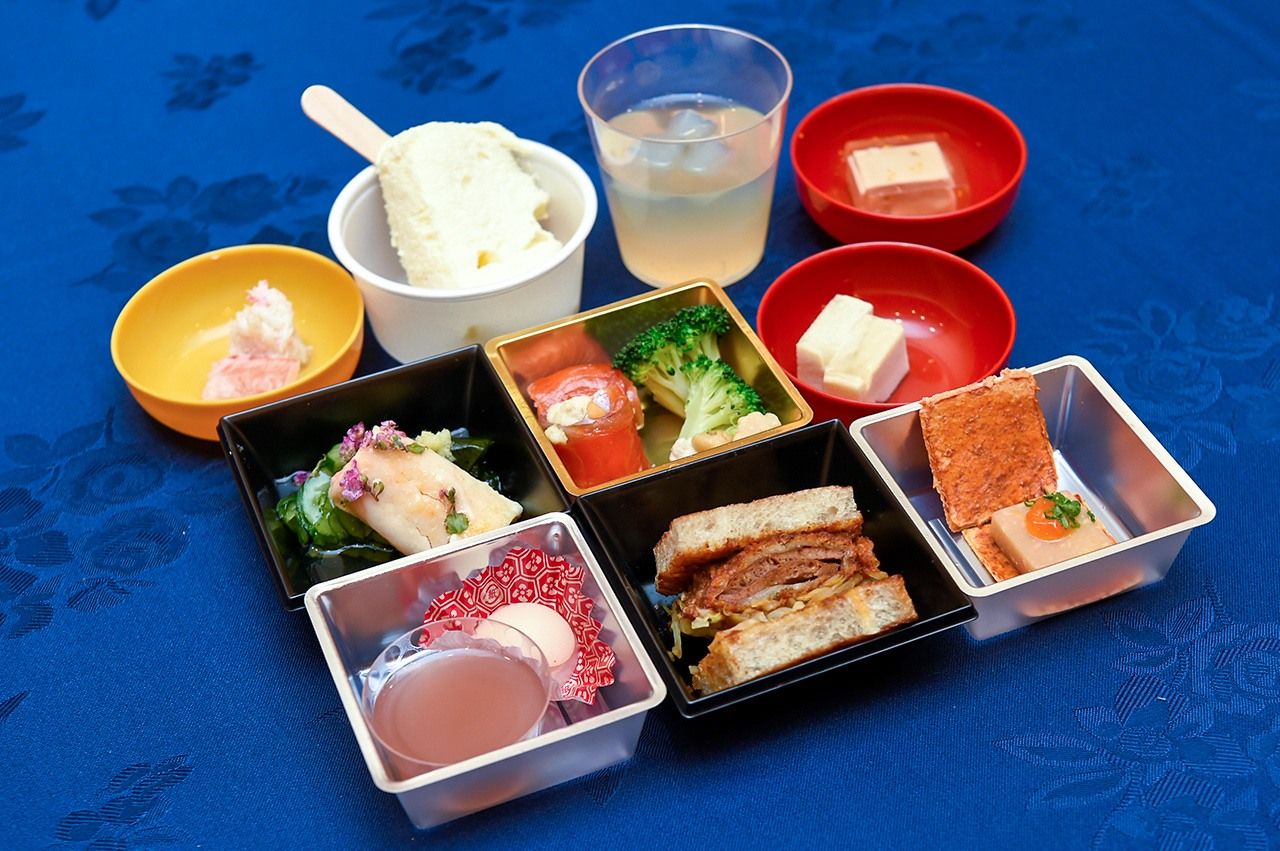 A range of samples tested at a Labo event focusing on shokkan, the “mouthfeel” of the food. (Courtesy Ryūkoku University)

Chefs in the Labo are not opposed to change. Indeed, as Chef Shimoguchi Hideki (Chikurin) once put it, “Kyoto cuisine is modern. Looking back, it is classic.” As he stresses, “Change and play have been a part of Kyoto cuisine from the start.” Many of the other chefs in the Labo hold a similar view of tradition. Chef Nakamura puts it this way: “Tradition includes past changes,” even breaks with the past. For him, chefs have to implement changes in order to keep their cuisine from becoming stale and out-of-date.

A dish that Chef Shimoguchi created for the Labo’s 2015 symposium represents this perspective well: milt (male roe) with a butter and soy milk bechamel sauce, served in a yuzu “bowl.” This dish was widely felt to capture the 2015 Labo theme of “the boundaries of Japanese cuisine.” It pushed the boundaries through its incorporation of a rich, butter-laden French sauce, but was largely felt to be anchored in Japanese culinary territory by the fragrance of yuzu, which lingered after each taste. 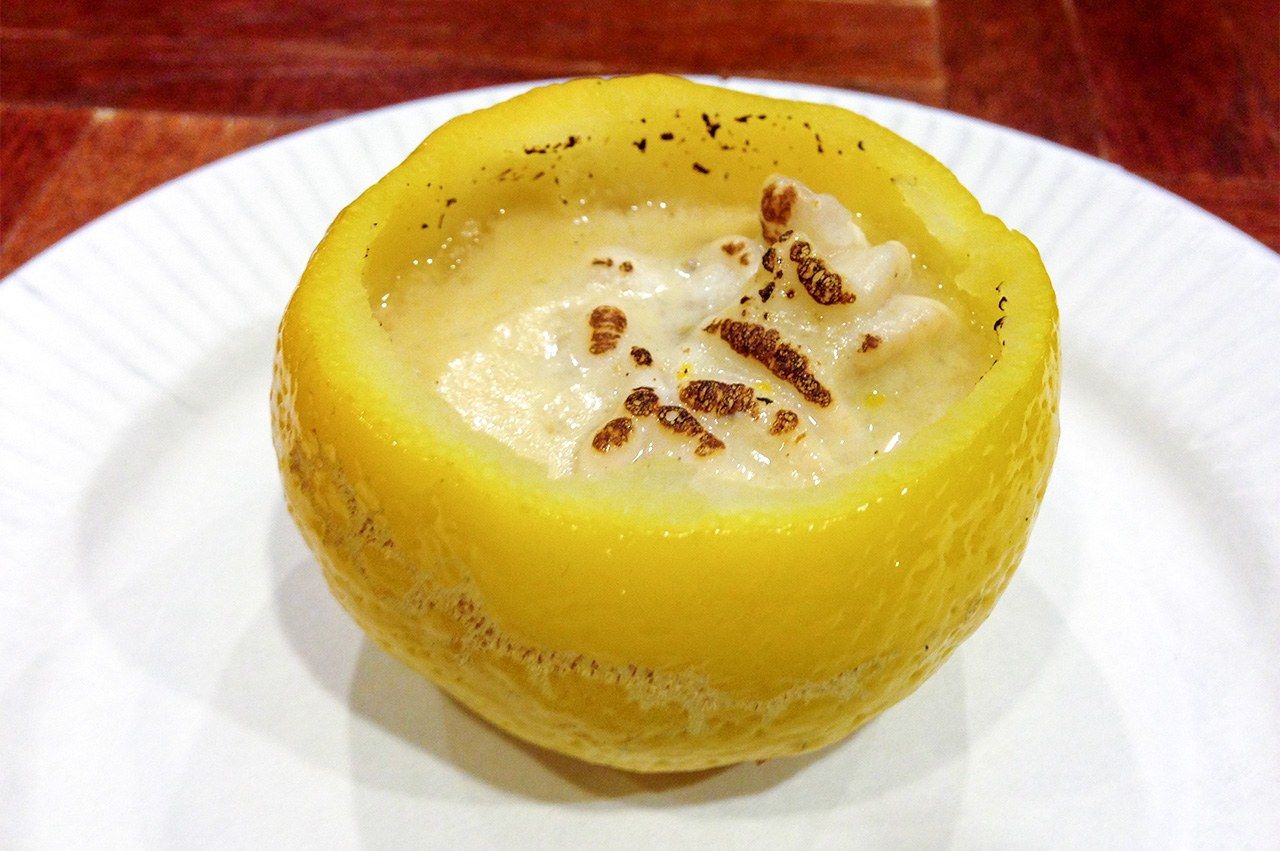 Given the positive reception this dish enjoyed at the public symposium, one might expect Chef Shimoguchi to have added it to his menu. Yet when I spoke to him months later, he told me that he couldn’t serve the dish at Chikurin, at least not without significant modifications, such as removing the butter. While the dish itself was considered a success, the richness of the butter makes the dish unimaginable as a course on a full kaiseki menu, since it would inhibit the eater from fully appreciating the subtle tastes and flavors in dishes that would follow it. If anything, Shimoguchi said, “It might be the future of Japanese cuisine.”

This year the Labo has chosen the theme of hin’i, the difficult-to-translate aesthetic of refined elegance and sophistication. In February 2020, chefs will present the results of their newest experiments—with samples—in Kyoto.