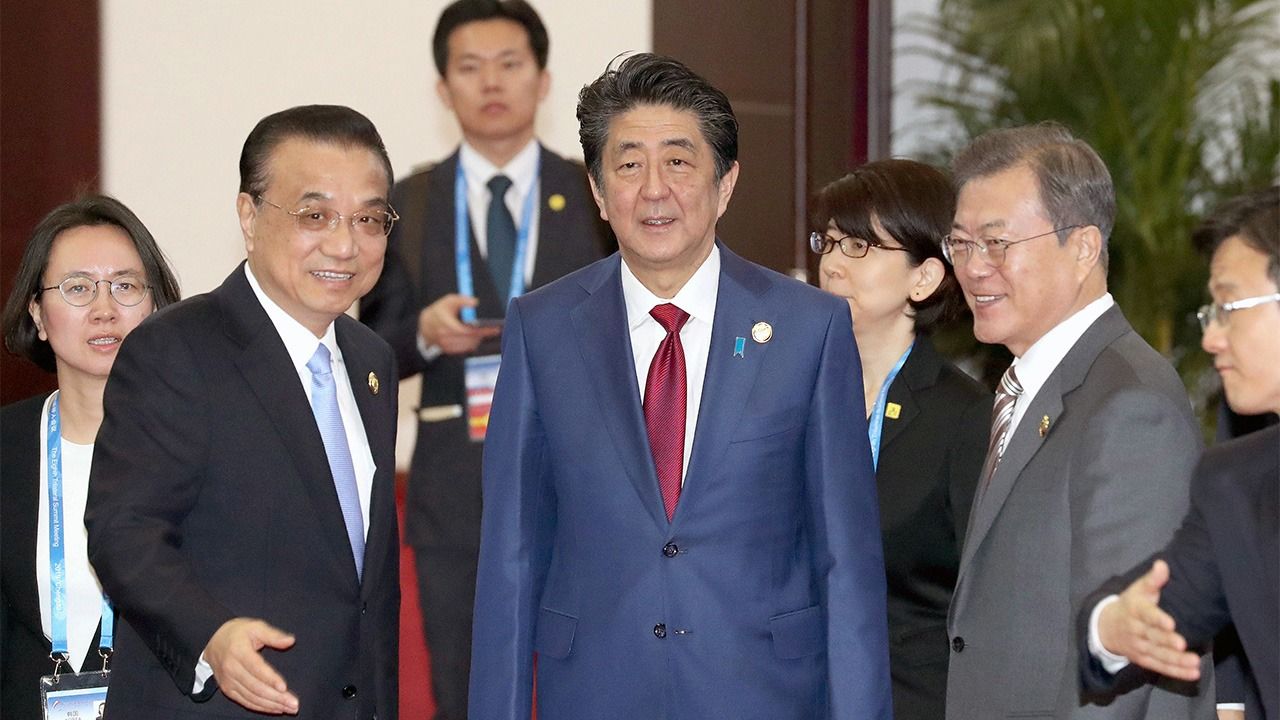 Japanese Politics in 2020: All Eyes on the Prime Minister

Politics Jan 6, 2020
Dogged by scandal and stymied in his drive to revise the Constitution, Prime Minister Abe will need to maneuver skillfully in the year ahead to avoid becoming a lame duck. Fujino Kiyomitsu reviews Abe’s strategic options going into 2020.

After stumbling during his first stint at the helm of the ruling party, Abe Shinzō staged a stunning comeback in 2012, and in 2019 he became Japan’s longest-serving prime minister. He has also become one of its most powerful, with no serious challengers inside or outside of the ruling Liberal Democratic Party. Nonetheless, 2020 could prove a turning point, as Abe struggles to deliver on his signature issue—revision of the postwar Constitution—in the wake of damaging scandals. Will he use his powers to dissolve the House of Representatives and seek a new mandate? And if so, when? Once again, all eyes are on the prime minister.

Fallout from the Cherry-Blossom Scandal

The annual taxpayer-funded cherry-blossom-viewing party, hosted by the prime minister, turned into a major embarrassment for Abe amid ballooning expenses, accusations of rank favoritism, and the mysterious disappearance of the guest list (including electronic data) for last year’s event. The opposition parties have zeroed in on the issue as a symbol of arrogance and cronyism in Abe’s deeply entrenched power circle, and the impact on public opinion has been significant. In a December opinion poll by Jiji Press, support for the Abe cabinet was at 40.6%, down 7.9 points from the previous month—the largest drop since March 2018, when the cabinet’s approval rating fell 9.4 points amid the uproar over document tampering by Ministry of Finance officials in connection with the Moritomo Gakuen scandal.

The ruling party’s legislative agenda for the fall 2019 extraordinary Diet session collapsed amid opposition grilling over the cherry-blossom scandal. The government canceled the 2020 party, and Abe’s ordeal came to a temporary halt with the close of the Diet session on December 9. In a press conference the same day, the prime minister expressed regret over the swollen guest list and vowed to take personal responsibility for a wholesale review of the process to ensure transparency. But the opposition was not so easily mollified. The Constitutional Democratic Party and other minority parties have slammed Abe for his weak response to demands for disclosure, including recovery of the deleted digital copy of the guest list, and have vowed to resume their cross-examination in the lower and upper house budget committees (where the prime minister is required to respond directly and publicly to lawmakers’ questions) once the Diet reconvenes on January 20.

Abe also faces fallout from the December 25 arrest of LDP House of Representatives member and former senior vice minister in charge of the government’s casino policy Akimoto Tsukasa on charges of taking bribes from a Chinese company looking to develop an integrated resort in Hokkaidō. The government has promoted IR as a pillar of its growth strategy, but the scandal raises serious question about bidding for projects.

Over the past seven years, Prime Minister Abe has demonstrated his ability to bounce back from adversity. Support for his cabinet has plunged several times as a result of scandals and unpopular policies, including controversial defense legislation. But each time, Abe and his team have used strategically timed snap elections, new policy initiatives, and other political tactics to control the conversation and shore up his power base. This helps explain how Abe has become the longest-serving prime minister in Japanese history, breaking the record previously set by Prime Minister Katsura Tarō in the early twentieth century.

Still, Abe’s third and (under current bylaws) last term as president of the LDP ends in September 2021, and some members of the party are privately wondering if the latest scandals will not render him a lame duck. What can he do to avoid such a scenario?

Planning for the Next Snap Election

Since returning to power in December 2012, Abe has made the most of the prime minister’s power to dissolve the House of Representatives and call a general election before the members’ terms are up. He called snap elections in December 2014 and again in October 2017, in both cases taking advantage of the opposition’s disarray. Asked in recent months if he was contemplating another such maneuver, the prime minister has responded that he would not hesitate to dissolve the lower house if he felt the time had come to seek a new mandate. Coming from Abe, who had previously called a snap election the furthest thing from his mind, that sounded like a yes. But opinion is divided as to whether and when to expect such an election.

Some believe it could come as early as February. In December, the cabinet approved a ¥26 trillion stimulus package focused on disaster relief and infusions aimed at countering the risk of weakening external demand. The scale of the package, which has been criticized as excessive, appears to have ballooned in response to pressure from LDP politicians hoping to appease voters in advance of the next House of Representatives election (no later than October 2021). Some observers speculate that Abe plans to shift the conversation away from the cherry-blossom debacle and pass a supplementary budget to fund the stimulus as soon as the Diet reconvenes in January, then dissolve the lower house and call an election while his approval rating is on the rebound. At a CDP executive meeting in December, party leader Edano Yukio urged the opposition to prepare for a February election.

Within the ruling bloc, however, only a few politicians seem to regard that as a serious possibility. After all, it was just last October that the government pushed through a highly unpopular consumption tax hike, and the full extent of its impact on the economy is yet to be determined. Public support for the Abe cabinet has been sinking in all the polls, and it seems unrealistic to hope for a turnaround by February. The prevailing view within the LDP is that Abe’s intimations that a snap election could be right around the corner are only meant to deter the opposition from digging in and junior LDP politicians from falling out of line.

Most LDP politicians are convinced that Abe will wait until after the Tokyo Summer Olympic Games to dissolve the House of Representatives. This raises the question: With the LDP holding a solid majority in the lower house, why call an early election at all?

Strategies for Building a Legacy

Asked what he would like to achieve during his final term in office, Prime Minister Abe has enumerated three items of unfinished business important to his conservative base: revising the Constitution, securing the return of the Northern Territories, and achieving a breakthrough with Pyongyang on the issue of the abduction of Japanese citizens by North Korean agents in the late 1970s and early 1980s.

The last two of the three are diplomatic challenges requiring the cooperation of unfriendly foreign leaders. Japan and Russia are at odds over the basic conditions for peace-treaty and territorial negotiations. North Korean leader Kim Jong-un shows no sign of responding to Abe’s overtures for a summit to address the abduction issue.

Revision of the Constitution is a domestic matter. But it faces formidable obstacles as well.

Legislation for a constitutional referendum was supposed to be taken up in the fall 2019 extraordinary session of the Diet, but it was derailed by the cherry-blossom scandal. The top opposition party, the CDP, is dead set against revision, and the LDP’s junior coalition partner, the Kōmeitō, continues to express reservations. If Abe wants to take credit for Japan’s first constitutional revision since 1947, he must negotiate a draft that can win a two-thirds majority in both houses of the Diet, push the necessary legislation through the legislature, and have the revision approved by national referendum, all by September 2021. An additional year or so would probably be required for the revised Constitution to take effect. The timetable has become all but impossible. Yet the prime minister insists that he remains committed to finishing the task before he steps down.

The fact is that Abe can ill afford to abandon his campaign for constitutional revision, because to do so would alienate his conservative base and severely weaken his control over the ruling party. Dissolving the House of Representatives if (as is likely) it fails to make progress toward that goal during the 2020 ordinary session would be a good way of demonstrating his commitment. This is why veterans within the LDP are betting on a fall election.

There is always a possibility that the LDP will revise its bylaws again to allow Abe a fourth term as party president. Although the prime minister himself has dismissed the idea, others in his circle have raised it repeatedly. In a recent interview, Deputy Prime Minister and Minister of Finance Asō Tarō said, “If we really want to revise the Constitution, we have to be willing to consider a fourth term.” LDP Secretary General Nikai Toshihiro (at whose initiative the term limit was recently extended from two to three) has mentioned the option on several occasions. One reason the possibility keeps coming up is that none of the candidates to succeed Abe—LDP Policy Research Council Chair Kishida Fumio, former LDP Secretary General Ishiba Shigeki, Chief Cabinet Secretary Suga Yoshihide, Minister of Defense Kōno Tarō, or Minister for Foreign Affairs Motegi Toshimitsu—has a decisive edge over the others.

Past events suggest that, were Abe to lead the ruling party to another major victory after dissolving the House of Representatives, LDP support for a fourth term could surge dramatically. If drafted, Abe might or might not accept. But to pursue the constitutional campaign into a fourth term, he first needs to call an early general election and receive a new mandate.

On the other hand, a few in the party have suggested that the prime minister might lower his sights a bit and, contenting himself with getting a referendum bill through the current Diet, leave the rest of the job to the next LDP president. In that case, he might be expected to resign before his third term wraps up so as to give his successor a chance to prepare for an October 2021 general election. If a general election came too soon after the party election, the LDP could suffer at the polls. This has prompted murmurs among some in the party that if Abe were to step down early, it would be best to speed up the process of selecting his successor by limiting voting to LDP members in the Diet and regional legislative bodies in lieu of a full-fledged leadership election. (This would be particularly preferable in the case where someone like Ishiba, who has been critical of the present administration, looked likely to garner considerable support in the local chapter voting even while losing the overall contest, with the heavily weighted votes of Diet members going to his opponent.)

Having held the reins of government for more than seven years, Abe seems unlikely just to ride off into the sunset. Time is running out to build and cement a legacy, and it seems reasonably certain that Abe and his inner circle will be focusing their considerable strategic skills on that goal in the months ahead.