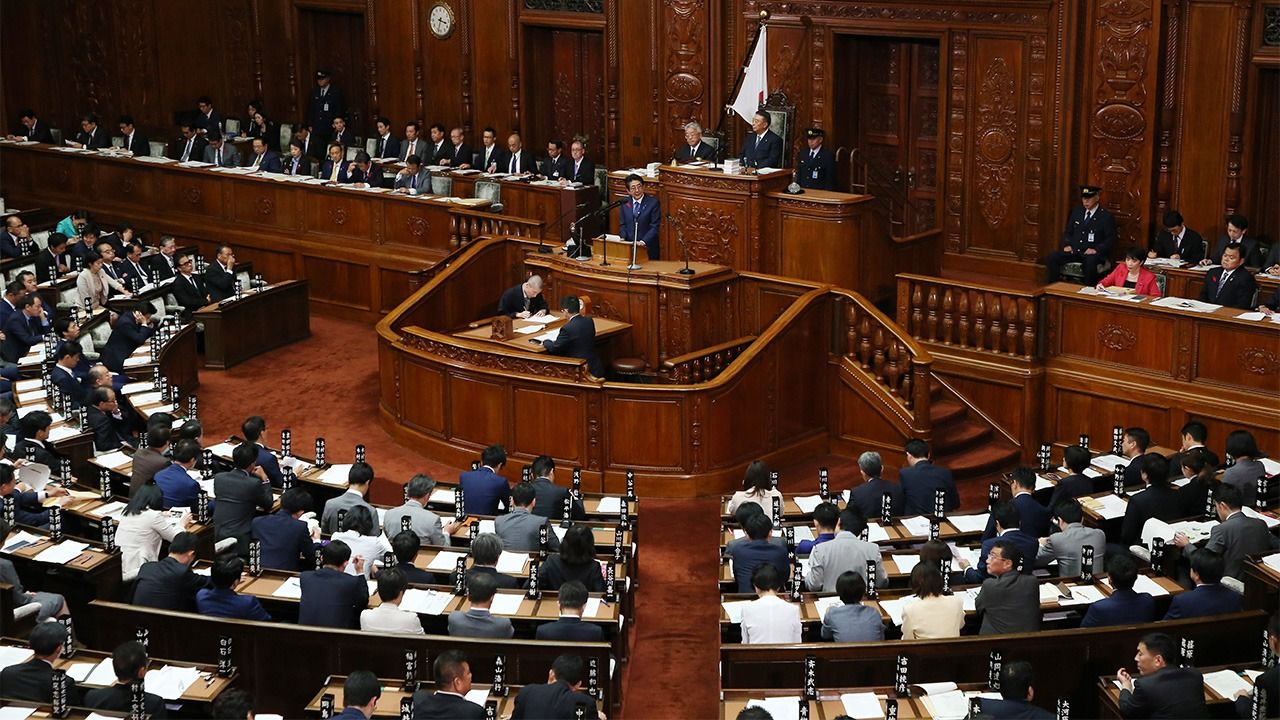 Untying the Knot of Japan’s Bureaucratic and Diet Dysfunction

Japanese democracy observed a milestone in October 2019, when the National Diet convened for its 200th session. Unfortunately, the two-month extraordinary session was dominated by opposition grilling over government scandals and bureaucratic malfeasance, leaving important policy issues on the back burner.

The Diet session also called attention to the extraordinary pressures that are causing young bureaucrats—and those contemplating such a career—to question whether the benefits of a job in government are worth the costs. Even with a massive typhoon approaching Tokyo, civil servants remained holed up in their offices in Kasumigaseki, frantically preparing their ministers’ responses to questions from opposition politicians.

The problems afflicting Japan’s legislative and administrative branches are structurally related. In the following, I would like to trace their origins and clarify their connections in an effort to light the way to a solution.

The Bureaucracy: From Leaders to Lackeys

At one time, the Japanese bureaucracy was regarded as a model of organizational autonomy, technical expertise, and policy leadership. Today, it is more often associated with the phenomenon of sontaku, the apparent willingness of senior administrators to cast aside ethical standards in their rush to curry favor with the prime minister and his cronies. To understand this transformation, we need to examine the changing relationship between the administrative and political spheres in the period since 1955, when the Liberal Democratic Party came to power.

The first and most obvious aspect of this relationship is the system of collaboration that developed between the bureaucracy and the ruling LDP under the so-called 1955 system, which persisted until 1993. The key institutional component of this relationship was the LDP Policy Research Council, whose organization mirrored that of the government’s administrative apparatus. The “tribes” of LDP lawmakers, or zoku giin, appointed to each division of the Policy Research Council lobbied on behalf of specific industries and other interests, serving as a link between those interests and the government agencies with jurisdiction over them. Although bureaucrats of each ministry took the lead in the process of crafting policy and drafting laws, all legislation had to be vetted and approved by the relevant committees of the Policy Research Council before the cabinet could submit it to the Diet. This close collaborative relationship made use of the abilities of Japan’s elite, highly educated bureaucrats while upholding the democratic principles of the postwar Constitution, under which the democratically elected Diet is the highest organ of the state. It was the price the bureaucracy paid for maintaining its influence.

But the principles of postwar democracy also insisted that the minority parties have a voice in government policy. With no prospect of wresting the reins of government from the LDP, the opposition asserted itself largely through Diet questioning, in which lawmakers grilled cabinet members, who in turn relied on the expertise of the civil service for their responses. Thus, while negotiating and coordinating with the LDP outside of the Diet, Japanese bureaucrats were also obliged to fence with the opposition during legislative sessions. In this sense, the power of Japan’s postwar bureaucracy during the 1955 setup—unlike that of the prewar era—was carefully circumscribed and subject to constraints from the elected politicians of LDP and the opposition alike.

However, the balance began to shift decisively during the turbulent 1990s, as the government decision-making apparatus came under mounting criticism for corruption, sectionalism, and inefficiency.  Beginning in the mid-1990s, with the cabinet of Prime Minister Hashimoto Ryūtarō, successive governments enacted a series of far-reaching administrative and civil-service reforms designed to strengthen "political leadership" in the form of top-down, centralized control over the bureaucracy and the policymaking process. The Cabinet Office, headed by the  chief cabinet secretary and the prime minister, was given the resources and authority to formulate and coordinate basic policy. These top politicians established completely new types of advisory councils consisting of both government and private-sector experts to draw up recommendations for legislation and other policy measures.

Last but not least, the prime minister and the chief cabinet secretary were given centralized control over the appointment and management of senior administrative personnel—a change of momentous importance for the autonomy of Japan’s civil servants and their relationship with the political sector.

Ministries and agencies were stripped of their former organizational autonomy. Now the fate of officials hung on the good opinion of the prime minister and chief cabinet secretary, who had the power not only to block appointments but also to deprive senior officials of authority and prestige simply by denying them a place on a policy council. The reforms dramatically weakened the clout of the bureaucracy, as well as its symbiotic relationship with the LDP, and placed Japan’s administrators in a position of absolute subservience to the prime minister’s office.

At the same time, the bureaucracy’s relationship with opposition politicians remained fundamentally unchanged. Civil servants still find themselves in the firing line during the opposition’s relentless and often hostile questioning in the Diet. In fact, Diet interaction between opposition politicians and civil servants has grown all the more fraught now that the latter are manifestly working for the prime minister and his cabinet.

In this sense, the current crisis facing Japan’s civil service relates directly to legislative procedures and systems that have taken hold in the Diet since the LDP took power in 1955. Nor is this the only consequence of the Diet’s peculiarities. Of course, the rules and customs governing parliamentary government vary from one country to the next, but there is no denying that Japan’s National Diet is among the most peculiar legislative assemblies in the advanced industrial world because  of the unique pattern of ”parliamentary rationalization” in postwar Japan.

The first peculiarity is the way that plenary sittings have been relegated to the status of a rubber stamp as Diet committees have taken over the deliberative process. This is especially evident in the small amount of time allotted to it—roughly 60 hours a year on average (in the House of Representatives). That is about one-twentieth of the time spent in Britain and France.

Almost all national legislatures feature a combination of committee and plenary deliberation, but in most countries the two play complementary roles in the legislative process. As a rule, the committees are tasked with gathering and evaluating technical information and ironing out differences in a collaborative spirit, while the plenary deliberations are the stage for impassioned partisan debate. In postwar Japan, this basic model has broken down. The plenary sessions have become pro forma, and the committees have taken over as the main arena for partisan posturing. As a result, the committees no longer perform their original legislative function, nor can they be expected to.

The second peculiarity is the inordinate amount of time devoted to question-and-answer sessions (shitsugi), as opposed to parliamentary debate. The difference is twofold. First, debate is a free exchange of views, while questioning is limited to specific queries prepared and submitted in advance. Second, debate typically takes place between legislators, while questioning (in Japan, at least), consists primarily of hostile questions posed by opposition politicians to cabinet ministers—who in turn may call on bureaucrats or private-sector experts to assist in delivering their response. This is partly because almost all the bills put before the Diet are government-sponsored bills, but it also reflects the opposition’s use of questioning to highlight real or alleged government misconduct. In either case, the questions are submitted in advance, and bureaucrats are given the thankless and time-consuming task of assembling the data and talking points needed to respond. (They are frequently required to appear in person as well.)

This question-and-answer format, which took hold during the years when the LDP was firmly ensconced as the perennial ruling party, lies at the heart of many of the systemic problems plaguing Diet deliberations. But any effort to change it meets fierce resistance, since it is the single most important institutional weapon at the disposal of an opposition with no prospects for winning an electoral majority.

Even more troubling is the third peculiarity of Diet deliberation: the fact that members of the ruling LDP play almost no part in it. Of course, the LDP accumulated great policymaking clout under the 1955 system, but it wielded that power almost exclusively through extra-parliamentary channels. In fact, the backroom negotiations of the Policy Research Council divisions have eliminated  open Diet deliberation for LDP legislators.

Currently, almost 70% of the time set aside for Diet questioning is allocated to the minority parties. While the opposition uses its time for ruthless interrogation, politicians of the ruling party seem to view their meager allotment as a burden. The result is that on average, contribution of LDP politicians to committee deliberation is a mere 5% of that from members of the Communist Party. In short, the role of LDP Diet members is simply to vote on the government-sponsored bills put before them—legislation that has already been vetted, revised, and approved by the party brass. The system simply leaves no room for serious deliberation or debate either in committee or in plenary sittings.

To review, the postwar Diet evolved as a body in which the ruling and opposition parties played their assigned roles, while the bureaucracy took the leading role in the process of formulating policy and drawing up legislation. The LDP, for all its attention to form and procedure, ceased to be an active or meaningful participant in the Diet, as the opposition took center stage. Moreover, it was the bureaucrats who were left to cope with the opposition’s grilling.

By correcting the overcentralization of administrative power in the office of the prime minister, it might be possible to create a healthier balance between our politicians and bureaucrats. This would help address the problem of sontaku and mitigate some of the pressures under which our civil servants are obliged to operate. But the problem of overworked, overstressed bureaucrats is inextricably tied to Japan’s dysfunctional Diet. And Diet reform is a difficult task requiring insightful and decisive political leadership.

As I have stressed, the context in which the Diet’s peculiar and anomalous workings evolved was the LDP’s monopolistic control of government. Despite the electoral reforms that helped sweep the LDP from power in 2009, a viable two-party system has yet to take hold in Japan. Under the circumstances, it is will be no easy matter to fundamentally change the way the Diet works. But we can start by understanding the origins of the problem and carefully studying the options for reform.