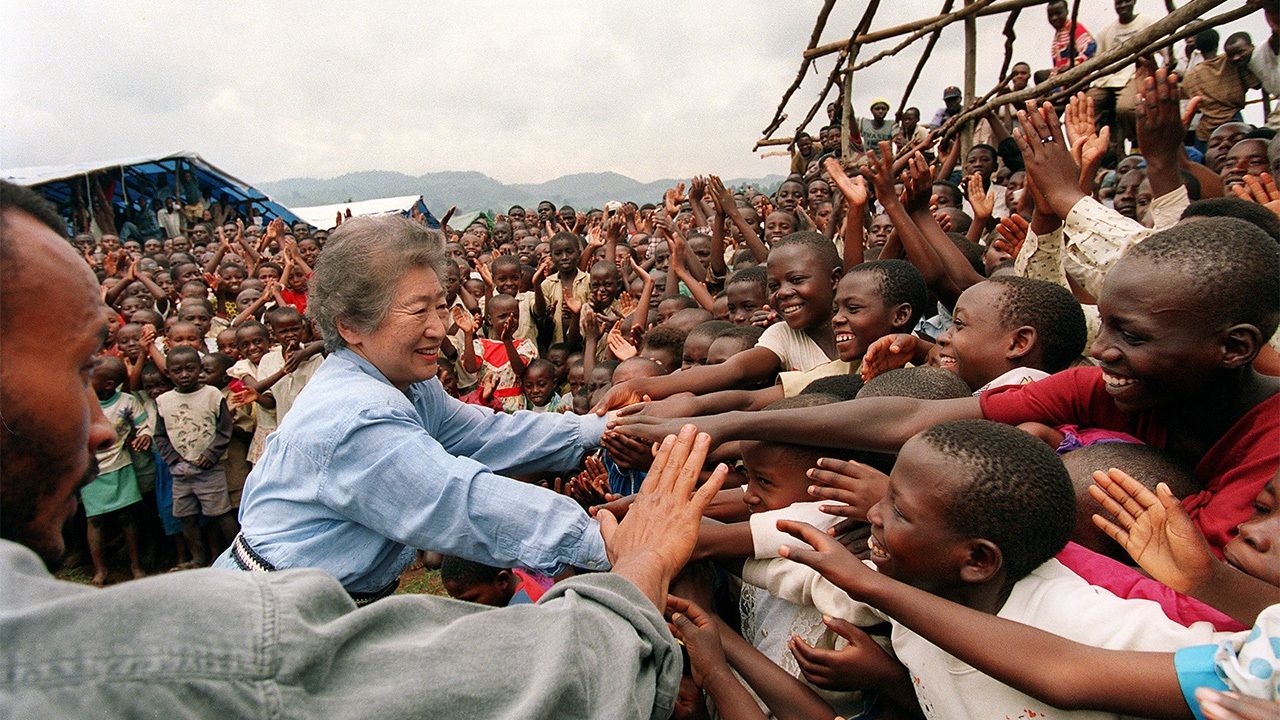 Lessons from Ogata Sadako on Internationalism in Japan

Politics Feb 27, 2020
As the first Japanese and first woman to serve as United Nations High Commissioner for Refugees, Ogata Sadako successfully dealt with humanitarian emergencies across the globe. This article explores Ogata’s perspectives on history, diplomacy, and national security issues.

In October 2019, messages of condolence flooded in from around the world at the news that Ogata Sadako, the former United Nations High Commissioner for Refugees, had passed away. I am not in a position to add another obituary on her work and life. Instead, the purpose of this piece is to examine Ogata’s thoughts and role as a distinguished scholar as well as practitioner in a broader context of Japan’s foreign and security policy—or in other words, it is about exploring the questions, concerns and challenges that Ogata has raised for us over decades through her work.

What distinguished Ogata was her unparalleled balance of humanism and realism. Looking back on her legacy, though, it is undeniable that what Ogata aimed for has largely failed to take root in Japan. As a result, paradoxically, her experience and expertise were sought after in the Japanese society until the very final stage of her life and Ogata herself became profoundly concerned about Japan and its future.

Ogata was a living repository of knowledge on prewar Japan as well as contemporary politics and diplomacy. As a student, she had attended the Tokyo War Crimes Tribunal, which she found “an imposition of victors’ justice to a defeated Japan.” In her 2015 memoir, Kikisho: Ogata Sadako kaikoroku (In Her Own Words: Ogata Sadako Memoirs), Ogata says that she “could not accept the notion that Japan’s expansion had stemmed from a grand conspiracy to invade the Asian continent.” People may be surprised to hear such a skeptical perspective on the Tokyo Tribunal, looks almost like a typical right-wing and conservative argument.

But she goes on to assert that “Japan’s diplomatic failures are evident from the Mukden Incident to the Sino-Japanese War and the Pacific War” and that “policymakers at that time were clearly responsible.” Motivated by this experience, Ogata wrote her PhD dissertation at the University of California, Berkeley, on the policymaking process leading up to the Mukden Incident. The fact that her great-grandfather Inukai Tsuyoshi (1855–1932), was prime minister of Japan from December 1931 until his assassination in the May 15 Incident, an attempted coup d’état by members of the military and ultranationalists, the following year, must also have played a role in her commitment to examine prewar Japanese history.

In addition to Ogata’s remarkable sense of balance from a young age, another distinguishing feature was her ability to bridge academic research and real-world issues. She argues that “research was useful for policy” and it is “nonsense” to “separate policy practice and academic research.”

It is easy to see Ogata as a liberalist in the classical sense, but as her historical perspective above makes clear, she was not a typical left-wing figure as understood in the Japanese context. Unfettered by any specific ideology, she pursued the truth as a scholar, and concrete achievements as a practitioner. As a result, she became a leading figure in both human rights and refugee issues, though she had not considered herself as an expert in either field.

Events in the Life of Ogata Sadako

Ogata believed that the nations of the world were irreversibly interdependent. This is particularly the case for countries like Japan, which cannot ensure its peace and prosperity on its own and therefore must pursue global engagement. This constituted the basis for her beliefs and the essence of her internationalism. She held to this idea throughout her life, and it underlaid her work on refugees and development assistance. This was why she particularly deplored the insular tendencies of countries including Japan.

Asked whether it is humanism that underpins her work, Ogata modestly argued that “far from being motivated by lofty ideals, it is just an expression of natural instinct of any human being.” As someone who had observed the horrors of humanitarian crises first hand and witnessed refugees languishing in intolerable conditions, Ogata argued that “once you see something horrible, aren’t you compelled to take action? You want to do something, right? It is not a question of logic.” 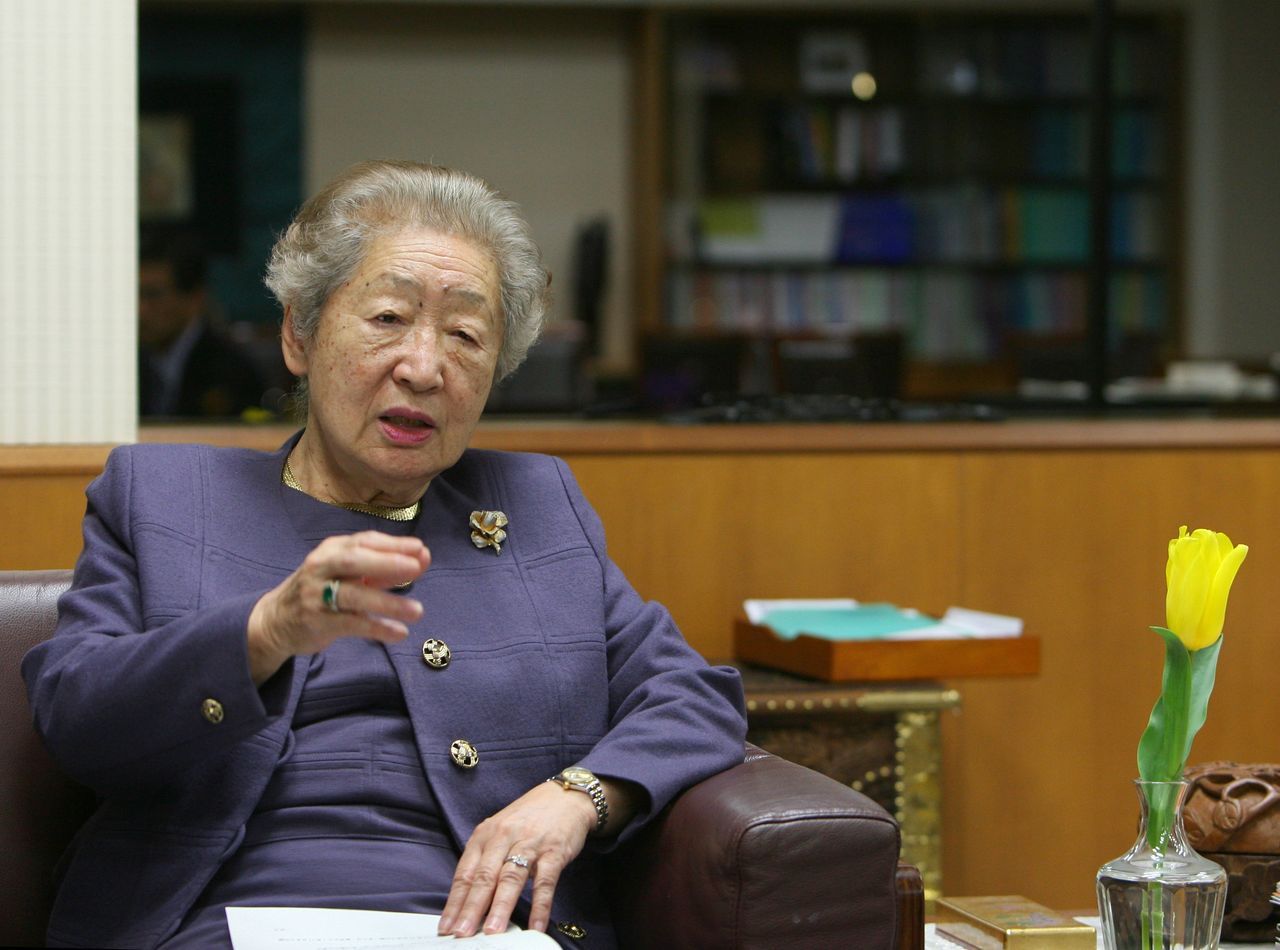 Ogata Sadako sits for an interview in January 2008. (© Jiji)

Ogata’s combination of deep compassion and robust humanism is striking, raising doubt about the extent to which such an attitude is accepted or put into practice in Japanese society.

People talk about the “CNN effect” in the fields of international relations and media studies, referring to the influence on public opinion of CNN and other news outlets reporting from the front lines of conflicts and crises around the world. It is assumed that the images of destruction and suffering broadcast into living rooms lead people to demand their country to take action. This is in line with Ogata’s argument that “once you see something horrible, aren’t you compelled to take action?” However, if people do not care about conflicts or crises, the CNN effect cannot work. It is highly questionable if a similar process, something that could be called an “NHK effect,” has ever worked in Japan.

There are often human rights and liberal activists demonstrating in front of the Chinese embassies in the United States and European countries these days, criticizing the human rights situation in China and the way in which Beijing deals with ethnic minorities. Protests take place in front of the Chinese embassy in Tokyo too, but what is unique is that the scene is more or less dominated by right-wing and nationalist activists.

Nonetheless, it is still undeniable that the alliance with the United States for Japan has long been a window to the world and the successive governments led by the Liberal Democratic Party used it as a way to expand Japan’s role in the world. For those pro-US conservatives, the expansion of Japan’s international engagement was largely seen as a means to manage the alliance with the United States, in light of Washington’s increasing expectations and demands.

In the United States and many countries in Europe, for example, some (if not all) left-wing, center-left, and liberal parties have traditionally pushed for more international engagement and foreign interventions. In Europe, some groups are in favor of humanitarian interventions while keeping the United States at arm’s length. The school of thought of this kind is almost totally absent in Japan, and it may be why domestic support for Japan’s international engagement remains weak. The left-wing and liberal schools of international engagement are not necessarily linked with anti-Americanism. Ogata, likewise, was far from anti-American.

Both isolationism and expanding Japan’s international role as a way of managing the Japan-US alliance went against Ogata’s convictions, but she found the latter closer to her aims, because expanding Japan’s international engagement was something she believed in. Ogata thus worked closely with successive Japanese governments and was often mentioned as a possible candidate for the post of foreign minister.

Nevertheless, Tokyo’s efforts in expanding the country’s international role were far from enough and were not commensurate with the size and potential of Japan in Ogata’s eyes. Ogata in a September 24, 2015, interview with the Asahi Shimbun, expressed disappointment at this situation, saying that she “had great hopes for Japan dispatching SDF on United Nations peacekeeping operations. But the government would not send SDF to dangerous areas.” Asked in the context of the Peace and Security Legislation in 2015, she replied in a Nihon Keizai Shimbun interview published on August 13, 2015, that “as long as there is need on the ground, SDF troops should be sent for a security assistance role” in international operations (beyond SDF’s traditional role for humanitarian and reconstruction assistance), demonstrating Ogata’s realism.

Such words may surprise those who know Ogata only from her role in protecting refugees and as a messenger of peace as well as one who opposed the 2015 Peace and Security Legislation and the idea of sending SDF troops abroad. But Ogata was far from a naïve idealist.

In the same Asahi interview, Ogata also rebuked Prime Minister Abe Shinzō’s “proactive contribution to peace,” noting that few in the government were talking about how much of a sacrifice Japan was willing to bear for international causes. “That was why Abe’s policy was just empty words,” she derided. Ogata believed that Japan needed to do more.

Failure of Internationalism in Japan

In conclusion, it is undeniable that internationalism as defined by Ogata has failed to take root in Japan—both within the government and in the society at large. The Abe government has championed “proactive contribution to peace” as well as “diplomacy through a panoramic perspective of the globe” and it does seem that Japan’s international profile has increased. But does this mean that Japanese are now more outward-looking and the country is more prepared to accept the cost and sacrifice for the cause of international peace? The answer is probably no. Ogata has left us with a daunting, unfinished task.

As Japan’s national security environment becomes more precarious and the population shrinks, many voices advocate allocating Japan’s limited resources for the issues of top priority like territorial defense. Such prioritization seems logical and inevitable, but, over the medium to long term, will that really ensure Japan’s security and prosperity?

As for this question, Ogata believed that “the key is whether people can develop a feeling of solidarity with others in far-off lands,” as she wrote in a book about her work as UNHCR, Watashi no shigoto (My Job). This view, which combines her humanism and her realism, can perhaps serve as a good starting point of reflection for Japan.

(Originally published in Japanese. Banner photo: Ogata Sadako, UNHCR, is welcomed at a Rwandan refugee camp in Bukavu, Zaire (today the Democratic Republic of the Congo) on February 13, 1995. © AFP/Aflo.)