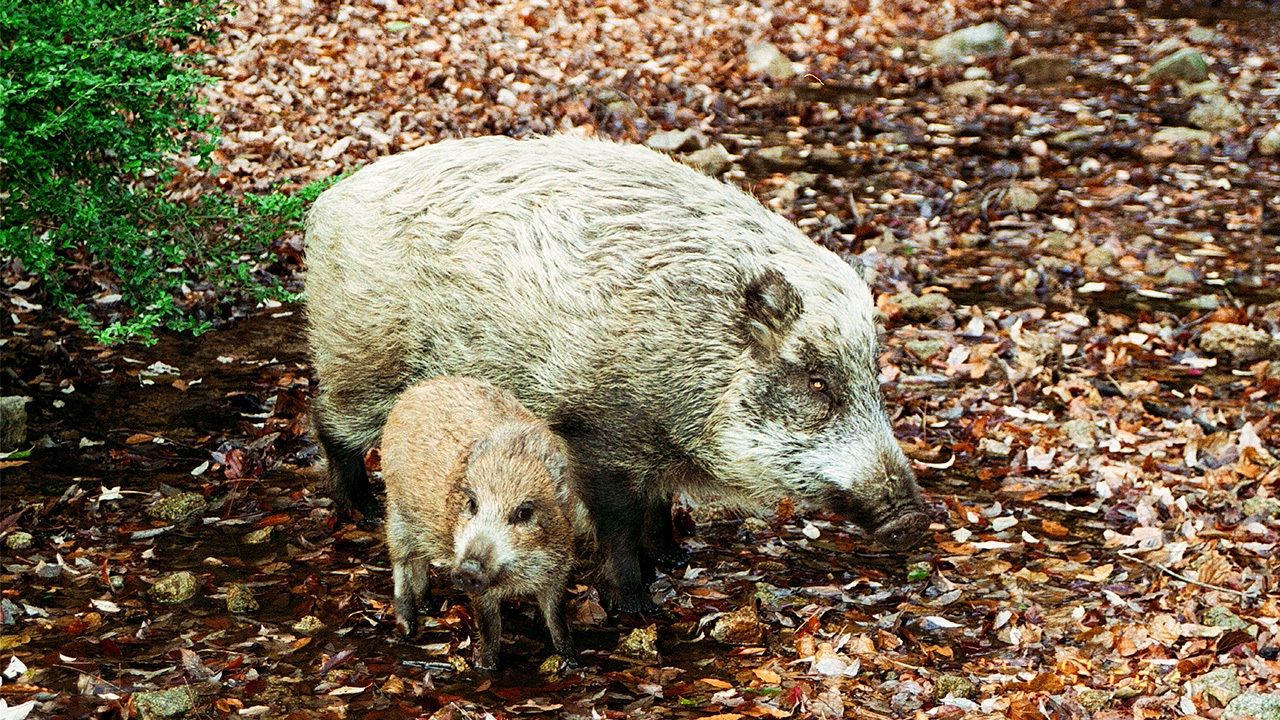 Lifestyle Environment Disaster Health Jun 4, 2020
Crop destruction, infectious disease, and other problems caused by wild boars are on the rise as herds expand their territory and begin encroaching on populated areas. Wildlife expert Kodera Yūji looks at the causes for the rise in incidents and considers ways to deal with the growing risks the animals pose.

Wild pigs are highly adaptive animals that have spread naturally and by human intervention into a wide range of environmental niches. Wild boars (Sus scrofa) roam extensively across Europe and Asia, from Portugal in the west to Japan in the east, and feral descendants of domestic stock now thrive in areas where centuries ago explorers and settlers introduced the animals as livestock or game.

In Japan, wild boars, or inoshishi, were historically found in abundance in the mountains and forests of the main islands of Honshū, Shikoku, and Kyūshū. Colonies also lived in far-flung regions like the island of Tsushima and the remote Gotō and Ryūkyū island chains. During the Meiji period (1868–1912), however, numbers declined dramatically as Japan’s burgeoning appetite for the natural resources it needed to fuel its rapid modernization devastated the animal’s habitat. With their territory reduced to a few scattered pockets, the creatures shrank into the ecological shadows, where they existed as little more than a passing nuisance to farmers.

The population remained low into the postwar period, but economic change starting in the 1960s alleviated environmental pressures and herds began to rebound. One major development in the animal’s comeback was Japan shifting to fossil fuels as its main source of energy. Charcoal had long fueled a range of industrial and domestic activities, but demand plummeted as consumption of coal, oil, and natural gas increased. As a result, expansive stands of deciduous broad-leaved trees were spared the chainsaw. As these woodlands grew and matured over the subsequent decades, they provided boars with an ideal habitat teeming with shelter and food. 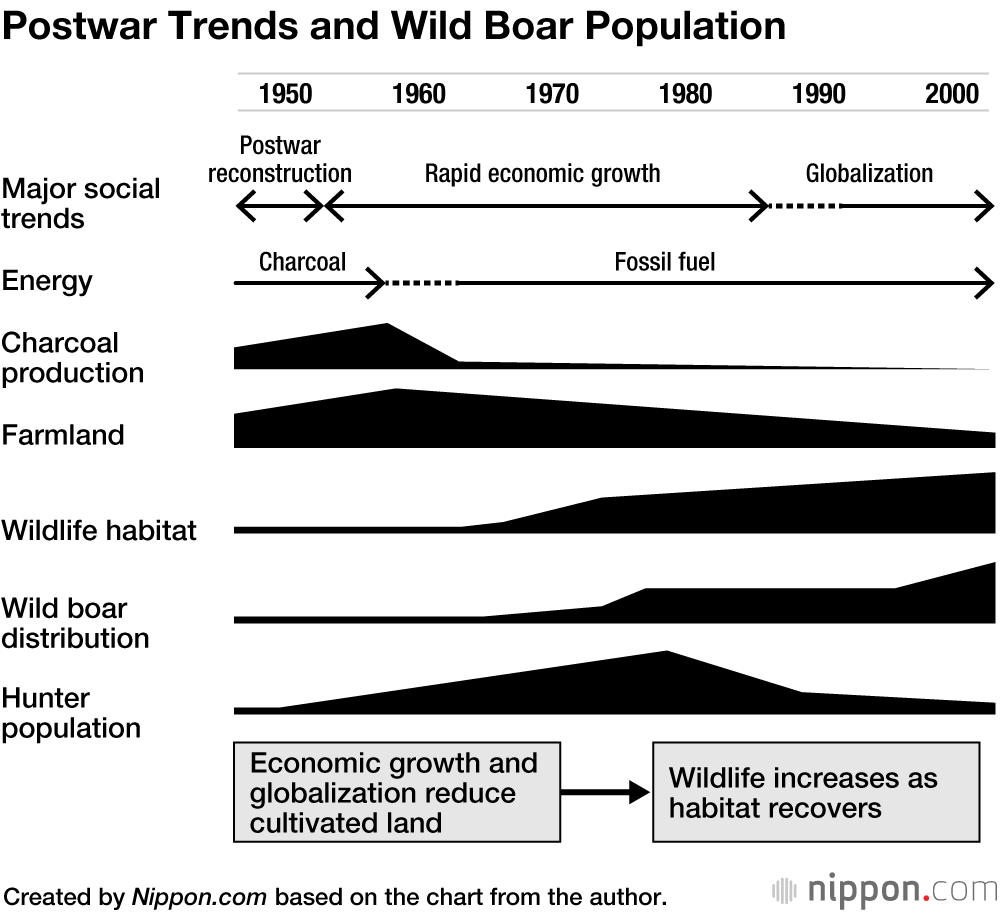 The habitat of the wild boar rapidly recovered as Japan shifted to fossil fuels and the amount of land under tillage decreased after World War II.

Another factor in the recovery of the boar was the change Japan’s rapid economic expansion brought to the agriculture sector. The high-growth years saw the introduction of modern farming techniques and equipment that boosted yields of staple crops, and by 1970 Japanese farmers grew as much rice as the nation consumed. However, domestic demand of rice continued to decline even as production increased, resulting in a surplus of the grain. To keep prices from dropping, the government introduced a paddy acreage reduction program that subsidized growers for leaving fields uncultivated, increasing the amount of fallow land around the country. Wild boars thrived in areas with untended paddies, as the fields provided a wealth of food and water, and starting in the 1970s their population steadily climbed.

As of 2018, wild boars are found in every prefecture except Hokkaidō. The animal’s remarkable recovery has produced new concerns, though, foremost of which is increased incidents of crop destruction as growing herds encroach on farmland. Hunting and capturing animals are still the main methods for keeping the wild boar population in check. In the 1950s and 1960s hunters caught or killed upward of 40,000 animals annually. While the growing boar population has pushed this number up—in 2016, some 610,000 were culled—the approach has ceased being effective in preventing damage to rice and other crops, which remains at a steady level even as more animals are trapped or killed. 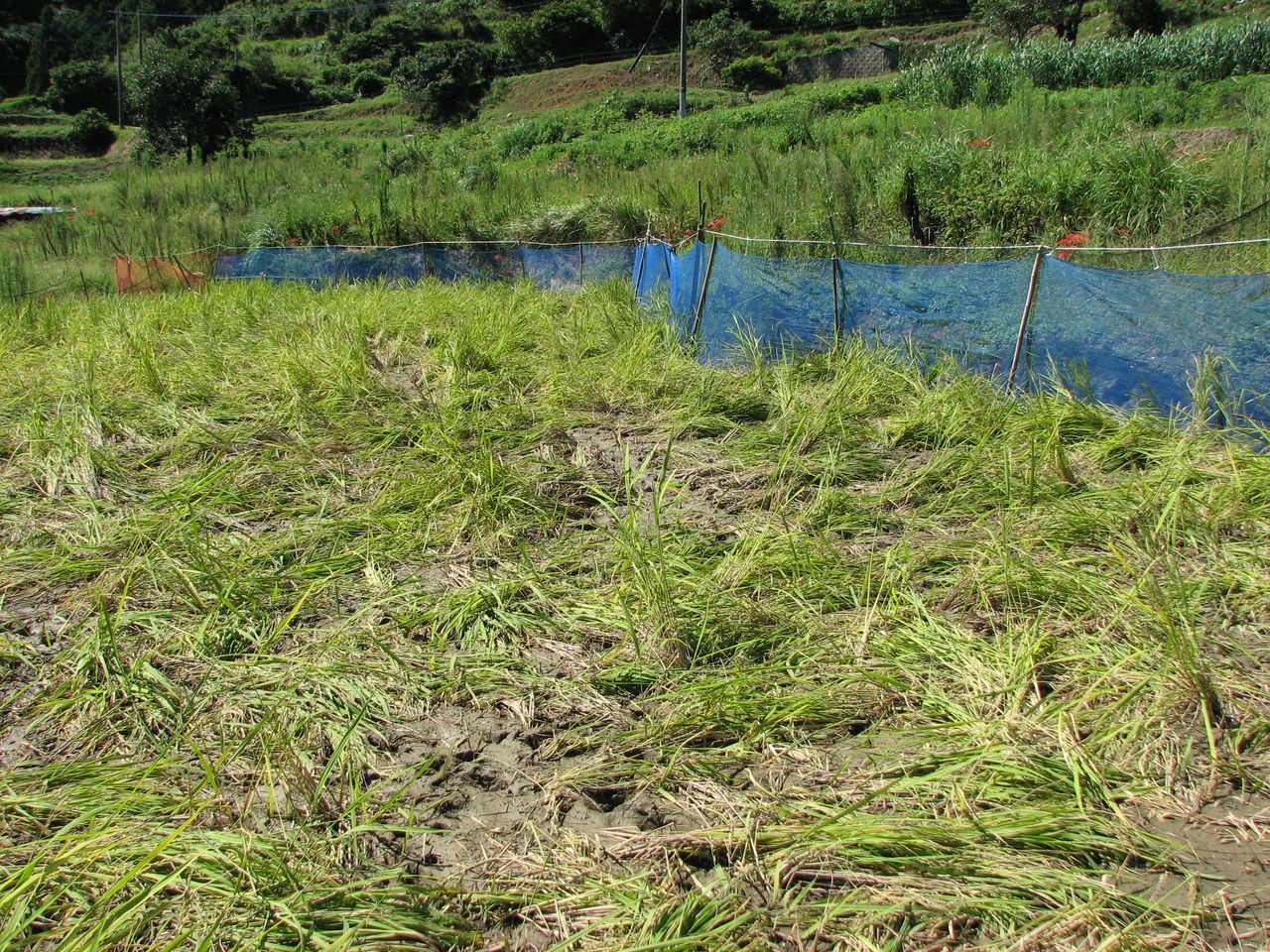 Currently, 44 prefectures have enacted conservation and management plans for a group of animals including wild boars that have hunting and capturing as central control measures. At the rate the animal population is now growing, though, the policy can only realistically reduce damage in areas that traditionally have low numbers of animals, such as large tree farms and regions that receive heavy winter snowfall. Authorities need to consider a mixed approach that includes installing fencing around fields and woods for application in areas with large herds. 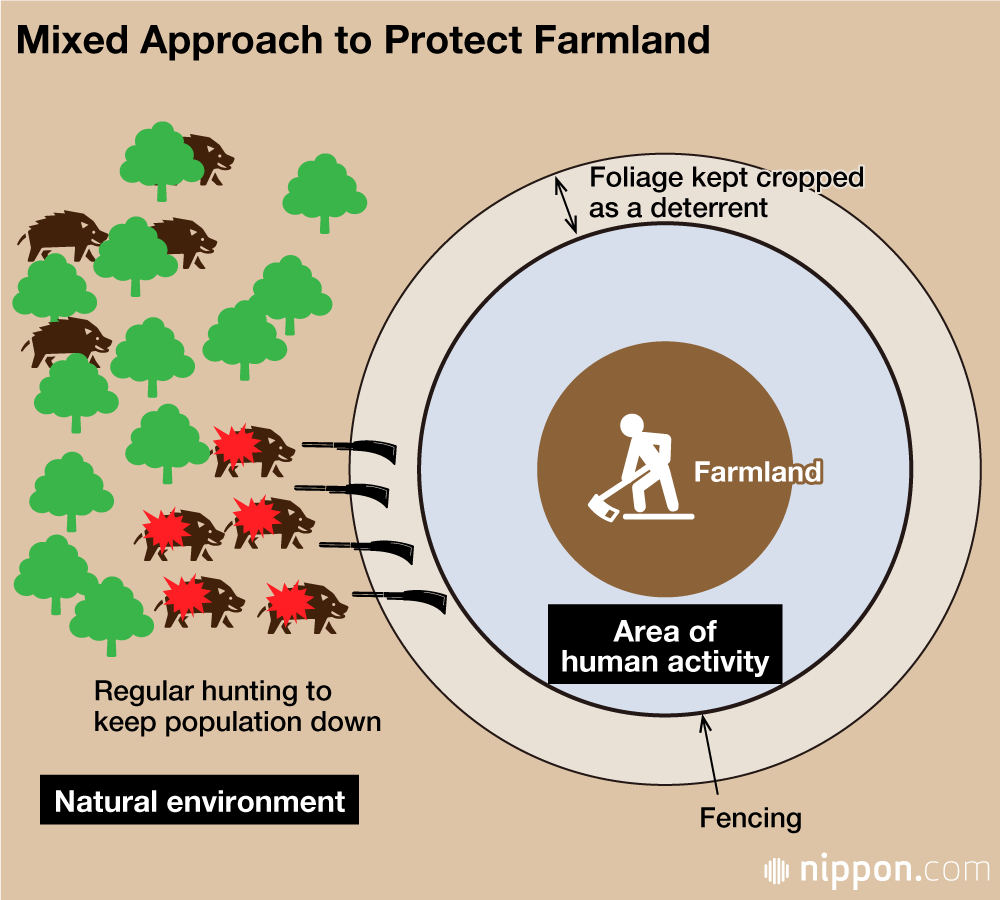 Boars have also become a concern in populated areas. For instance, residents along the Watarase River, a major tributary of the Tone River flowing through Gunma and Tochigi Prefectures, have reported damage to levees by foraging herds. Left unattended, upturned soil washes away, weakening the embankment and increasing the risk of a collapse when waters rise during a storm. Damage first appeared in 2010 and has been occurring with greater frequency, presenting authorities with the mounting costs of repairing scarred patches and preventing further destruction. The issue is still limited to a few areas, but it is only a matter of time before other waterways around the country face a similar threat. 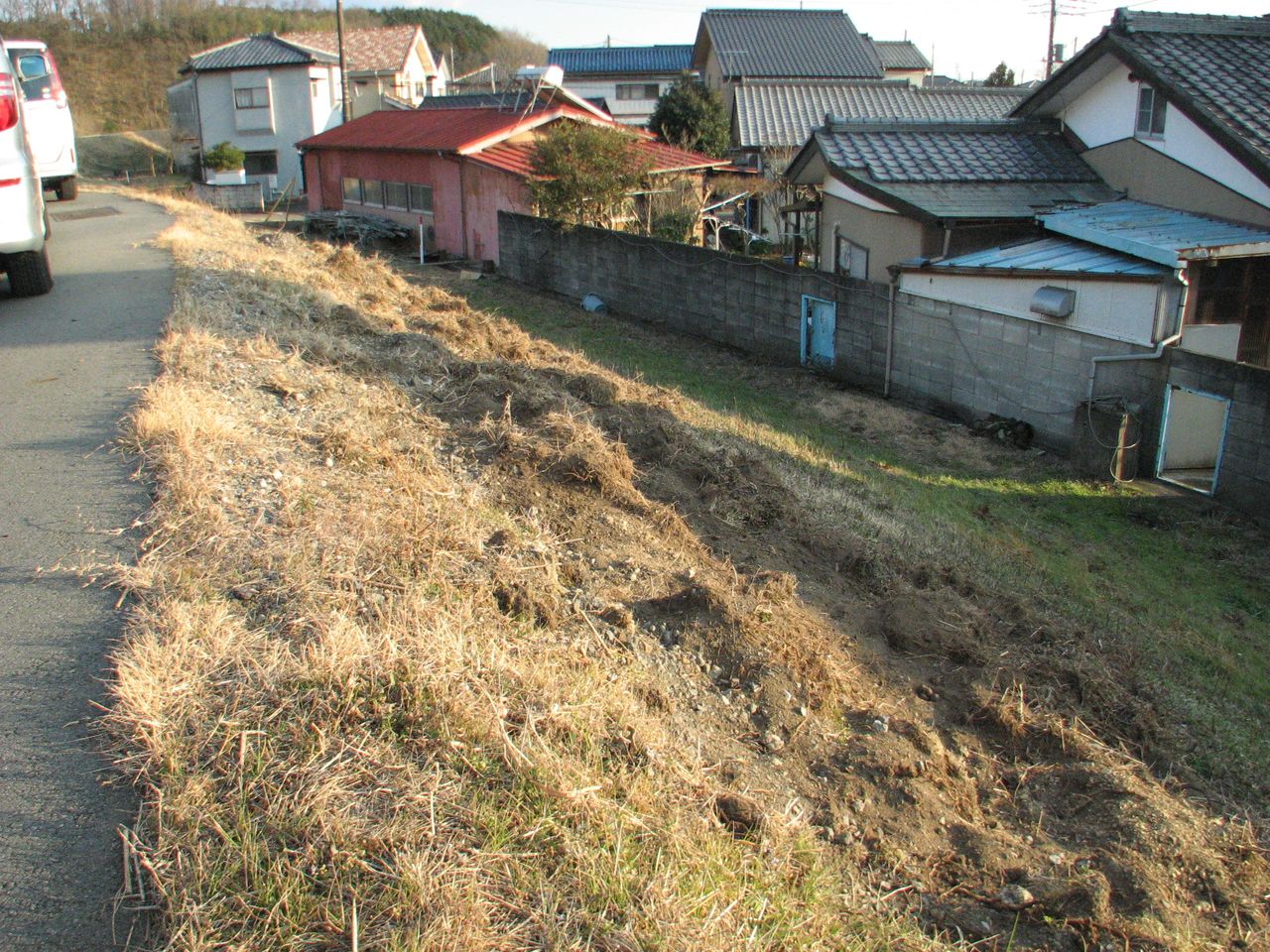 Damage from wild boars on an embankment of the Watarase River.

Along with damage to infrastructure, there are growing incidents of vehicles colliding with marauding boars. Boar attacks on human beings are also on the rise. According to the Ministry of the Environment, there were 141 injuries and one fatality over the three-year period from 2016 to 2018. The escalating trouble is surprising to many, as wild animals are typically thought to shy away from humans. However, wild boars have several characteristics—the same that enabled people in ancient times to domesticate the animals—that make the species tolerant of human-dominated environments. These include high adaptability, an omnivorous diet, a mild disposition, and a tolerance of overlapping.

These traits, combined with the prospect of easy meals from sources like crops and discarded food waste, lower boars’ wariness and draw individuals to inhabited areas. Humans have exacerbated the problem by feeding the animals, as was the case at Mount Rokkō in Hyōgo Prefecture. In 1965, visitors to the area started leaving food out in the hope of catching a glimpse of a boar. Emboldened by the free meals, animals began foraging for food in neighborhoods of Kobe farther down the slopes. The practice of feeding boars increased in the 1980s and 1990s, leading to more frequent and widely dispersed reports of damage as individuals made forays deeper into the city. The problem finally became too big to ignore, and in 2002 the city passed the nation’s first ordinance banning feeding. 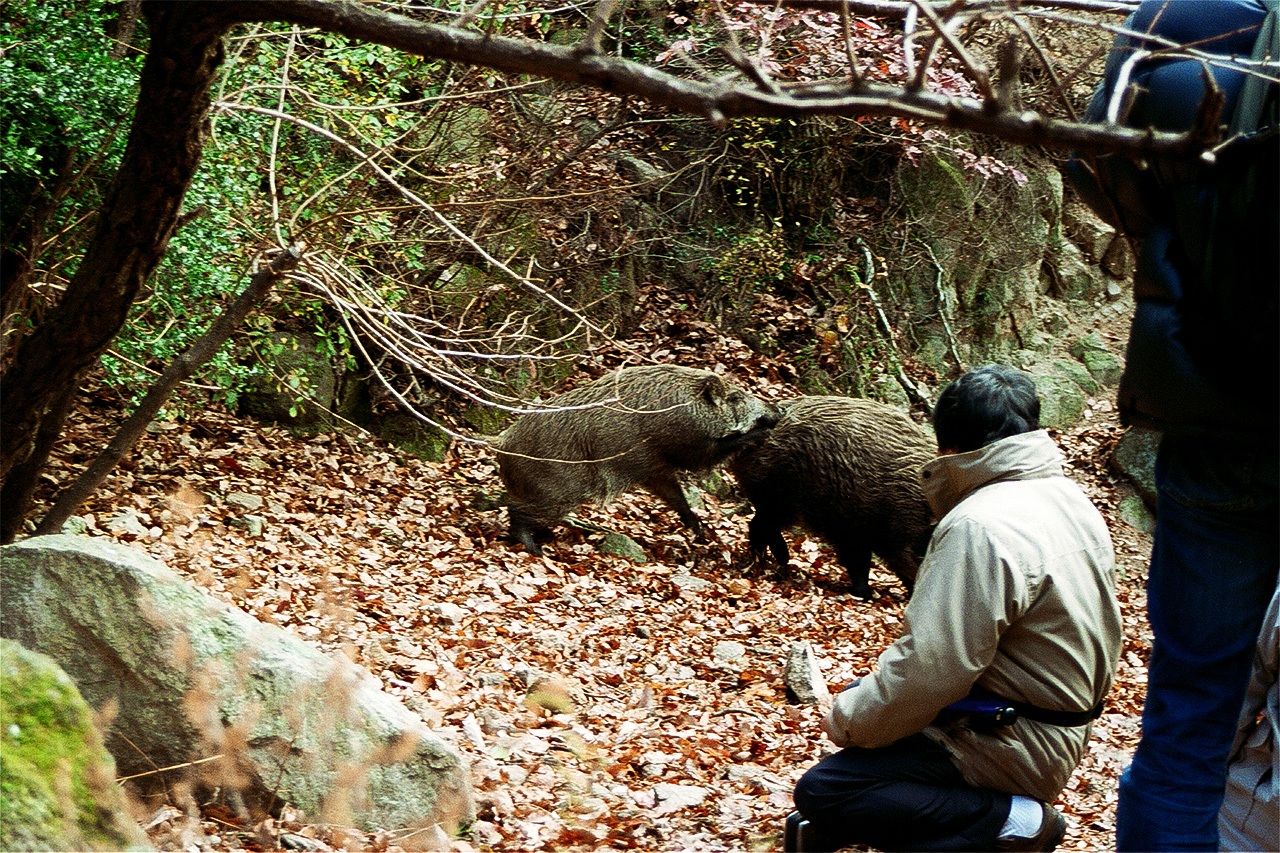 Boars show no fear of humans as they pass through the forest on Mount Rokkō.

The Risk of Disease

In addition to property damage and physical harm, wild boars extending their territory closer to farms and populated areas pose a serious risk to humans through the vector of infectious disease. A study of urban wild boars in Berlin, for instance, found 18% of individuals carrying antibodies for leptospirosis, a bacterial disease that affects humans and wild animals alike. Leptospirosis is spread through contact with infected urine, either directly or indirectly from contaminated water and soil. Such a high prevalence of the illness in the 5,000 or so boars dwelling in the city is a concern for local pig farmers, as an outbreak among livestock would spell economic disaster. The situation also puts local residents at greater risk, as illustrated by several cases reported in Berlin of people falling ill with the disease. 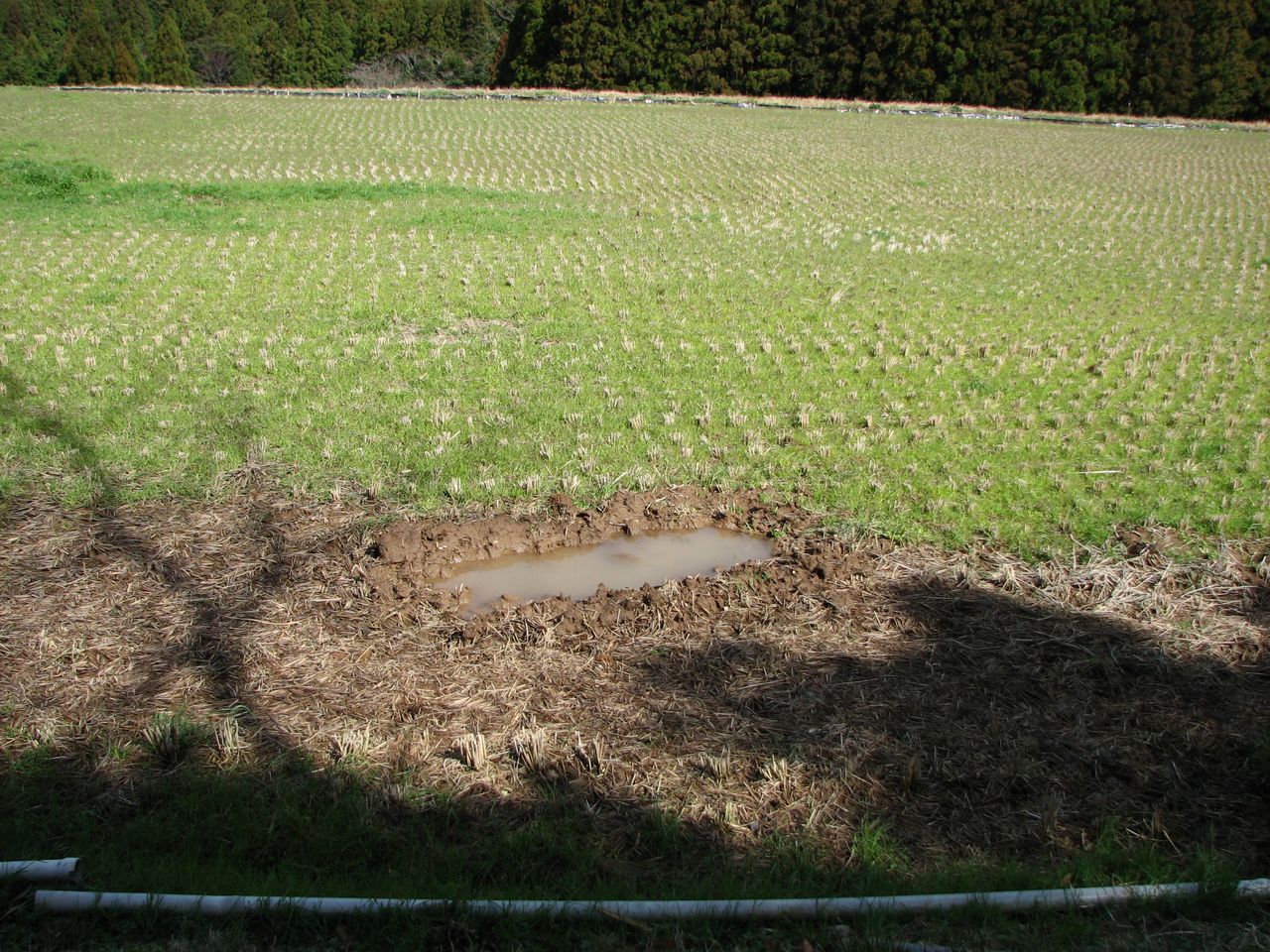 A puddle created in a fallow rice paddy by a mud-bathing wild boar. There is increased risk of attack and disease as animals move closer to populated areas.

In Japan, wild boars are known to carry the virus that causes Japanese encephalitis, a potentially deadly brain infection, and can pass it on to livestock and people. As with leptospirosis, communities can expect to see an uptick in cases of the malady the closer humans and boars live in proximity to one another. However, experts warn that the risk of disease also works in the opposite direction. In 2018, there was an outbreak of classic swine fever among wild boars, the first in 26 years, linked to the improper disposal of imported food products and other goods contaminated with the virus.

One area suffering heavily from invasive boars is Fukushima Prefecture near the Fukushima Daiichi Nuclear Power Station. Multiple meltdowns at the plant following the March 2011 Great East Japan Earthquake forced nearby residents from their homes, leaving behind empty towns and fields that were well-suited to supporting colonies of wild boars. Since the disaster, the boar population has steadily grown, and herds now inhabit land between the mountains and coastline. Individuals can be found roaming freely through quiet streets and have even been known to break into abandoned homes and other buildings. This has proved to be a problem for returning residents. Authorities lifted evacuations orders for all but the most heavily affected areas in March 2018, and there has been a subsequent decline in boar sightings in communities where greater numbers of inhabitants have returned. However, there is still a need for measures to protect people and property from boars in more sparsely populated communities. 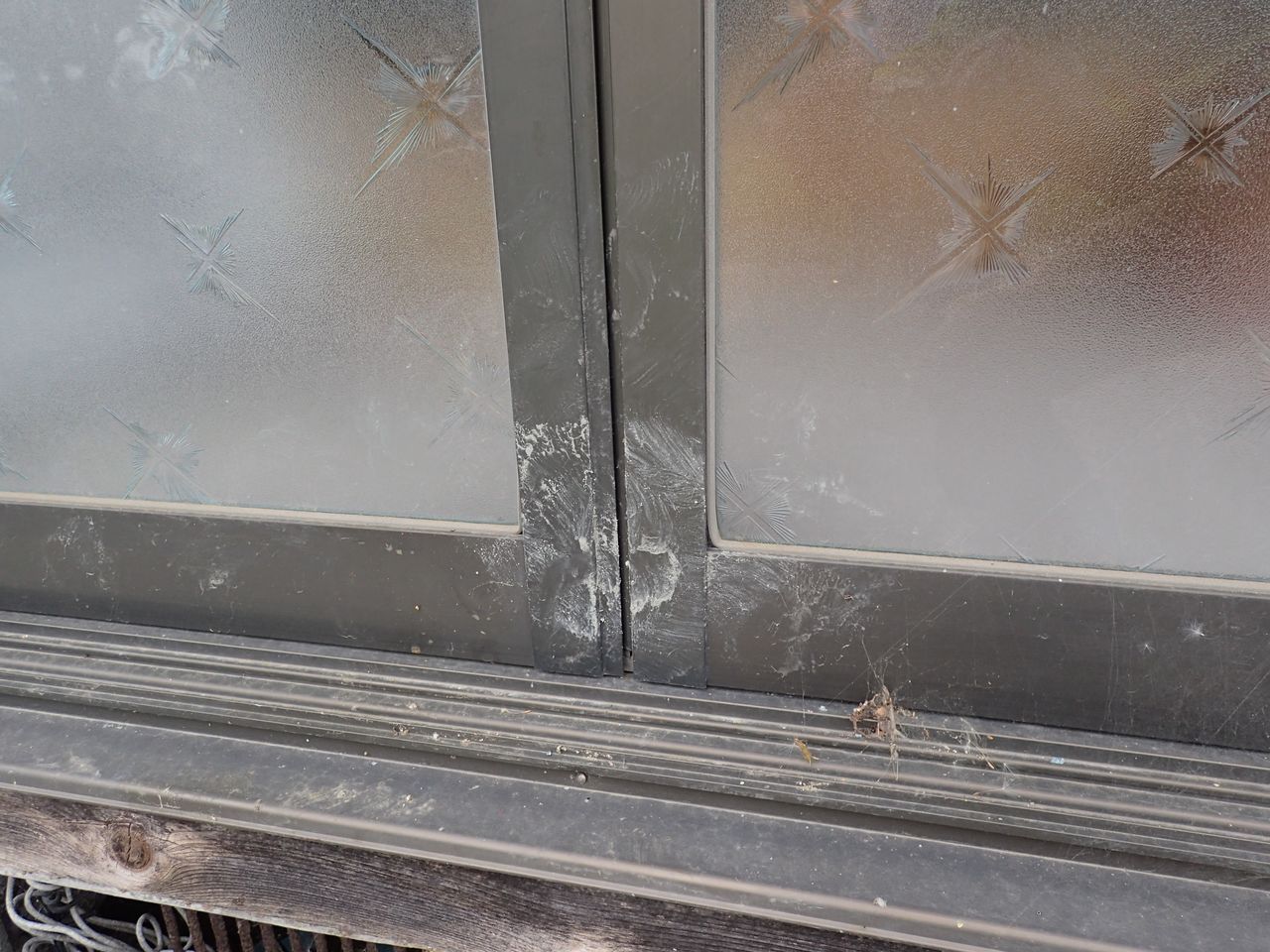 Smudges show where a wild boar tried to force open a sliding door of an abandoned Fukushima Prefecture home. Photo taken in May 2017. 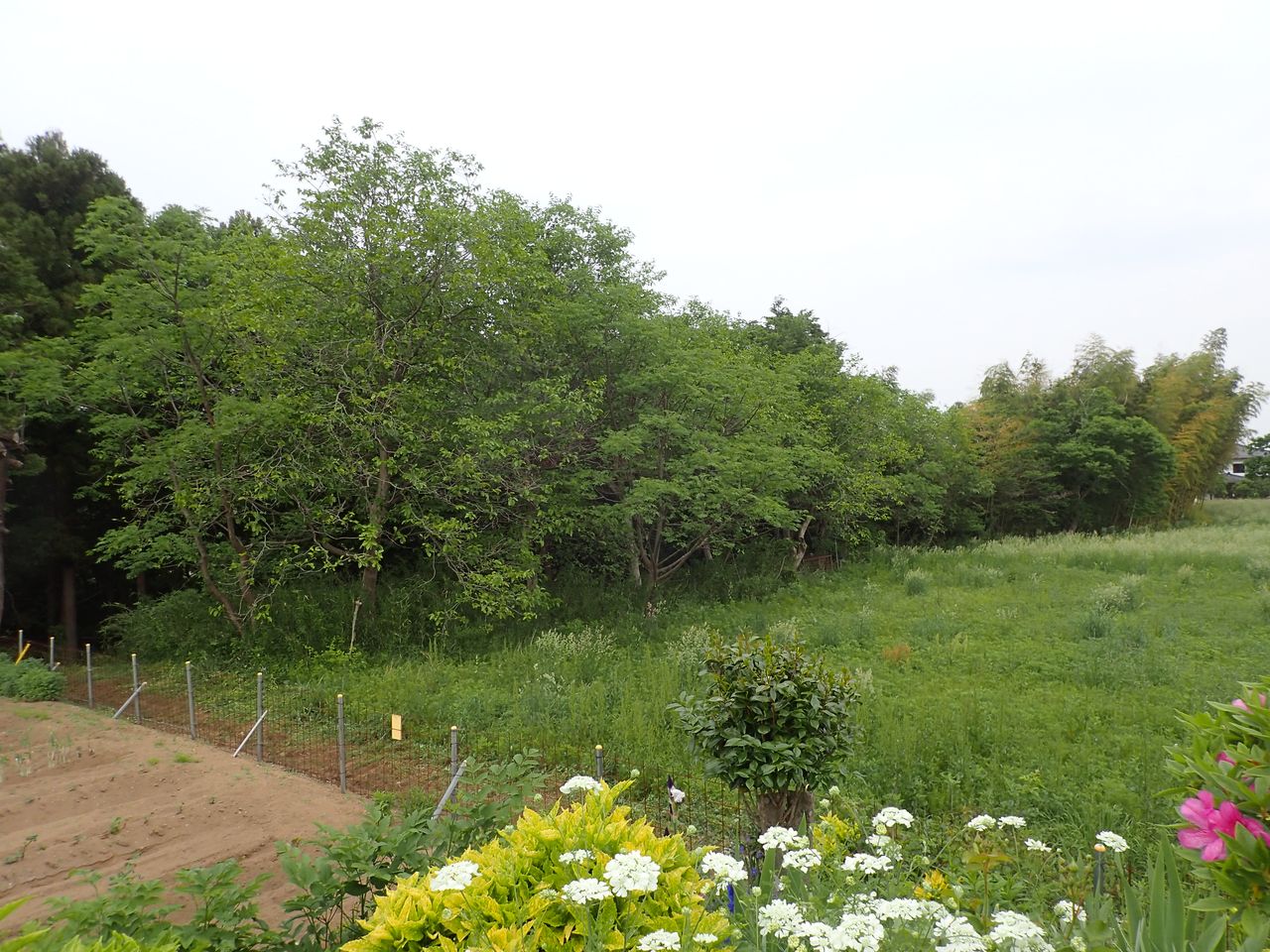 A field with a protective fence in a Fukushima area where evacuation orders have been lifted. Residents have been slow to return, as can be seen by the neighboring abandoned plot, and measures must be made to keep boars from damaging crops and property.

Striking a Balance Between Human and Nature

Japan faces demographic pressures in the form of population decline and rural depopulation that make it unlikely to get ahead of the wild boar problem. There are fewer and fewer barriers keeping animals from encroaching on regional communities, and over the last several years there have even been sighting of wild boars in communities in and around Tokyo. It is obvious that old tactics are no longer effective in keeping the boar population in check and that what is now need are new, practical approaches to keep the problem from getting further out of hand.

One tactic would be to let some previously inhabited areas return to nature. Pockets of agriculture can remain, with farmers using measures like fencing to protect crops from wild boars, but otherwise nature should be left to its own devices. Creating a clear divide between areas of human activity and the wild would allow the surrounding ecosystem to return to a natural balance, increasing animal diversity without impacting the livelihood of local residents. Such an approach would be an important step toward Japan’s formation of sustainable conservation policies for boars and other wild animals as it adjusts to the new reality of its dramatic human population decline.

(Originally published in Japanese. Banner photo: A sow and boarlet stand in a clearing on Mount Rokkō. All photos by the author.)