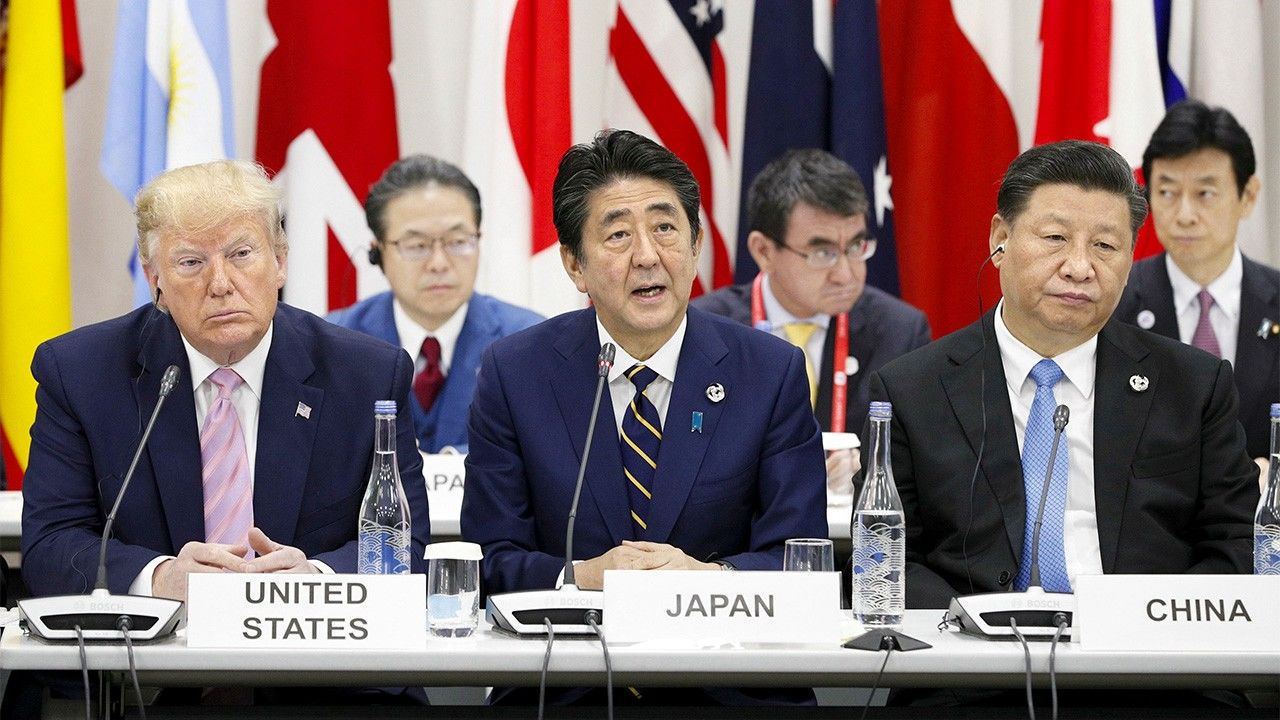 America’s Mistaken China Policy: A Need for New Trade and IT Strategies

Economy Politics Apr 8, 2020
The COVID-19 pandemic is now the world’s top economic, as well as public health, story. But the Sino-American economic relationship remains a vital factor influencing the global economy’s wellbeing. The trade war appears calm for now, but the author warns that the high-tech cold war continues, and China could well come out on top.

Trade Warriors Lay Down Their Arms

US President Donald Trump is known for his sheer unpredictability, but when it comes to the recent trade frictions between the United States and China, he has been remarkably easy to read. He has made a series of flamboyant bluffs in his dealings with Beijing, but in the end, he has pursued a limited set of priority areas where results can be expected relatively quickly—such as getting China to increase its US imports and provide better market access, or to improve its protection of intellectual property rights—and has put off for later thornier areas like China’s industrial policy and subsidies for domestic enterprises. President Trump’s desire to avoid a full-blown trade war, with maximum punitive tariffs deployed by both sides, has been evident. He likely sought to avoid any severe blows to the US economy, and in particular to its stock market, that could threaten his reelection chances.

The Chinese side, meanwhile, has also displayed a clear willingness to seek the second-best option. Beijing cannot have been happy that a majority of the new American tariffs remained in place despite its considerable concessions on import levels and market access, but it, too, lacked both the will and the economic capacity to opt for an all-out trade war instead.

Based on the above, we might say that both China and the United States viewed the “phase one” trade deal announced in January 2020 as little more than a clumsy charade with predetermined outcomes. Today, though, as the dramatic slowing of China’s economy puts the agreement’s import targets out of reach and the approaching US presidential election this autumn threatens to trigger the trade conflict once more, caution is called for.

Despite the seeming thaw in trade relations described above, Washington has maintained a hard line for more than a year now on the high-technology front. US measures have included more stringent restrictions on Chinese inbound investment, implemented in part through stronger oversight by the Committee on Foreign Investment in the United States. This escalation has also included bans on the use of certain devices manufactured in China by American governmental agencies or corporations, as well as bans on the export of IT devices to Chinese companies and other organizations appearing on the so-called Entity List, including re-exports of US technologies via third countries. Washington has also been pressuring its allies to avoid the use of communications technology produced by the Chinese manufacturer Huawei as they roll out their 5G wireless networks. There has been a steady stream of tough measures aimed at reducing China’s role in the high-tech sector.

On the security front, meanwhile, there is no shortage of China-related concerns for the United States, and many believe that the Americans are likely to continue bolstering their controls aimed at addressing these concerns.

How should Japan respond to the security risks that Washington believes are posed by China, and the US measures taken to address them?

I believe, first, that Japan needs to face squarely the risk China poses on the security front. This is more than evident in the way that China has attempted to chip away at Japan’s effective control over the Senkaku Islands, as well as the highly organized Chinese cyberattacks mounted against Japanese defense-related corporations.

Secondly, for better or for worse, Japan will find it extraordinarily difficult to completely turn its back on requests in the name of security that come from the United States—the ally that provides that security for Japan. As I will explain below, going along with the United States does threaten to deal considerable damage to Japan’s industry and economy, but this will likely be swallowed as part of the cost of maintaining the alliance.

Be this as it may, though, the American high-tech cold war against China remains an extreme policy, and one that could bring about the isolation of the United States and its backers on the global stage, as I describe next.

Ever since 1996, when the World Trade Organization concluded the Information Technology Agreement aiming to completely eliminate tariffs on IT products, the industry has advanced rapidly along on waves of trade liberalization and globalization. The hardline stance taken by the United States recently flew in the face of these trends, amounting to a sudden declaration that IT would be treated as an industry excluded from free-trade principles.

The US measures like bans and boycott-style restrictions on trade with specified counterparts, backed by the threat of severe punishment for those circumventing them, can have a major impact in terms of the contraction they bring about in business activities. They also threaten to sever links in the IT supply chain, which has grown into a truly global web over the years.

If Western IT firms are forced to halt their dealings with China, the blow to them will be immense. In Japan, where the electronics sector has withered as a whole, the high-end electronics parts supply industry has remained one bright spot. But if Washington continues to beef up its tough trade policy, this industry, too, will inevitably decline. And a similar fate awaits IT industries in South Korea, Taiwan, and even the United States itself.

The Chinese side, meanwhile, which has found itself facing the risk that its supply of semiconductors could be cut off by the American trade-ban measures, has redoubled its efforts to get its own domestic semiconductor industry off the ground. The US-made chips that once powered Huawei’s devices are apparently being replaced one after another with China-produced alternatives. In this case, the US hard line may have had precisely the opposite effect from what was intended.

The United States has also sought to freeze products from Huawei and other Chinese firms out of the 5G networks that are now being rolled out around the world. As of today, though, only three nations have agreed to go along with American wishes—Japan, Australia, and Vietnam. Even among G7 nations, members like Britain and Germany are planning to implement Huawei equipment with some conditions; furthermore, most G20 members other than the G7 are openly expressing their welcome to Huawei. The excessively aggressive US efforts to boycott Chinese products bring about too many demerits in purchasing countries—higher costs, delayed network rollouts, and lower telecommunication quality.

The twenty-first century is expected to be one when competitiveness in the “data economy”—the ability to amass more data than other players—will determine the outcome of economic competition as a whole. The United States and China are also clashing in the struggle to decide what the rules and frameworks governing the data economy will be. As a result, some predict, the global economy will see itself split into blocs as decoupling proceeds between the portions of the data and digital economies split between the Beijing- and Washington-led camps.

The United States argues that China has steadily erected barriers around its own data, protecting it from the rest of the world; Other nations, meanwhile, have given all comers free access to much of their data. It further argues that this has brought about an unequal, unfair competition between China and these freer societies, posing threats to data privacy and security as a result.

There are certainly reasons to agree with this criticism, but there is also cause to worry about the possible US intention to craft a bloc that can stand up against this Chinese menace.

A look at another set of countries—in Southeast Asia, the Middle East, the Indian subcontinent, and Africa, for example—shows them to be moving their economies onto a smartphone-driven digital footing at a far faster pace than the developed world has done. In these regions, Chinese telecoms giants like Huawei and ZTE enjoy massive hardware market share; in software and apps, meanwhile, China’s Alibaba and Tencent have engaged in robust M&A activities, building up formidable private-sector alliances with local players. When it comes to the formation of new blocs for the data economy era, in other words, China is in the lead.

One reason China has stolen a march here is that its efforts have been led by business. The US strategy, on the other hand, has been guided by the government and has consisted mainly of browbeating allies to take part in systems with exclusionary measures and other downsides. The market share competition between the two blocs will be won by offering merits and benefits and attractive alternatives; America cannot hope to beat China with its current approach.

If Washington adheres to this course, the United States and the nations going along with it will find themselves isolated from the rest of the globe, eventually falling behind in the technological competition of the twenty-first century.

Hoping for an American Course Correction

There are two reasons to remain hopeful, though. The first is the potential of technological innovation. Today, new technologies appear to be strengthening the domineering single-party rule seen in China, but the tide could turn one day, and technological advances could instead mark an end to the Communist Party’s control.

The second reason to hope is the possibility of change in the United States. American history is filled with mistakes made by the country, but it is also one with a powerful corrective capacity. Its struggle with China for supremacy is likely to continue for some time to come, but the extreme policies it is now implementing could well be improved.

Japan, for its part, remains reliant on the United States for its security needs and must toe the line to an extent. But we must be willing to warn our ally about the negative impact of its more extreme choices, and to follow along with this ally with sufficient expectations and readiness for future change.