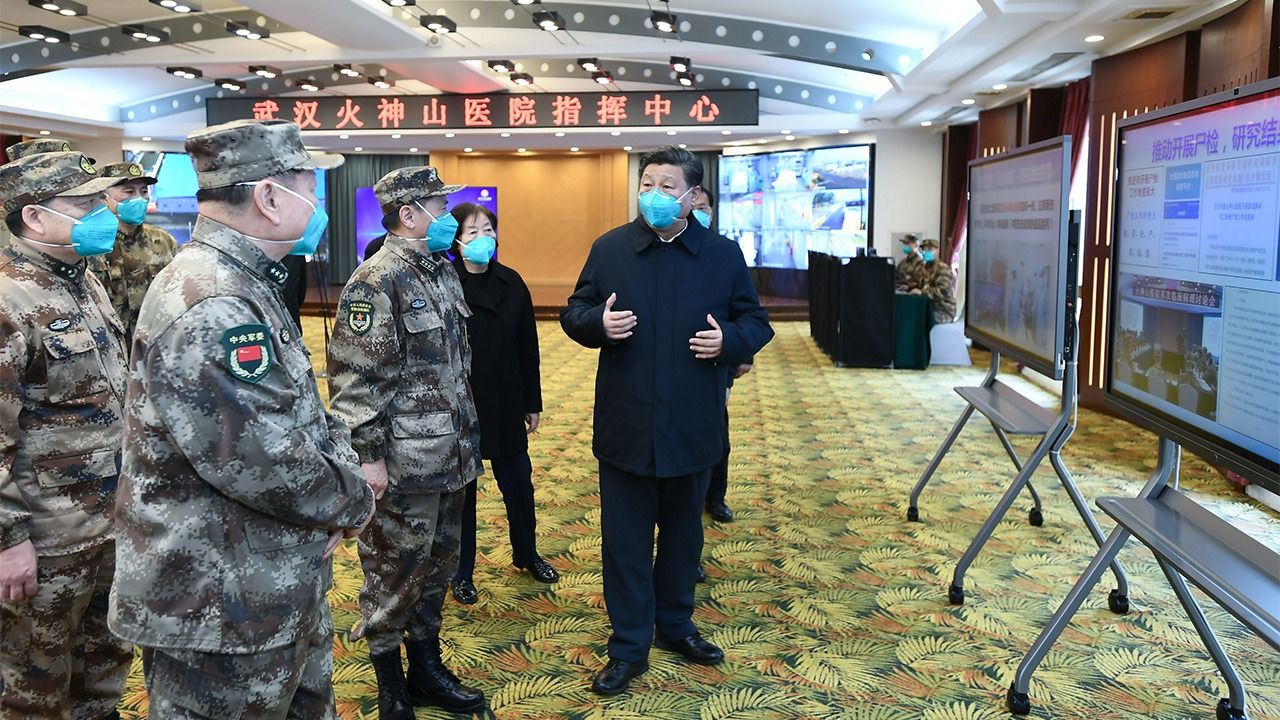 COVID-19, China, and the World Order

Politics Apr 7, 2020
The world will be reeling from the impact of COVID-19 long after the pandemic subsides. Kawashima Shin explores some of the implications for the Xi Jinping regime, international relations, and the world order.

The COVID-19 pandemic is a public health crisis first and foremost, but the response to that crisis in China and the rest of the world is raising questions with profound implications for the world order.

The first of these issues stems from the weakness of the global response, despite the high priority that global governance has placed on collaboration in the control of infectious disease. With the World Health Organization under scrutiny for its leadership, international cooperation has retreated instead of advancing, as national governments tackle the crisis individually. Even in the visa-free Schengen Area of Europe, where regional unification has made such progress over the past few decades, countries are closing their borders. After a period of general progress toward regional integration and global governance in the late twentieth and early twenty-first centuries, we seem to be returning to a world in which states are the dominant players.

The second issue is the impact on liberal democracy. Effective measures to contain dangerous pandemics like this one involve the curtailment of people's fundamental constitutional rights; considerations of due process are an impediment to timely action. Democratic governments are obliged to act within the confines of the law, as by formally declaring a state of emergency, and to seek the public's understanding for their actions. And since the measures adopted will affect election outcomes, they are bound to be driven at least in part by political as well as medical considerations. Meanwhile, lockdowns and social distancing have made divisions of race and class clearly visible. In places like New York, the streets have become the domain of people of color, as low-income workers who cannot afford to stay at home deliver groceries to well-heeled citizens who can.

A third issue is the pandemic's implications for the world economy. Over the past few decades, national economies have been largely subsumed within a network of global supply chains based on an international division of labor. To be sure, the crisis has affected the movement of people more than the flow of goods. But restrictions on human movement and cutbacks in air transportation have inevitably curtailed the movement of goods as well. Will the global economy stage a comeback? Or will the COVID-19 pandemic mark a historical turning point, as countries back away from globalization and embrace economic nationalism and protectionism?

China's prominent role in the crisis has brought these issues into especially sharp focus.

Beijing's engagement with the global community—whether through international agencies or through its own programs, such as the Belt and Road Initiative—has always been focused on advancing China's national power and prestige. In recent years, China has pursued this self-aggrandizing global agenda ever more energetically, even while Washington, under President Donald Trump's America-first policies, has distanced itself from the kind of global collaboration that President Barack Obama led in response to the 2009 Ebola virus outbreak.

The COVID-19 pandemic has become part and parcel of Beijing's tireless campaign to boost its international prestige and influence. In the early stages, when the virus was spreading out from Wuhan in Hubei province, the official narrative centered on the international community's support for China and Beijing's countermeasures. Now that the domestic crisis appears to be subsiding, the focus has shifted to China's assistance to the rest of the world. Integral to this campaign to control the narrative is Chinese government's all-out support for the WHO's geographically neutral designation COVID-19 and its strident opposition to any name referencing China or Wuhan.

At the heart of the narrative is the efficacy of China's tough domestic measures to contain the virus. After the initial coverup in Wuhan and the early administrative missteps that allowed the outbreak to spread, the central government launched a wide-ranging coordinated response on January 20. It put Wuhan and other cities in Hubei under effective quarantine and imposed restrictions on travel and movement elsewhere. Army units and the militia were used to seal off cities. Digital devices, neighborhood committees, and state-owned enterprises were mobilized to control the movement of individuals. Even Chinese scholars doing research overseas were required to stay at home, report their daily activities to their home institutions in China, and avoid contact with other people. The government also worked at a furious pace to build new hospital facilities, where large numbers of patients were tested and those infected by the virus were isolated.

Although Beijing rehabilitated the reputations of doctors who had been punished by local authorities for telling the truth, it exercised tight centralized control over the flow of information concerning the epidemic, silencing or detaining intellectuals who publicly challenged the government's handling of the outbreak while gearing up its propaganda machinery.

Taken together, these tough, uncompromising measures had their effect. Indeed, a number of experts outside the country have praised them as a rational response to a virulent epidemic. Viewed purely from the standpoint of efficacy, it is possible to view the "Chinese way" as the appropriate approach to containing COVID-19.

China can also boast that, despite bottlenecks in the domestic distribution of certain goods, the epidemic has had substantially less impact on China's international trade and the global supply chain than initially feared.

The "Chinese Way" and the Recovery Phase

The COVID-19 pandemic originated in China, but the number of new cases in that country began to fall off in mid-February. By the beginning of March, the Chinese government was preparing to return the nation to a normal footing, albeit gradually. On March 10, President Xi Jinping traveled to Wuhan for the first time since the outbreak (although Premier Li Keqiang had visited at the end of January) to show China and the world how well recovery was proceeding. From March 18 to 22, Wuhan reported no new cases of the virus through domestic transmission. Having been hit first, China was bound to recover first, and it is eager to use that time differential to impress on the nation and the world the wisdom of the "Chinese way," while offering the kind of aid appropriate to a great power. In this way it hopes not merely to salvage its reputation (damaged by early mishandling) but actually to enhance its international prestige.

Beijing is also using the recovery phase to rewrite the early history of the epidemic. The initial failure of local and central authorities to respond appropriately to the outbreak exposed the government of Xi Jinping and the Communist Party to a wave of domestic criticism. Now, in the recovery phase, the government is denouncing and detaining critics of its handling and retroactively justifying the government's and party's actions. Some officials have even gone so far as to suggest that a foreign power brought the disease to Wuhan.

Notwithstanding its early missteps, the Xi Jinping regime has doubtless benefited politically from the recent exhibition of its ability to mobilize vast human and organizational resources and control behavior at the group and individual level. Of course, given the government's early failure to stem the outbreak and the fact that the economic slowdown could put the national targets for 2021 (the centennial of the Communist Party of China) out of reach, one could easily see the epidemic as a setback for Xi Jinping and a threat to the long-term continuity of the regime. But for now, it would appear that the government has emerged from the crisis more convinced than ever of the "correctness" of its own approach to governance and will only tighten its hold over Chinese society going forward.

There is a danger that Beijing's propaganda regarding the success of its response to the COVID-19 epidemic could backfire. Many Chinese citizens took refuge overseas during the height of the domestic crisis, believing other countries to be safer. Now that Xi Jinping has declared China safe, they are returning from overseas in considerable numbers. There are serious concerns that these returnees, some of whom were doubtless infected abroad, could cause a second wave of COVID-19 within China. There are also lingering doubts as to the reliability of Chinese statistics regarding new cases. If the numbers have been doctored, and the Chinese government lifts restrictions on travel on the basis of incorrect information, Xi's declaration of victory could ring hollow.

Even if that happens, Beijing is unlikely to back down from its stance of self-justification. The question for the Xi Jinping regime is whether the strength of its assertion of correctness can stand up to the weight of harsh reality. Once the balance tips, the government will have no choice but to take action, just as it did in late January, when the harsh reality that doctors were reporting could no longer be ignored.

Chinese Diplomacy in the Time of COVID

How will the pandemic affect China's relations with other countries, including Japan?

As of this writing, COVID-19 is still in the process of spreading across the globe, but in the weeks or months ahead, the rate of infection will subside, and the pandemic will come under control. Barring a second wave, China will be positioned at the forefront of the recovery phase. From this position, it will be able to provide certain forms of assistance to other countries, whose "gratitude" will provide much fodder for domestic and external propaganda, as we have already seen in respect to Italy.

What happens next is key. Beijing will be eager to lift all remaining emergency measures domestically and resume normal interactions with countries where the epidemic has subsided. Because the pandemic started in China, the countries closest to China appear to be reaching the post-peak period, although a new wave of infections cannot be ruled out. Barring another outbreak, China will in all probability move first to normalize economic ties with those countries, along with certain participants in the Belt and Road initiative, before it does so with the West, establishing a kind of quasi-bloc for the normal movement of people and goods. This bloc could well become a mechanism for decoupling from Western economies.

Japan and Singapore, which have been relatively successful in controlling the epidemic, may be two top candidates for early normalization of relations. Such a move might occur in conjunction with Xi Jinping's postponed visit to Japan. Beijing will have no inclination, of course, to soften its stance toward Tokyo on security and territorial issues. How will Japan engage with China in the altered landscape of the post–COVID-19 world? The answer could have profound repercussions not just for the bilateral relationship but for the region and the world order as a whole.

(Originally Published in Japanese. Banner photo: Chinese President Xi Jinping inspects Huoshenshan Hospital, an emergency facility built in response to the COVID-19 epidemic, during his first visit to Wuhan since the outbreak began there in late 2019. © Xinhua/Aflo.)