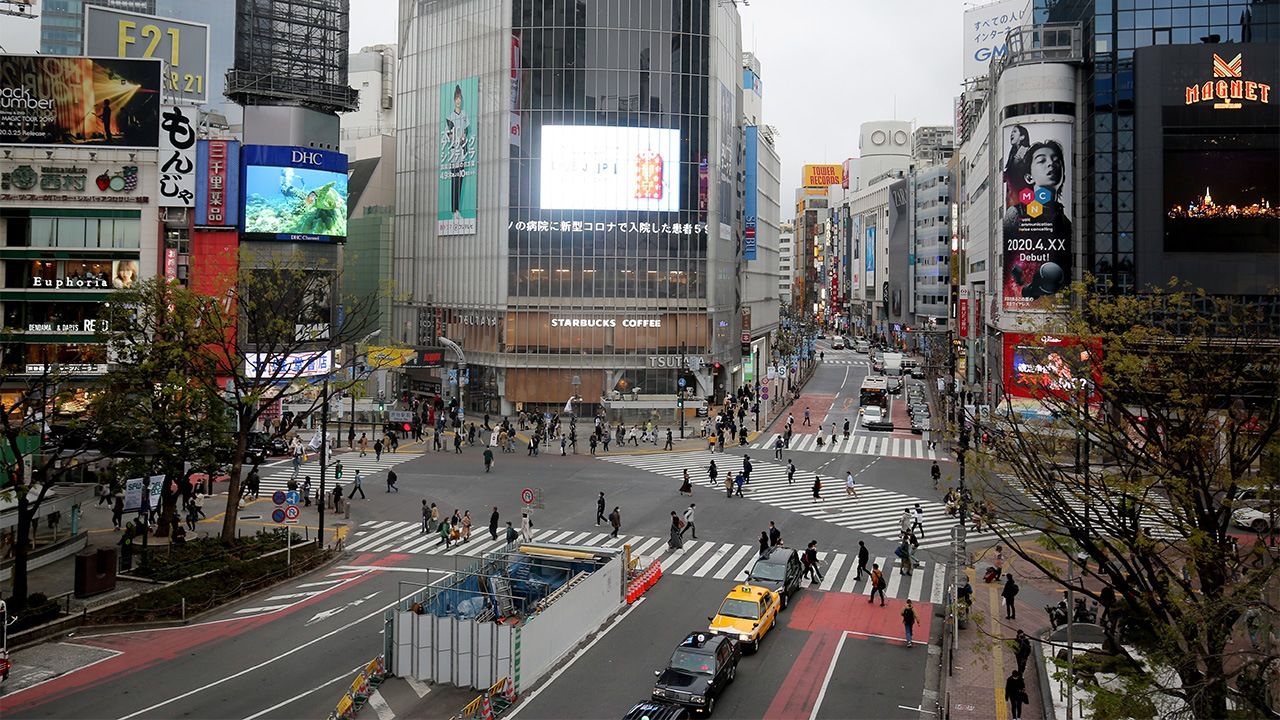 Small Businesses Battle Coronavirus and Time in Struggle to Survive

Economy Work Apr 6, 2020
The COVID-19 threat has brought the movement of people and goods to a halt, triggering a rapid economic downturn. Many businesses are suffering from falling sales; smaller businesses with limited reserves are particularly concerned about their prospects. We visited Ōta in Tokyo, where many smaller companies are concentrated, to speak with proprietors about their concerns.

March saw an increased spread of coronavirus in Japan, causing concern among smaller businesses faced with impending payments for labor and other necessities. According to the credit-reporting agency Tokyo Shōkō Research, many small firms only have cash and savings equivalent to around 1.5 times monthly sales. The national and local governments are starting to adopt measures to provide funding for such businesses. For many Japanese businesses, March is the end of the fiscal year, increasing their need for funding, while tightening supply.

The city of Ōta in Tokyo is prioritizing support for these firms, on March 9 introducing special financing to a maximum of ¥5 million. The lending rate is effectively zero, with the city covering interest. The preferential measures allow businesses to defer repayments for up to six months and give them three years to repay the loans in full. 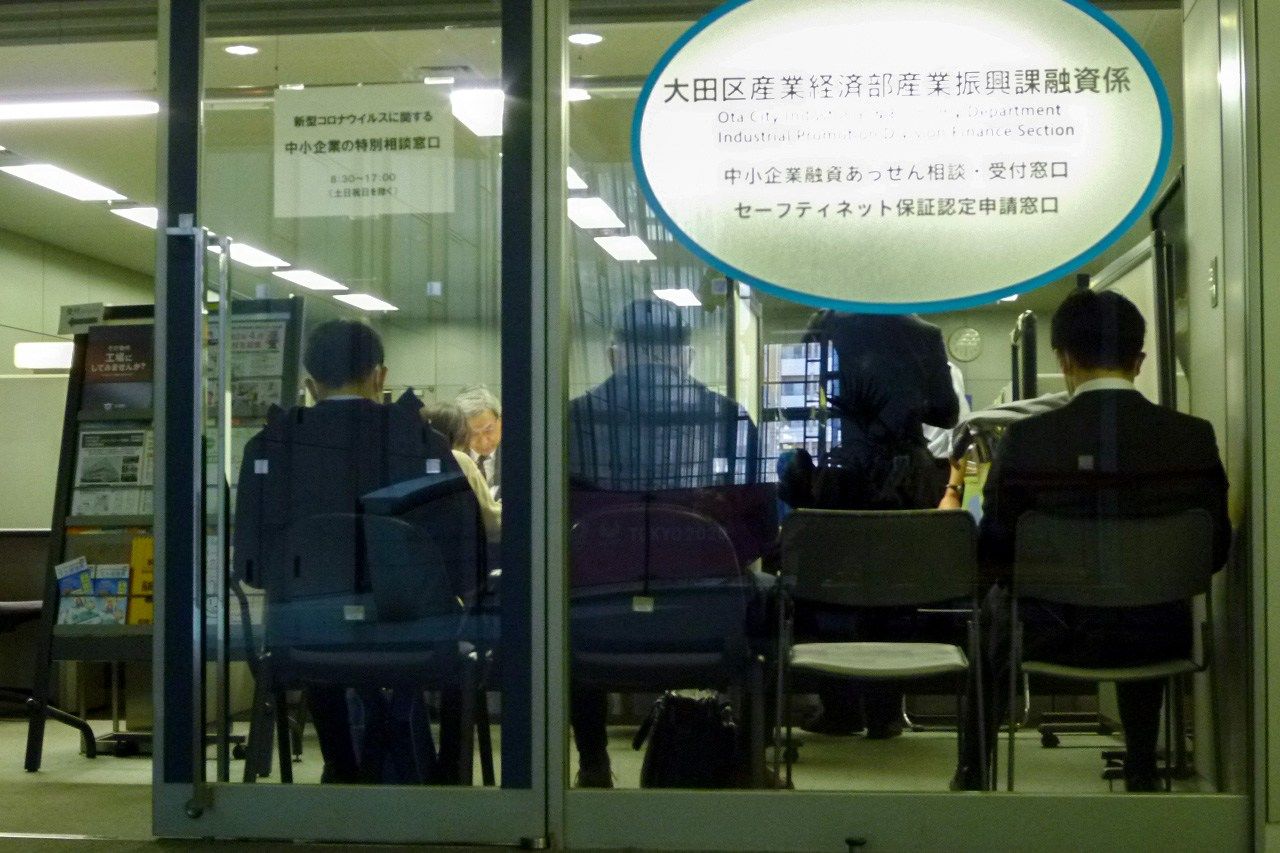 A busy inquiry counter for small businesses seeking emergency financing in the Kamata district of Ōta.

Tanaka Yūji (a pseudonym) manages a dry-cleaning firm. In late March, he and his wife visited the Ōta Industry Plaza finance inquiry counter in the city’s Kamata district. Their sales have fallen 30%–40% compared with the same month in 2019. In order to ensure their finances, they applied to the city for a loan, which was approved on the spot.

The couple were caught off-guard by the decline in people wearing business attire, a result of current government recommendations for people to stay at home. Evidently, with the increase in people remote working, fewer people are wearing suits to work, causing demand for dry cleaning to plummet. In a typical year, the Tanakas work overtime to keep up with demand, but currently, their work is finished early in the afternoon. They are at a loss as to what to do.

Cherry blossoms are blooming earlier than last year, which would usually lead to a rise in demand, as people switch their winter wardrobes for more seasonal wear. Early spring through to the start of the rainy season in June is ordinarily the peak season for dry cleaning. This period helps the Tanakas to cover losses incurred at other times of the year, so the decline is a grave concern for the couple. The special financing guarantees operational funds for now, but Yūji says he is still “extremely concerned.”

Haneda Airport, also in Ōta, welcomes vast numbers of tourists visiting Japan at ordinary times, but it is also feeling the effects of the present turmoil. Yoshii Kōichi (another pseudonym), who manages a local antique shop dealing in luxury watches, also visited the lending inquiry counter. He claims the demand he previously enjoyed from Chinese and other tourists has been devastated. The collapse of the market has kept the sellers he usually relies on for fresh stock at home; unable to source watches to sell, he basically “can’t do business.”

Suzuki Taichi (also a pseudonym), who manages a Spanish-style bar near the airport, says that in around February, Western tourists simply stopped coming. It was around the time that news of the COVID-19 outbreak on board the Diamond Princess cruise liner berthed in Yokohama was gaining significant coverage in overseas media. Although he is coping, thanks to the support of local customers, February sales were down 30% from the same month in 2019.

Since Ōta established its special loan counter, it has been inundated with inquiries. According to the city government’s Industrial Promotion Section, 102 loans were approved in just 10 days. Initially, many applications were businesses hard hit by the fall in visitors, such as retailers and food service establishments. But recently, applications from manufacturers have also increased, and now account for roughly 30% of the total. Tokyo Shōkō Research reports that smaller manufacturers nationwide are struggling to procure parts and materials due to chaos at Chinese production sites, and are unable to continue operations. 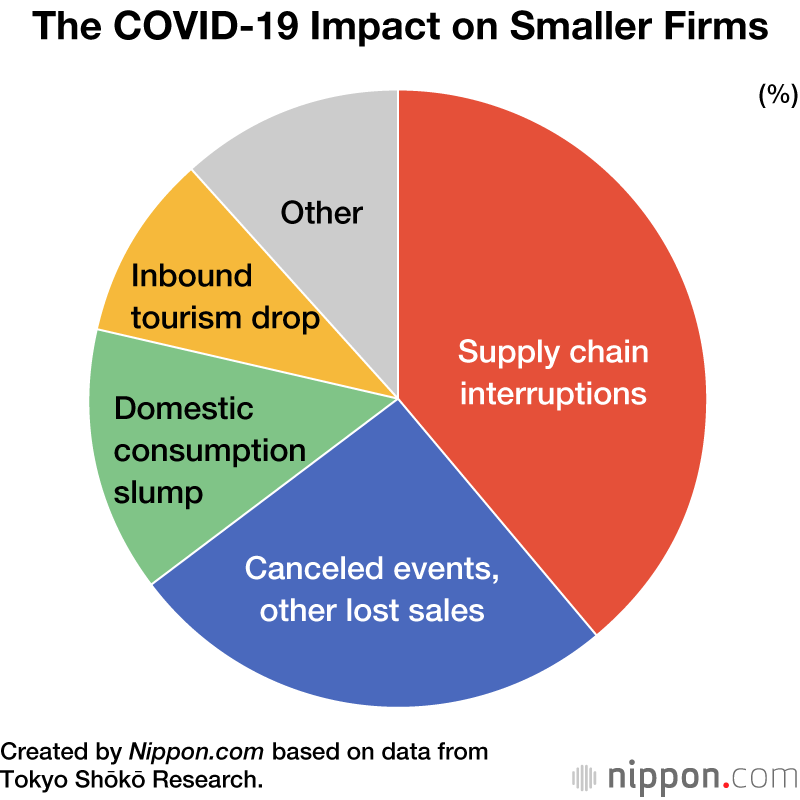 Fighting Against the Clock

The epidemic will eventually end, and people will return to their normal lives, but this depends on the effectiveness of the medical response and it is far from clear when this might happen. A meeting of experts discussing measures to deal with the coronavirus has warned of the risk of an explosion in infections in Japan’s main cities. Consequently, the government is asking for continued restraint nationwide regarding organized events, and has requested residents in Tokyo and surrounding prefectures to stay at home. But will the capital region’s small businesses be able to endure? Many proprietors are pessimistic.

Tanaka, the dry cleaner, believes that his firm could make it if conditions settle down in April and May, but he does not expect the spread of the infection to subside for some time. If limits continue on people’s movement, his business will miss the high season prior to the rainy season entirely. He believes this could lead to around half of Japan’s dry cleaners closing up shop.

Yoshimoto Hiroshi (another pseudonym) owns a bar near JR Kamata Station, in an area now almost deserted at nights. His bar’s takings halved during March. From his experience of the 2008 financial crisis, he is keenly aware that, aside from regular customers, it takes time for patronage to return to normal. He is concerned that it may take up to a year again this time.

Repayments of Ōta’s special loans will begin around September, following the six-month deferment period, but loan recipients are increasingly concerned about the degree to which trade will bounce back.

The anxiety seen in Ōta is reflected across Japan. According to a nationwide credit survey of businesses conducted by Tokyo Shōkō Research, 52.7% of small and medium-sized enterprises responded that the impact of the coronavirus was already being felt in February, when COVID-19 started to spread in Japan. Some 40% responded that sales had fallen by more than 10% compared with 2019. Inevitably, March saw a further drop in sales, due to official calls to cancel events and to restrict unnecessary outings, coupled with school closures nationwide. 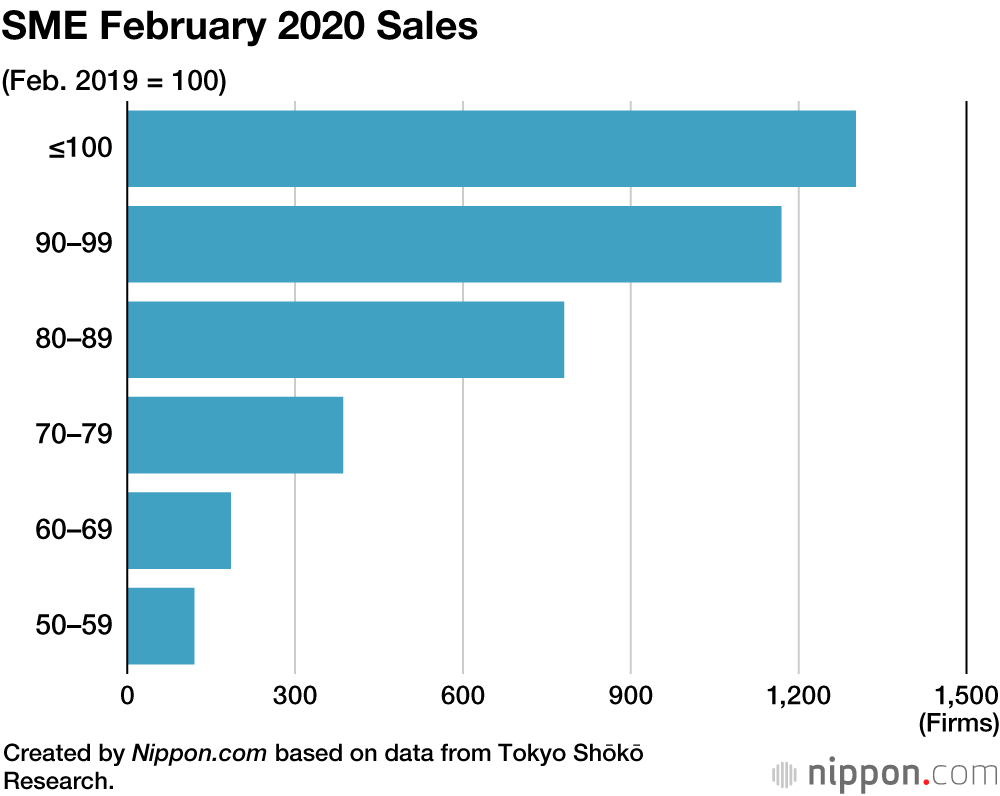 As of March 30, 17 companies had gone bankrupt as a result of the coronavirus epidemic. The first was an inn in Aichi Prefecture, which felt the effects of the sudden drop in tourist numbers from China. But the impact quickly spread to cruise companies, the tourism industry as a whole, sushi restaurants, and others. Tomoda Nobuo, head of the information department at Tokyo Shōkō Research, believes further bankruptcies are unavoidable. In addition, he expects some proprietors without a successor may decide to wind up their businesses.

Kumano Hideo, chief economist at Dai-ichi Life Research Institute, agrees with efforts by the national and local governments to provide funding to smaller firms, but believes the priority should be exhaustive implementation of testing for the SARS-CoV-2 virus to eliminate uncertainty by ensuring an early end to the spread of COVID-19. Should the situation continue as is, he holds grave concerns about employment, regardless of company size.

The Japanese government has recently formulated a revised budget with emergency economic measures, including cash handouts to affected individuals and companies, and stronger support for smaller businesses that keep workers employed.