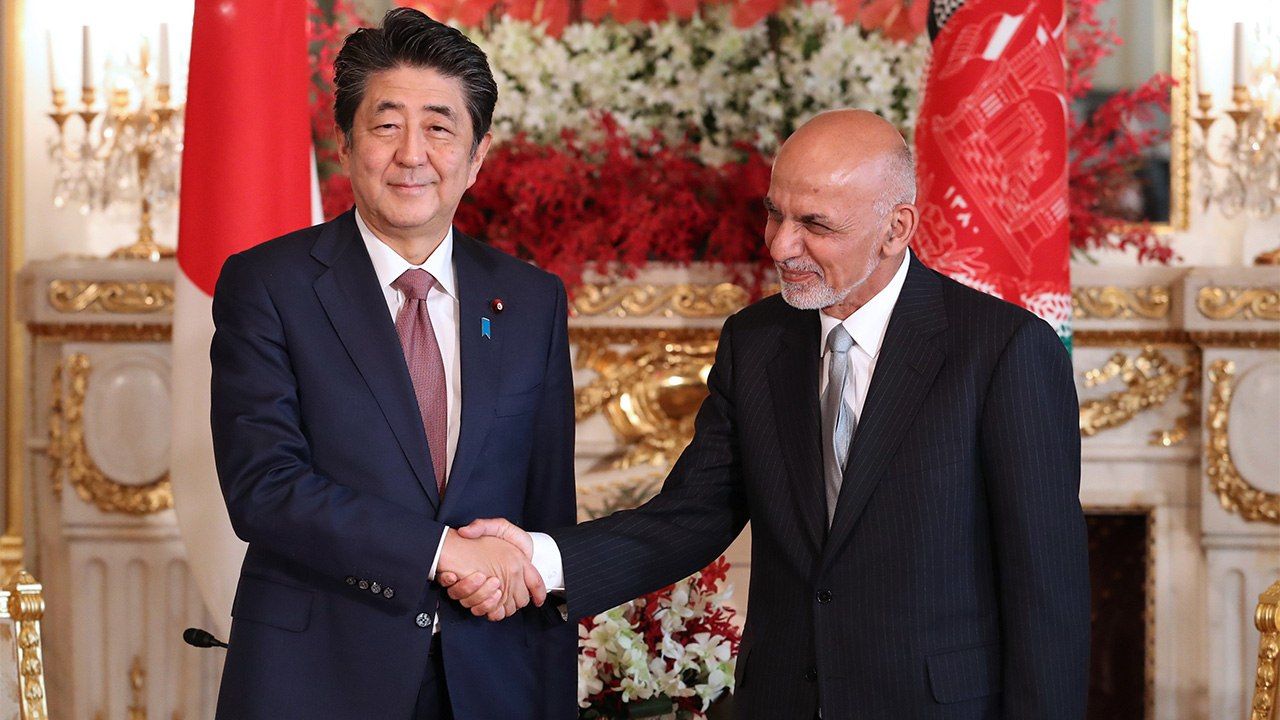 The Legacy of Ogata Sadako and Nakamura Tetsu: Japan’s Role in Afghanistan

Politics Economy World Jun 19, 2020
Last year saw the passing of two Japanese citizens who have had an enormous impact on the recovery of Afghanistan: Ogata Sadako and Nakamura Tetsu. Nakamura, in particular, was directly involved in extremely difficult aid activities on the ground in Afghanistan. Their loss also comes at an important time in reassessing what role Japan can take in helping ensure that Afghanistan does not once again become a breeding ground for terrorism.

On February 29, 2020, representatives of the United States and the Taliban signed a peace deal in Doha, the capital of Qatar, with Washington agreeing to withdraw troops from Afghanistan. In return, the Taliban agreed to work with the Americans and NATO in fighting terrorist organizations like Al Qaeda and Daesh. The agreement also includes provisions requiring the Taliban to open direct talks with the Afghan government. There are many obstacles to the success of those talks, however, including the Taliban’s continued attacks during the unrest surrounding Afghanistan’s 2019 presidential elections; the dangers of the COVID-19 pandemic; and the stalled exchange of prisoners between the two parties, which is one of the agreement conditions. Even so, the signing marked a momentous change in the 18-year conflict that has dominated US-Afghan relations.

Amid these major changes, it can be difficult to see what role Japan could possibly have. Indeed, to most Japanese nationals Afghanistan is simply one more distant foreign land. But as we will see, Japan and its people have, in fact, had a long, friendly relationship with that country.

Two Japanese at the Center of Aid

Ogata Sadako and Nakamura Tetsu were Japanese citizens who played powerful roles in Japanese-Afghan relations. However, both passed away in 2019: Ogata in October, and Nakamura in December. Nakamura’s violent death at the hands of armed insurgents was particularly shocking. These two individuals were known to a great many in Afghanistan, and now they are gone. The loss is profound.

Ogata served for many years as the United Nations High Commissioner for Refugees, and from January of 2002 she was appointed special representative of the Japanese prime minister on reconstruction assistance to Afghanistan. She continued to push for Afghan support throughout her years as president of the Japan International Cooperation Agency, as well.

Nakamura served as a physician near the Pakistan-Afghanistan border from the mid-1980s onward. During his time there, he came to see that the lack of water was holding back local agriculture, which in turn drove malnutrition and disease. He once said, “One irrigation canal will do more good than 100 doctors,” and this conviction inspired him to found the nonprofit organization Peshawar-kai, or Peace Japan Medical Services. In this capacity he personally directed large-scale irrigation projects in the region. 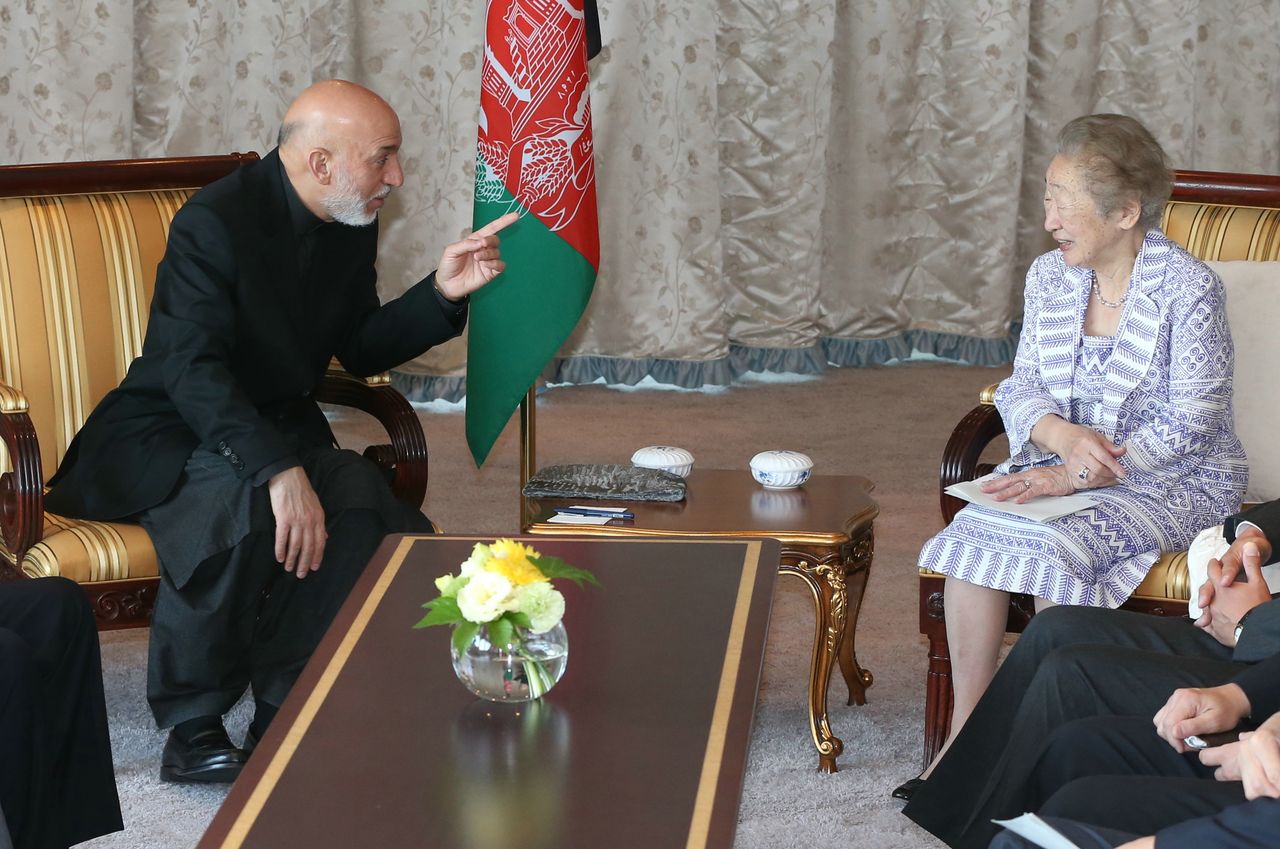 Ogata Sadako, then serving with the Ministry of Foreign Affairs, meeting with Afghan President Hamid Karzai in Tokyo on July 9, 2012. (© Jiji)

I myself have had opportunities to speak with both. During one trip to Afghanistan, Ogata happened to be in the same area, and we ended up traveling together. She told me: “There are two issues from my time with UNHCR I still need to solve. One is Myanmar’s Rohingya crisis, and the other is the Afghan refugee crisis.” I saw then for myself why Ogata was so intent on Afghanistan. I met Nakamura only a few times, but once when I asked him about the danger of his life in Afghanistan, he answered, “You can’t catch a baby tiger without entering the tiger’s den.” With this, the normally gentle man showed me the steel he had inside. 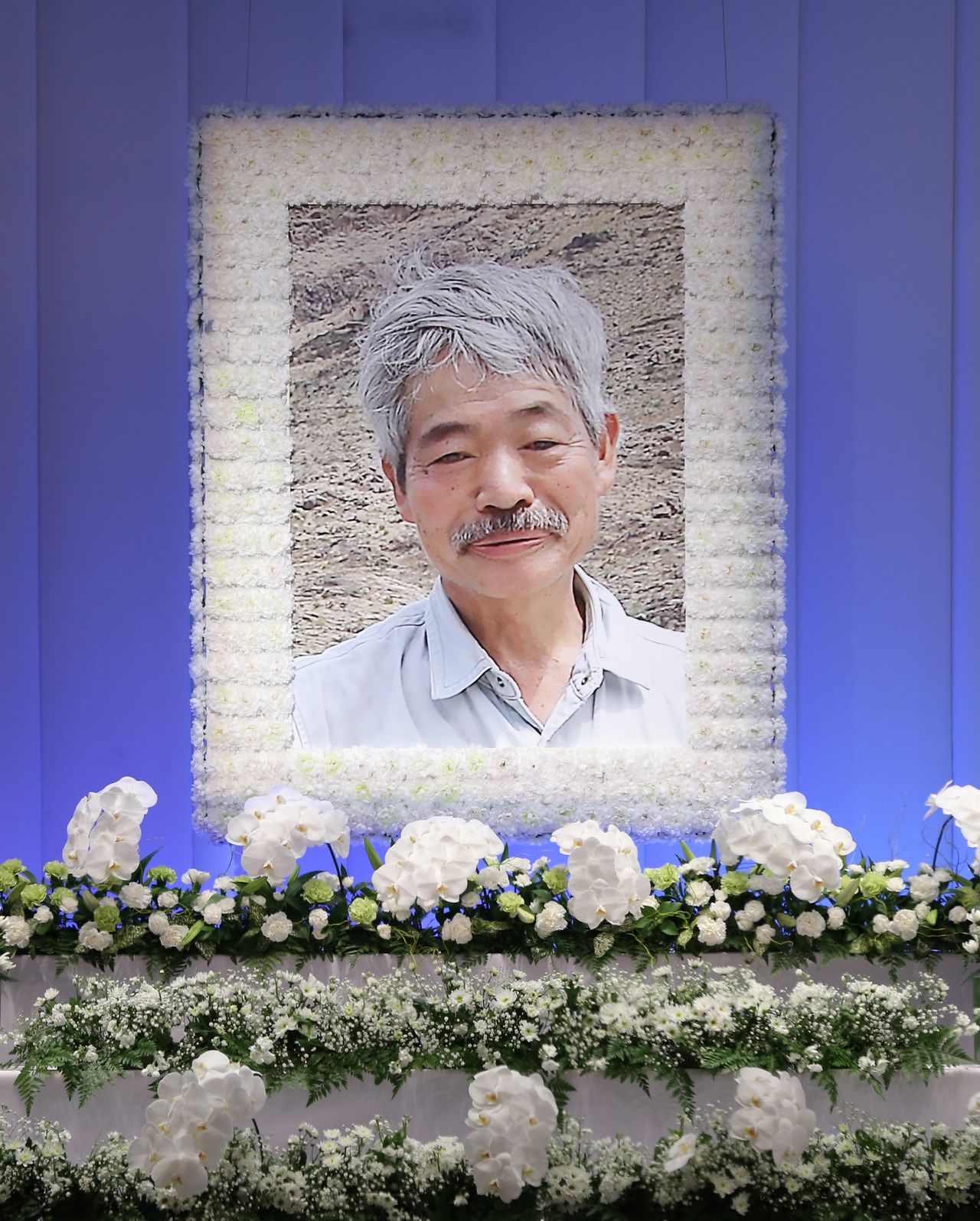 A picture of Peshawar-kai head Nakamura Tetsu displayed at his funeral in Fukuoka, Japan, on December 11, 2019. (© Jiji)

With all this work happening at the intersection of government bodies and private organizations, what further role is there for Japan and the Japanese people after the deaths of these two, who faced head-on the difficulties of the situation in Afghanistan?

Focus on Large-Scale Support After 9/11

Japan has been involved in restoration efforts in Afghanistan in cooperation with the United States and allied nations ever since the September 11, 2001, terrorist attacks, as well as engaging in diplomacy and governmental cooperation. Naturally, these efforts involved more than just members of government. Many civilians and private groups, like Nakamura and his organization, worked to strengthen ties with Afghanistan, and shared cultures while engaging in support activities. This is just one more example of longstanding ties between the two nations, though.

Japan and Afghanistan began official diplomatic exchange in 1930. Around the same time, Afghanistan invited Japanese nationals to come and share agricultural techniques and cultural activities, like jūdō. Japan also began accepting many Afghan exchange students. During World War II Afghanistan first declared its neutrality, but eventually joined the Allies at the request of the United Kingdom and Soviet Union. Naturally, this damaged its ties with Japan, then an enemy, but after the war relations were restored through economic partnerships.

However, the turmoil that rocked Afghanistan in the late 1970s once again damaged bilateral ties. In December 1979, the Soviet Union invaded Afghanistan, and in the aftermath Japan joined the United States in its boycott of the 1980 Moscow Olympics. After the Soviet Union withdrew in February 1989, Afghanistan was thrown into years of chaos as the mujahideen (an Islamic anti-Soviet faction) continued to resist government forces, and the orthodox Taliban rose to eventually take control of the nation. Afghanistan grew more and more difficult to enter, and to Japan eventually became another distant nation on the old Silk Road.

Even so, Japan continued to work for stability in Afghanistan, and proposed to mediate meetings between the opposing mujahideen and Taliban factions. Japan used the fall of the Taliban following American reprisals for the 9/11 terrorist attacks as an opportunity to restore relations with Afghanistan.

As mentioned, the Japanese government invited Hamid Karzai, then president of the transitional administration of Afghanistan, and later president in full, to the International Conference on Reconstruction Assistance to Afghanistan in Tokyo in January 2002. This marked a new period of support for nation building. Japan became a leading force in the disarming, demobilizing, and reintegration plan to help Afghan combatants return to normal society. Japan also offered support in fields like agriculture, education, health and medicine, the advancement of women, infrastructure (such as construction of the Kabul International Airport terminal building), and more. In fact, though it might not be well known to the Japanese public, the Japanese government offered official development assistance for a new capital construction plan for Kabul, as the city grew unable to accommodate its population after an influx of people from the countryside and abroad. The Japanese government has also instated a scholarship system to allow Afghan administrators to attend graduate school in Japan.

Many NGOs also became involved in various ways, including humanitarian, reconstruction, and exchange activities. Of particular note is Dōshisha University’s hosting of an international peace conference in June 2012, which marked the first official meeting between a Taliban representative and Afghan government officials after the fall of the Taliban regime. In addition, Yamamoto Tadamichi served as the UN Secretary-General’s special representative to the United Nations Assistance Mission in Afghanistan from March 2016 to March 2020, the third Japanese to lead that organization, which is tasked with overseeing and regulating international aid to Afghanistan.

The Limits and Possibilities of Japan’s Role

It should be clear that the relationship between Japan and Afghanistan thus far has been anything but loose. However, with the passage of time, aid fatigue and declining interest in Afghanistan have resulted in a global drop in financial aid to that nation, including from Japan. 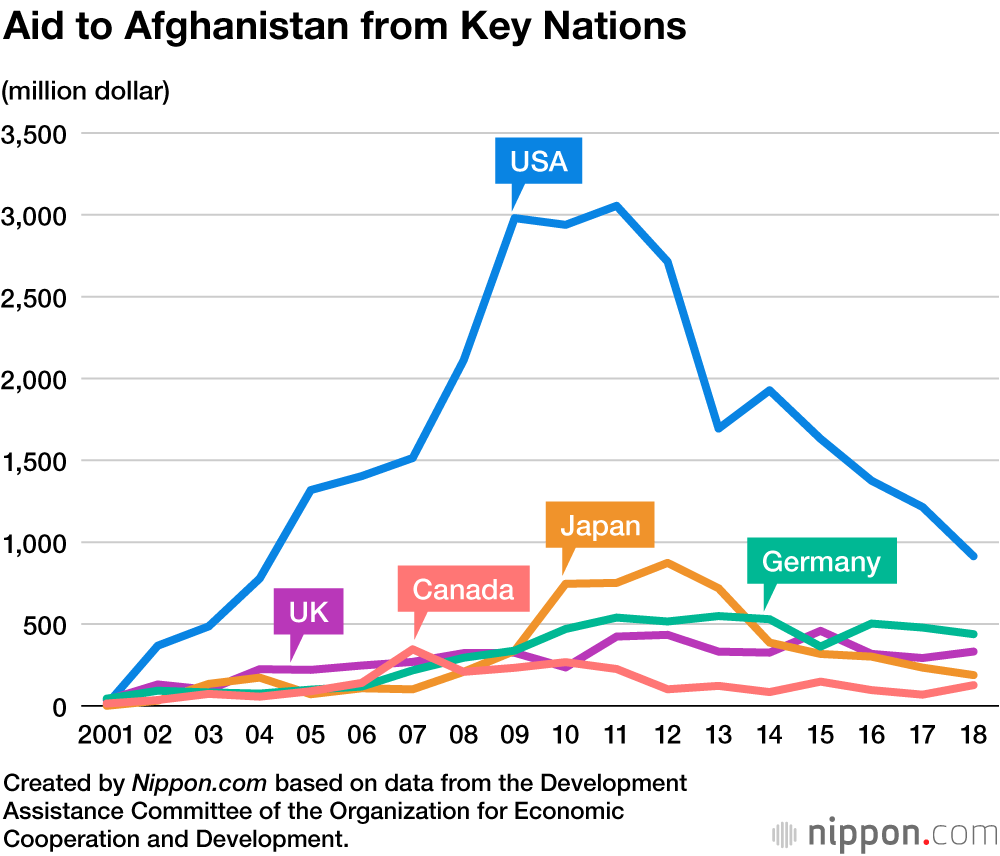 Japan now faces limited options in supporting stability in Afghanistan, considering the decreasing influence of international governments in that country and the comparative reduction of its own economic strength. Of course, support must go on, but unfortunately there is no sign that political or economic improvements are forthcoming. It is also true that even when aid is provided, corruption in the Afghan government leads to well-founded doubts about its effective and efficient use, and as Nakamura’s murder shows, there are harsh limits on how much Japanese individuals can do on the ground.

However, Japan is in a strong position to persevere in its support and continue to build bridges between opposing factions, and both the international community and the Afghan people hold out hope for that continued role. Geographically these two nations are far apart, and unlike nations in the West their mutual interests are not directly connected, but Japan still holds a favorable position with the people of Afghanistan. Japan can take advantage of that positive light to contribute to the stability of Afghanistan, thereby helping to build broader peace across South and Central Asia and in the Middle East.