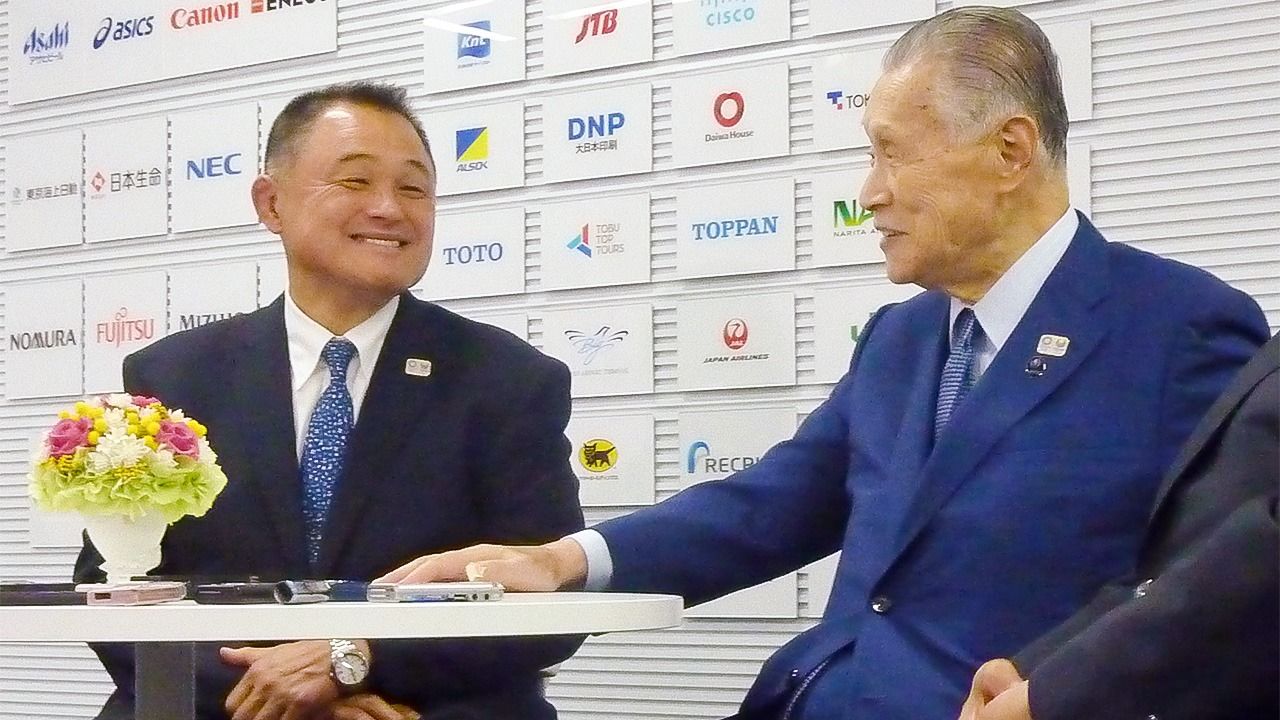 Forgetting the Lessons of Moscow: Olympics Under the Shadow of Politics

Politics Sports Tokyo 2020 May 21, 2020
Amid the ongoing COVID-19 pandemic, Prime Minister Abe Shinzō and International Olympic Committee President Thomas Bach agreed on a one-year postponement of the Tokyo Olympics. However, Japanese Olympic Committee President Yamashita Yasuhiro was not included in that decision. This is a troubling exclusion for the JOC, which should be at the center of the host country’s Olympic efforts.

Starting on the Government’s Schedule

On the evening of March 24, four people joined Prime Minister Abe Shinzō in the Prime Minister’s Residence for a conference call with International Olympic Committee President Thomas Bach. Those four were Mori Yoshirō, president of the Tokyo Organizing Committee of the Olympic and Paralympic Games (TOCOG); Governor of Tokyo Koike Yuriko; Hashimoto Seiko, minister in charge of the Tokyo Olympic and Paralympic Games; and Chief Cabinet Secretary Suga Yoshihide. Apart from the four current politicians, Mori is not only a retired member of the Diet, but also a former prime minister. Based on the list of attendees alone, the meeting was a most likely a politically motivated one.

The Host City Contract establishing Tokyo as the 2020 Summer Olympics venue was signed by the IOC, the Tokyo Metropolitan Government, and the JOC. The addition of TOCOG, which was created following that contract and added in a joinder agreement, brought the number of agreeing parties to four. Since the Japanese government is not one of those parties and is only playing a supporting role, the prime minister taking a direct hand in key negotiations would normally be considered an action in excess of his authority.

After weeks of resistance by politicians, the games were finally postponed until the summer of 2021, with the Olympics set to run from July 23 to August 8 and the Paralympics from August 24 to September 5. Mutō Toshirō, director general of the organizing committee, explained the dates at a press conference. “There are Tokyo Assembly elections in June and July, and assembly members’ terms of office end on July 22. It would be inappropriate to hold the games before then,” he said, making the political reasoning behind this schedule clear. In addition, Prime Minister Abe’s term of office as president of the Liberal Democratic Party—and thereby as prime minister—also expires in September of next year, leading to speculation that he might be viewing this as an opportunity to use the games as his swan song from the political sphere.

The Frustrations of Moscow

There is a previous example of controversy surrounding the mixing of politics and the Olympics: the boycott of the 1980 Moscow games. After US President Jimmy Carter called for an Olympic boycott to protest the Soviet Union’s invasion of Afghanistan, many Western Bloc nations like Japan, South Korea, and West Germany followed his lead. In the end, only 80 nations participated.

At the time, the Japan Amateur Sports Association was under the administration of the former Ministry of Education, and the JOC was merely one part of JASA. Its role was to distribute government training subsidies to JOC member sports federations. Figures in the athletic world insisted that Japan should participate in the Moscow Olympics, but in the end the threat of subsidy cuts from Japan’s America-friendly administration and JASA led the JOC members to vote to boycott.

The Japanese athletes were not the only ones to feel frustrated at political involvement. Many athletes from Western Bloc nations who did join, like those from France, Italy, Spain, and Australia, appeared under the Olympic flag and marched to the Olympic theme, rather than their own national colors and anthems. This was a clear expression of the desire to keep sports independent and separate from the world of politics.

After the games, many in Japan’s sports world felt it was time to establish the JOC as an independent organization free of political influence. In 1989, the JOC received permission to incorporate as a nonprofit organization with budget oversight independent from JASA. The first president was Tsutsumi Yoshiaki, a giant of finance and head of the Seibu Corporation. Under Tsutsumi’s leadership, the organization began a clear movement toward independent management, with business initiatives like the “Ganbare! Nippon!” campaign, which used athletes’ likenesses in advertisements to earn money for training costs.

The Return of Political Influence

However, the collapse of the bubble economy led many companies to disband their sports teams in the late 1990s, disrupting the corporate leagues that were the competitive basis for many top athletes. Later, the global financial crisis touched off in 2008 brought another shakeup, and the financial support structures for athletes faced even greater difficulty. This uncertainty created an economic opening for a return of politics to sports.

The real turning point came in 2005, however. Even after Tsutsumi retired from the JOC, the charismatic businessman continued to wield influence over the sports business as an honorary president of the committee. In March 2005, though, he was arrested for violations of securities trading law. He subsequently lost all standing with the JOC, and the drive toward civilian management began to falter.

Then, in April, Mori Yoshirō took over as president of JASA. The former prime minister had been president of the Japan Rugby Football Union and an executive board member of the JOC. Soon other LDP politicians began taking positions at the top of various national sports federations. The sports world was shaken up as in one sweep Asō Tarō took charge of the clay pigeon shooting and basketball federations, Kōno Yōhei became head of athletics, Yamasaki Taku became head of softball, and Abe took over the archery federation. Eventually, the sports federations began to see that having politicians at the top eased the way to receiving subsidies from the federal government.

The Sports Council Lottery (popularly known as Toto) accelerated the political management trend. Lottery tickets based on picking winners in professional league play went on sale nationwide in 2001 under the administration of the Japan Sport Council, an independent administrative corporation connected to the Ministry of Education, Culture, Sports, Science, and Technology. Sales were slow at first, but with the 2006 release of the Big ticket, with a jackpot of ¥600 million, they skyrocketed. The JSC soon had funding to spare.

With that economic clout, the government-run JSC gained stronger influence over the sports world, and from 2015 it was given sole control of distributing training cost subsidies to JOC member sports federations. The JOC’s prominence faded even further.

The current JOC president, Yamashita Yasuhiro, had been chosen to represent Japan in men’s jūdō for the Moscow Olympics, and he won fame for appearing at the JOC boycott meeting to argue for participation, along with gold medalist wrestler Takada Yūji (now a top official at the Japan Wrestling Federation and a JOC executive board member). However, pleas from Japan’s sports world went unheeded, unlike in Britain and other participating nations.

When it came to postponing the Olympics, it seems that the voices of the athletes and federations were ignored once again. While the administration was insisting that the Olympics would go on as scheduled, Yamaguchi Kaori—another member of the JOC executive board who represented Japan in women’s jūdō at the Seoul Olympics—was the only member openly calling for a postponement. President Yamashita avoided taking the side of the sports federations, saying only that this was an “extremely unfortunate” situation to come in the midst of such hard work. Having bowed to the administration’s will to the very end, perhaps “extremely unfortunate” is an apt comment for the JOC president, who seems to have forgotten the lessons of Moscow.

The contrast with world athletes and IOC members calling for a postponement on social media and elsewhere, pointing out the danger of the spreading epidemic, is striking. A major voice of that movement was World Athletics President Sebastian Coe, a legendary British runner who took gold in the 1,500-meter event at the Moscow games. He wrote a letter to the IOC in which he delivered a clear statement on the need to put athletes and athletics first: “we cannot hold the event at all costs, certainly not at the cost of athlete safety.”

As the scope of the Olympic Games continues to expand, it will become more and more difficult to host them without governmental support. However, no matter what the circumstances are, it is imperative that the games remain under control of the athletes and the sports organizations.

The essential role of each country’s national Olympic committee is not just to select and send its national athletes to the games. The Olympic charter outlines a variety of responsibilities connected to the games, including enhancing the values of the Olympic Movement, educating youth, supporting the development of sport for all, training sports administrators, acting against any form of discrimination or abuse in sport, ensuring compliance with the World Anti-Doping Code, supporting measures relating to the medical care and health of athletes, and many more.

It also clearly states: “The NOCs must preserve their autonomy and resist all pressures of any kind, including but not limited to political, legal, religious, or economic pressures which may prevent them from complying with the Olympic Charter.”

Planning in the Time of Corona

The Abe administration has made a political decision to postpone the games for one year. The official IOC website states: “Our Japanese partners and the Prime Minister made it very clear that Japan could not manage a postponement beyond next summer at the latest.” However, there is no knowing when the pandemic might ease. What happens if no progress is made on a vaccine or treatment, and the situation has not improved by next summer?

The politically managed Tokyo Olympics and Paralympic games continue to face challenge after challenge, and it is becoming clear that the persistent cloud of obscurity closing their management off from sports leadership is detrimental. As the main organizer of the games, the JOC has a duty to respond to the voices of athletes. For that, it will need the courage to assert its autonomy and to rebuild its independence and influence.