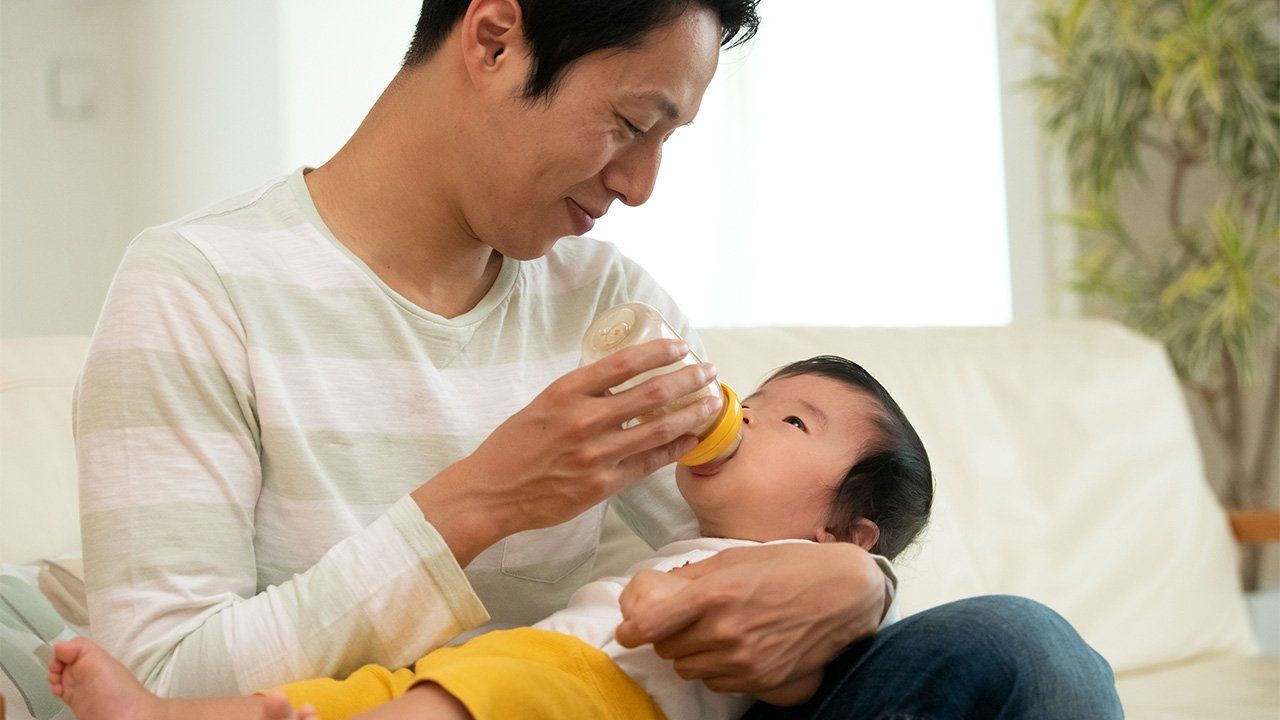 Lifestyle Family Work Sep 18, 2020
Japan’s childcare leave allows workers to remain at home until their child reaches one year of age and guarantees a maximum of 67% of regular monthly salary in unemployment benefits for the first six months. However, few men take advantage of the generous system, and experts are considering ways to encourage more fathers to take time off for childcare.

Japan boasts a progressive parental leave system, but only a small portion of fathers ever use it. Just 6.2% of eligible men took leave in fiscal year 2018, compared to 80% of eligible women. The Japanese government has rolled out various initiatives in the hope of boosting this ratio to 13% by the end of 2020. However, it appears unlikely that this target will be achieved. 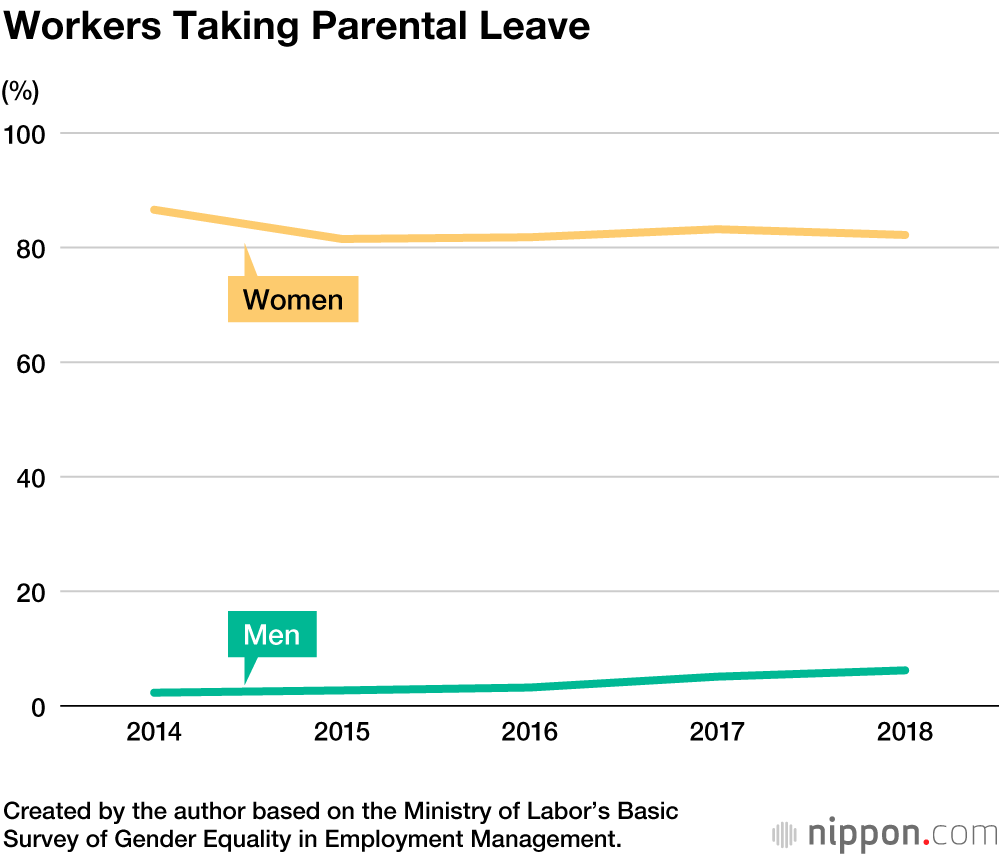 Even when fathers do take leave, it tends to be for only short periods. In 2018, about 70% of men who went on paternal leave did so for less than two weeks, and most stayed away from work for less than five days, similar to the amount of time a worker might spend on vacation. By comparison, about 60% of mothers took parental leave of around one year. 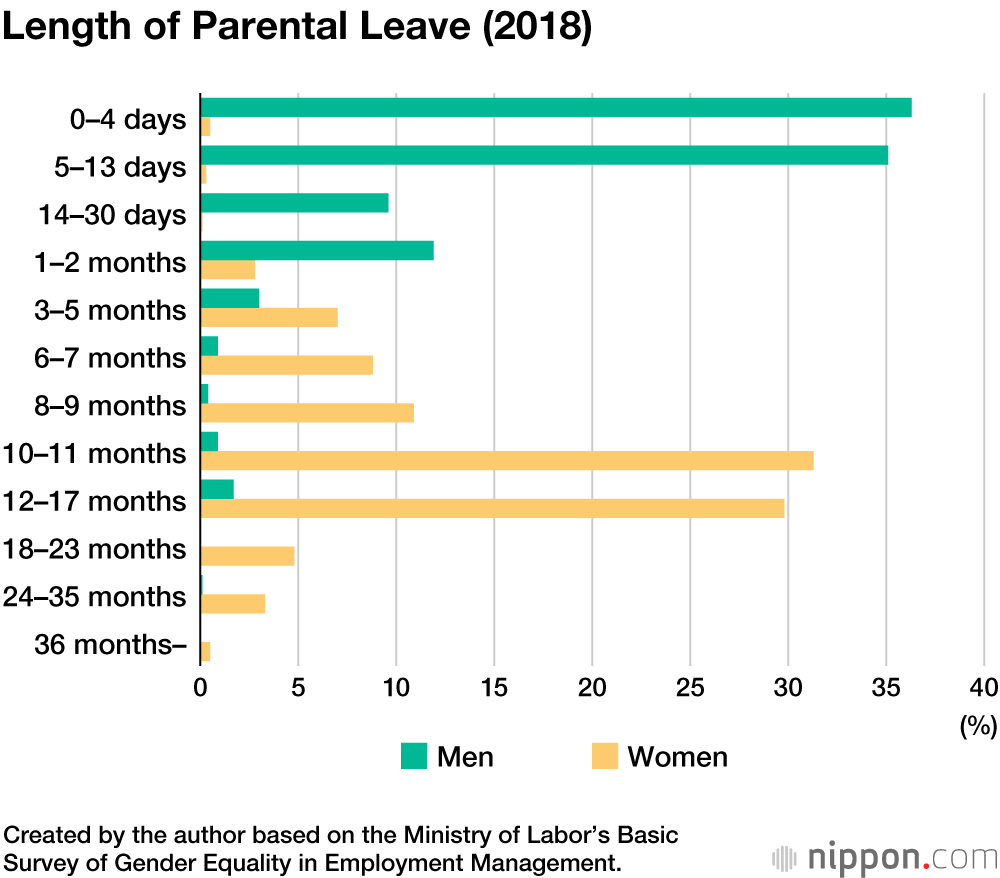 Japan’s Child Care and Family Care Leave Law guarantees workers parental leave and provides for childcare leave benefits until a child reaches one year of age. Workers enrolled in employment insurance are eligible for benefits equal to 67% of their regular salary for the first six months and then 50% for the following six months. In reality, though, the benefit payments equate to 80% of normal take-home pay as they are not subject to income tax and are also exempt from company social insurance and employment insurance premiums.

In a bid to boost the overall number of men taking childcare leave, the government in November 2019 unveiled new measures encouraging male public employees to take at least one month of paternity leave. In March 2020, a Liberal Democratic Party project team on parental leave recommended authorities urge fathers to take four weeks of leave after their partner gives birth by increasing benefits equal to 100% of their usual salary. The group also called on legislators to address social pressures like traditional gender roles and workplace conditions including excessive individualization of duties that make it difficult for men to apply for paternity leave,.

Recent work-style reforms like the Act on Promotion of Women’s Participation and Advancement in the Workplace have made it easier for employees to take family leave or work reduced hours for family reasons. However, even with these systems in place, the pervasiveness of old-fashioned corporate norms and traditional views that childrearing is women’s work can make it difficult for male workers to take advantage of them. It is not unusual for men who take several months of leave to complain of discrimination upon returning to the office and wind up leaving their jobs.

Government calls to increase Japan’s meager birth rate seem futile under such conditions, especially as huge swaths of the workforce are still required to put in incredibly long hours. Many companies still consider workers who spend vast amounts of time at their desks toiling away and who rarely take days off as the most productive. This is based on the antiquated assumption that output and quality are directly determined by how long a worker spends on a task.

In Japan, there is a strong need to reconsider how worker performance is measured. For instance, one employee may spend more time on a task to achieve the same output and quality level as a more efficient colleague, accruing hours upon hours of overtime pay in the process. However, the company would not need to compensate the highly productive worker as much for the same amount of output, and everything else being equal, this would appear to be a more valuable standard for assessment than hours logged. In fact, prevailing labor trends are moving away from overtime and toward practices like flexible schedules that promote a better work-life balance. Japan will find it difficult to compete globally amid the rapid digitization of work through the adoption of artificial intelligence and the Internet of Things without a greater focus on individual productivity.

At the same time, the pandemic has spurred unexpected reforms in conventional working styles. The Japanese government declaring a state of emergency in April put pressure on companies to adopt remote work to help curb the spread of the COVID-19. Many of the changes to the work environment, including telework, have long been promoted as part of broader work-style reforms, and with the health crisis expected to continue into the foreseeable future, it is likely that firms will make these policies permanent.

As fewer workers commute to offices, companies will have to reform their task-management and assessment criteria from a time-based valuation to a Western-style, results-based system that rewards productivity.

The ability of employees to decide when and where they work will result in a greater diversity of workers and working styles, and will almost certainly change established customs and values. Free from the need to travel to work, female employees can more easily return to their careers after giving birth and while raising small children. It could also put an end to the need to resign from work to take care of elderly family members.

This latter fact will be increasingly important to traditional corporate structure in light of major changes in elder-care trends in recent years. According to the Ministry of Health, Labor, and Welfare’s 2016 Comprehensive Survey of Living Conditions, up to the early 2000s the primary elder-care giver in most families was a daughter-in-law. However, in recent years sons have become the leading caregivers, creating an unprecedented situation where droves of men are having to juggle careers and looking after an older parent.

Men in their fifties account for the core of this group. They also constitute the largest portion of employees in managerial positions, and companies are going to have to change their priorities or risk losing a vital human resource group. Even if these men are working shorter hours while caring for parents, they are still able to apply their management skills in leading their teams and achieving real results. This is one more illustration that it is time for Japan to move on from its traditional working style of using time spent on a task as a basic assessment criteria.

Many men say that they hesitate to take paternity leave because they are worried about loss of income. The loss of a husband’s income obviously puts unwanted strain on a household’s budget. However, even if paternity leave results in a short-term drop in income, there is evidence showing that it could lead to an increase in lifelong earnings.

A female college graduate who has two children and who takes advantage of maternity leave and short working hours to continue working full time can expect to earn over ¥200 million by the time she retires. However, if she chooses to resign after giving birth and works part time once her children are more independent, her lifetime income will fall to around ¥60 million. Even accounting for the loss in income when a man takes paternity leave, a woman remaining in her position at a company equates to over ¥100 million more in overall earnings. Knowing this, many husbands would likely rethink their reluctance to take time off for childcare to help their wives continue their careers. Modern families are often burdened with heavy debts, and research shows that many younger families need two incomes to maintain stable household finances.

A health ministry longitudinal survey from 2017 shows that more women return to their careers after giving birth when their husbands devote time to housework and childcare. In particular, if a husband takes leave right when the mother returns to work, it can help smooth her transition back to her career. The Cabinet Office’s Declining Birthrate White Paper from 2019 also explains that a husband spending time on housework and childcare can make it easier for a couple to have a second or third child. 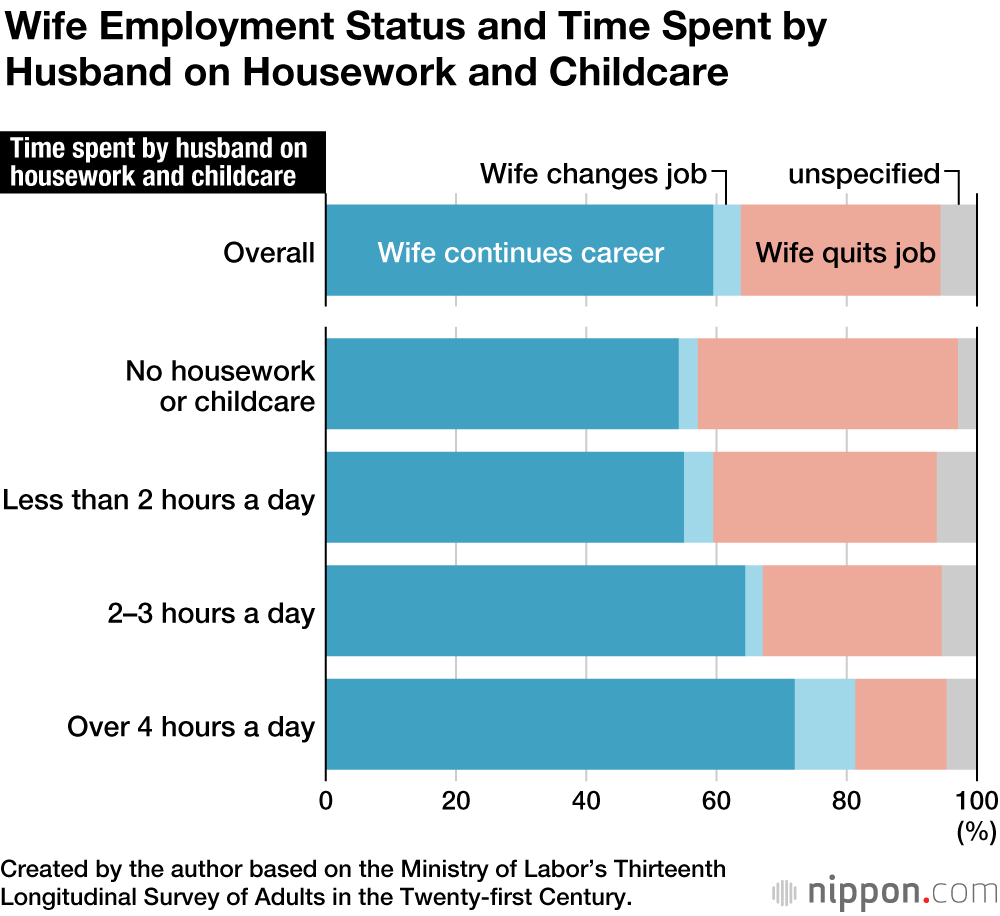 However, there has emerged the issue of husbands who take leave but do not actually help with housework and childcare, treating it instead as a kind of vacation. One way to combat this would be for local governments or maternity hospitals to teach fathers how to care for infants and about the changes that occur to women’s bodies after birth. Fathers may be more proactive in childcare and housework if they knew in advance what they should be doing. It might also be a good idea to adopt the suggestion by the LDP group of changing the name of parental leave in Japanese, which includes the term “holiday” (yasumi), to avoid misunderstanding.

It is also important to emphasize to companies the benefits of allowing employees to take leave. Caring for a newborn infant is a 24-hour job, and days can go by without a proper night’s sleep or set times for meals. Parents must be able to quickly do what housework and self-care they can while the infant is sleeping. The experience of quickly adapting to handling many new tasks in short periods of time actually leads to many employees to be more productive after returning from parental leave.

Parental leave is not a vacation, but a temporary separation of an employee from the workplace. Viewing it as a practice that it carries a number of benefits both for employers and workers could represent a major revolution in the workplace.