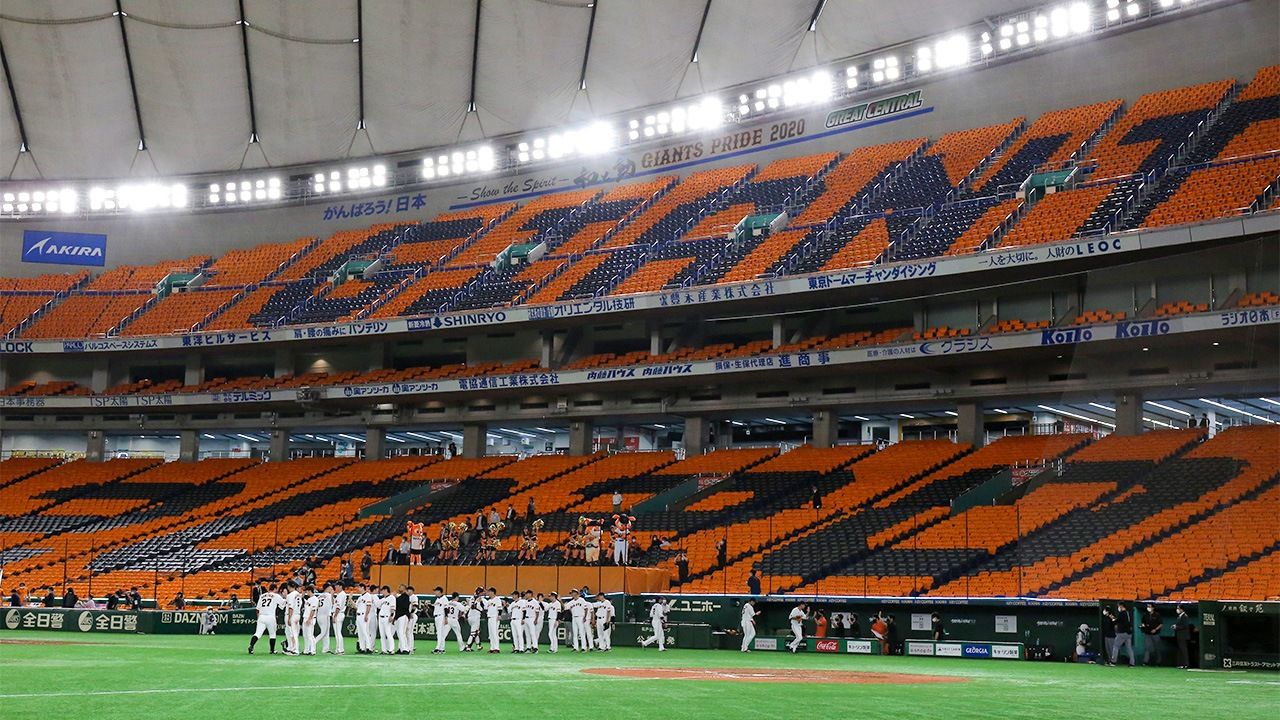 Sports Society Health Culture Lifestyle Jul 22, 2020
Professional sports leagues are finally starting up again after suspending play because of the coronavirus pandemic. However, fan attendance is being limited to curb the spread of the virus, raising concerns about how pro sports can survive in the corona age.

The Japanese professional baseball season finally got underway on June 19 after a three-month delay due to the coronavirus. In the opening matchup, the Yomiuri Giants of Tokyo took on their Osaka rivals the Hanshin Tigers. As the teams took the field under the bright lights of the Tokyo Dome, the distinct clamor of Japanese baseball—chanting, trumpets, and plastic noisemakers—was strangely absent. In an unprecedented situation, the clubs played to an empty stadium, the normally muffled sounds on the diamond echoing strangely through the vaulted venue.

In an attempt to recreate the familiar ballpark atmosphere, a giant LED screen erected behind home plate projected images of cheering fans. The Giants’ cheerleaders were in attendance, performing with their usual zeal to seats sporting black and orange covers to appear less empty. Whenever there was an exciting moment in the game, the dome’s loudspeakers would come to life, filling the air with the exuberant roar of an unseen crowd.

The rash of coronavirus-postponed seasons and subsequent loss of ticket revenues has strained the finances of many professional sports organizations. Determined to make the best of a bad situation, Nippon Professional Baseball teams have attempted to spice up crowd-less games. At the matchup between the DeNA Baystars and Hiroshima Carp at Yokohama Stadium, home team DeNA filled infield seats with 5,000 giant cardboard photographs of fans. The club also offered a livestream of the contest to supporters featuring play-by-play commentary by former star players. Fans wishing to feel more part of the action could log on to the Zoom videoconferencing platform and have their images broadcast on the stadium’s jumbo digital screen.

At Osaka’s Kyocera Dome, the ceremonial first pitch in the season opener between the Orix Buffaloes and Rakuten Eagles was thrown “virtually.” Rakuten fans joined the action in Sendai by attending a public viewing of the ballgame at the team’s home stadium, with spectators spaced apart to ensure social distancing. In Fukuoka, the SoftBank Hawks made the hardy ballpark fare of the PayPay Dome available on a drive-through basis so hungry fans could enjoy familiar game-day flavors while cheering the team at home.

Japan’s professional baseball teams are not alone in getting creative. In Taiwan and South Korea, clubs have adopted approaches like deploying cheerleaders and photographs of supporters to bolster stadium ambience amid restricted attendance. In an unexpected turn, the leagues have attracted the attention of baseball devotees overseas. The Taiwanese and South Korean seasons start earlier than the NPB and US Major League Baseball. As Japanese and American clubs hit the pause button due to the coronavirus early in the preseason, broadcasts of these games generated interest among baseball-starved fans in other countries. Taiwan’s professional league began livestreaming games with English commentary on a pay-per-view basis, and the broadcasts soon became an Internet sensation, with US viewers, who because of the time difference tuned in during the morning hours, dubbing the matchups “breakfast baseball.”

The US-based sporting channel ESPN has also joined the party. The network bought the broadcasting rights to South Korea’s professional baseball league, the Korean Baseball Organization, and is airing games in some 130 countries and territories. These efforts illustrate the strong desire of clubs, leagues, and broadcasters to turn the adversity of the coronavirus pandemic into an opportunity for growing the global reach of the sport.

European soccer is also getting inventive. In a novel take on augmented reality, a Spanish broadcaster that carries matches of Spain’s La Liga recently joined forces with the developer of soccer video games to overlay graphics of spectators onto empty stands, adding sounds of cheering for good measure.

Not to be outdone, Japan’s J. League, which suspended games in mid-February before restarting on July 4, is also exploring new approaches for virtually filling stands. Yamaha Corporation, sponsors of second-division side Júbilo Iwata, has developed what it calls “remote cheering technology” to alleviate the problem of empty seats. Using a dedicated mobile app, viewers at home can broadcast their voices or clapping over the stadium speakers. Yamaha, a well-known maker of musical equipment, also envisions using the system for nonsporting events like concerts.

Sporting event organizers must exercise judgement and restraint when trying new approaches, however. Taken to the extreme, such gimmicks can easily detract from the enjoyment of the game. Previously, a Japanese TV network staged concerts featuring idol groups ahead of broadcasts of Japanese national volleyball team matches. Instead of building excitement, though, the performances attracted the ire of television audiences. Similarly, a Japanese broadcaster’s decision to send female newsreaders clad casually in traditional yukata to interview players during a recent NPB All-Star series was poorly received and even drew complaints from the players union. To appeal to fans requires more than simple stunts. Rather, clubs, broadcasters, and event organizers must convey the true spirit and essence of the sport.

Lessons Learned from the Major Leagues

Under the Japanese government’s schedule for relaxing coronavirus restrictions, as of July 10, up to 5,000 spectators or half of venue capacity can attend professional sporting events. From August, the cap will be eased further to 50% of capacity, irrespective of venue size. However, with seasons already truncated, clubs are expecting to suffer a significant drop in revenue. Financial woes will only be exacerbated if a second wave of infections requires a return to empty stands.

Japan has seen a steady increase in the number of people willing to pay for live entertainment, be it sporting or musical. As a result, greater emphasis has been placed on growing the “ground offensive” (live entertainment) rather than the “air offensive” (televised entertainment). However, the coronavirus pandemic has turned this model on its head. Restrictions to prevent the spread of infections will likely weigh on sports ticket sales for a long while to come. Fewer spectators also means that clubs and venues will miss out on lucrative earnings from the sale of merchandise, food, and beverages. At the same time, without supporters in stadiums, it is difficult for teams to gauge fan sentiment, and if leagues are not careful, they could find after the pandemic has subsided that their fanbases have moved on to newer pastures.

The MLB’s response to the coronavirus provides a stark example of a league losing sight of fans. The delay of the 2020 season as a result of the coronavirus led the league and the Players Association to agree to pro-rate salaries based on the number of games played. When negotiations broke down, however, MLB Commissioner Rob Manfred suggested the season should be cancelled outright. With talks going nowhere, the league decided to push ahead, arbitrarily exercising its right to set the opening day and slashing the normal 162-game schedule by nearly two-thirds. Owners and the Players Association eventually signed off on the MLB’s plan for a 60-game season, which is set to get underway on July 24.

Of course, in the world of major-league sports, billions of dollars are at stake. However, both the MLB and the Players Association in setting their priorities on money failed to consider what fans, the core of their business model, might want. Japan’s professional sporting bodies need to learn from this lesson and remind themselves as professional athletes of their duties to their supporters.

The J. League and NPB have jointly established a COVID-19 action committee to assess how to respond to coronavirus based on the advice of specialists. During the professional baseball season, all players, umpires, and staff will undergo PCR testing once a month. The J. League has established its own PCR testing center, and players and staff will be tested once every two weeks. While baseball and soccer have drawn up comprehensive manuals and protocols, more measures need to be put in place to deal with clusters of infections arising within sports teams, and there is a need to better define the conditions for cancelling the season.

Looking at other professional sports, I note that this year’s July sumō tournament, which normally takes place in Nagoya, has been moved to the Ryōgoku Sumō Hall in Tokyo instead. Sumō stables present a high risk of infection as wrestlers live and eat in close quarters, and there is also the obvious situation of rikishi colliding and wrangling with each other during matches. One wrestler has died from complications due to the coronavirus, making it vital that the sport place the utmost importance on preventing infections.

The professional basketball B. League decided to pull the plug on its season earlier this year, but is planning to start anew in October. Basketball is a relatively new professional sport in Japan with games played in smaller venues and fans packed close together. I hope the B. League is able to put in place preventative measures while retaining the confidence of its fans.

With no sign that the pandemic will end any time soon, we can all expect to live with the virus for a while to come. However, it is not only professional sport that is affected. Many forms of entertainment must work out how to survive in the age of online audiences and empty venues.

(Originally published in Japanese. Banner photo: The Yomiuri Giants celebrate in their win on June 21 in an empty Tokyo Dome. © Jiji.)