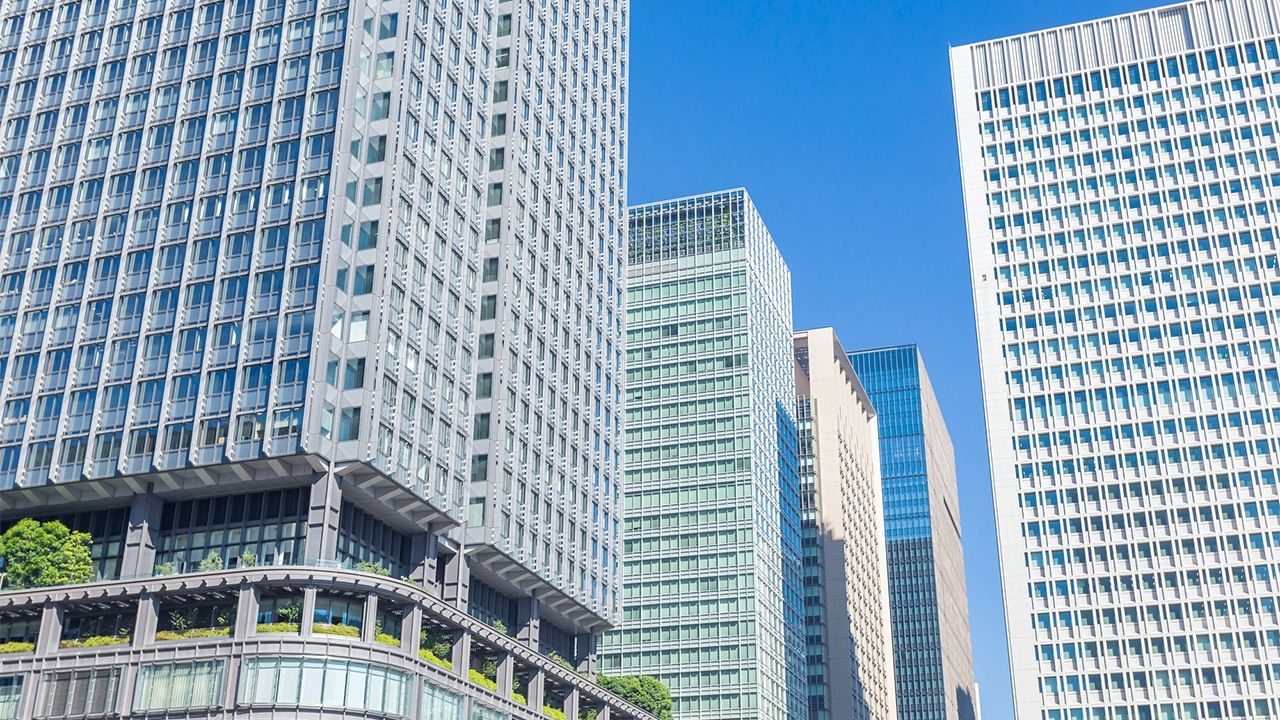 Office Demand in the Post-Coronavirus World

Economy Society Sep 18, 2020
The office market has a major impact not only on the real-estate sector but also on real estate investment trusts and other parts of the finance sector. But future demand for office space is now in doubt amid the COVID-19 pandemic, which has resulted in plummeting profits for many corporations and a rapid increase in telework. This situation has led many to question whether conventional offices are really necessary.

The effect of the COVID-19 pandemic on economic activity has been severe, resulting in rising unemployment and a contraction in the number of employed persons. Here I want to consider the future trends in the office market and changes in the underlying office demand.

Office buildings could be considered the major sector for investment in the real-estate market. According to the Association for Real Estate Securitization, the office-building sector accounted for 41.0% of all properties owned by J-REITs, Japan’s real estate investment trusts in Japan, as of May 31, 2020, far greater than the second-place share of commercial facilities (at 17.4%) followed by logistical facilities at 16.7% and residential housing at 14.2%. This shows the enormous impact that the office market has on the direction of the overall real-estate market.

Many are concerned that the current pandemic could create a situation similar to the one that followed the 2008 global financial crisis, but there is a major difference with regard to the influence on office demand. That earlier crisis began in the financial sector, in which the bulk of employees work in offices, and then spread out to a wide range of industries. In contrast, the brunt of the impact from the current crisis has fallen on service industries like restaurants and travel-related firms, retailers, and transport companies, which have a lower percentage of office workers. Thus, the direct impact on the office market seems relatively low.

Impact of Telework and Social Distancing

Considering such factors, when we contemplate the future for the office market, we need to divide the impact into short-term changes over the course of the next year or so and medium- to long-term changes that take into consideration the post-COVID-19 reality.

In the short-term, we can anticipate a negative effect on office demand due to the spread of telework and working at home, which results in fewer workers commuting to offices. At the same time, the need to secure adequate space for social distancing could be a plus factor for office demand, since organizations will need more floor space per person.

Ultimately, it seems that those two factors would cancel each other out, so that in the short term there would not be much change. Granted, the decrease in the number of employed will make a decline in demand for office space inevitable, but it seems unlikely that the introduction of work-from-home options would lead to plummeting office demand.

This coincides with the latest trends in the leasing of office buildings. There is a noticeable trend at present to temporarily freeze or cancel deals that were under consideration or negotiation. But only a few of the contracts already entered for office rentals have been terminated.

With every company prioritizing the current response to the COVID-19 crisis, they are taking a cautious attitude toward longer-term strategies for office space, with an eye to possible changes in the internal and external situations they face.

A trend can be seen among some IT companies and venture capital firms to cancel office lease contracts as a result of introducing full-scale telework systems, not surprisingly. However, most of these firms rent offices with relatively small floor spaces, so that this is not likely to have a great impact on the office market as a whole. The market for rental office space is likely to slow down over the next few months to a year as it will be difficult for firms to take decisive office-related actions, such as entering or cancelling new contracts.

Vacancy Rate to Level Off Around 4%

The Commercial Property Research Institute published a graph in the first quarter of 2020 forecasting vacancy rates and rents over the next three years for office buildings in central Tokyo’s prime business districts. 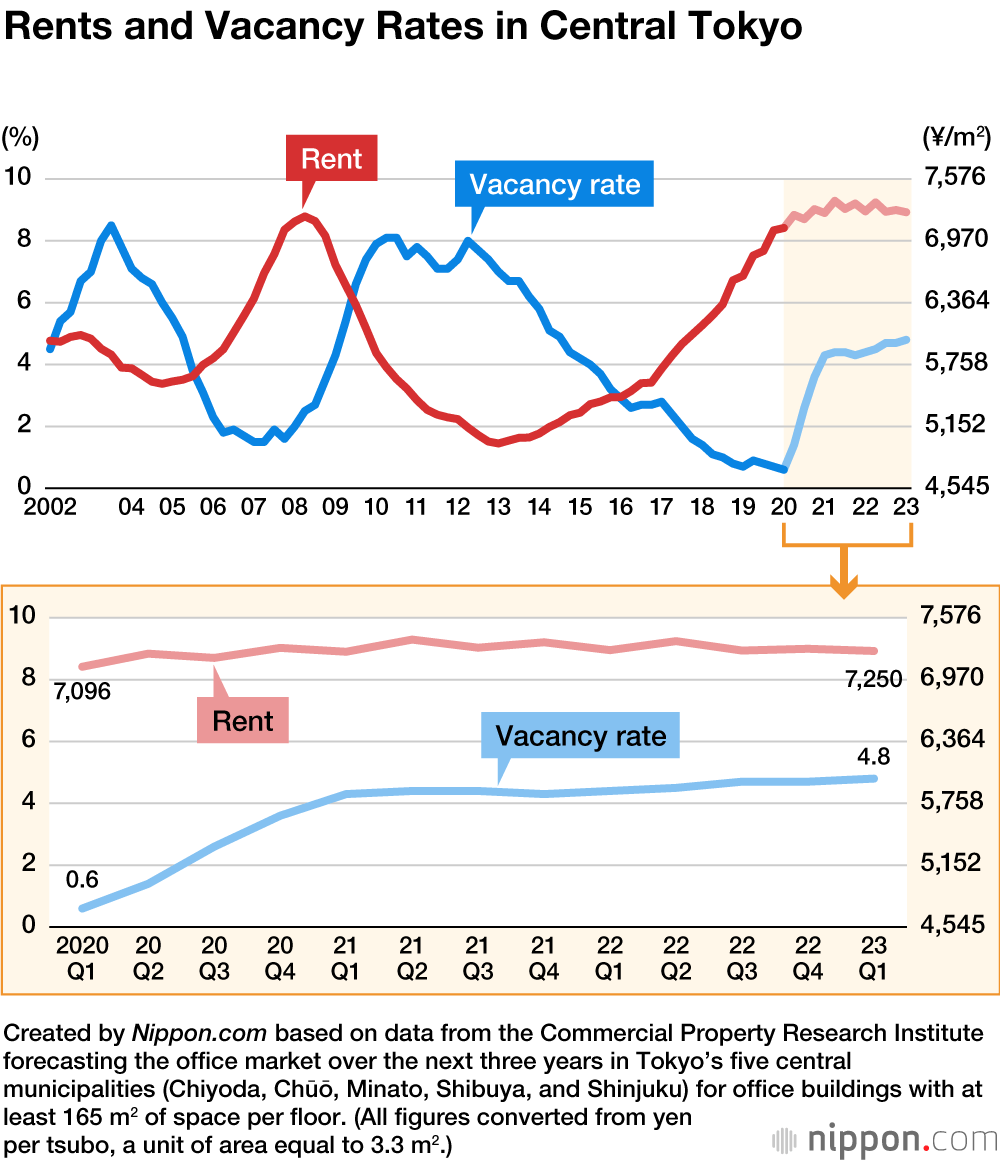 A forecast issued by the NLI Research Institute on May 19 stated that real GDP growth would fall significantly for the period from April to June 2020 but that economic growth would be on the plus side during the July–September period. As a result, it is expected that the rise in the vacancy rate will be stemmed next year, with modest movement in the 4% range continuing from the first quarter of 2021. Although the vacancy rate is expected to rise significantly, since it will probably not exceed 5%, the impact on rent levels over the next three years is expected to be limited. For the time being, rents are expected to hover at around ¥7,273/m2.

If the prediction of a vacancy rate of around 4% holds true, the impact on the market will be more limited than the situation after the 2008 financial crisis, when the rate shot up to around 8%. The expectation is that the economy will contract in the latter half of 2020 as a result of the COVID-19 crisis, with a recovery in office demand anticipated to begin from around the second quarter of 2021.

A look at the provision of new office space, which alters the balance between supply and demand, shows that the annual level is expected to remain below 330,000 m2 in 2021 and 2022, as compared to the high level of 759,000 m2 in 2020. Then, in 2023, new supply is expected to surge again, exceeding the 990,000 m2 level for the first time since 2003. As shown in the figure above, the balance between supply and demand will be stable from next year, but the huge influx of new supply in the first quarter of 2023 is expected to raise the vacancy rate still more, raising the possibility for a significant downturn in rent levels.

A Shift to a “Hybrid” Working Style

In the post-pandemic world, it seems likely that telework and work-at-home options will become widely established. The important thing to note is that these will be options, so that the degree of implementation will depend on each particular company. Factors that will influence the choices made by companies will include the nature of their respective industries, the level of IT literacy within them, and what could broadly be termed their “corporate cultures.” At one extreme are IT firms and the like that will take the lead in shifting to a 100% at-home approach, while in other cases companies will return to office-centered work. However, it seems likely that in most cases companies will introduce an appropriate level of telework while seeking what could be called a “hybrid” style of working.

Playing a large role in all of this will be the memories that employees themselves retain of the experience of performing work without commuting to the office.

This has given many a chance to rethink the significance of the daily commute on crowded trains, time spent in transit to visit clients, and business trips.

Of course, at the same time, communication through face-to-face meetings remains as important as ever. I think that many employees have also experienced the inconvenience and limitations of video conferencing, which has become indispensable lately. However, with information and communication technologies continually progressing, and people becoming more accustomed to these solutions, there will certainly be improvements to overcome some of the inconveniences experienced today.

Over the medium to long term it seems likely that the role of offices will be redefined as each company is forced to rethink what functions it requires in its own office spaces. The future shape of the office is not yet clear, but what seems certain is that a change is coming that could be termed the demand for post-COVID-19 office spaces.