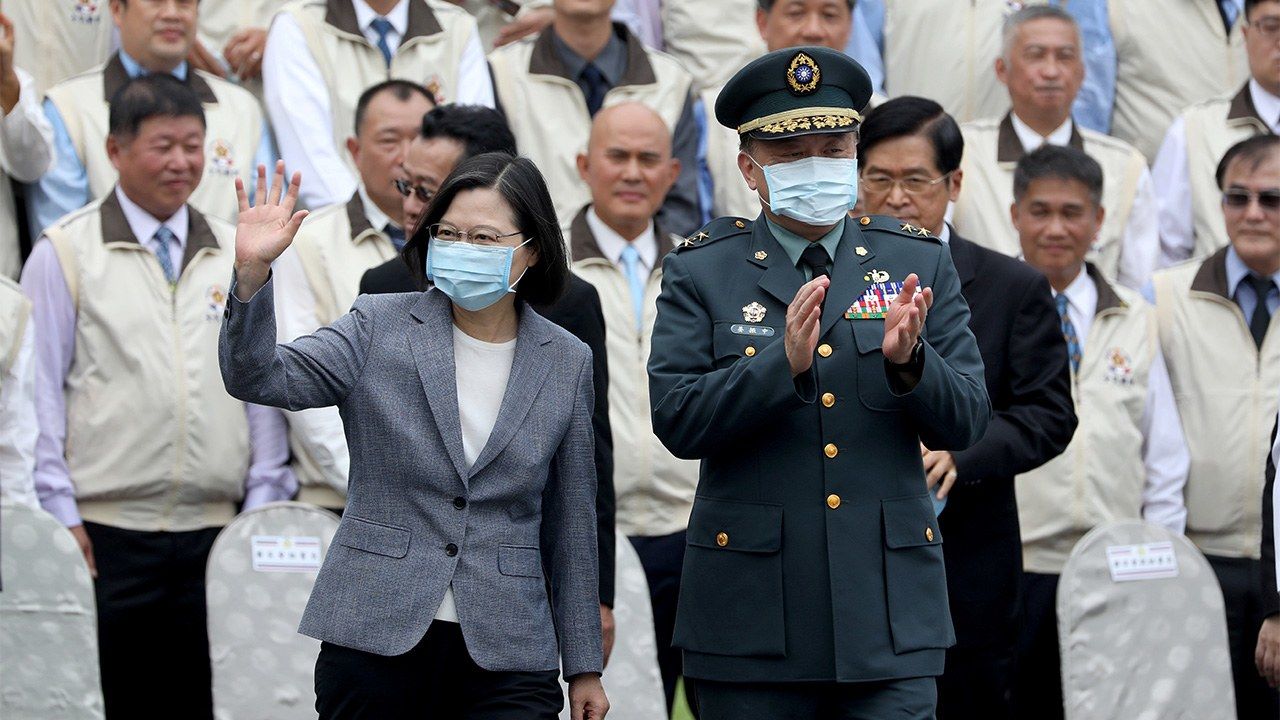 The Importance of Taiwan’s WHO Participation

Politics Sep 10, 2020
Taiwan successfully managed to control the spread of COVID-19, yet its exclusion from the World Health Organization reveals the increasing strain in the US-China and Taiwan-China relations, instead of greater cooperation.

Taiwan-China Antagonism Lies at the Core

The World Health Assembly, the annual governing forum of the World Health Organization, convened in May 2020, against the backdrop of the global spread of COVID-19. This year, there was much controversy surrounding the issue of Taiwan’s participation as an observer.

Taiwan attracted world attention for successfully containing the infection, yet it is excluded from the WHO. Many countries have expressed their support for Taiwan’s participation in the body, including Japan and major Western nations, but China has strongly resisted, insisting on the “One China” principle that claims Taiwan as a part of China. As a result, plans for Taiwan’s participation as an observer were shelved. Taiwan’s president, Tsai Ing-wen, criticized the renewed veto of her country’s participation resulting from pressure on the WHO. Discussion on the matter has been postponed until the next WHA session, scheduled to resume in the second half of 2020.

This outcome shows the impact that tension between countries and the global power balance have upon the handling of the worldwide spread of infectious disease. The intensification of US-China tension concerning Taiwan’s WHO participation is an example. But at the core lies the antagonism between Taiwan and China. It is China’s influence that has kept Taiwan from taking part. The conciliatory approach adopted by Taiwan during the Ma Ying-jeou administration, from 2009 to 2016, enabled the island to take part in the WHA as an observer, under the name “Chinese Taipei.” But the Democratic Progressive Party, whose leader, Tsai inaugurated her new administration in 2016, distanced itself from mainland China, and Taiwan was again been excluded from the WHO in 2017 and afterward.

The antagonism between Taipei and Beijing has been accentuated in the response to COVID-19. The issue of Taiwan’s WHO participation highlights the growing lack of trust between it and China.

The China Crisis: Impatience and Annoyance at Taiwan

Most recently, China did approve participation at a WHO forum by Taiwanese experts, based on their individual credentials. But it was adamant in opposing Taiwan’s WHA attendance making strenuous diplomatic efforts to prevent it. At the core lies China’s sense of crisis at any undermining of its “One China” principle. It wants to emphasize this as the only acceptable option for the international community. For China, conspicuously defiant of the norms of the global order, it must protect the One China principle as a foundation of its influence.

In addition, it is impatient and annoyed at Taiwan’s efforts to enhance its global presence, due to the potential this has to undermine the One China principle. The inconvenient truth is that Taiwan’s success repudiates China’s insistence on the superiority of its political system. In late January 2020, President Xi Jinping spoke with WHO Director-General Tedros Adhanom Ghebreyesus during his visit to China. Xi emphasized that China had amply demonstrated the preeminence of “socialism with Chinese characteristics” in its policies to prevent the spread of the virus; Tedros, for his part, also praised the advantages of China’s system.

Meanwhile, Taiwan was also successful in countering the pandemic, under its democratic system. It did not introduce city lockdowns, but was able to control the spread of the virus through dedicated information disclosure. This is the reason for the commendation and support for Taiwan from Japan and key Western democracies. The existence of Taiwan, promoting democratic freedom, poses a significant threat to China.

The Growing Dogmatism of the Xi Regime

One cause of the deepening Taiwan-China antagonism is the Xi Jinping regime’s increasingly dogmatic approach to “One China.” Xi Jinping has stated that the “1992 consensus,” seen as the foundation of interaction betwqeen the two sides, is an embodiment of the One China principle.

As for the so-called 1992 consensus, while China claims that this consensus was an agreement confirming the existence of One China, the KMT, or Kuomintang, which led Taiwan at the time, insisted that the agreement allowed both sides to express their own interpretation of One China. Under Hu Jintao, Beijing recognized the value in this ambiguity, emphasizing the shared belief and avoiding definitive confrontation over the fundamental difference of interest, thereby successfully achieving improved relations with Taiwan’s Ma Ying-jeou administration.

Hu’s government adopted a flexible approach, considering the will of the Taiwanese people. It avoided explicitly raising the One China principle with Taiwan, conceding to Taiwanese interests and thereby winning favor with the Taiwanese public, in an effort to create advantageous circumstances for future reunification. Taiwan’s achievement of observer status at the WHA was due to China’s respect for Taiwan’s wish for international participation. For Taiwan, even attending as a “part of China” was perceived by its people as a breakthrough in Taiwanese diplomacy.

The flexibility that existed under the Hu administration has dissipated under the Xi regime, whose increasing emphasis on doctrinal correctness has brought about an increasing rigid stance toward Taiwan. Interactions have come to a halt with the Tsai Ing-wen administration, which does not accept the 1992 consensus, and China is applying more pressure. It has repeatedly engaged in military intimidation and has taken diplomatic steps to reduce Taiwan’s capacity for international relations. The exclusion of Taiwan from the WHO is the most conspicuous example. 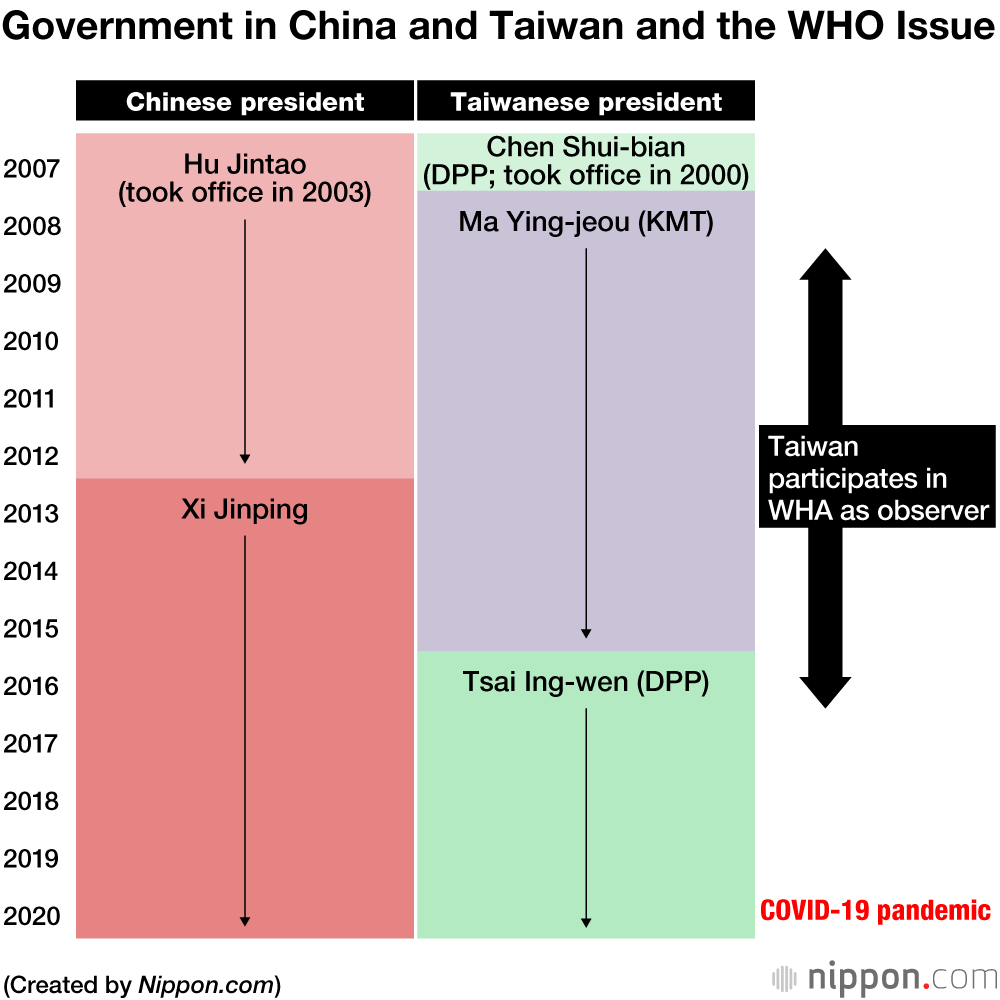 In contrast, the Tsai government has adopted an approach to China that seeks to maintain the status quo. Although it does not accept the 1992 consensus in regard to One China, nor does it pursue Taiwanese independence, so as to avoid provoking Beijing. But the Xi regime has a deep-rooted distrust of the Tsai administration due to its rejection of the One China principle, viewing Taiwan’s stance as provocative behavior. Regarding Taiwan’s request to take part in the WHO and its donation and export of face masks to various countries, China asserts that Taiwan is using its pandemic response to further its aims for independence, and has repeatedly criticized its actions.

Meanwhile, as another factor aggravating antagonism between the two sides, distrust of China grows ever stronger among the Taiwanese public. Xi is unable to effectively respond to the sentiment of the Taiwanese public. In fact, his approach to reunification is unacceptable to Taiwan. In his 2019 New Year’s speech, Xi declared that he would not rule out the potential use of force against the island, while also calling for it to engage in discussions toward exploring a  “one country, two systems” solution to the Taiwan question. Shortly after this, tensions flared up in Hong Kong when its government proposed a bill regarding extradition of local residents to the mainland as an amendment to the Fugitive Offenders Ordinance. The wretched state of affairs in Hong Kong, under just such a “one country, two systems” policy, raised uncertainties for the Taiwanese public about their own future, and intensified their distrust and wariness toward China. The Taiwanese populace clearly expressed its will in January 2020 in Taiwan’s presidential election, giving Tsai an overwhelming victory on her platform of protecting Taiwanese sovereignty and democracy.

The spread of COVID-19 began amid the lingering reverberations of this election result. Even with the spreading pandemic, China did not ease the pressure upon Taiwan, maintaining its hardline stance on the One China principle even in its response to the virus. Immediately following the lockdown of Wuhan, when Taiwan tried to dispatch a charter flight to evacuate its citizens from the city, China insisted upon the use of a China Eastern Airlines plane. This was to avoid creating the impression of the Wuhan-Taipei flight as an international service. Even thereafter, Beijing maintained its irrationally uncooperative stance towards Taiwan, further damaging the sentiment of the Taiwanese people toward the mainland.

Taiwan already harbored a strong distrust of China, viewing it as a source of risk, following the bitter experience of the 2003 SARS epidemic. It is thought that the ravages of SARS in Taiwan were exacerbated by China’s delay in providing information, and there were suspicions that the mainland government concealed the facts. This was one reason behind Taiwan’s rapid response to the new coronavirus.

Unfortunately, the two countries have not found an opportunity to ease tensions in responding to the pandemic. The lack of trust accompanying the deepening antagonism between Taiwan and China has amplified their mutual suspicion, and the current state of relations between the two is weighing heavily upon the issue of Taiwan’s WHO participation.

Taiwan’s adroit handling of the pandemic has attracted global attention. It further highlights the absurdity of the current state of affairs, namely Taiwan’s exclusion from the WHO. The aspiration of the Taiwanese public toward WHO membership can no longer fit in a framework of participation as a “part of China.” At the same time, though, it is difficult to see China relaxing its tough approach toward the island. The United States, in confrontation with China over whether Taiwan should be permitted to join the WHO, formally notified the United Nations of its intention to withdraw from the health body, having criticized it for favoring China. These complex issues cast a shadow over the prospect of international cooperation in the pandemic response.

The spread of COVID-19 has shown the global community the enormity of the impact that the spread of infection has on the economy, industry, security, and many other spheres. We cannot afford to leave a geographical blank in the response to such a global pandemic—the international community needs to unite in order to implement globally based initiatives. Taiwan is equipped with experience and expertise from its successful containment of the infection; there is no justification for denying its WHO participation. Taiwan’s experience, information, and expertise are of enormous value to the entire world.

Under the current WHO framework , which only allows affiliation by sovereign nations, Taiwan’s participation in the WHA as an observer is the most realistic way for it to share its experience and knowledge. Japan should cooperate with Western countries in continued support of Taiwan’s observer status in the WHA, and must exert its influence to impress the necessity of this upon the member states who decide the matter. Furthermore, to reform the WHO and enhance its readiness to respond to future pandemics, there should be active debate on a new, systematic framework that includes Taiwan from a longer-term perspective.