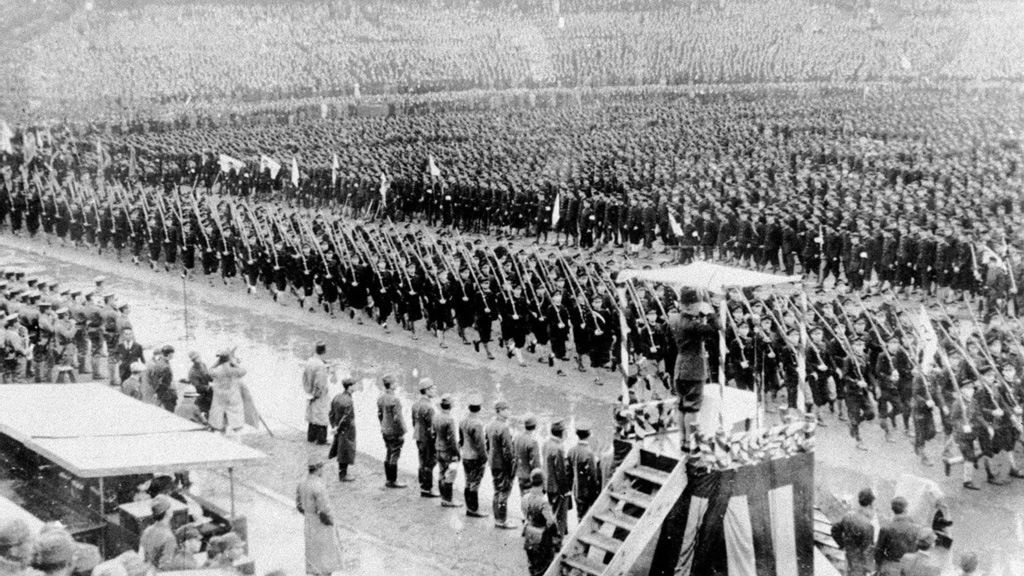 Reflections on War and Sports: Olympic Games in Troubled Times

Tokyo 2020 Sports Politics Society Aug 15, 2020
This summer, the entire world should have been caught up in the excitement of the Tokyo Olympics and Paralympics. However, the COVID-19 pandemic has postponed them by a year, and there is no guarantee that they will take place in 2021. In 1940, Tokyo forfeited holding the Games due to the expansion of the war. A look back at a time when, like now, the Olympics faced an impossible situation.

The World War I, The Great Kantō Earthquake, Global Panic

The invitation for Tokyo to host the 1940 Olympic Games originally arose from a desire to show the world that the country had recovered from the Great Kantō Earthquake.  The Olympic Games were planned around the seventeenth anniversary of the earthquake, as well as the commemoration of 2,600 years since Emperor Jinmu’s mythical ascent to the Chrysanthemum Throne.

However, what had been meant to be a celebration by the whole world ended up illusory. The various historical developments that combined to lead to the forfeiture are replete with undertones that seem to echo our situation today.

The world suffered great instability from the 1910s through the 1930s. World War I started in 1914, and toward the end of that conflict, an influenza virus known as the “Spanish Flu” spread from the United States to Europe and the rest of the world, due in large part to global troop movements, leading to many deaths in Japan as well. It remained active for almost three years, starting in 1918.

The Great Kantō Earthquake hit Japan on September 1, 1923. The quake devastated Japan’s core and left the Kantō region, with its many wooden structures, totally ruined. Japan’s economy suffered a major blow, and with the disruption of the capital’s functions, the country was plunged into an economic downturn that became known as the “earthquake panic.”

At the same time, the global economy in the 1920s was working toward a recovery based on reconstruction demand following the World War I. Overinvestment led to inflation, though, and the bubble finally burst. On Black Thursday, October 24, 1929, the New York Stock Exchange crashed, touching off the global financial panic of the Great Depression.

Against this background, Nagata Hidejirō, who was very keen to host the Olympics, became mayor of Tokyo in 1930. (Tokyo would be a city, rather than a metropolis, until 1943.) Originally a government official, he had been mayor of Tokyo at the time of the Great Kantō Earthquake. He resigned a year after the earthquake following a personnel issue relating to city officials, but he regained his position as mayor and sought opportunities to show the world that Tokyo had risen again from the ruins. His idea was to hold a “Reconstruction Olympics.”

The Olympics that Never Happened

The world, however, was entering a period of increasing divisions. Following the financial panic, the main players leaned toward economic blocs, attempting to protect their own economies through trade protectionism. As international cooperation fell by the wayside Germany, which had lost the war, saw the rise of the strongly nationalistic Nazi party. Japan, too, sought to expand its economic sphere by invading China.

The Olympics were awarded to Japan at a general meeting of the International Olympic Committee held in Berlin on the occasion of the 1936 games. But with the start of the second Sino-Japanese war in 1937, the country, bent on military expansion, had little time for the Games. The decision to forfeit was made in July 1938. With only two years left to prepare, the Japanese government made the decision to cancel the event, going over the heads of the city of Tokyo and the Olympic Committee.

Looking at the current situation, the expression that “history repeats itself” comes to mind. There is no actual war, but in recent decades we have seen the bursting of Japan’s bubble economy, the global financial crisis of 2008, the Great East Japan Earthquake of 2011, the rise of nationalistic leaders such as US President Donald Trump, and the global rise in new coronavirus infections. In the wake of all this, the question is whether the Tokyo Olympics can be held or not.

What Sugimoto Sonoko’s “Prayer for Tomorrow” Tells Us

After its defeat in World War II, Japan was eventually able to host the 1964 Olympic Games. There is a well-known text by the novelist Sugimoto Sonoko on seeing the opening ceremony at the national stadium on October 10, 1964: the essay Asu e no kinen (Prayer for Tomorrow), first published by Kyōdō News and included in the Kōdansha publication Tōkyō Orinpikku: Bungakusha no mita seiki no saiten (The Tokyo Olympics: A Global Festival as Seen by Writers).

“Twenty years ago, I was standing in this very same stadium. I was a student. I was bidding farewell to the students, standing in the autumn rain, about to depart for the front. . . . Near the royal box where the Emperor and Empress were seated stood Prime Minister of Japan Tōjō Hideki, exhorting the students to wipe out the American and British enemies. . . . I could not have imagined that, twenty years later, I would watch young people from 94 countries gathered together in this same stadium.”

Meiji Jingū Gaien Stadium, which was the site of the farewell ceremony for the recruits heading to war, was torn down after the conflict ended. It was on that site that the National Stadium that would be the main site of the 1964 Olympics was built. It was rebuilt once again ahead of the 2020 Olympics, but the new facility has not been properly used yet following the postponement, aside from on July 23, when the swimmer Ikee Rikako broadcast a message as part of an event one year before the postponed games.

This is how Sugimoto described seeing both the painful sight of students being sent off to war and the spectacular Olympic opening ceremony in 1964.

“There is a connection between today’s Olympics and that day, and that day is also connected to today. This makes me fearful. Nobody can even begin to imagine how today, with its good fortune and its colorful and bright displays, will tie in to our tomorrows. The only thing that we can do is pray that today and today’s beauty must be a part of our tomorrows.”

“Images of Peace” at the 1964 Opening Ceremony

Katakura Michio, the NHK director who was in charge of filming the closing ceremony for the 1964 games, had a hard time deciding what kind of images would be best for the finale of the first Olympics to be held in Japan.

He went for advice to Ōshima Kenkichi, who had been his senior at Kansai University and was the head of Japan’s delegation to the games that year. Before the war, he had won a bronze medal in the triple jump at the 1932 Olympics in Los Angeles. Subsequently, he became the Mainichi Shimbun correspondent in Berlin and a sportswriter. He introduced to the Japanese the ideology of Pierre de Coubertin, founder of the modern Olympics, and was known as the “leaping philosopher.”

When Ōshima asked him how he envisioned the broadcasting of the Olympics, Katakura responded by emphasizing: “The Olympics are a festival of friendship and peace. They are not just an international athletic competition.” Ōshima nodded in agreement. But Katakura remained uneasy. Even if he could film images of friendship, he didn’t know what would represent images of peace. 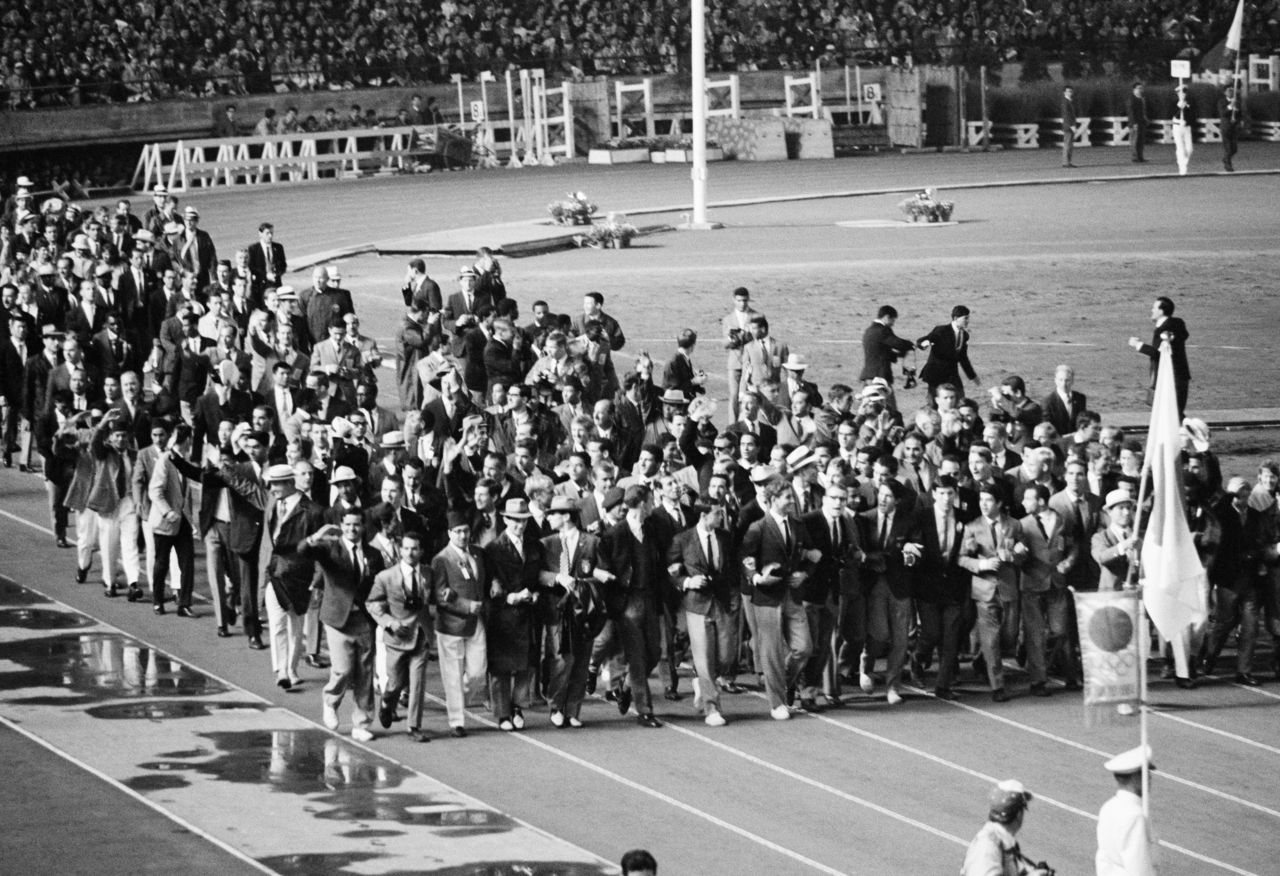 At the closing ceremony for the 1964 games, members of many national teams came together to parade arm in arm before the crowds. (© Jiji)

Getting ready for the big day, Katakura produced a number of storyboards and made painstaking preparations. The ceremony started with the entrance of the flag-bearers from all the national teams. But just after that, an unexpected scene unfolded before him. Irrespective of country, the athletes started to mix together, and swimmer Fukui Makoto, who had been Japan’s flag-bearer, was lifted up onto the shoulders of foreign athletes. This was an unexpected scenario.

After the Games ended, Ōshima apparently said to Katakura, “That’s the kind of thing that makes people say that the Olympics are necessary for world peace.” He managed to film the “images of peace” that he had wanted in an unexpected way.

Only 19 years had passed since the conclusion of World War II. It was natural that people the world over—not just in Japan, which had achieved its rebirth from the ashes of that war—should celebrate the joy of peace.

Time to Reflect on the Basics

More than half a century has gone by since then, and the scale of the Olympics has grown ever larger. Bound by outsized contracts for broadcasting rights and sponsorship, it is not even possible to change the timing to avoid intense heat. Organizing countries make their preparations under political guidance, and the colossal budgets seem to be a way for countries to show their power.

In the difficult circumstances of the COVID-19 pandemic, the hard reality is that public opinion regarding the Olympic Games is leaning more toward “they should be canceled” and “it will be impossible to hold them next year, too” and away from the desire to hold them. It is unusual for the tide to turn to such a degree.

These Tokyo Olympics were originally cast as a way for Japan to display its recovery from the 2011 Great East Japan Earthquake, but are now being called the “Victory Over the Coronavirus Games.” When Tokyo earlier set out to win the 2016 hosting rights, its unsuccessful application positioned them as the “Environment Olympics.” Could it be that this ever-shifting conceptualization shows a lack of understanding of the true nature of the Olympic Games?

Looking at recent Olympic host cities (including planned ones), points in common with Tokyo can be seen. London in 2012, Paris in 2024, Los Angeles in 2028. These all have experience in hosting the Games, but the significance of their repeat hosting is dubious. The trend in recent years has been for leading cities in advanced economies to pursue the games as a means of carrying out programs of urban renewal.

Evidence of this can be seen in the way that Tokyo’s perfectly serviceable National Stadium was torn down to build a completely new one, while simultaneous redevelopment took place in the Aoyama area. The Tokyo Bay Zone has also been developed, with the new look meant to welcome foreign tourists, but things have not advanced as per the blueprint.

It is because things are as they are right now that this is the time to reflect on the value and role of the Olympic Games.

Reacting to the age of globalization, countries around the world are looking to protect their own interests through greater segmentation. The standoff between the United States and China, Brexit, the strained relations in East Asia between Japan and its neighboring countries. And COVID-19 has exacerbated this state of affairs, with the very fabric of society becoming segmented.

Just like Sugimoto wrote, history is linked. The delight in peace that brought people around the world together is connected to today and will be inherited by future generations. It is that enthusiasm that must not be broken. 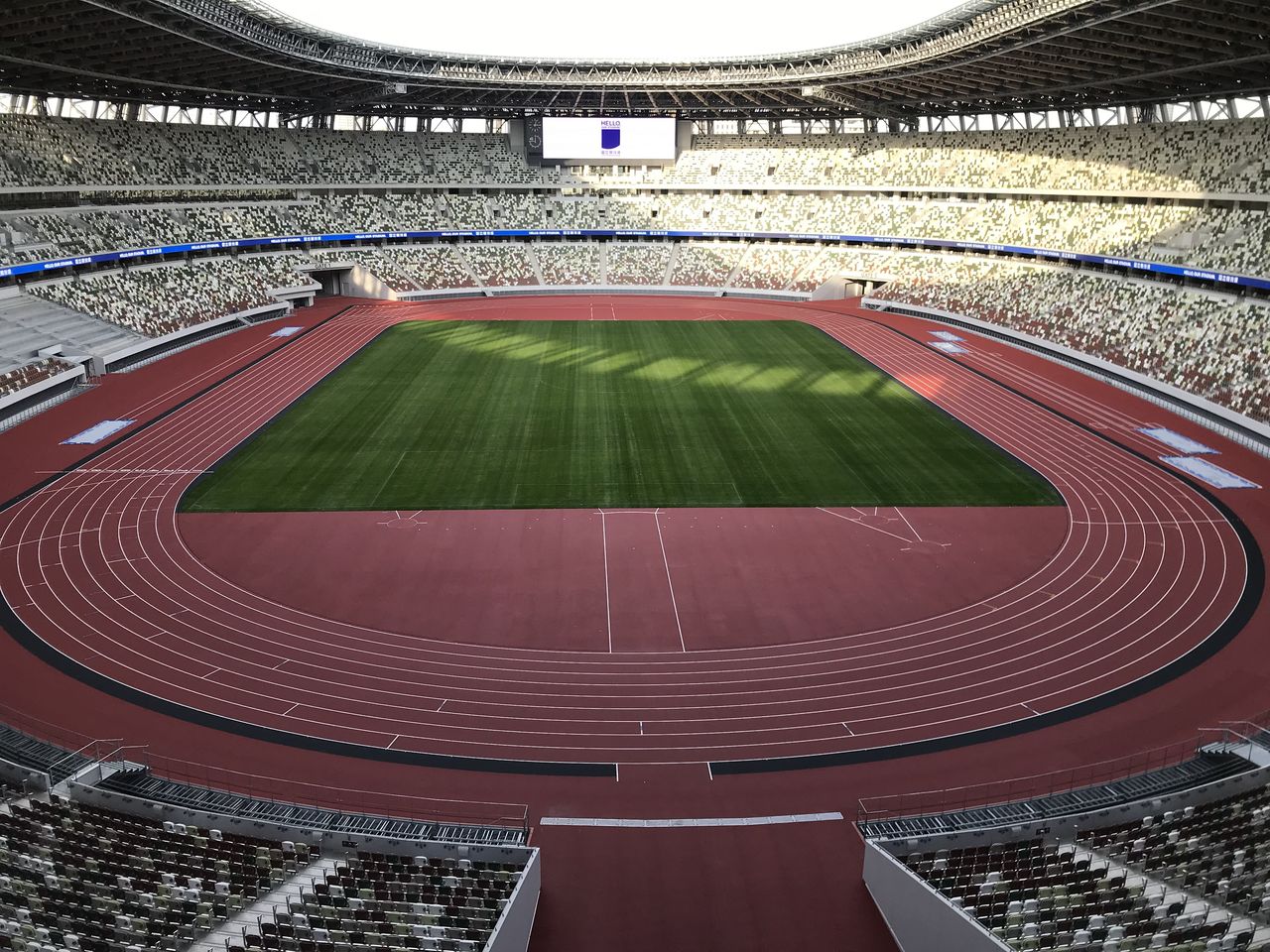