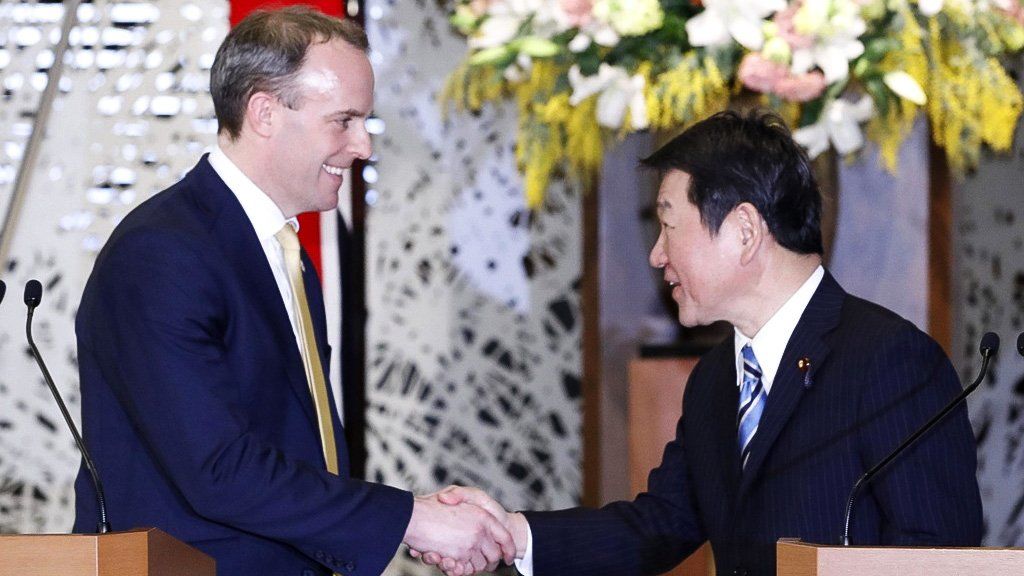 The New Anglo-Japanese Alliance and the “Six Eyes”

Politics World Oct 29, 2020
With its withdrawal from the EU and its concerns over China’s regional hegemony, Britain is picking up the pace of its rapprochement with Japan. A new trade agreement is likely to be reached in the course of 2020, and there are plans for the British Navy to be part of a joint deployment with US and Japanese forces in the Indo-Pacific in 2021. With a tight bilateral relationship not seen since the 1902–23 Anglo-Japanese Alliance, a Six Eyes alliance seems closer than ever.

An Official Invitation from Britain to Japan

“This is off the record, but we have already issued an invitation to Japan to become the sixth member. Once Japan makes a decision, we will move forward officially.”

That is the comment I got in late June 2020 when I called the contacts I had made at British intelligence (the Secret Intelligence Service, commonly known as MI6) when I was London bureau chief for Sankei Shimbun until April 2019. This came after China had been ground zero for the new coronavirus infection spreading across the globe, and riots were taking place in connection with the passage of the Hong Kong national security law.

An invitation had been issued for Japan to join the Five Eyes intelligence alliance comprising the United States, Britain, Canada, Australia, and New Zealand. During the almost four years I spent in London starting in 2015, I met up with my MI6 contact once every few months, and we discussed Five Eyes a great deal. But while I was in London, it was pretty much limited to flattery along the lines that Japan could join if the conditions were right, so I was at a loss for words when I heard that things had moved as far as sending an invitation to become an official member.

A month after that telephone call, during a July 21 online study meeting of the Conservative Party’s China Research Group, Tom Tugendhat—chairman of the Foreign Affairs Committee of the House of Commons—welcomed the idea proposed by Japanese Minister of Defense Kōno Tarō of creating Six Eyes:

“Five Eyes has been the core of our intelligence and defense architecture for decades. We should look at partners we can trust to deepen our alliances. Japan is an important strategic partner for many reasons and we should be looking at every opportunity to cooperate more closely.”

Tugendhat formed the China Research Group in April this year to review British China policy, modeling it after the European Research Group formed by the Conservative Party’s hardline Brexiters who succeeded in taking Britain out of the European Union. The CRG was behind the British government’s ban on Huawei technology in the country’s 5G telecommunication networks. These hardliners on European issues are also willing to take a tough stance on China, and it seems safe to view Tugendhat’s welcoming position on bringing Japan into the Five Eyes fold as representative of Tory thinking on the matter.

Former Prime Minister Tony Blair of the opposition Labour Party has also voiced strong concerns about increased authoritarianism in communist China over the past few years. In an interview with the Sankei Shimbun published on August 4, he stated that it was necessary for democracies to cooperate in standing up to the threat posed by China, and that Japan’s entry into the Five Eyes needed to be studied.

The UK media has also covered this possibility. The right-leaning Daily Telegraph reported in its July 29 issue that the inclusion of Japan in the Five Eyes was being considered in order to safeguard important communication and energy infrastructure as countries shake free from dependence on China. On the same day, the liberal Guardian newspaper reported that there was a likelihood that Japan would become the sixth member of the Five Eyes as part of an anti-China standpoint. In a Britain where divisions are still strong between remainers and leavers even after Brexit has been decided, the topic of Six Eyes has become one of rare national consensus, with the idea of including Japan gaining nonpartisan political and media support.

Having voted to leave the EU in a referendum held in June 2016, Britain has tapped the fast-growing Asia-Pacific region as an arena for its renewed participation as part of its Global Britain vision, designating Japan as its most important partner in Asia. The rapid warming of Anglo-Japanese relations lies behind Japan, once a defeated wartime opponent, being invited to join the Anglo-Saxon alliance of English-speaking countries that were victorious in that conflict.

On the economic front, Tokyo and London reached broad agreement on October 11 on a trade partnership, their first since Brexit was announced. They are aiming to sign this agreement within the year so it can go into force on New Year’s Day, 2021. In the area of security, meanwhile, they are forging a close relationship comparable to the Anglo-Japanese Alliance in place during the early decades of the twentieth century, such as by planning joint exercises early next year involving Britain’s new aircraft carrier, the Queen Elizabeth, the US Navy, and Japan’s Maritime Self-Defense Force. There will also be comprehensive collaboration in areas including cyber-security and infection control measures, making it a new configuration of the alliance. Indeed, British Prime Minister Boris Johnson greeted news of Prime Minister Abe Shinzō’s resignation with praise for his strengthening of Anglo-Japanese relations in the fields of trade, defense, and culture.

The origin of the Five Eyes goes back to February 1941, 10 months before the attack on Pearl Harbor, when an American intelligence officer visited Bletchley Park (the British government code and cipher school) and embarked on a cooperative relationship to break codes. The partners worked together to break the Enigma code used by Nazi Germany, as well as all the codes used by Japan’s diplomats and imperial military forces, and shared detailed information with the dominions of Canada, Australia, and New Zealand, which made up the core of the British Empire. In July 1945, one month before the Soviet Union joined in the war against Japan, the secret agreement reached at Yalta by the United States, Britain, and the Soviet Union on the latter’s entry into the war against Japan was also shared with the British dominions. 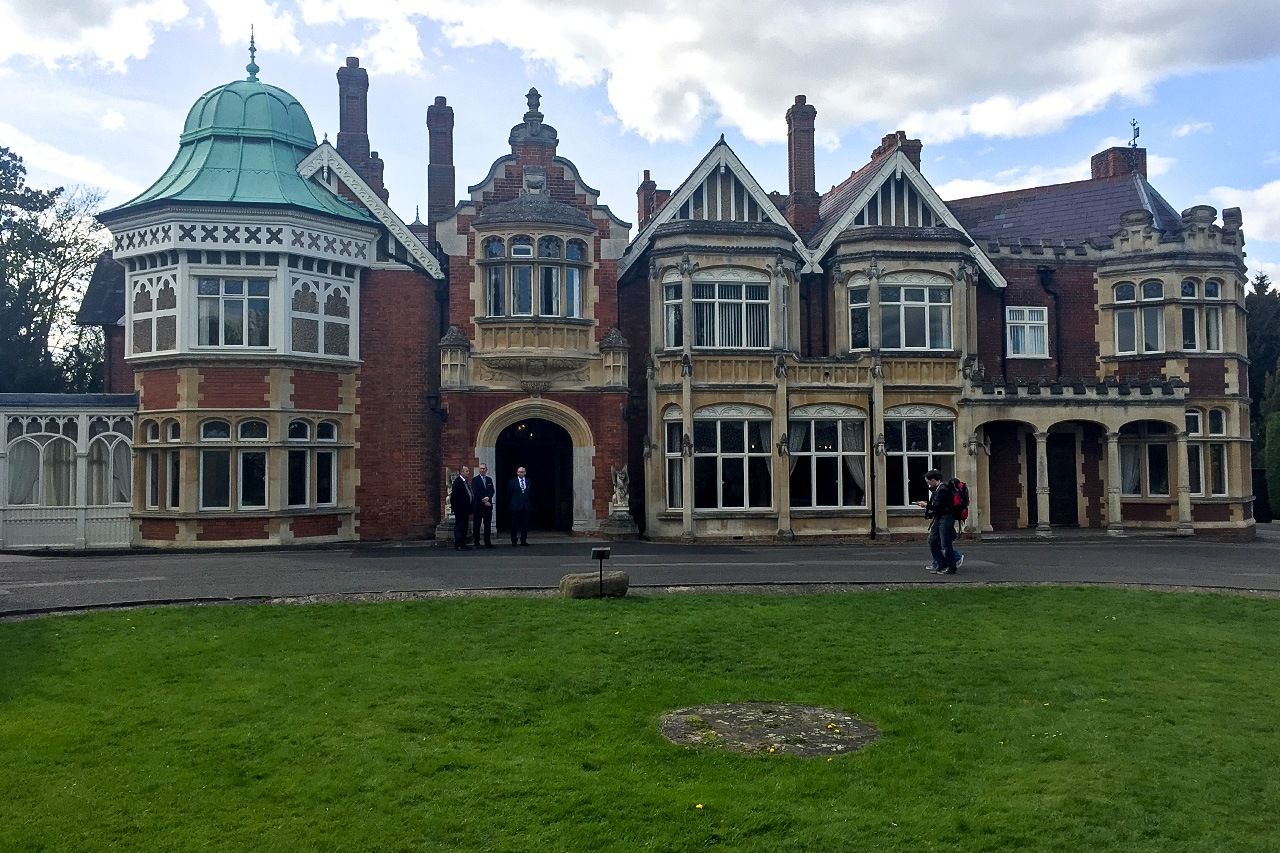 Bletchley Park, where Five Eyes originated. (Photo by the author) 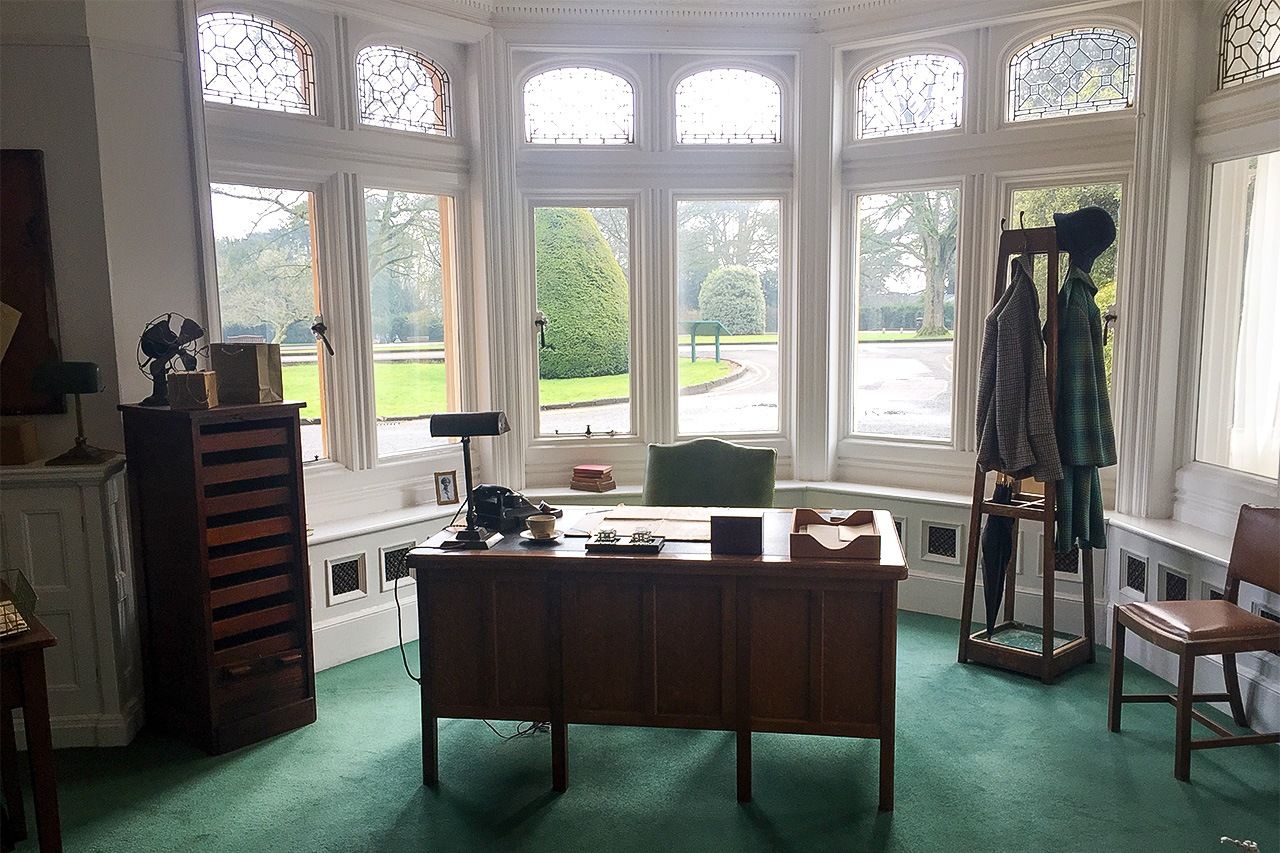 A room at Bletchley Park, where the visiting American intelligence officer forged the special relationship and started cooperation on code-breaking. (Photo by the author)

After the war, the five countries signed the UKUSA Agreement to protect, analyze, and share terrorist and military intelligence obtained through their worldwide intelligence-gathering networks, including the Echelon network launched at the height of the Cold War. Following the end of that cold conflict, the focus shifted to monitoring of international terrorism and then, from about 2009, to China and Russia. Cooperation with Japan has progressed in recent years.

In early 2018 Japan, along with Germany and France, joined the circle sharing information on Chinese cyber attacks, carrying out mutual dispatches of liaison staffers and additional efforts to enhance the exchange of information. Japan is also participating in space defense, starting in October 2018 with the multilateral training exercise led by the US Air Force Space Command. In 2019, it joined France and South Korea in their anti–North Korea position, and joined the United States and Britain in exposing illegal ship-to-ship transfers by North Korean vessels.

Faced with the coronavirus and Hong Kong problems, the Five Eyes partners have stepped up their anti-Chinese stance, broadening it to cooperation in both economic and political matters, such as supplying each other with rare earth metals and pharmaceutical products and adopting common countermeasures with regard to the Hong Kong problem.

In connection with this, the idea that Japan should be included as the sixth member of the coalition to counter China has become mainstream in Britain. Australia also promotes Japan’s participation in Six Eyes, advocating the idea in tandem with its efforts to establish a new free trade zone involving the five regional members, along with Britain, in the Pacific. The United States also agrees to the inclusion of Japan, having stated in a 2019 congressional report that it considers Japan on an equal footing to the Five Eyes as a partner in intelligence gathering. The common thread in all of these developments has been the “Wolf Warrior” diplomatic stance adopted by an increasingly belligerent China, triggering growing acceptance for Japanese membership in an expanded Six Eyes network.

Having forged alliances with Britain prior to World War I, and with the United States after World War II, it is natural for Japan to participate alongside other maritime nations sharing the same values in terms of freedom and democracy. However, the fundamental rule is one of give and take in terms of the quality and volume of intelligence that is given and received, and it is therefore urgent to put in place an organization for dealing with foreign secret services, and facilities for the safekeeping of information, going beyond the boundaries of ministries and government offices.

However, Satō Masaru, former senior analyst at Japan’s Foreign Ministry, has noted that the National Security Secretariat could provide the five countries with condensed English translations of open-source intelligence information gathered and analyzed from Japanese-language newspapers and magazines, under the Act on the Protection of Specially Designated Secrets. Information intercepted by the Defense Ministry on military intelligence from North Korea, China, and Russia, as well as terrorism information relating to public safety, would also be useful to the Americans and British. Satō stated in the October 2020 issue of the magazine Voice that it would be much more cost-effective and realistic to take the approach of strengthening the existing intelligence community.

When interviewed by the Nikkei in August, then Defense Minister Kōno Tarō showed his motivation to take part, acknowledging that intelligence was already being shared with the five countries and indicating that Japan was exploring various forms of participation that did not go so far as full membership in the Eyes.

That said, there is absolutely no reason to turn down the invitation from members of this long-standing community of intelligence powers. We should immediately start our preparations to become part of this alliance, making clear our standing as a member of the camp of free nations. In this way Japan can continue to pursue the “proactive pacifism” approach it championed under Prime Minister Abe Shinzō as a way to contain an increasingly reckless China.