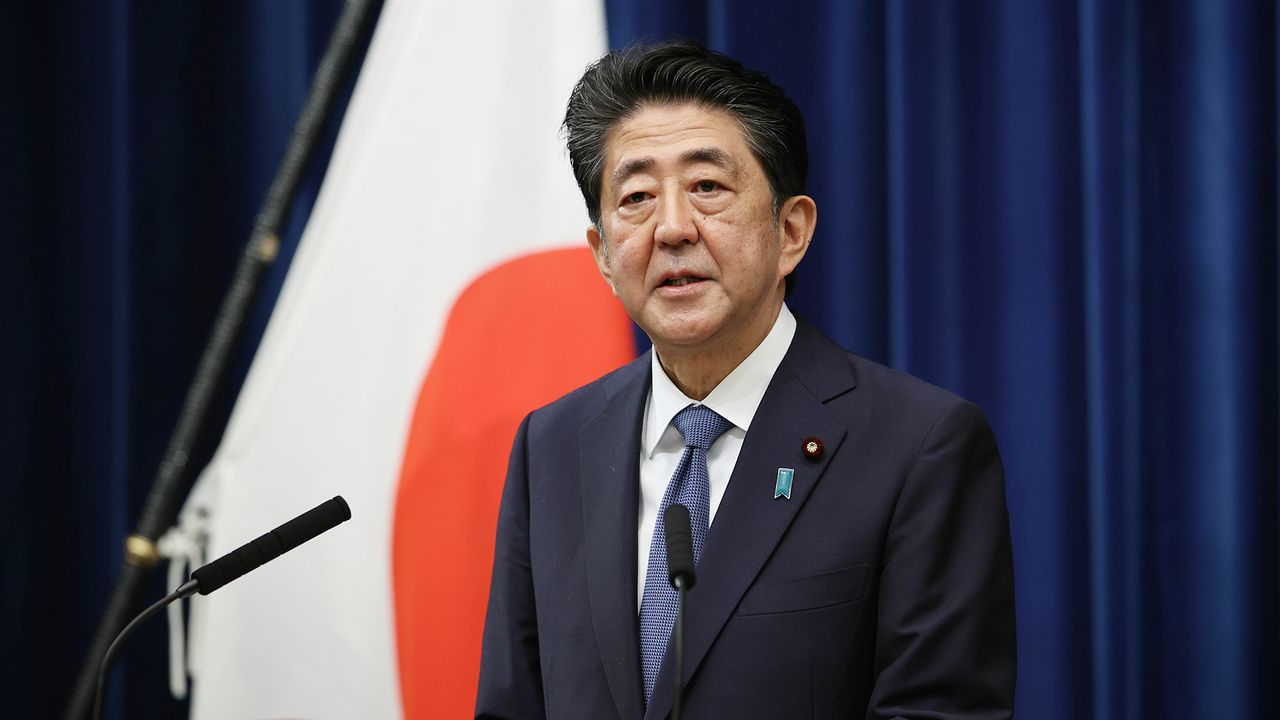 Politics Aug 31, 2020
Prime Minister Abe Shinzō’s administration lasted nearly eight years, from December 2012 until he announced suddenly in August 2020 that he would resign due to health problems. A look back at what Japan’s longest-ever premiership accomplished.

At a Friday evening press conference on August 28, 2020, Prime Minister Abe Shinzō announced that a recurrence of his ulcerative colitis would cause him to step down as soon as a successor was confirmed. Although his support ratings had been slipping in recent months due to his government’s response to the COVID-19 pandemic, he has long been viewed as an unassailable leader with no real competitors for Japan’s top political spot. Remaining in office for more than seven years since he retook it in December 2012, he surpassed Katsura Tarō (prime minister in 1901–6, 1908–11, 1912–13) in November last year as the leader with the longest cumulative time in office; on August 24 this year he beat Satō Eisaku (1964–72) as the premier with the longest continuous term, too.

Despite helming the nation atop its longest-lasting administration in modern political history, though, Abe is finishing his time in office in an entirely unsatisfying manner. Toward the beginning of this year, his cabinet showed considerable disorganization in its policy response to the first wave of COVID-19 infections in Japan, coming in for harsh criticism from the public. Today, though, the government frameworks to prevent a rapid spike in infections are in better shape than they were during the first wave, and we might have seen a rebound in Abe’s support ratings once the situation calmed down once again, making it a disappointing time for him to have to step down.

Given the severity of his health condition, though, stepping down was clearly his only choice. And as he noted at his press conference, now was the ideal time for him to do so in order to minimize the impact on Japan’s administration. His Liberal Democratic Party is scheduled to reshuffle its top officers next month, and there is still time before the next extraordinary session of the National Diet convenes.

Underpinning Abe Shinzō’s ability to remain in the Kantei for longer than any of his predecessors was a series of systemic reforms, beginning in the 1990s, that enhanced the authority of the prime minister. In considering the achievements of the Abe administration, we must first give thought to these reforms as a necessary condition for its creation.

First were the political reforms of 1994. These brought about a mixed electoral system, with both single-seat and proportional-representation districts, for House of Representatives elections. They also strengthened political funding regulations, introducing a system whereby political parties received public funds for campaign spending, reducing reliance on money politics focused on individual candidates. This new electoral system made it of primary importance to candidates to receive official backing from a party if they hoped to win seats. One outcome of this was increased power within the ruling coalition for the prime minister, who, as head of the main ruling party, wielded considerable sway in sanctioning candidates.

Next, the reorganization of the central government ministries and agencies in 2001 involved changes giving the prime minister enhanced legal authority in the form of the ability to directly propose new policy. This came together with an expansion of the power of the Cabinet Secretariat as a body supporting the premier’s policymaking and the launch of a new entity, the Cabinet Office. These steps bolstered the ability of the prime minister to put new policies in place. Together with the earlier electoral reforms, they served to strengthen the leadership role of the office both within the party and in the context of the cabinet system.

In 2013, Japan’s National Security Council took shape, increasing the prime minister’s capabilities in the fields of security and foreign policy. And in 2014 reforms to the civil service created the Cabinet Bureau of Personnel Affairs, giving the prime minister still more power to control selection of senior officials in the bureaucracy.

A Focus on Managing the Administration

Prime Minister Abe paid particular attention to the management of his administration. This involved limiting the number of major policy proposals his cabinet would make in any period of time and seeking to present them to the public in an easy-to-understand way. From soon after the launch of his administration in December 2012 through the autumn of 2015, he focused primarily on stimulating the economy through his Abenomics policies, the quiver containing the “three arrows” of aggressive monetary easing, flexibly applied fiscal stimulus, and a growth strategy to spur investment in the private sector. From autumn 2015 onward, he shifted to social policy, raising the banners of “work-style reforms” and a “revolution in human-resource development.”

Soon after its launch, the Abe government tapped Kuroda Haruhiko, an avid proponent of monetary easing, to lead the Bank of Japan and promote the first arrow of Abenomics. As part of the third arrow, its strategy to boost private-sector economic activity, it reduced the corporate tax rate, implemented changes to corporate governance requirements, and launched a series of agricultural reforms. Abe’s “workstyle reforms,” meanwhile, strengthened limits on workers’ overtime hours, while other policies made early childhood education and childcare free for three- to five-year-olds and made nursery care for children aged 0–2 and high-school education free for low-income households. In April 2014 his administration implemented the consumption tax hike taking it from 5% to 8%; an additional hike brought it to 10% for most purchases in October 2019, after two postponements to avoid a negative impact on the economy.

More than all of the above, though, what will likely come to be described as Abe’s legacy are his moves to enable Japan to engage in collective self-defense under certain conditions, by reinterpreting the Constitution to allow Japanese participation in such efforts in July 2014 and securing the passage of new national security legislation in September 2015. On Abe’s watch, Japan forged closer security ties with the United States. And after Washington unilaterally backed out of the Trans-Pacific Partnership, it was the Abe administration that led moves to formally conclude the CPTPP, or Comprehensive and Progressive Agreement for Trans-Pacific Partnership, with all other TPP signatories in March 2018. On the trade front, this was followed by the Japan-EU Economic Partnership Agreement, which went into force in February 2019.

In the Indo-Pacific region, Prime Minister Abe bolstered Japanese ties with Australia. Under the banner of the comprehensive Free and Open Indo-Pacific strategy, his administration pursued tighter cooperative ties on both the security and economic fronts with other nations in the region. We must note, of course, that Abe also presided over some negative developments: the worsening of Japan-Korea relations, stagnation in Japan’s negotiations toward a formal peace treaty with Russia, and the failure to resolve issues including the return of Japanese abducted by North Korea. On the whole, though, his was a broad record of success in various fields.

There was, indeed, a lack of transparency in some of his government’s decisions—for instance, the murky background to its approval of a new veterinary school under the Okayama University of Science, to be operated by the school operator Kake Gakuen, which brought Abe and his administration in for fierce public criticism. Another problem arose in connection with the heavily discounted purchase of national land by another school, Moritomo Gakuen in Osaka, whose details were similarly difficult to trace. This incident blossomed into criminal charges when it came to light that public documents describing the course of events had been doctored.

The race to replace Abe Shinzō in the nation’s top post is only now taking shape, and much remains unclear. It may remain a muddied contest right up to its conclusion.

It is uncertain, for example, whether the contest to select the next president of the LDP will take place according to the party rules spelling out the procedure—including voting by rank and file party members—or whether it will involve only LDP members from the Houses of Representatives and Councillors. Media reports are claiming that Nikai Toshihiro, the party’s secretary-general, is solely responsible for this decision. Generally speaking, an election with voting only by Diet members will fail to reflect the broader popular will as expressed through voting by the entire LDP membership; the intentions of powerful politicians in the party will hold more sway over the outcome as a result.

The big names now being touted as potential successors to Abe include Chief Cabinet Secretary Suga Yoshihide; Kishida Fumio, former foreign minister and current chair of the party’s powerful Policy Research Council; and Ishiba Shigeru, who has served as minister of defense and LDP secretary general. Kishida in particular has been mooted for some time as a possible post-Abe prime minister. Suga, meanwhile, has gained growing attention since his high-profile role in announcing Reiwa as the name of the current imperial era, and Ishiba earns consistently high marks in public opinion polls.

Judging from what we have seen in media reports thus far, Suga and Kishida are the front runners in this race. Recent opinion surveys, however, show the electorate to be more in favor of politicians like Ishiba, Environment Minister Koizumi Shinjirō, and Defense Minister Kōno Tarō, in that order. Whatever happens in the immediate future, the LDP is scheduled to hold a regular presidential election within the coming year, more or less. This will likely end up a contest to determine the “face of the Liberal Democrats” going forward. With this upcoming election in mind, it is easy to believe that many LDP Diet members will offer their support to one of these popular figures, making it less clear that the party’s kingmakers will be able to tap their own choice.

Making the waters still murkier is the presence of the LDP membership in the Diet’s upper house. There are more than 110 LDP pols in the House of Councillors, and with no election slated there for some time to come, they are less likely to be swayed by thoughts of picking an attractive standard-bearer for the party. Their moves will deserve particularly close attention if the party decides to have only the Joint Plenary Meeting of Diet members cast votes for Abe’s immediate successor.

(Originally written in Japanese. Banner photo: Abe Shinzō announces his intent to resign as prime minister at an August 28, 2020, press conference at the Kantei in Tokyo. © Jiji.)