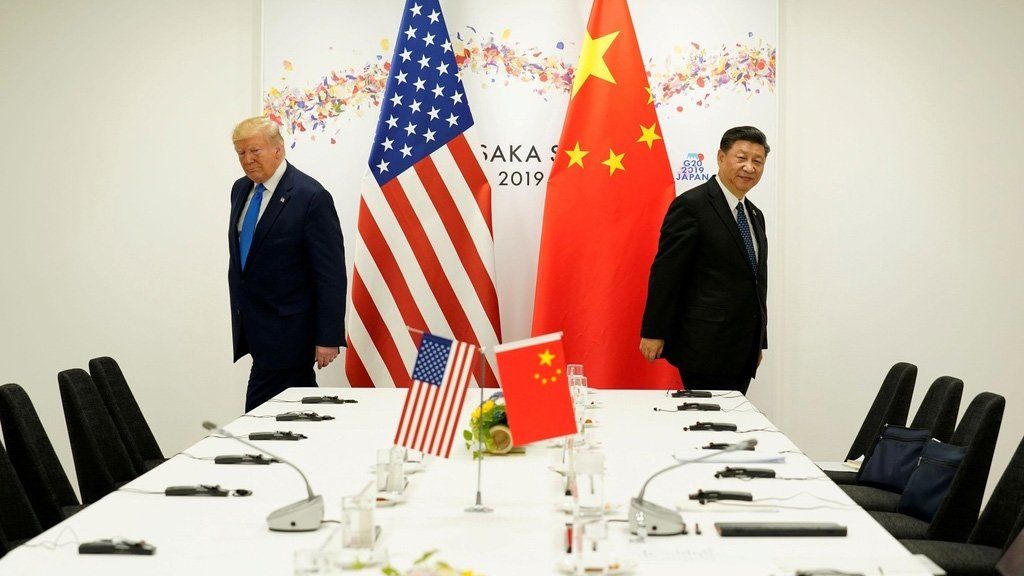 Headed for the G-Zero? The Next Phase for the World Economy

Politics Economy Jan 18, 2021
China is preparing for prolonged conflict if the United States continues to stand in the way of its expansion, no matter who leads the next administration. At the same time, this will likely lead to a downturn in the Chinese economy, preventing it from being an effective world leader. What is Japan’s role in such a “G-Zero” world?

Up through 2019, the recent conflict between the United States and China played out on two simultaneous fronts: a trade war led by US President Donald Trump and a high-tech war led by bipartisan anti-China hawks. Then 2020 brought a new wrinkle with the COVID-19 pandemic, which drove the two-pronged conflict into overdrive.

US Secretary of State Mike Pompeo and others began to openly accuse the Chinese Communist Party, as if to say ”overthrow the evil regime,” while China seems to have decided that no matter who its next president may be, the United States will continue to stand in the way of its development, and is preparing for a protracted and enduring struggle against its opponent.

China Ready for the Long Haul

China knows it is not yet ready to win any kind of open conflict with the United States, and has been in no hurry to give Trump reason to impose more extreme sanctions, particularly during his re-election campaign. So it has avoided open provocation. The fact that both sides still tout the 2019 Phase One Deal trade agreement that Trump spearheaded with China, despite the fact that there seems to be no hope of achieving its import goals, seems evidence of that.

At the same time, China is moving forward with preparations for a lengthy struggle with the United States, and has recently begun to champion a new economic slogan, the Domestic Grand Cycle—a focus on internal development while moving away from foreign-trade-dependent economic growth. This is unlikely to mean a complete shift to an inward-looking economy, but does reflect China’s awareness that it has grown overdependent on external demand, especially from the United States.

There are two specific issues which call for a break from dependence on the United States. The first is a response to the United States’ high-tech cold war posture, which has grown increasingly aggressive, and has begun to have a huge influence on the tech industry in both the United States and Japan. China has begun to sense particular danger in the semiconductor battle, and the effort put into domestic semiconductor production is reminiscent of wartime industrial mobilization. The road will be long, but if China catches up in technology in the future, then Western semiconductor production will be seriously affected.

The second issue is breaking Chinese dependence on the dollar. China is increasingly worried about the United States taking more hardline measures like dollar sanctions against Chinese financial institutions. Large-scale sanctions are so dangerous they are sometimes termed “economic nuclear weapons,” and if implemented without extreme caution could result in a worldwide stop to Chinese trade. That would send shockwaves throughout the global economy, and even the United States is hesitant to take such drastic measures—but if such sanctions are imposed, China will have few ways to respond.

China has developed a possible countermeasure with the digital yuan. If the digital yuan is to replace US dollar payments, rules and procedures for international remittances and settlements must be agreed upon one by one with the relevant financial institutions of trading partner countries. There is simply no way to quickly replace the current dollar-based international financial infrastructure. However, chances are that whatever system it develops will eventually see wider adoption if it becomes the only way to continue trade with China. The more the new mechanism spreads, the more the US dollar hegemon recedes. Indeed, China might already have begun discussing countermeasures in secret with some countries.

Stepping Back from Wolf Warrior Diplomacy?

China’s reputation has suffered in 2020, in particular due to its forced security law passage in Hong Kong and its openly aggressive responses to international media criticism of its so-called “mask diplomacy.” This seems an unusual change for Chinese diplomacy, which has in the past been highly averse to international isolation—although China does still have many nations taking its side, especially in the developing world, so is perhaps not as isolated as it seems from the outside. This new confrontational style is known as Wolf Warrior diplomacy, and has become particularly evident since the beginning of the pandemic.

One reason for this more aggressive stance might be the birth of a “China as number one” sentiment among the population, possibly sparked by the obvious differences in COVID-19 response effectiveness. Chinese authorities were able to bring pandemic under control relatively quickly, while Western nations are still unable to escape from the quagmire of the dichotomy between infection prevention and economic recovery.

There are certainly things the West could learn from the Chinese response, but If a mood of conceit that “we don’t care if the declining West hates us” develops in China, it will surely be a future source of regret.

There is also concern that international isolation is a problem, which can be sensed from Xi Jinping’s September address to the United Nations, when he promised that China would be “carbon neutral by 2060.” It was clearly a jab at Trump for withdrawing the United States from the Paris Agreement, but was also an obvious attempt to restore China’s image with environmentally conscious Europe in a step back from Wolf Warrior posturing.

Now, world attention is focusing on the development of a vaccine for the COVID-19 virus, whose spread much of the world blames on China. If China were to successfully develop a vaccine, we could see it supplied to the developing world next year in an act of “vaccine diplomacy.”

Why No Fear of Conflict?

China is bracing itself for unforeseen attacks from the United States, but that is not to say it is ready to apologize or accede out of fear. There are two reasons to be sure of this.

The first is the Chinese tradition of absolute resistance to external enemies. This way of thinking has been deeply ingrained in the mindset and actions of the Chinese people by what they view as “the century of humiliation,” with the 1899–1901 Boxer Rebellion and the 1937–45 Second Sino-Japanese War. This stance of resistance to foreign powers had gradually quieted down as the nation saw its power increase, but today attacks from the United States have once again triggered the resistance sentiment among the Chinese people.

The second reason is that China sees the United States as a power in decline. The growing national divisions and the inability to build national consensus within the United States has mired its political system in a state of confusion. China seems to believe there is no future for such a country.

Now, the outcome of the US presidential election is more and more unclear. Trump may refuse to admit defeat even after Biden’s victory is officially confirmed, and there is growing fear that the transition will result in even greater instability. Whatever happens, it seems certain that the internal divisions in America will only grow deeper. As China watches the situation in the United States, there must be a view that “time is on China’s side,” if it can only hold out long enough.

However, that may not actually be the case.

Over the last 10 years, China has overextended its economy through debt and debt-financed investment. As a result, it has accumulated bad investments that undermine its economy by not generating enough economic benefit.

However, China is a country where massive economic power still rests in the government’s hands. It can use that power to provide an “implicit government guarantee” for both private and public debt, allowing continued refinancing even for non-performing investments. As a result, the obvious symptoms of bad debt and bursting bubbles are held at bay in the short term, but the undeniable truth remains that bad investments cannot grow an economy, and continually refinanced, but ultimately unpaid loans can only continue to pile up.

I imagine problems will arise in two areas. The first is happening already, in state finances. China has budgeted for a deficit that will exceed the traditional red line of 3% of GDP in 2020, but a large part of that budget has been allocated to covering local financial shortfalls caused by over-investment in the past decade. The balance of payments for social security, including pensions, is another concern. Up until 10 years ago, the official stance was that the system would be able to maintain a surplus in the 2020s, but it has already begun to ask for a fiscal supplement of 1.5% of GDP.

Further deficits can be controlled by maintaining economic growth rates, but that must be real growth powered by private-sector productivity gains, rather than pretense growth based on debt-inflated investments. The current Xi administration is likely to confront financial difficulties through party and governmental intervention in good-performing private enterprise, siphoning off private-sector profits to cover public losses.

A second issue is that delaying disposal of bad loans is exacerbating the Chinese economy’s problems. Continuing to pay interest on bad loans is in actuality simply transferring wealth to creditors who do not deserve it. China’s outstanding financial assets stand at around 300 trillion yuan. Given the size of implicit bad loans, the scale of such unjustifiable transfer of wealth could amount to trillions of yuan a year, and would go to benefit the undeserving: the wealthy and the state sector that control banking industries. The increasing wealth gap and guo jin min tui, “the state enterprise advances, the private sector retreats”—a phenomenon in which state-owned enterprises are given favorable competitive conditions, leading to the state-owned sector’s expansion—are both serious problems for China’s economy. These problems are exacerbated by a common cause: the implicit guarantees provided by a powerful government. It is difficult to see how China’s economy can grow if this situation continues.

China’s belief that US hegemony is crumbling could be accurate, but it is also highly likely that the Chinese economy could see a downturn in the long term. The prospect of greater conflict between the world’s two superpowers is frightening, but over the longer term both will probably go into decline together and lose the ability to deal with international problems. If the world were to head into such a “G-Zero” state, with no clear leading superpowers at the top of the international community, almost every country except China and the United States will be in for an exceedingly difficult struggle.

This should prompt Japan to strengthen its ties with other smaller nations, and it should also advocate a stance of holding fast to a raft of commonly held principles so as not to get swept away by the big waves that will hit the world. Those principles are the freedom, democracy, and human rights, as well as the market economy and free trade. Doing so will not guarantee safety or stability on its own, but without those principles, the world will simply be tossed on the waves of chaos.

There will be countries hoping and waiting for Japan to take that initiative, simply because they can only imagine very few countries capable of stepping up to do so at this moment.

(Translated from Japanese. Banner photo: US President Donald Trump and Chinese President Xi Jinping take their seats at a summit meeting held during the G20 Summit in Osaka, June 19, 2019. © Reuters/Kyōdō.)