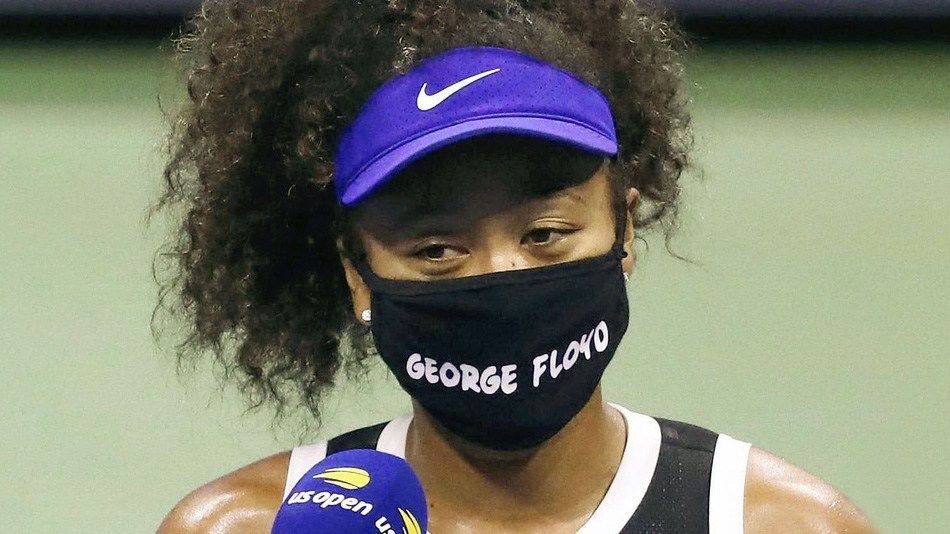 Sports Tokyo 2020 Nov 14, 2020
Professional tennis player Osaka Naomi with her Black Lives Matter activism broke with the custom of Japanese athletes refraining from speaking out on social issues. Ahead of the Tokyo Olympics and Paralympics, governing bodies need to rethink how to approach protests by competitors and consider if the time has come to amend the Olympic Charter.

An Era of Protest

It is only natural that Osaka Naomi holds stronger views on calling out racism than other Japanese athletes. Born in Japan to a Haitian father and Japanese mother, she moved to the United States when she was three years old, where she experienced firsthand the “melting pot” of American society. Her mask protest should also be considered as being in step with the tone of US sports. Many claim that she became more politically outspoken after signing a sponsorship deal with footwear manufacturer Nike in 2019. In fact, an incident involving a Nike-sponsored American football player appears to be closely linked to her activism.

In August 2016, Colin Kaepernick, a star quarterback for the San Francisco 49ers, caused an uproar by kneeling on one knee during the US national anthem to protest racism. Kaepernick’s actions inspired other athletes to “take a knee,” drawing the ire of President Donald Trump, who ripped into the protesting players and suggested they should be “fired” for disrespecting the flag.

Kaepernick ended his contract with the 49ers at the end of the season and became a free agent the following year. Three years later, he has yet to be signed by another team.

In 2018, Nike featured a photograph of Kaepernick, who was effectively barred from playing football, in an advertisement along with the message “Believe in something. Even if it means sacrificing everything.”

Nike released a television commercial following signing Osaka that packed a similarly strong punch. It depicted the tennis player engrossed in practicing her shot while reporters bombard her with all manner of questions. Unfazed, Osaka puts her fingers to her lips to silence the barrage of questions before smashing the ball over the net, the words “Don’t change yourself. Change the world” appearing on the screen.

The message to viewers from both advertisements is that sport transcends race and nationality. In contrast to Japanese corporations, who tend to avoid wading into heady social issues like discrimination, Nike appears to be increasing its brand value by using athletes as vehicles to express its corporate principles.

Issues of discrimination are not unique to the United States. Incidents of racial slurs being hurled from the stands at black players is still all too common at European soccer matches. In recent years, the J. League, Japan’s professional soccer league, has seen cases of racial discrimination, such as a 2014 incident in which supporters of the Urawa Reds hung a banner that said “Japanese Only” at the entrance to the stands. The J. League forced Urawa to play their next home match in front of empty stands, dealing a harsh penalty in the form of lost ticket revenue to the heavily supported club. Discrimination has reared its head at other clubs as well, giving the impression that intolerance is gradually taking hold in Japanese sports. Racism is no longer just a concern for sporting bodies in other countries—it is something that happens here too.

The history of discrimination in Japanese sport stretches well into the prewar era. The most infamous case is of Korean marathon runners Son Kee-chung and Nam Sung-yong, who under Japanese military occupation of the Korean Peninsula competed for Japan at the 1936 Berlin Olympics. During the Parade of Nations, one of the members of the Japanese delegation, a rider from the imperial cavalry, complained loudly about being made to walk behind the Korean athletes. Triple-jumper and flag bearer Ōshima Kenkichi sternly rebuked the man, telling him that the Olympics are a celebration of peace. “Here we’re neither Japanese nor Korean, just athletes,” he scolded. “If you can’t accept that, then leave.”

Son went on to win gold in the marathon and Nam bronze. However, when Korean newspaper Donga-A Ilbo printed a photo of the athletes with the Japanese flags airbrushed from their uniforms, authorities heavily censured the publication, forcing it to temporarily suspend operations and throwing the reporter responsible in jail. While Nam continued to run after the war, appearing in prestigious events like the Boston Marathon, Son never returned to competition out of fear that his participation could spark ethnic conflict between Japanese and Koreans. However, he never forgot Ōshima’s bravery in Berlin, and the two men remained friends even after the war. In his autobiography, Ā Gekkeikan ni Namida (Tears Beneath the Laurel Wreath), Son writes that Ōshima “taught me how precious international friendships are in sport.”

The incident raises the question of how Japanese athletes would handle similar issues of racial or ethnic discrimination today. People can easily make their opinions known on social media, and yet Japanese athletes tend to remain tight-lipped on social issues. This reticence likely stems as much from the deep-rooted Japanese idea of keeping sports and politics separate as the Japanese idealization of single-minded dedication to one’s sport at the exclusion of all else.

An example of the negative impact of mixing sports and politics can be found in the Japanese Olympic Committee’s decision to boycott the 1980 Moscow Olympics, a move stemming from the Japanese government’s subservience to the United States. The government pressured the JOC into boycotting the games by hinting that they would halt national training grants if the organization refused to go along with the politically motivated boycott. This event remains a sore spot in the Japanese sporting community, but the legacy of political tampering was not enough to provoke athletes and governing bodies to decry the central government hijacking the Tokyo Olympics and turning the games into a national project. They have remained equally silent about the challenges of ensuring the health and safety of participants during the coronavirus pandemic, preferring to leave the government and Organizing Committee to control the narrative.

I believe that Japanese athletes should not shirk from sharing their view and instead follow the lead of counterparts in other countries who actively take positions on social issues. Athletes have a great deal of influence on public opinion, and competitors in Japan need to take a stand on issues of racial and ethnic discrimination.

Reflecting on the True Spirit of the Olympic Charter

It is easy to imagine political activism by athletes resulting in turmoil. As a preventative measure, Rule 50 of the Olympic Charter states that “no kind of demonstration or political, religious, or racial propaganda is permitted in any Olympic sites, venues or other areas.” With the Olympics watched by the whole word, there is also the real possibility that athletes could be exploited for political ends by states seeking to exert their national prestige.

As the Black Lives Matter movement gains momentum, though, there are increasing calls from around the world to remove Rule 50 from the Charter. When visiting Japan for the first time in October, World Athletics head Sebastian Coe expressed his support of the rights of athletes to take a knee on the medal podium, saying that “athletes are a part of the world and they want to reflect the world they live in. For me, that part is perfectly acceptable.”

Rather than framing racism as a political issue, we must see it as an affront to universal human rights that the whole world needs to work to stamp out. We need to debate the issue in reference to Article 6 of the Charter’s Fundamental Principles, which states that the rights and freedoms set forth in the document are guaranteed “without discrimination of any kind.”

The world is at increasing risk of becoming more divided as the pressures of globalization drive countries to safeguard their interests and travel restrictions due to the coronavirus pandemic keep people within their own borders. Can the Olympics help to close the rifts between nations? I hope the world will reconsider the true significance of the Olympics as a forum for accepting each other’s diversity through sport.

(Originally written in Japanese. Banner photo: Osaka Naomi wears a mask bearing the name of George Floyd during an interview at the US Open in September 2020. © Getty/Kyōdō.)