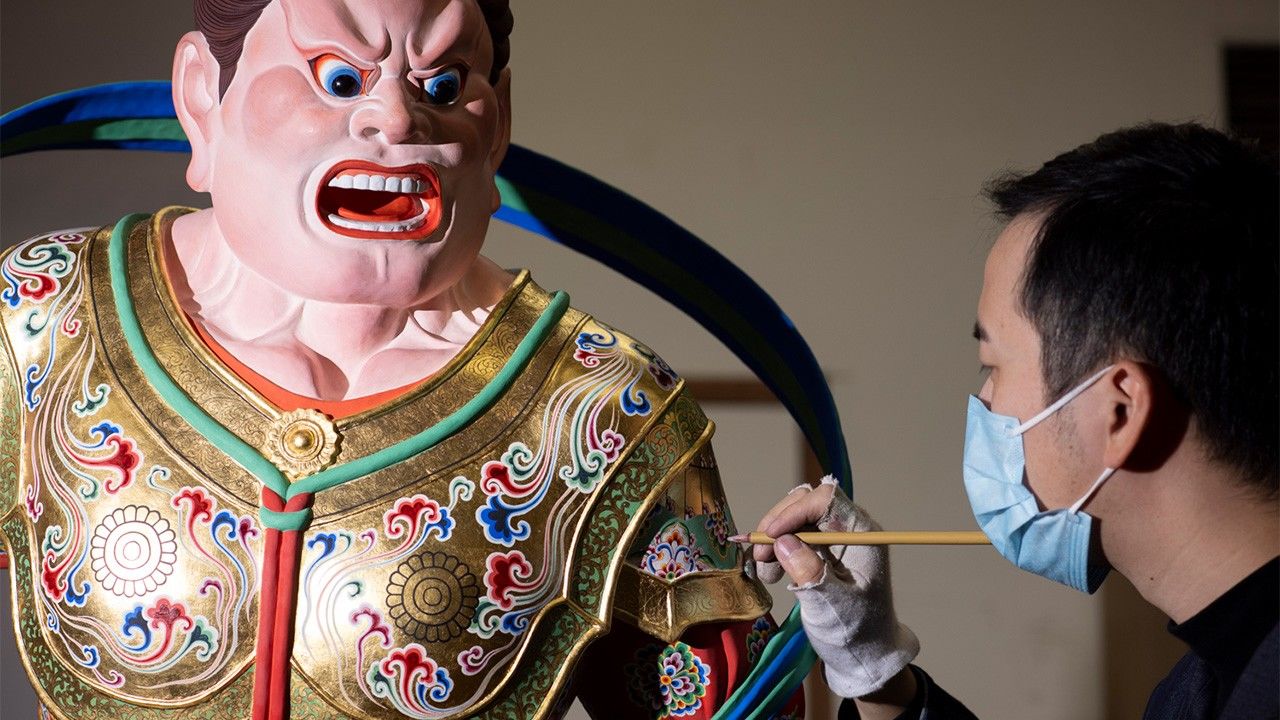 Culture Arts Entertainment History Nov 20, 2020
A team of Japanese, Chinese, and Taiwanese students and technical staff has taken up the challenge of re-creating a 13-century-old Buddhist statue in all its original vibrant colors. The statue will go on public display at the Tokyo University of the Arts from November 19 to 29.

Buried Artifacts in China and Passed-Down Art in Japan

Buddhism, which originally entered China through its western regions, has undergone phases of great popularity and immense persecution in that land, depending on the dynasty in power. China’s most-recent anti-Buddhism policies were implemented in the country’s 1966–76 Cultural Revolution. In recent decades, though, along with China’s nationwide urban development necessitated by its rampant economic progress, a vast number of Buddhist cultural assets have been unearthed in pristine condition, having been protected by the earth in which they were buried.

For murals buried in the desert, such as those in Dunhuang in China, facilities to restore them and experts are available in Japan thanks to the efforts of Hirayama Ikuo, the late president of the Tokyo University of the Arts. But in the areas of research into classical artistic techniques and restoration methods for sculptural cultural assets, the stark lack of Chinese experience and experts had become a problem.

Japan has a different history. Situated on the far edge of East Asia, Japan transformed culture that arrived on its shores from overseas, while simultaneously conserving it and handing it down to successive generations. This conservation and restoration work has been ceaselessly carried out by Japanese craftspeople through the ages. 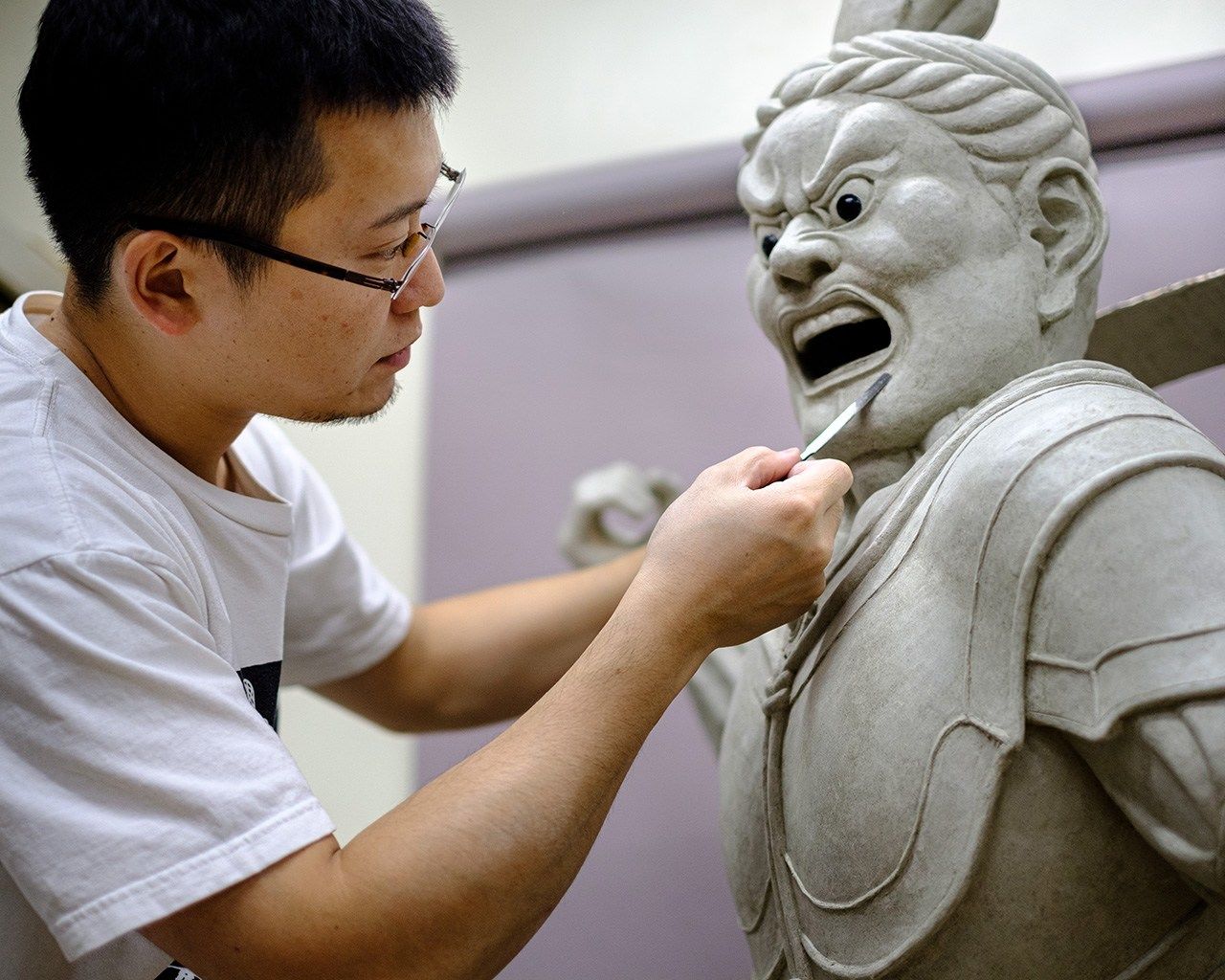 In Japan, an ordinance separating the native Shintō from the imported faith of Buddhism, which was enacted in the first year of the Meiji Period (1868), whipped up an anti-Buddhism storm. This order was a policy that dissolved more than a millennium of syncretism between Shintō and Buddhism, officially and forcibly splitting them apart. The newly installed Meiji government, however, had no intention of abolishing Buddhism. This order was reviewed after just three years, and a policy was subsequently formulated to protect the country’s Buddhist cultural assets, defining them as part of the Japanese identity. Thanks to this history, Japan is now abundant with artifacts passed down from almost every era since Buddhism arrived in the country over 1,500 years ago. And Japan has inherited the technologies and techniques of these artifacts. In this sense, Japan is a rare storehouse for these treasures. The Tokyo Fine Arts School was conceived and founded by Okakura Kakuzō in 1887 to cultivate people well-versed in those skills in Japan’s modernized education system. This school ultimately became the Faculty of Fine Arts at the Tokyo University of the Arts, to which our team belongs.

Clay Modelling in the Eighth Century

Some 90% of Buddhist sculptures that arrived in Japan from the sixth century onward are made of wood. But during the Tenpyō Period (729–749), almost no wooden statues were made; gilt-bronze statues, dry-lacquered statues, and clay statues became the norm. This change was due to the imperial court’s attempt to remove the Korean peninsula’s influence and transplant the culture of Tang China to Japan in a more direct form. The techniques used for dry-lacquered statues and clay statues were the most popular and admired in southern China during the Tang Dynasty (618–907). 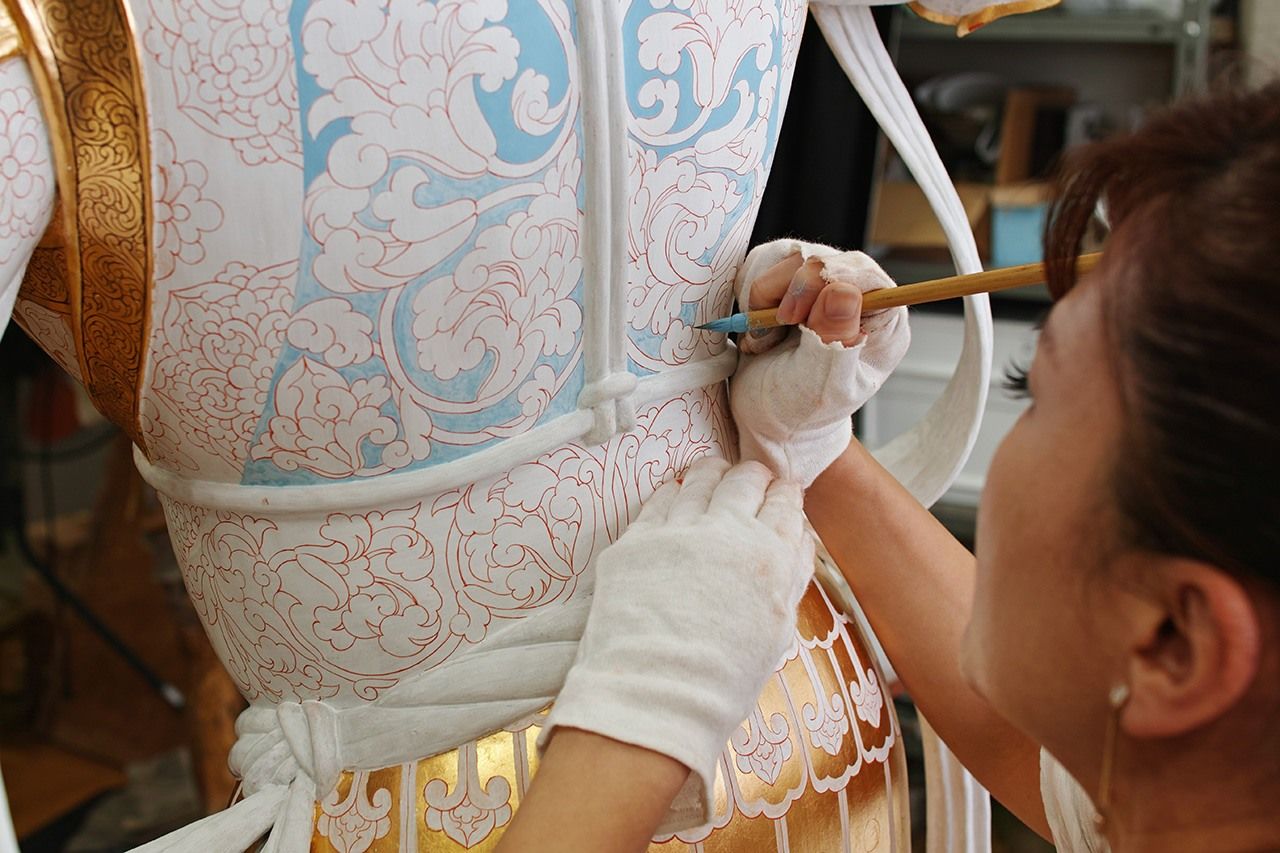 In ungen saishiki (banded coloring), a color is applied at various strengths in multiple bands. These multiple applications are used rather than simply painting a deep color on a white foundation. Here an artist applies the very light blue layer. (© Kojima Hisanori)

Lacquer is a product of the culture of the Yangtze River basin of China, an area marked by the intertwining water systems and forests that occupy much of southern China. The sculptural techniques that are used for clay modelling are the same as those used to make mud walls. Clay statues are created by erecting a wooden rod, wrapping straw rope around the rod, and then adding coarse soil, a middle coat, and a fine soil to finish the sculpting. Sticky earth containing much organic matter is suitable for this technique. Such soil comes from paddy fields, so is closely connected with the rice-production culture of Jiangnan (an area to the south of the Yangtze River).

After clay modeling is complete, plaster or lacquer is applied to make the clay water resistant. Mineral pigments are then dissolved in glue and used to apply bright colors. Unlike Western sculpting, in which the soil is replaced with bronze, for these classical sozō statues, the modelled clay is the finished sculpture. But no matter how many waterproof layers are applied to a clay statue, in Japan, with its plentiful rain and frequent earthquakes, clay statues tend not to stay well preserved. Due to that, from the Heian Period (794–1185) onward, use of clay statues rapidly declined in Japan, and Buddhist statues in Japan made thereafter were overwhelmingly wooden. 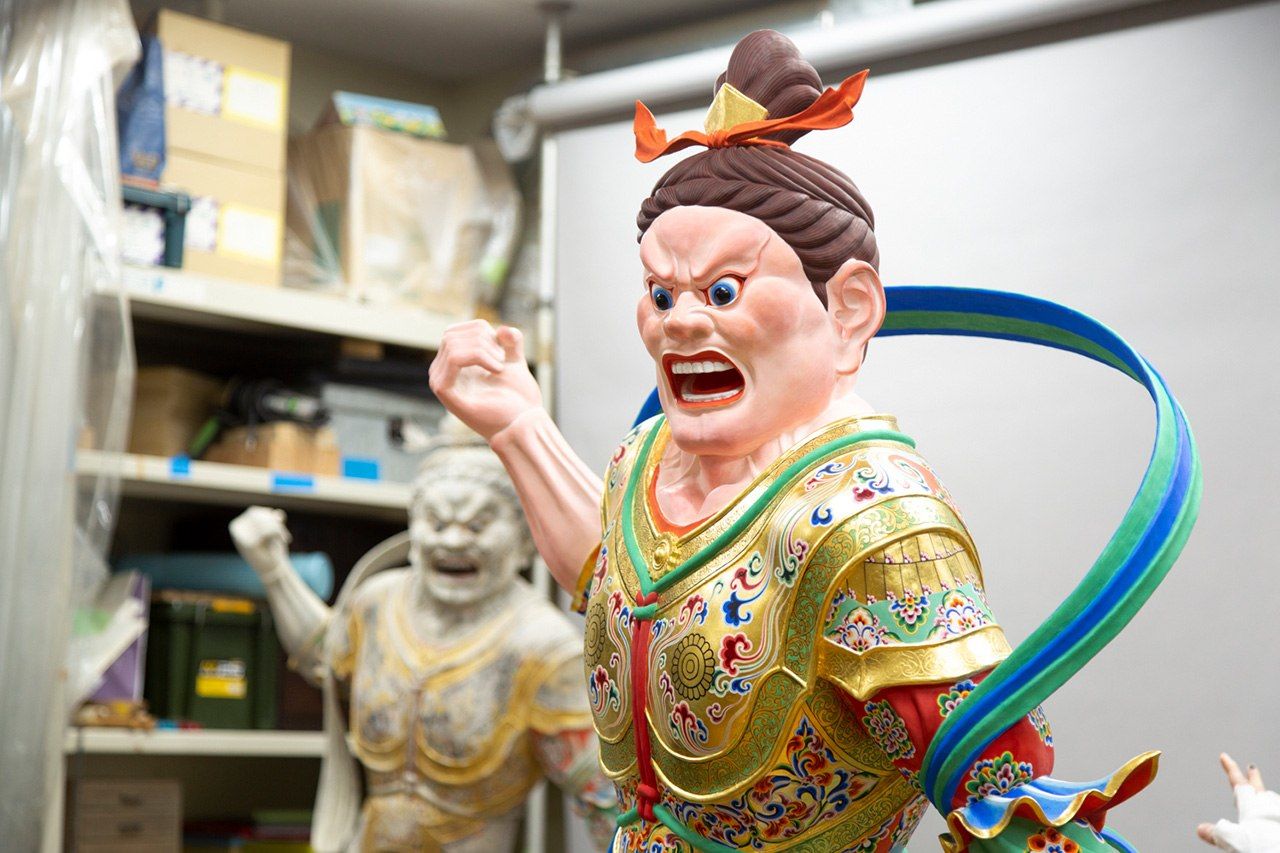 A clay statue in the foreground; in the background is a re-creation of the original dry-lacquered version. Shigematsu Yūshi created them both based on computerized data provided by Yamada Osamu, a speciallyappointed professor at the Tokyo University of the Arts. (© Kawamoto Seiya)

Few students are admitted to study on the course in which I’m enrolled. The number of students admitted is limited to under 10 (both master’s and doctoral course students), and 5 of them are overseas students from China and Taiwan. There are also several Chinese people who are enrolled as technical staff. 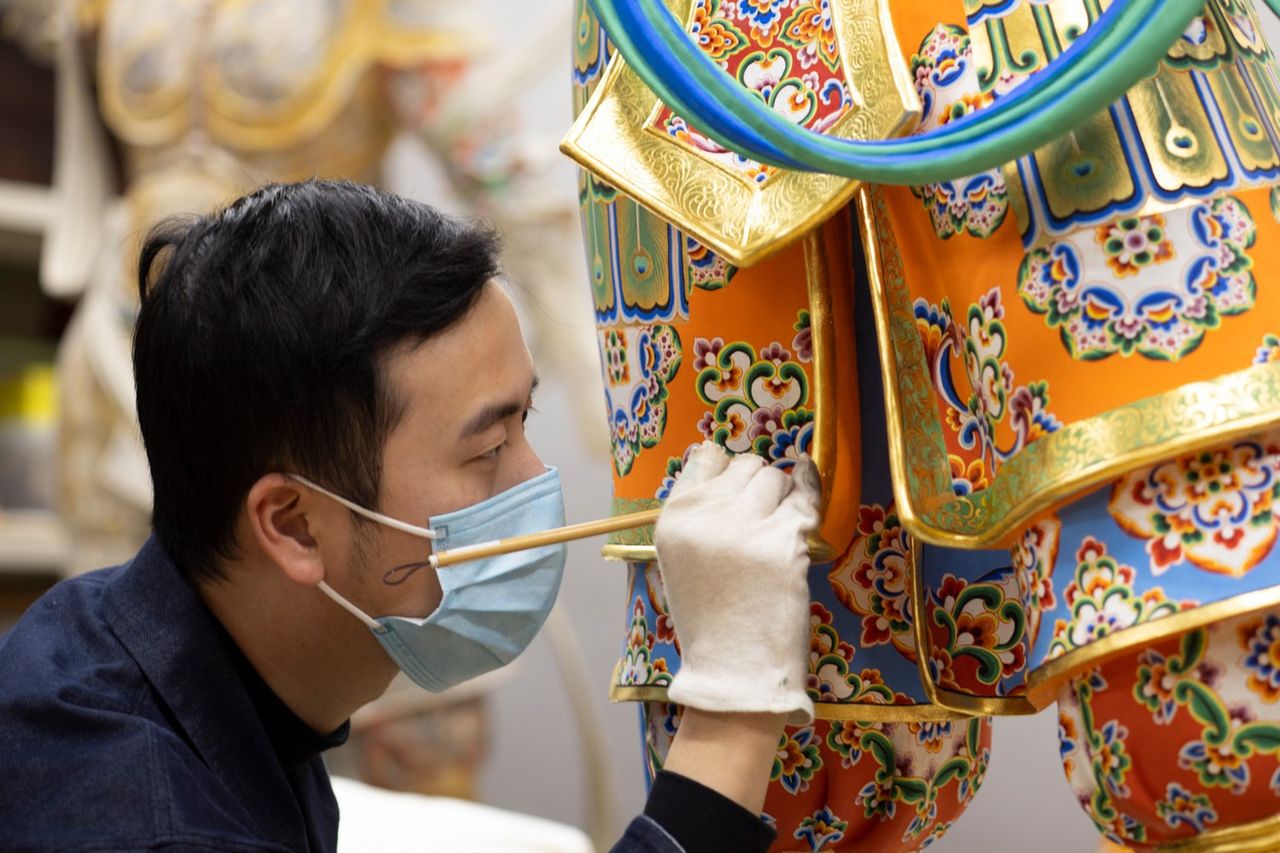 Cho Hinbun, a nihonga (Japanese painting) artist and graduate of the Tokyo University of the Arts, is on the coloring staff. Here he puts finishing touches on a statue. While working in physically awkward positions, he pays careful attention to the statue’s legs and other inconspicuous places. (© Kawamoto Seiya)

As mentioned above, after one Chinese dynasty defended Buddhism, the next would destroy the previous dynasty’s Buddhist statuary. To make matters more complex, regimes attempting to make Buddhism flourish would re-create the old Buddhist statues that had been destroyed to match the taste of the new era. Due to this history, places like Japan, in which Buddhist statues from nearly all of these eras remain, are extremely rare. From the Asuka Period (593–710) onwards, Japanese culture has displayed a constant history of being influenced by and benefitting from the civilizations of its continental neighbors. This is true of most Buddhist cultural assets, which came to Japan via mainland China—where, sadly, most of the skills to create them no longer exist. 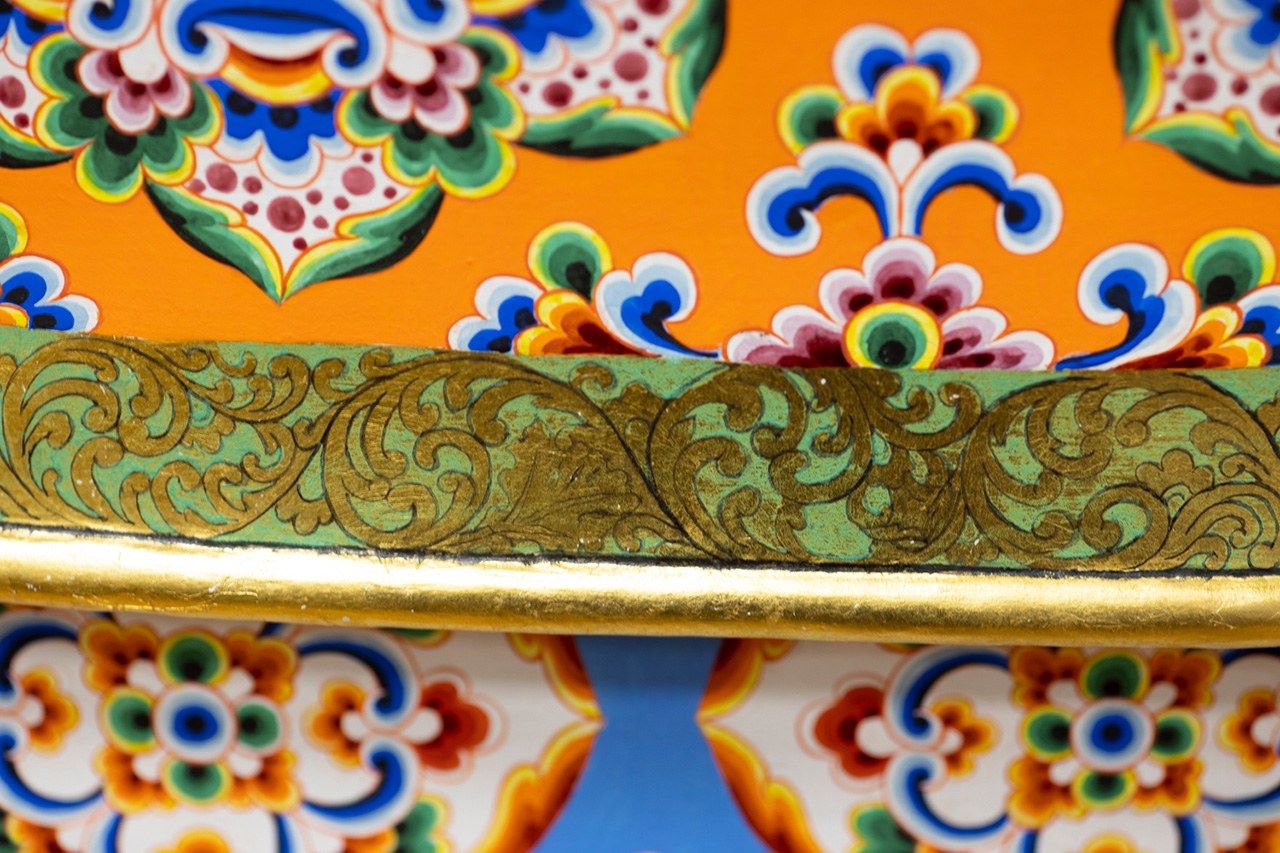 The foliage, painted with ink on a gold leaf base, is beautifully enlivened by application of a patina color to surrounding parts. (© Kawamoto Seiya)

In recent years, China has vigorously promoted conserving, reviving, and using its cultural assets as part of a concerted policy to establish a national identity. To pay a 1,300-year-long debt of gratitude to China, we teach overseas students the techniques needed to create genuine Buddhist statues—such as dry lacquering and clay modelling—as well as conservation and restoration techniques that Japan learned from its continental neighbor. I look forward to the day when, in the not-too-distant future, these students are active on the forefront of protecting cultural assets in their own countries. I hope that this will contribute to peace and stability in East Asia. It goes without saying that I also expect the Japanese students to go on to do great things too. 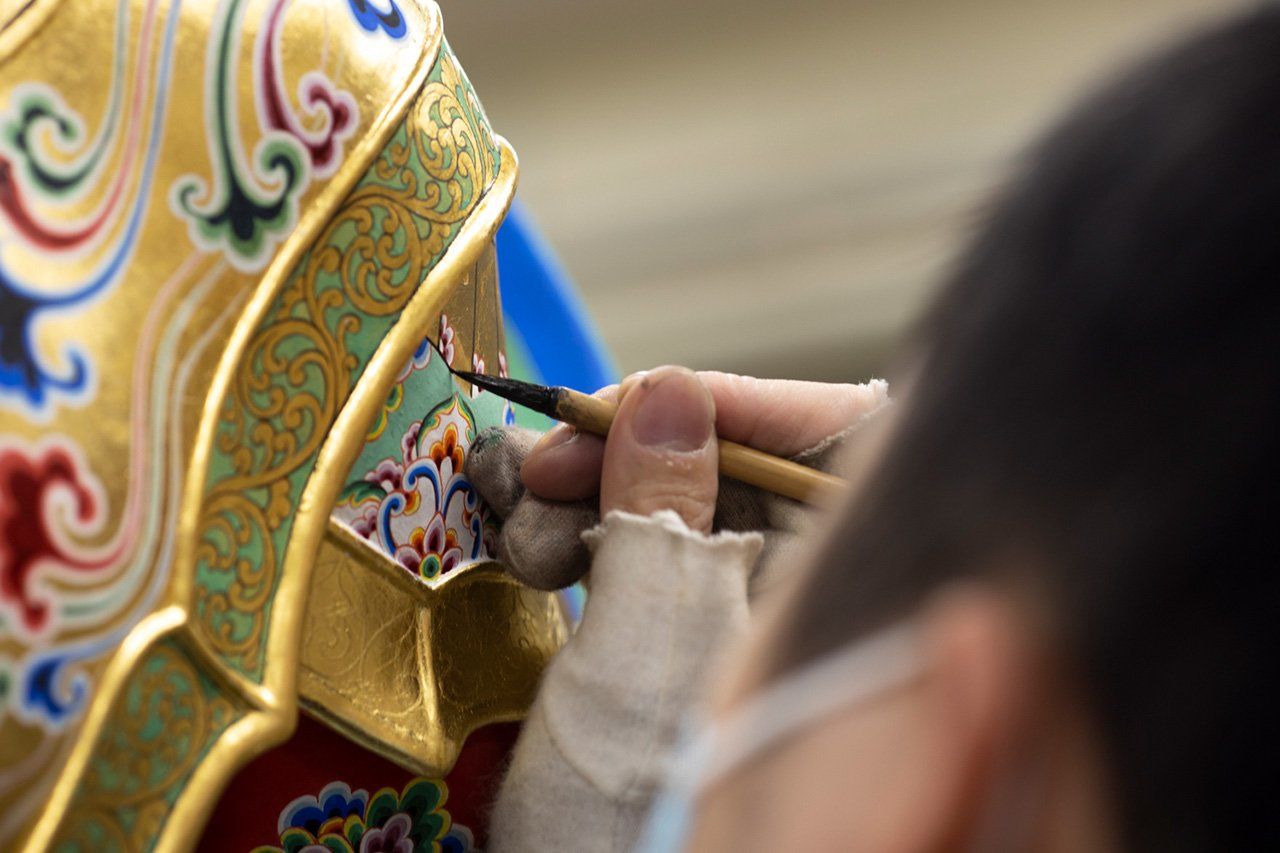 Works of Craft at the Pinnacle of Silk Road Culture

One project that symbolizes our gratitude is our 2020 project to completely re-create the Shukongōshin, which is housed in Hokkedō, the oldest structure in the grounds of the Nara temple Tōdaiji. This statue, crafted before Tōdaiji was founded in 728, is a clay idol belonging to Rōben Sōjō, the priestly founder of Tōdaiji who was believed to be able to work miracles. The idol is stored in a small shrine at the rear of Hokkedō’s principle icon, the Fukūkensaku Kannon (the Bodhisattva Avalokitesvara). The doors of this shrine are opened just once each year to reveal the statue, and, thanks to that, its colors and other features are well preserved. 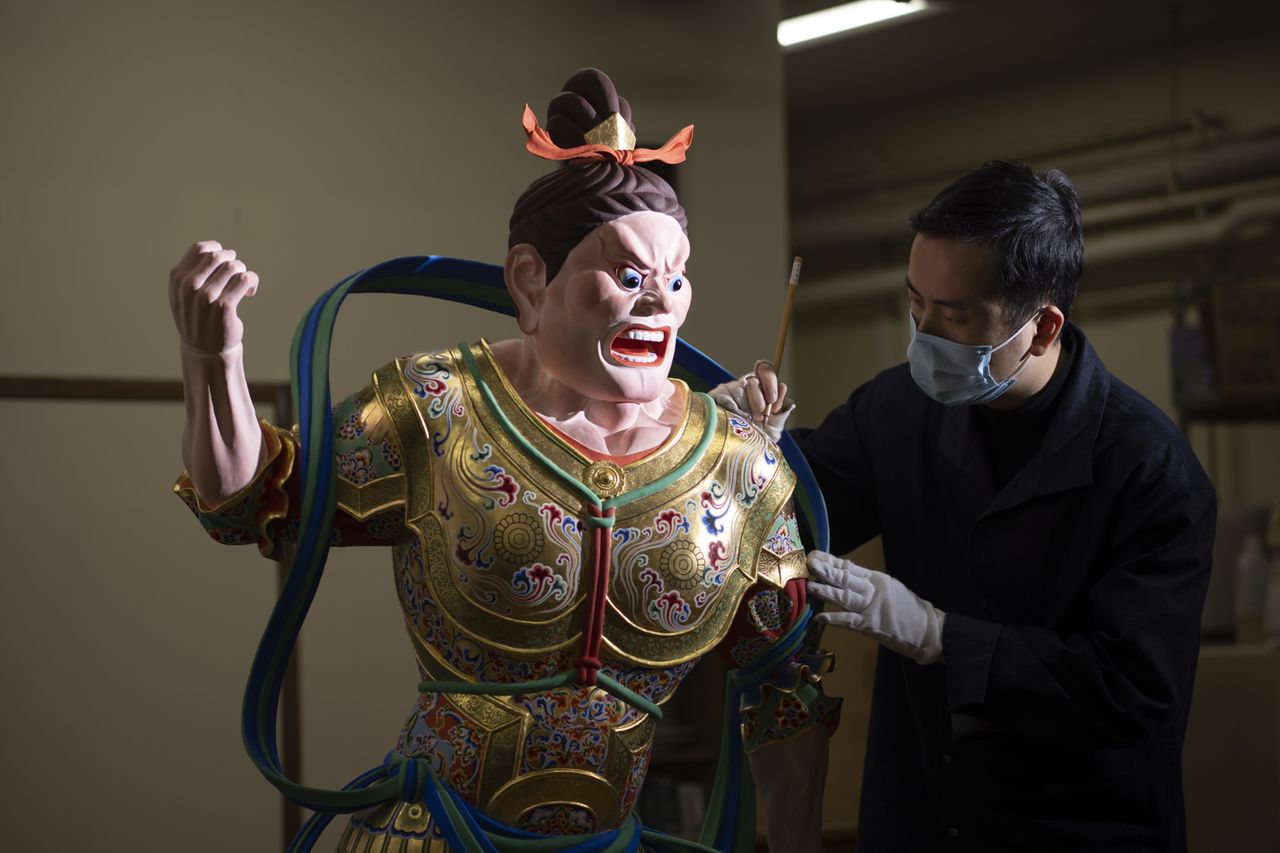 Judging from the statue’s armor and other elements, it was likely modeled after an Iranian-Sogdian military commander. It is conceivable that the statue’s creator was not a Tang maker of Buddhist images and altar fittings (in other words, not a Chinese person) judging from the high level of realism and the three-dimensionality of the modeling of the figure’s high waist.

The imperial treasures stored in the Shōsōin Repository (part of Tōdaiji) are said to represent the pinnacle of Silk Road works of craft. In this sense, the statue is a magnificent specimen of sculpting in the Silk Road cultural sphere, in light of the fact that no sculptures comparable to it remain on the continent. 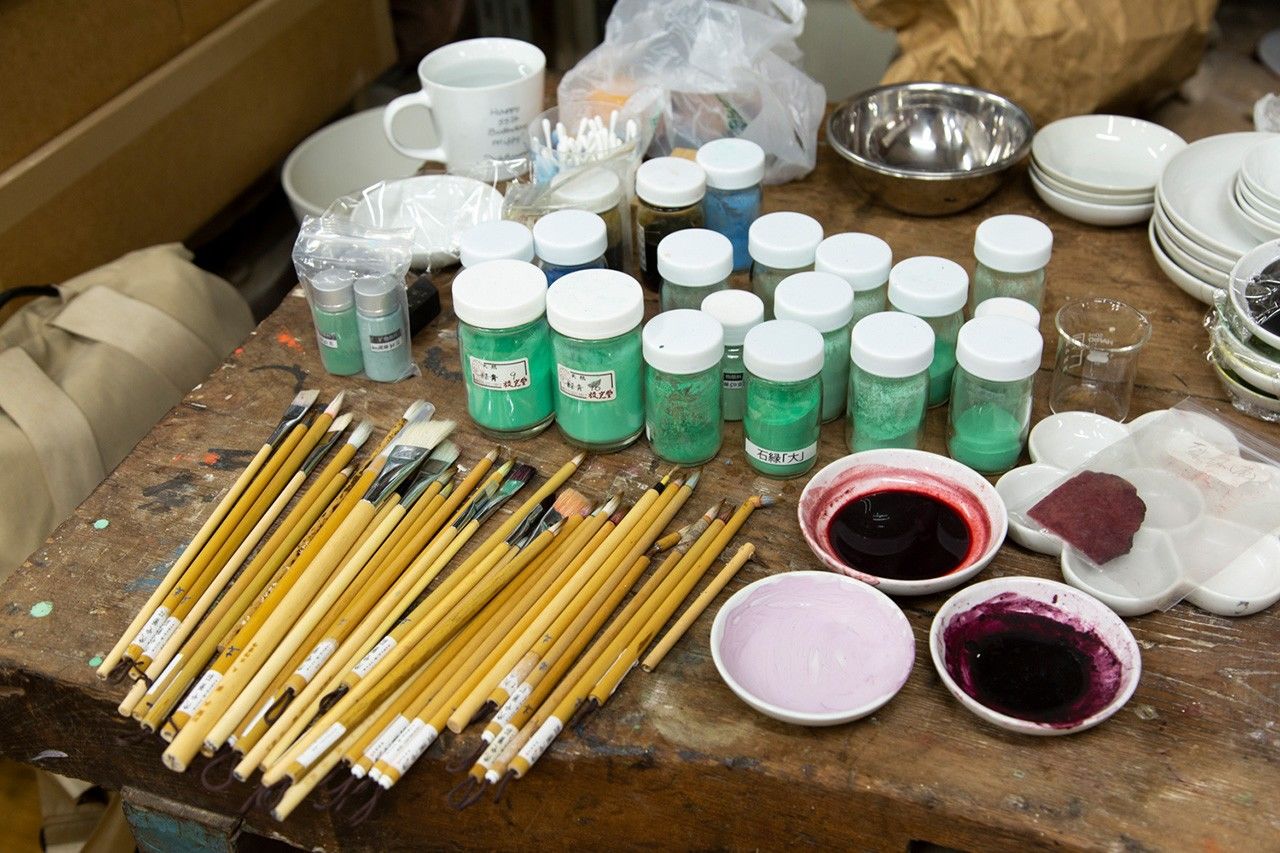 Mineral pigments that do not exist in Japan are obtained from China. (© Kawamoto Seiya)

Although the statue is well preserved, it is 1,300 years old, so its coloring has significantly faded, making it difficult to re-create many of its parts. Around 10 years ago, our laboratory was given the opportunity to conduct a comprehensive scientific survey of the statue at the request of Tōdaiji. Shigematsu Yūshi, who completed his doctorate in 2019 using data from that survey, has brought it back to life in the form of a wonderful clay replica. The laboratory’s coloring staff formed a project team to re-create the magnificent coloring of the original on this clay version. The coloring was applied using ungen saishiki, a banded coloring technique in which gradations are created without mixing colors, akin to weaving and tiling. This method originated in Iran and Turkey and was brought to Japan via the Silk Road. In ancient times, expensive minerals and pigments made of crushed precious stone were symbols of wealth and power. Imagine how this statue must have fired up Emperor Shōmu (701–756) and the others who obtained as part of their efforts to build the nation of Japan! 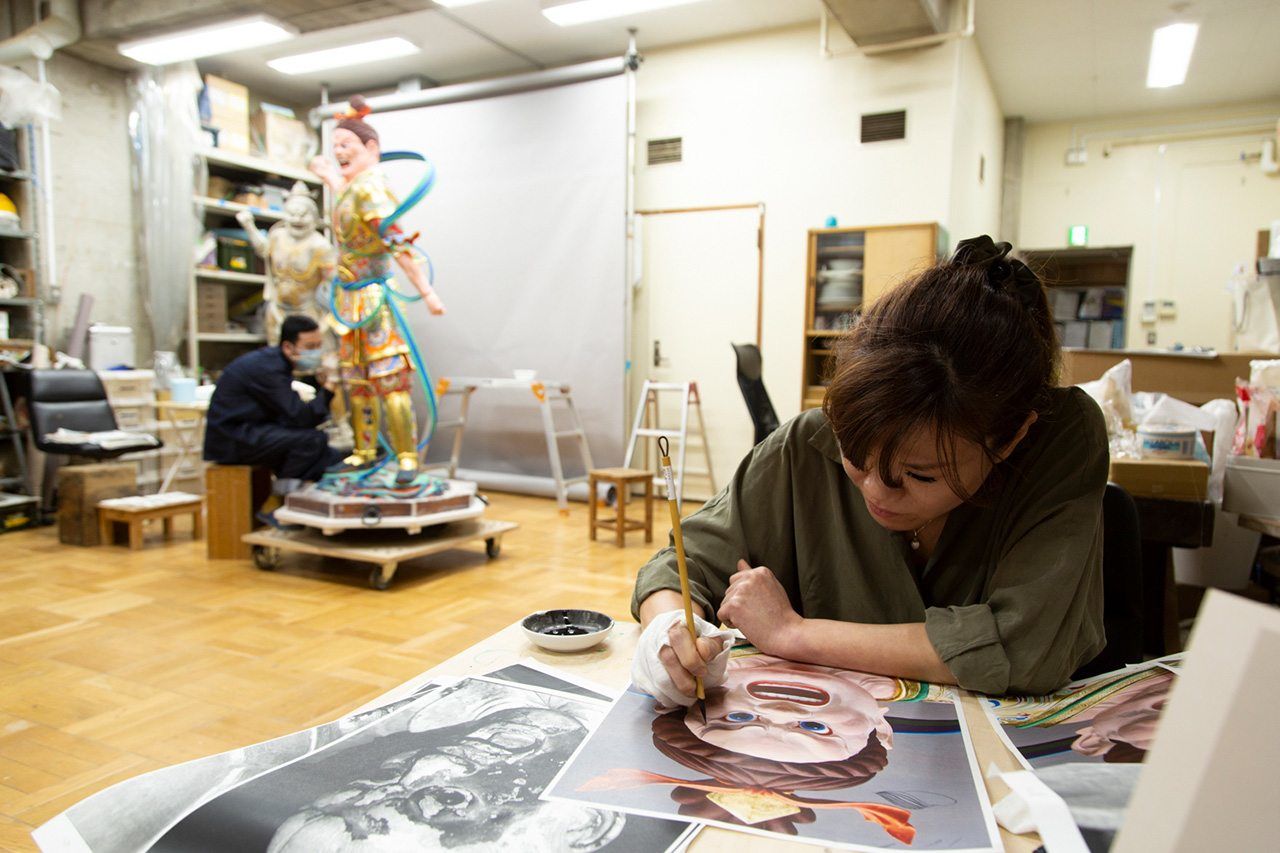 The facial expression is a vital part of a statue. The coloring stage, which comes last, is especially difficult here, due to the face’s conspicuous nature. Before applying paint to the sculpture, Inuma Haruko tests painting different expressions on a flat surface with the help of reference materials. (© Kawamoto Seiya)

Under the guidance of Inuma Haruko, the lecturer in charge of coloring, a statue of a richly colored and resplendent divine general from the Western Regions of China has come into being, thanks to the Japanese staff’s and overseas students’ efforts. The team members joined their skills to create this statue. In this project, they experienced what it might have been like to work in an international Buddhist statue workshop 1,300 years ago in Heijō-kyō, today’s Nara, Japan’s capital from 710 to 784. The statue will be stored at Nara’s Tōdaiji from the spring of 2021.

Exhibition in Commemoration of the Retirement of Yabuuchi Satoshi: “What I Wanted to Pass On—Activities of the Conservation Course Sculpture Laboratory, 2004–2020.”

Aside from the Shukongōshin, select Buddhist statues and works by Professor Yabuuchi will also be exhibited. The Shukongōshin will be consecrated at Nara’s Tōdaiji in March 2021, and the general public will be able to view the statue there. 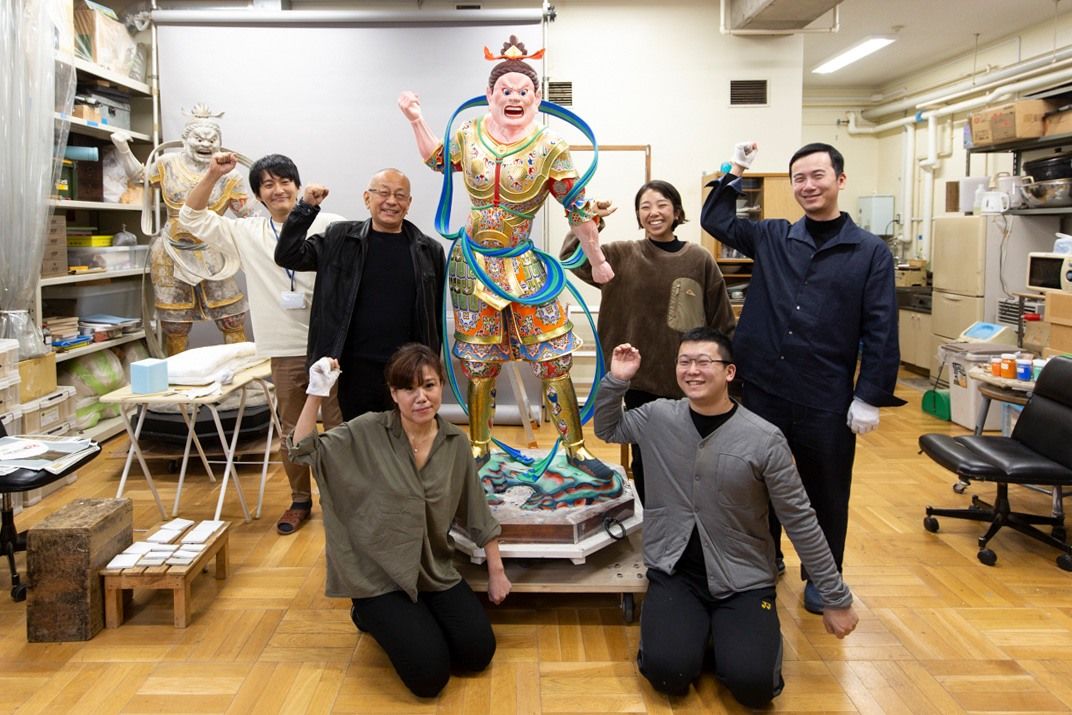