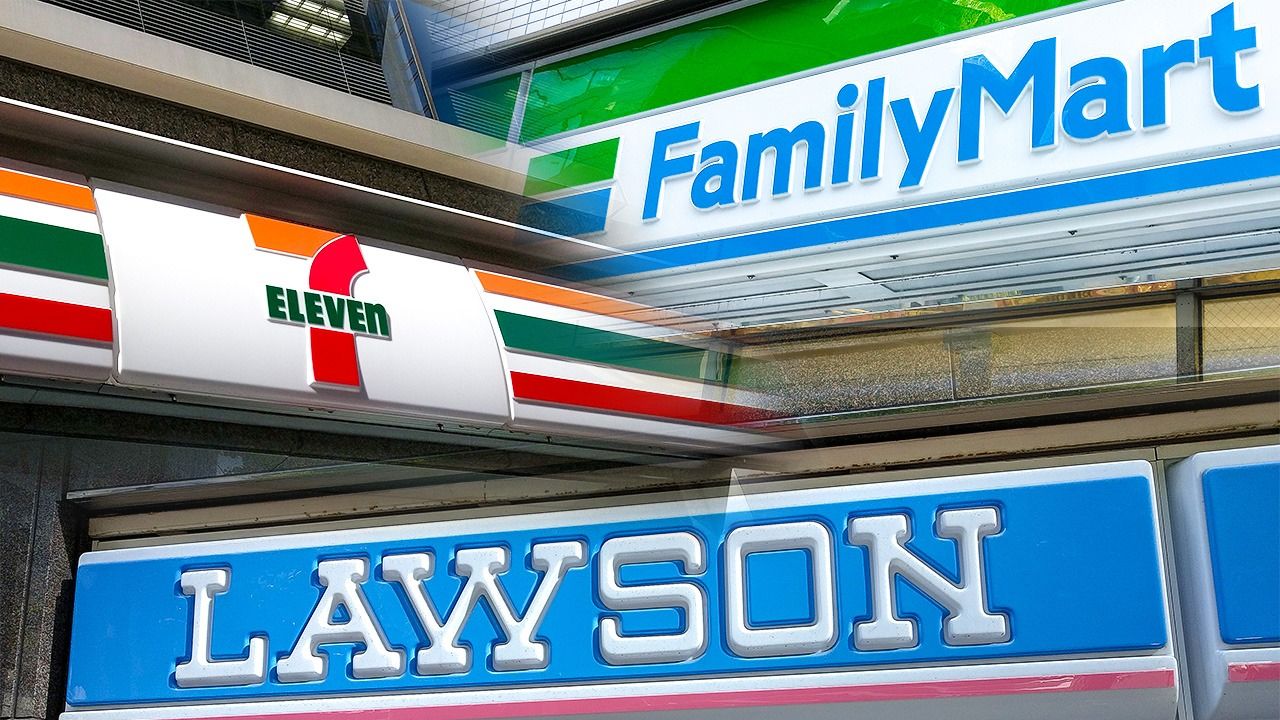 Economy Society Dec 16, 2020
Convenience stores have spread to every corner of Japan, saturating a market already in decline due to the nation’s aging population. As the downward trend continues, the convenience store industry is headed toward a battle for survival. How are the three market leaders, Seven-Eleven, FamilyMart, and Lawson, trying to maintain, and even expand, their sales?

Convenience store sales numbers for the first two quarters of 2020 were not a surprise, given the economic effects of the COVID-19 pandemic, but they were still shocking to see. Compared to the same period the year before, each of the big three operators saw dramatic drops: Seven-Eleven was down 3.4%, FamilyMart 10.5%, and Lawson 9.2% In addition, the combined operating income of the three companies dropped 25% from last year, to ¥153.2 billion.

In absolute terms, there is no denying that all three companies are still quite large. Seven-Eleven had total branch sales equaling ¥2.45 trillion, FamilyMart ¥1.35 trillion, and Lawson ¥1.09 trillion. All three companies have seen a rise in income per customer from the pandemic-driven increase in nesting demand—the focus on home-centered consumption. However, overall customer numbers are down more than the increased income can cover, and convenience stores have been hit particularly hard because a large part of their business has been connected to office consumption.

These problems were brought to a head by the pandemic, but they can be understood as a manifestation of existing problems the companies have already been facing. These problems are now bringing the convenience store market to a turning point.

There are now three basic issues facing the convenience store industry. First is a perennial labor shortage, which is triggering the second issue, the increasing difficulty they have in operating 24 hours a day—a practice also facing opposition from the Japan Fair Trade Commission and popular sentiment. Third is market saturation exacerbated by Japan’s aging and shrinking population.

The first issue, the labor shortage, is seeing some relief with the rush of job seekers due to COVID-19’s economic ravages. Stores are also more actively seeking university students and elderly workers. However, regarding the second issue, around-the-clock operations,, the JFTC has stated that forcing franchise holders to operate 24 hours a day is a violation of antitrust laws, and so change is almost inevitable. Of course, this second issue is not merely a labor issue, it is also connected to the third problem, the saturation of the market. Basically, from the owners’ perspectives, convenience stores are not as profitable as they once were.

Convenience stores have been a part of our lives for half a century now. The conversion of the neighborhood liquor shop into a convenience store was undoubtedly the catalyst for their breakthrough. Convenience stores were also reassessed as vital parts of societal infrastructure since they served as accessible supply points for basic necessities after the Great East Japan Earthquake of 2011. However, Japan now has a little over 60,000 convenience stores. The market has become completely saturated, with the annual number of stores going bankrupt doubling in the last five years, while average yearly income per franchise has fallen by around ¥2 million.

Those franchises are all run by private owners, in business relationships with head offices that have remained at arm’s length. However, there are two specific problems with convenience store management in Japan that come down to this individual owner system.

The first is the problem in finding a successor. Most convenience stores are run through contract with an individual franchisee, and they often cannot find a replacement when it comes time for the individual to retire, a problem worsened by contract stipulations as to who can take on the franchise. FamilyMart, for one, has moved to get rid of the contractual limit on allowable successors being spouses or when a franchise is managed as a corporate entity rather than a family business. It seems clear that convenience store franchise contracts will need to be reviewed along lines like these going forward.

The second problem is the problem of reinvestment. Individual franchisees find it difficult to retain earnings and plow them back into the business, leaving them dependent on headquarters for assistance over the longer term. The United States is experiencing a shift in convenience store structure with, for example, Amazon’s opening of unstaffed, automated convenience stores, and examples are starting to appear in Japan as well. It’s hard to see how franchise owners in Japan will be able to handle the significant investment required to compete with such advances.

Despite these structural problems, though, Japan’s convenience store companies are still offering up ideas for the future.

Right now, Lawson might be the company most worth watching. It has shown huge improvements in product planning since it came under control of Mitsubishi. It has also begun a targeted discount information distribution program. Convenience stores see a lot of product and food waste. To address this, Lawson has begun targeting customers near specific branches, who are most likely to stop by after 5:00 pm, with information on discounted items approaching their sell-by times. The idea was inspired by Amazon’s Treasure Truck promotion, which features a truck carrying highly discounted items that visits a particular area and sends notices to nearby members to buy on the spot. Lawson combines shop data with the locations of potential customers to create specific, targeted updates.

Now, to shift the conversation a bit, what do you think the top-selling product was when Seven-Eleven opened its first shop in Japan? Sunglasses! This demonstrated how the most unexpected item can unlock sales, and that spark is what lit the fuse for the huge diversification in convenience store product lineups. The companies rely on a standard shop format, order goods in mass quantities, and distribute them to branches across the country.

Thus, in one sense, the goal has been to create a product lineup that is uniform all across Japan. However, there is now pressure to offer local specialization in regional markets. Of course, a little reflection will show that the same products do not sell in an office building as in a residential neighborhood, and a hit in Hokkaidō may not be one in Kyūshū. In response, Lawson has begun a program of “microlocalization,” offering fresh produce procured directly from local farmers in hopes of broadening appeal by becoming a more locally rooted convenience store.

And what of core business? Seven-Eleven is taking the pandemic-driven nesting demand head on. Residential neighborhood branches of all three leading convenience store operators have increased their alcohol lineups and also boosted frozen food stocks. As demand for dining out goes into decline, they see an opening for increased snack and home-dining sales. Frozen dishes that can serve as both a light meal or a snack with drinks, like shūmai dumplings or gyōza pot stickers, are selling briskly.

Where Seven-Eleven differs is its focus on the “last mile” of distribution. The chain has introduced convenience store ordering via smartphone, with the shop handing the ordered goods over to a delivery service to go directly to customers. This combines the traditional strength of convenience store shopping, namely proximity to where people live, with the speed and convenience of online shopping. The chain looks to make deliveries in as little as 30 minutes.

The company appears to be getting this service up and running in Japan before rolling it out worldwide. This is another example of how convenience stores, originally an import from the United States, have been refined in Japan. Unlike the geographically vast US market, where stores must settle to a greater extent for a set product range, the more compact Japanese market has developed diverse, pinpointed demand for specific items in much smaller areas. This has propelled the development of point of sale systems integrated with complex inventory controls, as efficiency has been pushed to the limits. The result has been the Japan’s convenience stores outpacing those abroad. Now Seven-Eleven (originally an American import, but now a Japanese-owned operator) has acquired the third largest US convenience store chain, Speedway, at a cost of ¥2 trillion. While the domestic market may be saturated, there is still room to expand overseas.

FamilyMart recently received a takeover bid from Itōchū Holdings, and the acquisition was completed in August 2020. The firm is now under the control of a major holding company that can bring considerable strength to bear in competition. It has now been working with affiliated companies quickly roll out artificial intelligence applications. FamilyMart will provide purchase history data for analysis, and there are plans to use the results for ad personalization.

The company also insists that it is focusing on more than just sales numbers, and will continue to pursue quality improvements. Personally, as a shopper with both a FamilyMart and a Seven-Eleven near my home who makes frequent visits to both, I have found that Seven-Eleven has pulled far ahead of FamilyMart, especially in terms of meal-oriented food. Improving its performance in this area has likely become an imperative for FamilyMart, since it has been so public about its focus there.

FamilyMart is also engaged in stronger community market integration, just as Lawson is doing. There are many of elements to success, including overall product assortment, that simply cannot be grasped without strong hooks in the community. FamilyMart will be giving local shops the authority to implement measures that make themselves more appealing to the community.

What’s Next for Convenience Stores?

The move toward unstaffed convenience stores is gaining traction in Japan, but there are some barriers. For example, the main profit areas for convenience stores, tobacco and alcohol, cannot be sold in Japan without a clerk present to ensure customers are of legal age. However, this problem is likely to be solved technologically, through advances in ID data management, facial recognition, and so on. Of course, not everything can be automated, only the most basic sales of goods. I cannot imagine all of the roles served by Japan’s local convenience stores ever being wholly automated.

Every time I journey abroad, I am further impressed at the incredibly quality of Japan’s convenience stores. If you include all the various services they offer, like collecting utility bill payments and such, a convenience store clerk has one or two hundred jobs. I feel that the real role of convenience stores in Japan is to serve as a proxy for all of life’s more onerous jobs, and that cannot be done by machines.

Now, for my closing argument, I shall dare to go a little abstract and recommend that, if Japan’s convenience stores want to remain viable, they should follow that one step further to become “shops that handle all the hassle.” For a place that can serve you from cradle to grave, or rather from batteries to life insurance, it seems a waste not to capitalize on that strength.