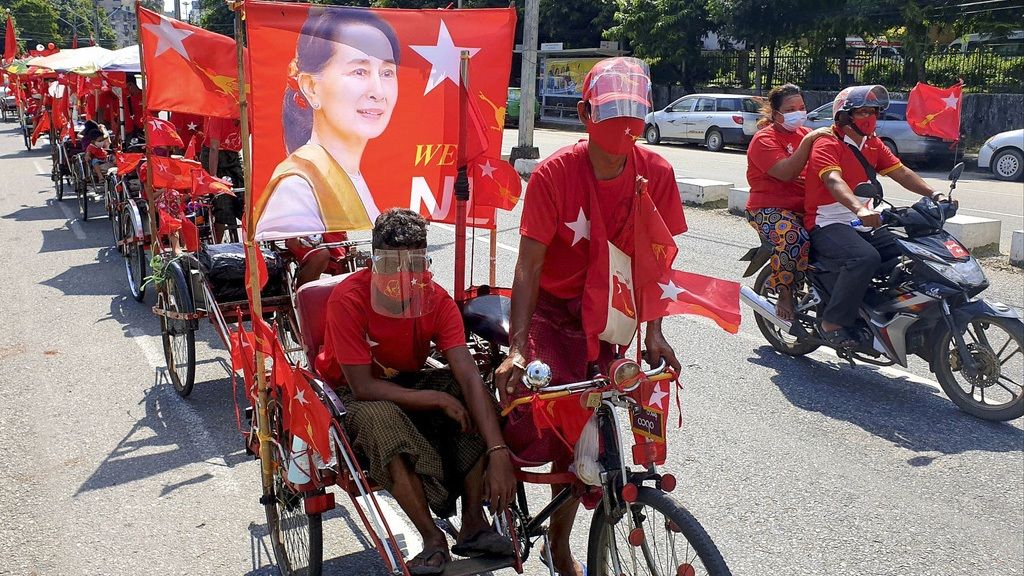 Politics Jan 28, 2021
Although Aung San Suu Kyi’s ruling party surprised the world with another landslide victory last November, pointed warnings from the military are a reminder that Suu Kyi must continue to toe the line under the 2008 Constitution.

Myanmar’s latest general election, held on November 8, 2020, ended in a sweeping victory for Aung San Suu Kyi’s ruling National League for Democracy, which won more than 80% of the democratically contested seats. This gives the NLD a commanding majority in the Assembly of the Union, even after one factors in the seats (25% of the total) set aside for appointed representatives of the military.

In March 2021, barring any extraordinary developments, the NLD will form its second democratically elected government under the de facto leadership of Aung San Suu Kyi. But rumblings from the still-powerful military establishment are a disturbing reminder of the fragility of Myanmar’s democracy under the 2008 Constitution.

The NLD was expected to outperform the opposition, but few anticipated a victory eclipsing the landslide of 2015, which had given the party control of Myanmar’s first democratically elected government in over 50 years. Economic growth has been slowing, and the NLD has failed to deliver on two of its key 2015 pledges: to end the armed conflict with Myanmar’s ethnic minorities and to reform the 2008 Constitution. With those failures in mind, many expected the smaller ethnic-minority parties to make significant headway against the NLD, particularly in the seven states, where minorities predominate. How did the ruling party score such an impressive victory?

The NLD’s biggest asset is unquestionably the enduring popularity of its leader, former pro-democracy activist Aung San Suu Kyi. In a pre-election survey conducted in early August 2020 by the independent election-monitoring group People’s Alliance for Credible Elections (PACE), respondents were asked about their trust in various institutions, including public officials, local and national assemblies, political parties, religious leaders, the military, armed ethnic groups, and the courts. The largest number by far expressed trust in the state counsellor, Aung San Suu Kyi. This was true not only in the regions, where the ethnic Bamar majority predominates, but also in the minority-dominated states. To be sure, trust was higher in the regions, by a margin of 84% to 60%, but voters in both types of constituency were far more likely to put their trust Suu Kyi than in the political parties (supported by 41% in the regions and 31% in the states) or armed ethnic groups (19% and 29%, respectively).

Still, Suu Kyi’s personal popularity alone is not sufficient to explain the NLD’s gains, which eclipsed even its 2015 performance. After all, public support for Suu Kyi was more enthusiastic back in 2015, when she embodied the people’s long-deferred dream of freedom and democracy.

A Vote for Higher Living Standards

As I see it, the ruling NLD’s strong performance is largely attributable to the modest but steady rise in living standards, particularly in Myanmar’s rural areas. Although economic growth is said to have slowed in recent years, the slump was mainly a consequence of the collapse of the urban real estate bubble, the impact of which has been negligible outside of Yangon and Mandalay. Similarly, the decline in foreign direct investment, which has been cited as proof of a slowdown, has made little or no difference to the nation’s rural areas, since foreign firms were not investing there to start with. While experts may put stock in gross domestic product and the testimony of Yangon business executives, the vast majority of Myanmar’s voters judge the economy by their own living standards as compared with their situation under the military junta.

Access to electricity has risen substantially under the NLD. Even in the countryside, where most people used to rely on car batteries to run their appliances, electrification has reached about 55% (up from around 40%), with off-grid electrification accounting for much of the increase. Cell phones and motorcycles, once practically nonexistent in rural Myanmar, are now within reach for many. Under the junta, farmers in minority villages lived in constant fear of having their land confiscated. Nowadays, they are eager to register their farmland with the government in order to qualify for low-interest farm operating loans from the Agricultural Development Bank.

In the above-mentioned 2020 PACE survey, 56% of respondents indicated that the situation in their own township was headed in the right direction, up from 44% in 2019. (Only 9% said it was headed in the wrong direction.) The figure in the states was 53%, just 4 points lower than in the regions. The reason most respondents gave was improvements in government services, chosen by 58%. Next came economy and income, followed by infrastructure development. By contrast, only 6% pointed to progress toward federalism, a prominent election issue. (Similarly, only 9% chose lack of federalism as a reason for claiming things were going in the wrong direction.)

To the majority of citizens, in short, bread-and-butter issues proved far more decisive than political footballs like federalism. While the ethnic-minority states still lag behind the rest of the country economically, they have made gradual progress under Aung San Suu Kyi. It stands to reason that the average voters in those states would cast their votes for a sure winner with a decent economic track record instead of an ethnic-minority party with no experience or hope of governing.

The Long Shadow of the Military

Casting a shadow over the NLD’s triumph is the presence of the almost undiminished power of the military.

In 1990, the military junta, under pressure from the international community as well as domestic pro-democracy forces led by Aung San Suu Kyi, held the nation’s first multiparty election in 30 years. But the Tatmadaw, or armed forces, refused to recognize the NLD’s victory in that election. When it did finally transfer power to the NLD, in 2016, it did so under the terms of the 2008 Constitution, which guarantees the Tatmadaw autonomy, control over the nation’s entire security apparatus, and 25% of the seats in each house of parliament—enough to block any constitutional change. As a result, even today it is only the military’s consent that ensures a peaceful transition to a new government based on election results.

On the day of the November 2020 general election, the commander-in-chief of the Defence Services, General Min Aung Hlaing, offered his assurances that the military would accept the outcome of the vote. However, as soon as the results became clear, the Union Solidarity and Development Party, backed by the Tatmadaw, rejected the results, alleging massive fraud, and called on the government to hold fresh elections—this time in cooperation with the military. The military responded by opening an inquiry into election regularities and issuing ominous warnings. Early in December, the commander-in-chief stated that the election would not represent the will of the people if it was found to be fraudulent. He also stressed the military’s ongoing role in the governance of the nation regardless of the outcome.(*1)

The basic problem confronting the Tatmadaw is the fact that USDP has now demonstrated its weakness in two consecutive elections (much as the military-backed National Unity Party did in 1990). With the NLD’s latest win, the Tatmadaw must realize that the USDP (like the NUP before it) is all but useless as an instrument of political power.

The Paradox of the 2008 Constitution

Fortunately for the Tatmadaw, it still has the 2008 Constitution, which gives it the right to independently administer and adjudicate all affairs of the armed forces and guarantees it a significant role in governance at the national level.

The Tatmadow justifies its involvement in civilian government on the grounds that it represents the collective interests of the Union of Myanmar and can guarantee national leadership and unity in the event that party politics should descend into division and chaos. It sees itself as the personification of Burmese nationalism, with a pedigree extending back to the independence movement. Few of Myanmar’s voters share this view of the military, but the 2008 Constitution supports it, and the Tatmadaw has the power to block constitutional reform. It is unlikely to give up that power voluntarily.

Indeed, the Tatmadow desperately needs the guarantees of the 2008 Constitution, not just to maintain its political power but also to protect its economic interests and avoid accountability for the crimes and abuses of the past. It was the absence of such guarantees and protections that kept the military from transferring power to the NLD after the 1990 election. Conversely, it was the 2008 Constitution that gave the Tatmadaw the confidence to cede nominal control in 2016.

But that 2008 Constitution is a constant thorn in the side of Aung San Suu Kyi. When Suu Kyi was elected to the Assembly of the Union in the 2012 by-elections, she initially refused to take the oath to uphold the 2008 Constitution. Uncharacteristically, the public disapproved of that act of defiance, and Suu Kyi yielded to pressure and took the oath. That was the moment when Aung San Suu Kyi and her NLD became participants in the political establishment under the 2008 Constitution. But Suu Kyi has never abandoned her commitment to constitutional reform.

Five years ago, Aung San Suu Kyi led the NLD to a historic electoral victory under the slogan “time for change.” Yet many of the government’s basic policies remain unchanged from those pursued by President Thein Sein, a retired general who headed the USDP. Although the NLD campaigned on pledges of ethnic reconciliation and constitutional reform, its supporters today seem willing to overlook such unfulfilled promises in return for economic gains. The irony is that Suu Kyi’s failure to achieve constitutional reform is the main reason the military is ultimately expected to support the installation of the new NLD government in 2021. After all, the 2008 Constitution guarantees the Tatmadaw an active role in government regardless of the election results.

The NLD’s latest triumph is likely to strengthen Suu Kyi’s resolve to pursue constitutional reform, even as the Tatmadaw—stung by the USDP’s failure—clings ever more fiercely to the constitution that protects its privilege and autonomy. This latent conflict has the potential to destabilize Myanmar’s fragile democracy. Recent rumblings from General Min Aung Hlaing are doubtless intended as a warning against any such confrontation.

Many were disappointed by the policies pursued under Aung San Suu Kyi, and many were surprised by the outcome of the November election. (The NLD and Suu Kyi may have been surprised themselves.) But the general election has given some clarity to the will of the people. What they want is for Suu Kyi and the NLD to continue pursuing incremental, moderate reforms geared to improving the people’s lives without provoking any destabilizing confrontation with the Tatmadaw. The people want both freedom and affluence, and they refuse to choose one at the expense of the other. Only through cooperation and a certain degree of compromise between Suu Kyi and the military can those hopes be realized.