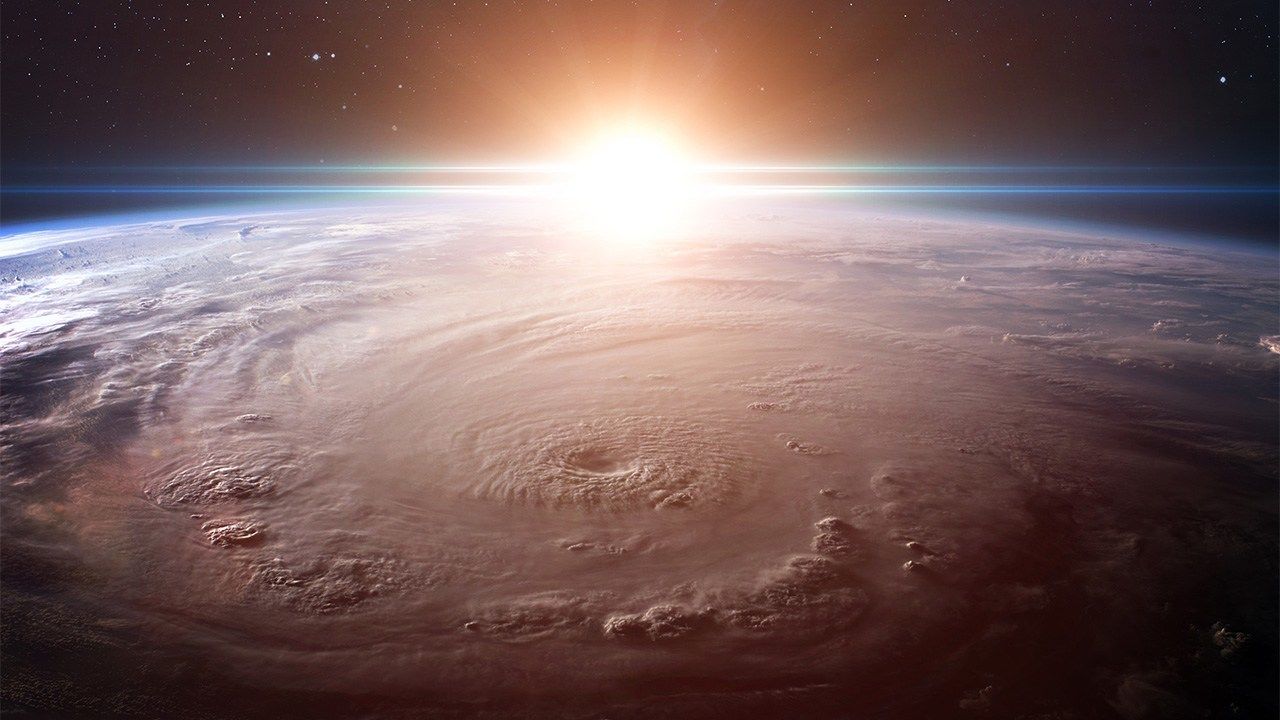 Science Politics Apr 12, 2021
Much of the success of the asteroid probe Hayabusa2 was due to the Chiba Institute of Technology’s Planetary Exploration Research Center, which developed its measurement and observation instruments. Matsui Takafumi, who headed PERC for 11 years, is also the acting chair of the Committee on National Space Policy under the Cabinet Office. This authority on planetology talks about Japan’s future in space exploration. 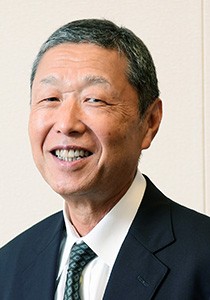 President, Chiba Institute of Technology, and professor emeritus at the University of Tokyo. Born in 1946 in Shizuoka Prefecture. Acquired his PhD and taught at the University of Tokyo prior to taking on his current position. Specializes in comparative planetology and astrobiology. Has served on Japanese government commissions and councils and is an active member of international academic societies. Author of books including Chikyū shisutemu no hōkai (Collapse of the Earth System), which received the 2007 Mainichi Publishing Culture Award, and more recently 138 oku nen no jinsei ron (13.8 Billion Years of Life Theory) and Seimei wa doko kara kita no ka? Astrobiology nyūmon (Where Does Life come From? An Introduction to Astrobiology).

INTERVIEWER  Japan’s Fourth Basic Plan for Space Policy over the next decade was announced in the summer of 2020. What direction will Japan be taking in its space activities?

MATSUI TAKAFUMI  I have been involved in Japan’s space policy since before the current Committee on National Space Policy took shape. This committee was formed under the auspices of the Cabinet Office after the 2012 abolishment of the Space Activities Commission in the Ministry of Education, Culture, Sports, Science, and Technology.

Initially, Japan’s space policy was focused on research and development under the Education Ministry. Not enough attention was being paid to security issues or space utilization, though, and the budget was limited. This discouraged many small businesses from participating in the program and there was a real fear that Japan would lose the capability to build its own rockets to launch satellites into space.

We worked to overhaul the system by articulating a new vision and establishing three pillars of Japan’s space policy. First, we acknowledged that space is at the forefront of national security. Second, as the Quasi-Zenith Satellite System for precise and stable positioning services demonstrates, it is time we use space for practical purposes. And third, we must maintain our R&D capabilities as we continue to focus on science.

Space policy requires planning twenty or thirty years ahead, setting specific goals over ten-year spans. And yet there has been little evidence of this kind of long-term vision in Japan’s government policies. We were not allowed to exceed our 350 billion yen budget and this made it difficult to foresee the future. In an effort to remedy this situation, we submitted a draft budget for fiscal 2021 of about 550 billion yen, securing in the end a budget of around 450 billion yen.

INTERVIEWER  The Basic Plan for Space Policy includes 35 satellite and exploration projects. Of these, which do you perceive as the most critical in implementing the 10-year policy goals?

MATSUI  The most important in terms of national security and diplomacy is Japan’s participation in NASA’s Artemis Program to land people on the moon by 2024 and to start construction of a lunar base camp by 2028. At the moment, our reach only goes so far as low earth orbit, but Japan and the United States agree that it is in our national security interests to extend our activities to a lunar orbit and this is why Japan has joined the program. Someday, a Japanese astronaut may land on the moon as an outcome of the Artemis Program, marking a major shift in Japan’s space policy.

INTERVIEWER  What are some of the other important projects besides the Artemis Program?

MATSUI  Actually, Japan’s space policy is attracting worldwide attention, but not because of our participation in the Artemis Program or our development of the Quasi-Zenith Satellite System and the H3 rocket. These are all initiatives that other countries are undertaking as well. What distinguishes Japan’s space policy is our focus on scientific probes. Few other countries send probes into space to collect scientific information, and Japan is at the forefront of the field. It’s important for us to hone our edge in this particular area of space exploration.

Unfortunately, Japan has only about one-tenth of NASA’s budget, which means we must take care to act strategically. Hence our current focus on sample returns, a strategy to collect space samples that requires a sophisticated technology, but also offers immeasurable benefits.

INTERVIEWER  You’re referring to Hayabusa2. JAXA is preparing additional missions, MMX and DESTINY+. Could you tell us something about the objectives of these two missions?

MATSUI  The MMX, or Martian Moons Exploration, mission will bring back samples from Phobos, one of the two moons of Mars. A follow-up to the Hayabusa and Hayabusa2 missions, this will be the first sample return mission of the Mars atmosphere. JAXA is aiming to launch in 2024 and return in 2029. This first-ever sample from the Mars orbit may even shed light on the origins of life in the universe.

DESTINY+, the Demonstration and Experiment of Space Technology for Interplanetary Voyage with Phaethon Flyby and Dust Science, also scheduled for launching in 2024, is a mission to get as close as possible to the orbit of the near-earth asteroid Phaethon and measure interplanetary and interstellar dust in the process. Phaethon measures nearly 6 kilometers in diameter, making it the largest asteroid that could potentially collide with Earth. It is believed that an asteroid that broke up 4,600 years ago split into two smaller asteroids—2005UD, which is about 1 kilometer in diameter, and Phaeton. The cloud of dust resulting from this split is the Geminids meteor shower, but how this dust is released from Phaeton remains a mystery, and we hope the DESTINY+ mission will find an answer.

INTERVIEWER  The Planetary Exploration Research Center at the Chiba Institute of Technology was deeply involved in the development of the observation instruments for Hayabusa2 and in the data analyses that were made later. Will PERC also be involved in the MMX and DESTINY+ missions?

MATSUI  Yes, we will, particularly in the DESTINY+ mission, as demonstrated by the inclusion of the Chiba Institute of Technology and Institute of Space and Astronautical Science on the mission decal. PERC will lead the development of three of the measurement instruments that will be used in the DESTINY+ mission and is also in charge of general scientific oversight for the project.

The amazing thing about this mission is the development of new technology that will allow us to approach Phaeton to about a distance of 500 kilometers as it speeds by at more than 33 kilometers per second. We’ll be capturing images of its surface with telephoto and spectroscopic cameras while at the same time analyzing the chemical composition of the dust surrounding the asteroid. 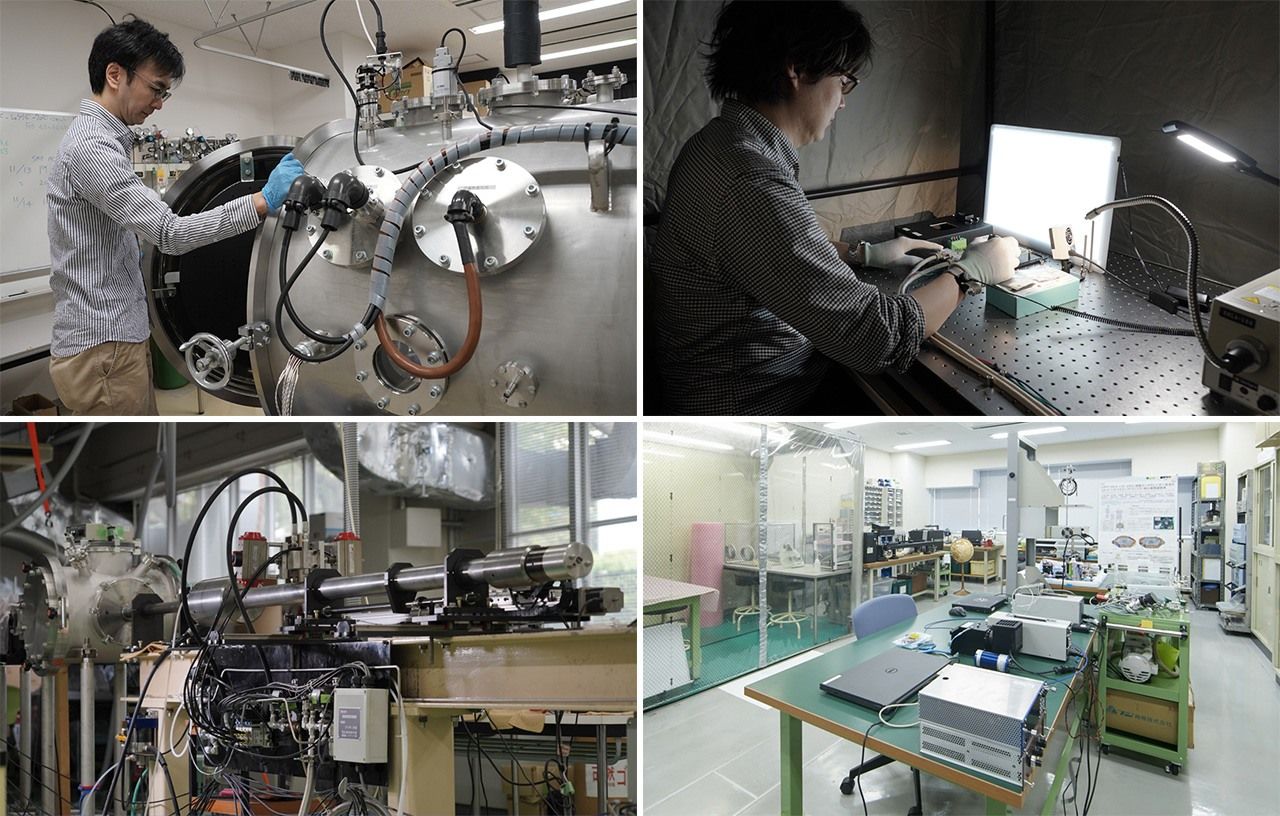 A look at the PERC facilities. Top left: The Mars environment simulation chamber can simulate aspects of the Martian atmosphere such as temperature (down to –120°C), pressure (approximately 1/100 atm), and chemical composition (primarily carbon dioxide), and is used to test the measuring instruments for the Mars mission. Top right: the camera laboratory for planetary exploration. Bottom right: the planetary exploration technology development room is equipped with measurement and testing instruments used to develop spacecraft instruments and devices. It is also where basic experiments and calibration tests can be conducted, and flight modules assembled. Bottom left: the hypervelocity impact experiments room. Here a projectile launcher is used to reproduce and measure the various phenomena related to hypervelocity collisions that have impacted the Earth over its history. (Courtesy of PERC, Chiba Institute of Technology)

INTERVIEWER  You worked in the fields of geophysics and astrobiology at the University of Tokyo before moving to the Chiba Institute of Technology in 2009 to become director of the newly established Planetary Exploration Research Center. In the ten years since then, PERC has become an indispensable part of Japan’s planetary exploration.

MATSUI  The Chiba Institute of Technology asked me to head its new research center when I retired from the University of Tokyo. I envisioned the new center not as a graduate school, but as an institution that would nurture postdocs into world-class researchers. We decided to specialize in planetary exploration, which can be done on a private university budget, and targeted small bodies of astrobiological interest, like asteroids and comets.

Our center works exclusively on developing instruments to be mounted on spacecraft. Normally this kind of work would be done by the government, but the government relies on us to provide resources it does not have.

We have many other projects besides those related to planetary exploration. One is the Red Rain Project, a search for the origins of life in the cellular material found in red rain, a phenomenon occurring in India and Sri Lanka, among other places. Another is the Biopause Project, using large balloons to retrieve microbes entering and leaving the Earth’s biosphere, the upper boundary of where living organisms exist.

INTERVIEWER  You say that after space, your next area of research is to explore the origins of the Iron Age. Why did you decide to focus on this era?

We know from archeological excavations in Turkey that the oldest manmade iron spheres were being produced 4,300 years ago. We also know that around the same time swords were being forged from retrieved meteorites. In other words, humanity’s first metals were made from meteoritic iron. If we study how this process evolved, we should be able to find out how the Iron Age began and what the effect was on human civilization.

INTERVIEWER  Civilization considered in terms of the universe takes us to the origins of life. Was that your objective in establishing the Planetary Exploration Research Center in 2019?

MATSUI  Since my June 2020 appointment as CIT president, I have worked to continue our research related to planetary exploration while actively incorporating the outcomes of this research in our educational programs.

A university must be a place that gives birth to a flow of knowledge. In a technology institute such as ours, “knowledge” refers among other things to the designing of a future civilization. Technological innovation first takes on significance when it occurs within the framework of a vision of what society, and what humanity, should be.

Unfortunately, in Japan, the overwhelming majority of researchers tend to passively wait for projects that the government will fund. At CIT, we provide startup funds for those who come up with interesting ideas. We hope in this way to foster spirited researchers and engineers with a practical focus who will actively contribute to our “flow of knowledge.”