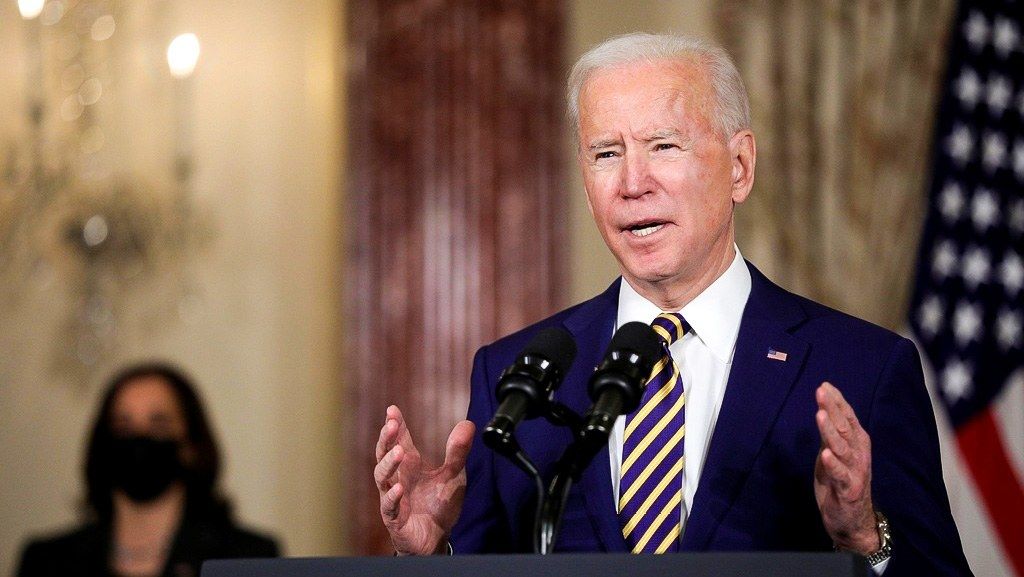 Environment Politics Economy Mar 24, 2021
Allies have welcomed US President Joe Biden’s pledge to reset frayed multilateral ties even as he signals it will not be a return to business as usual. With climate policy set to take center stage in the US-China battle for hegemony, the Biden administration is looking to establish new cooperative frameworks to reach its decarbonization goals.

Since his inauguration as US President on January 20, Joe Biden has wasted little time in enacting his agenda in a bid to restore what he calls “American leadership.” This includes taking the lead in tackling global warming by advancing bold climate policies. However, faced with China’s growing influence, Biden has signaled his intention to forego traditional foreign policy approaches in favor of building new frameworks of cooperation with Japan and other allies.

One of Biden’s first acts as president was to rejoin the Paris Agreement on fighting climate change, which calls on countries to commit to reducing CO2 and other greenhouse gas emissions. The move, a reversal of predecessor Donald Trump’s 2017 decision to pull out of the accord, is core to the president’s aim of achieving net-zero emissions by 2050.

The Biden administration has unveiled its climate plan, dubbed the “Green New Deal,” that aims to decarbonize the US economy. It provides $2 trillion in infrastructure spending over the next four years and puts $400 billion toward investments in clean energy research and innovation in the coming decade, with 10 million new jobs expected to be created in the clean-energy sector. Showing a willingness to lead on climate, Biden has also proposed measures like imposing a carbon border tax on certain imports to place pressure on countries that are falling behind on their reduction commitments.

Biden has tapped a number of well-known climate hawks to help him realize his environmental plan, including former Secretary of State John Kerry, who joins the administration as special presidential envoy for climate on the National Security Council. The president is also looking to bolster international cooperation in addressing global warming, particularly among top greenhouse-gas-emitting countries. China and Japan are expected to be in attendance when Biden hosts world leaders at a climate summit on April 22, an event that aims to start the ball rolling on establishing a framework for reducing emissions and addressing climate change ahead of the November COP 26 meeting in Britain.

Alongside domestic goals of creating job growth and rebuilding the manufacturing sector, the Biden administration’s climate plan aims to curtail China’s influence by forcing it to work multilaterally. Biden expressed his ideas in a 2020 Foreign Affairs piece titled “Why America Must Lead Again,” in which he stated that the shared interest in addressing climate change offers the United States a chance to cooperate with Beijing even as it confronts China on other issues.

Biden firmly asserted in the article that the United States needs to lead the charge in innovation, declaring that there is “no reason” why America should be trailing China in areas like clean energy, quantum computing, artificial intelligence, or 5G technology. He also called out Beijing for its support of “dirty” energy projects like subsidizing coal exports through its Belt and Road Initiative.

Chinese President Xi Jinping, recognizing his country’s role as the world’s largest emitter of greenhouse gases, announced last September that China aims to be carbon neutral by 2060. China is already investing heavily in research and development of cutting edge technologies in the fields of power generation and electric vehicles, a strategy it is betting will extend its global influence.

The diplomatic take in Japan on the US goal to decarbonize is that the Biden administration is looking to partner with EU allies to shape climate rules and standards in a bid to head off China’s growing global sway. The implications of a rejuvenated US-EU alliance have not been lost on leaders in Beijing. In what was largely seen as a swipe at Washington, Xi, speaking at the January World Economic Forum in Davos, spoke out against starting a “new Cold War,” warning that threatening and intimidating other countries would “push the world into division and even confrontation.”

Japan may find itself caught in the middle as the United States pivots to clean energy, a move that presents challenges beyond the potential for diplomatic friction with China. The meltdown at Fukushima Daiichi forced Japan’s nuclear generation capacity offline, and a decade later only a handful of reactors have restarted. In order to meet power demands, utilities have had to rely on fossil fuels, with thermal power plants running on coal and natural gas now generating 85.5% of the country’s electricity. If Japan comes under pressure to follow the United States and EU on climate issues, it will have to revamp its industrial structure to meet the stricter standards even as it faces limited options for generating clean power.

A desire to avoid such a scenario has kept Japanese leaders from committing to slashing emissions. This changed on October 26, 2020, when Prime Minister Suga Yoshihide officially set the goal of reaching net-zero emissions by 2050. Once the presidential contest was decided, Suga in December unveiled Japan’s “green growth strategy” outlining state support in 14 areas, including replacing gasoline-powered cars with electric vehicles and developing offshore wind farms. In the end, this came across as merely a Japanese response to a new international norm brought about by the emergence of the new US administration. The timing of the announcement, coming mere days ahead of the US presidential election, suggests that Suga was hedging his bet in favor of Biden, who campaigned heavily on green policies, winning, but wanted to be certain before committing to decarbonizing. As an official at the Ministry of Economics, Trade, and Industry noted, the prime minister appeared to be holding off on the net-zero pledge for as long as possible.

Japanese utility executives are warily watching as the Biden administration hashes out the details of its clean energy policies. Criticism by US climate envoy John Kerry and others of countries that continue to fund new coal-fired power plants and subsidize existing facilities has generated unease in Japan’s energy sector, as utilities recognize that they cannot remain dependent on fossil fuels and expect to stay out of the line of fire.

A face-to-face summit between Suga and Biden will be critical in determining Japan’s relationship with the United States going forward. The two leaders in a phone call in late January 2021 confirmed their commitment to meet in person at Biden’s climate summit on April 22 and vowed to work together to bring the COVID-19 pandemic under control. According to a Foreign Ministry official, talks between the two leaders will focus on reaching an agreement on Japan’s contribution to global warming countermeasures, including the amount of Japanese investment and technical cooperation.

A government official told me that in addition to a Suga-Biden summit, Japan will push to hold the first Trilateral Meeting of Trade Ministers at the World Economic Forum in Singapore in the summer. The meetings were initiated in December 2017 under the Trump administration, with Japan mediating the often contentious US-EU relationship. Up to now, they have served as a forum to urge other countries, particularly China, to protect intellectual property rights and adopt transparent trade measures. But according to a senior METI official, the Biden administration will expand the focus to include cooperation on climate policy, especially with regard to measures adopted by China.

Suga will be looking to shield Japanese industry, which has been slow to adapt to the growing emphasis on tackling global warming. While Japan has emerged as a leader in research and development of electric-vehicle batteries and energy-efficient manufacturing equipment, the production and uptake of Japanese EVs has lagged noticeably. If China, the United States, and Europe kick their transition to clean energy into high gear, EVs can be expected to play a core role in managing emissions and shifting to renewables. This would deal a heavy blow to the Japanese carmakers, which up to now have focused heavily on developing hybrid vehicles.

China’s state-controlled industries are making great strides with EVs and other green technologies, but a Japanese government official I spoke with called the idea of Japan resorting to the Chinese model to make up lost ground as “unthinkable.” The official conceded, however, that as things stand now, Japan has little chance of bringing its emissions in line with the EU’s strict standards, given the inflexibility of its current power mix. This creates a serious conundrum for the Suga administration. To keep from being left behind on climate, it must clearly communicate Japan’s position to the Biden administration, which tends to lean toward the EU, and actively seek cooperation in forging policies and goals.

Japan will also be watching to see the degree to which Biden changes tack on trade. America’s insular tone of the last four years has made many in the United States skeptical of multilateral free trade agreements, and the Biden White House has its work cut out in reversing this trend. Failure to shift the tide would bode poorly for Japan, which sees liberalizing trade as vital to its economic future.

So far, Biden has not signaled that he is ready to get down to business on trade. Several top Foreign Ministry officials have expressed Tokyo’s frustration at stalled phase two negotiations of a 2020 Japan-US trade agreement. Similarly, they point out that little headway has been made in getting the United States to rejoin the Trans-Pacific Partnership, which it left in 2017 under the Trump administration. Chad Bown, a senior fellow at the Peterson Institute for International Economics, argues that Biden will continue to put trade on the back burner as he focuses on more pressing domestic issues like addressing social inequalities, growing new industries, and creating jobs.

However, in the face of challenges like climate change and the global pandemic, there is growing urgency in certain circles of returning the United States to multilateralism as quickly as possible. Bown joined a group of six scholars from institutes in Japan, the United States, and Europe in penning a paper calling on allies to engage Biden and presenting the Trilateral Meeting of Trade Ministers, with its history bringing together like-minded countries, as a model for boosting cooperation.

A METI official who was involved in the first round of trilateral meetings in 2017 says they were vital in getting the United States, which at the time was beginning to raise tariff on its allies, to recognize the importance of cooperating with Japan and Europe in restraining China. For Japan, the meetings serve as a critical forum for engaging the Biden administration on a range of issues from trade to climate policy.