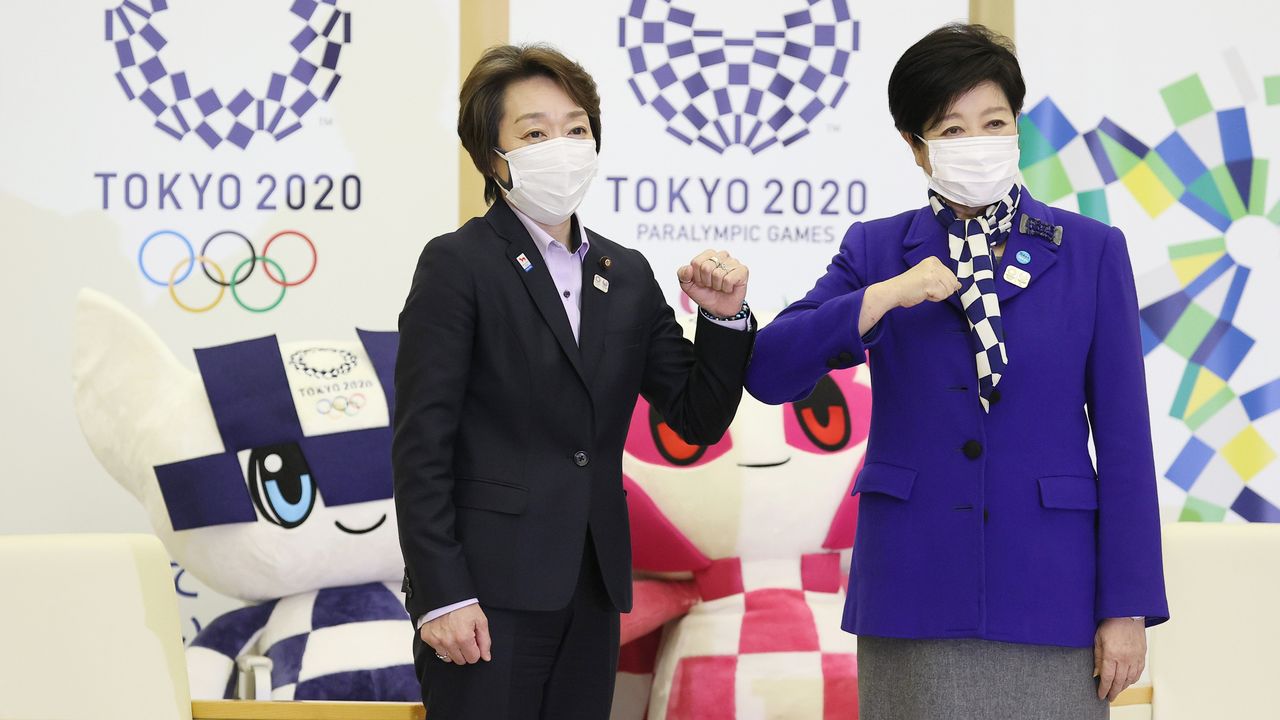 Politics Tokyo 2020 Mar 16, 2021
The 2020 Olympic and Paralympic games in Tokyo have been rocked by trouble from the start. After the COVID-19 pandemic pushed the games to 2021, Mori Yoshirō, chair of the organizing committee, left his post following misogynistic remarks. Mounting criticism at home and abroad led to his replacement by Hashimoto Seiko. A look at the tortuous road leading to the replacement.

The Olympics Are Political

One cannot discuss the games without discussing the politics saturating them. The last few weeks of Olympic confusion have made it perfectly clear just how politicized the event is.

The disarray sparked by 83-year-old former Prime Minister Mori Yoshirō’s misogynistic remarks, made while he was head of the Tokyo Organizing Committee of the Olympic and Paralympic Games, only settled once he was replaced. That happened when Hashimoto Seiko, member of the House of Councillors, announced she would resign from her role as minister of state for the Tokyo games, leave the Liberal Democratic Party, and take the job.

However, with the COVID-19 pandemic still raging there is doubt about whether the games can take place in July 2021 as planned, and that is not the only problem left. To understand the road ahead, though, we must examine the actions of Prime Minister Suga Yoshihide and his administration, as well as of Tokyo Governor Koike Yuriko.

Tension Rooted in the Katō Rebellion

Mori made the controversial remarks at a February 2, 2021, meeting of the Japanese Olympic Committee, saying that meetings with many women members took too long. There is no need to point out how out of touch with the times his comments were, or how the misogyny revealed in them runs counter to the very spirit of the Olympic games.

At a meeting of the House of Representatives Budget Committee on February 8, soon after the remarks, Prime Minister Suga admitted they also ran counter to the national interest. However, when asked whether Mori should quit or whether there were plans to appoint a successor, his tone quieted, and he took a wait-and-see stance. He said, “I will respect the decision of the Organizing Committee, which is an independent legal entity.”

Why would he take such a position? The prime minister must be aware that the Olympic Charter demands strict political neutrality, leading him to hold off on direct action. However, the cautious stance also reveals the delicate relationship between Mori and Suga.

The roots of that tension go back to November 2000, when Mori was still prime minister. A faction of the LDP led by Secretary General Katō Kōichi plotted to bring down the Mori government by agreeing to a vote of no confidence brought forward by the opposition, an act that came to be called Katō’s Rebellion.

Suga was part of Katō’s faction, and he joined the plot to bring down Mori’s cabinet. The party’s executive committee eventually quashed the movement, and Suga withdrew from the faction. However, Mori has not given up his resentment toward the Diet members who opposed him, including Suga.

Suga, of course, is aware of that, although one would assume that as the current party president and prime minister he really should not feel the need for caution toward Mori. However, even after retiring from the House of Representatives, Mori still wields significant influence in the Hosoda faction, the LDP’s largest. Prime Minister Suga, on the other hand, spent many years moving from faction to faction and is currently unaffiliated with any, leaving him without a solid base within the party.

Suga’s pandemic response has also been sluggish, and approval ratings for his cabinet are falling. With the LDP planning a leadership election in September 2021, Suga must surely be hesitant to stir up Mori’s enmity.

Despite the political resistance, though, calls for Mori’s resignation from inside and outside of Japan grew ever stronger. Mori himself decided to resign and pushed for the appointment of 84-year-old Kawabuchi Saburō, former president of the Japan Football Association and his senior at Waseda University, as his successor.

According to Kawabuchi, he began receiving phone calls the minute he got home from receiving Mori’s request. Most of the calls were from Mutō Toshirō, secretary general of the organizing committee. Kawabuchi said, “He didn’t come out and tell me to withdraw, but the implication was clear.”

It seems Suga began to panic on February 11, right after leaked news of Mori’s push for Kawabuchi began to spread in the media. It was Chief Cabinet Secretary Katō Katsunobu who informed Mutō of the prime minister’s attitude.

Kawabuchi, however, says that when Mori asked him to take over, “he explained that he already had Suga’s approval.” Mori said, “Mutō told me that Kawabuchi was a good choice.”

The truth behind all this remains unclear. However, Suga likely feared that if he appointed Kawabuchi without formal discussion by the organizing committee, the administration would be criticized for closed-door dealing after it had neglected the issue for so long.

Fear that Governor Koike Could Take the Lead

There was one more reason for the rush. Tokyo Governor Koike Yuriko announced that she would not attend the four-party meeting scheduled for April 17, which was to include Mori, administration representatives, and Tokyo officials in addition to her metropolitan government.

When asked about Mori’s derogatory remarks, Koike said, “I was personally shocked. He never should have said such a thing.” She went on: “Holding the four-party meeting now would not send a positive message. I cannot attend.”

A senior Tokyo official notes, “Koike has a keen eye for opportunity. She made the perfect comments in terms of public opinion.” The media interpreted Koike’s comments as a call to bring down Mori, and this set the stage for his resignation. Once again, it was politics and human relationships that were truly effective.

Although both Mori and Koike were in positions of responsibility in the Olympics, they have long had difficulty getting along. In fact, Koike rose to her current political power by criticizing the old LDP structures that Mori represents.

Suga dislikes Koike’s style of public performance, and has been frustrated by her conspicuous criticism of the government’s pandemic response. Suga also likely harbors suspicions that his rival may eventually return to national politics to seek the premiership.

If Koike took the lead in bringing down Mori, then Suga would have lost his chance to take part, and the initiative would pass to the governor. That is why the prime minister took a quick hand in the search for a successor. It was not long until Kawabuchi was withdrawn from consideration, but in view of critical public opinion, the decision likely came across as too late.

Government officials have said that Suga had Hashimoto in mind for successor immediately after Mori made his misogynistic remarks. Despite the lack of comment from Suga himself, newspaper and TV reporters received leaks of his intention, leading to later reports that the prime minister replaced Mori with Hashimoto to help promote gender equality.

However, the truth, as we have seen, is more complex. The end result may be positive, but Suga’s motivations were most likely his own political advantage.

Hashimoto sought election to the House of Councillors on Mori’s recommendation. She has even been heard to refer to Mori as “like a father” to her. That has led some to believe that Mori’s influence on the committee will not end with his resignation, and that Suga was aware of that when he made his pick.

With COVID-19 vaccines now being distributed, and their effectiveness confirmed, the postponed Tokyo Olympics are on track for July and the world is now focusing on them. The only way for the administration to remain in power is to boost its approval rating. That is the situation Prime Minister Suga is in, and that is also why I believe the games are almost certain to be held in July.

Looking back, it was a March 2020 private meeting between then Prime Minister Abe Shinzō and Mori that set the decision to postpone the Olympics by one year. Abe’s term as leader of the LDP was set to end in September 2021. There are suspicions that the reason Abe insisted on a one-year postponement instead of two years is that he wanted the games to occur during his tenure, and that Mori agreed out of respect for that desire. The previous Tokyo games were in 1964, and that bid was accepted when Abe’s grandfather, Kishi Nobusuke, was serving as prime minister. It appears Abe, a great admirer of his grandfather, had that history in mind.

The connection does not end there. Abe’s father and former party secretary Shintarō was quite fond of Mori. When Mori became prime minister and appointed Shinzō deputy chief cabinet secretary, he commented that he was repaying that old debt. Later, as prime minister, Shinzō recommended Mori to be chair of the Olympic organizing committee to return that favor. This trading of favors is how government staffing decisions work, it appears.

Whether or not the Tokyo Olympics can be held this summer depends solely on the success of efforts to contain the COVID-19 pandemic. Thus, the fate of Suga’s administration hangs entirely on the pandemic and the games.

If the Olympics actually are cancelled, it will surely be Suga, not Hashimoto, who makes that final decision, and it will likely be Mori who coordinates with President Thomas Bach of the IOC. No matter the cover story of changing committee chairs, the unfortunate truth is that nothing will change the politics-first system behind it all.