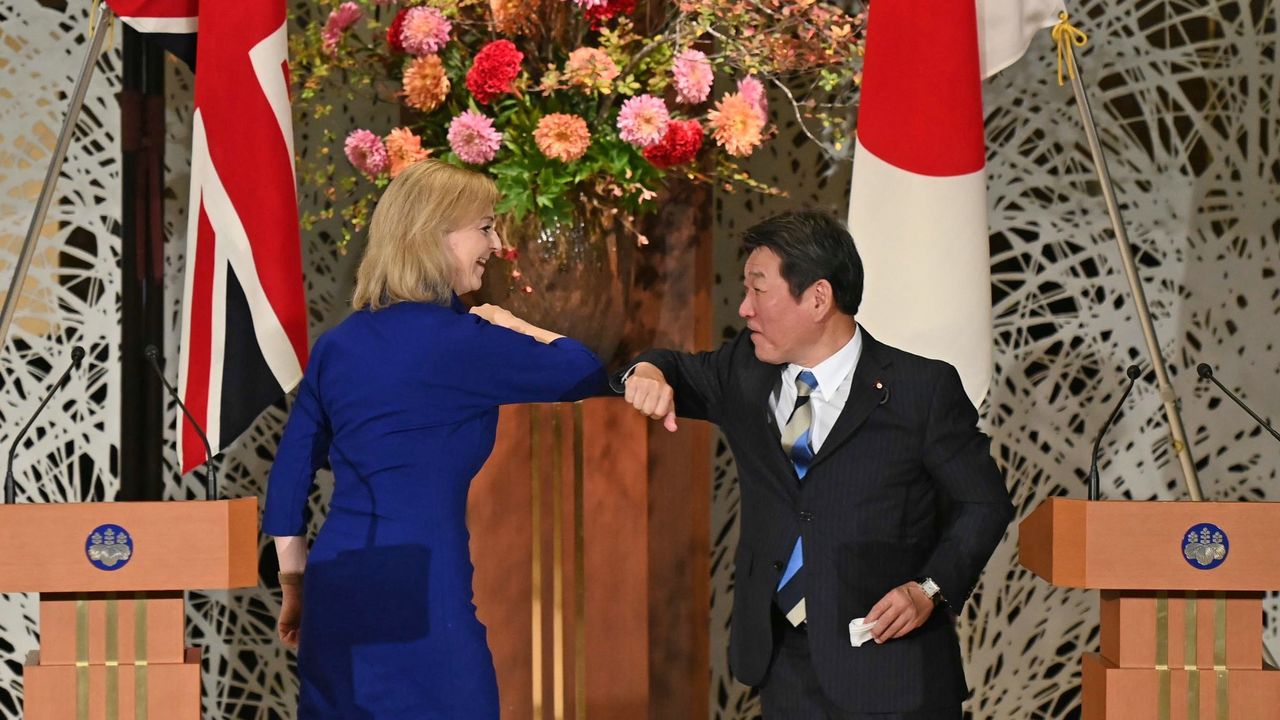 Politics Economy World Jun 22, 2021
Britain’s pivot toward Asia is accelerating, as the government of Prime Minister Boris Johnson maneuvers for membership in the Trans-Pacific Partnership. Okabe Noboru explores the reasons for the tilt and its significance for Japan, the Asia-Pacific, and the rules-based international trading system.

On June 2, 2021, the 11 member nations of the Comprehensive and Progressive Agreement for Trans-Pacific Partnership (Australia, Brunei, Canada, Chile, Japan, Malaysia, Mexico, New Zealand, Peru, Singapore, and Vietnam) agreed to set in motion the process for admitting Britain into their free trade pact. The decision is the latest development in Prime Minister Boris Johnson’s vision of a “de-Europeanized” Britain.

Out of Europe and into Asia

After the British people voted for withdrawal from the European Union in the June 2016 “Brexit” referendum, it took another four and a half years of grueling talks to complete the withdrawal process. On January 31, 2020, Britain left the EU but entered an 11-month transition period, during which it remained part of the European customs union and single market.

Those 11 months were packed with feverish negotiations to complete a free trade agreement between Britain and the EU by the year’s end. The agreement was signed on December 30, and on January 1, 2021, Britain completed the leaving process, regaining the freedom to set its own policy on such matters as immigration, while continuing to enjoy tariff-free trade with Europe.

At the same time, the British government has been taking decisive steps to strengthen economic ties with the Asia-Pacific.

On February 1, 2021, Britain became the first new country to formally request admission to the Comprehensive and Progressive Agreement for Trans-Pacific Partnership, which entered into force on December 30, 2018. At a video conference on June 2 this year, the pact’s 11 member countries gave the green light for the accession process to begin.

Understanding the Tilt Toward Asia

Why is Britain so eager to join a trans-Pacific trading bloc? Boris Johnson summed it up nicely: “Applying to be the first new country to join the CPTPP demonstrates our ambition to do business on the best terms with our friends and partners all over the world and be an enthusiastic champion of global free trade.”

Eager to expand British exports worldwide in the wake of Brexit, Johnson’s government has set a goal of securing free trade agreements covering 80% of the country’s trade by the end of 2022. It estimates that membership in the CPTPP would boost that ratio to 65%.

The trading bloc, which has a combined population of about 500 million and accounts for 13% of the world’s gross domestic product, includes some of the most dynamic economies in the Asia-Pacific region—widely regarded as a key engine of future world economic growth. At present, the 11 member nations account for just 8% of Britain’s exports, but accession to the partnership would afford British industry greater access to the region’s growing markets and new opportunities to expand their global supply chains.

Another reason Britain is keen on membership is that it wants to play a prominent role in formulating the rules of international trade. Now that the World Trade Organization has waxed dysfunctional as a rule-making body, the CPTPP, as a high-standards multilateral free trade agreement, is expected to emerge as a major forum for the negotiation of trade rules.

How, one might ask, does Britain even qualify for participation in a trans-Pacific partnership? Notwithstanding its 1971 withdrawal from “east of Suez,” Britain retains substantial connections with the Pacific, including the Pitcairn Islands, a British overseas territory. CPTPP members Australia, Brunei, Canada, Malaysia, New Zealand, and Singapore are all Commonwealth countries. Of these, Australia, Malaysia, New Zealand, and Singapore are also British allies as members of the Five Power Defence Arrangements.

The British government has been assiduous in laying the groundwork for membership in the CPTPP. After its departure from the EU at the end of January 2020, Britain was able to exercise its sovereignty and negotiate new trade deals with Canada, Japan, Mexico, and Vietnam, all members of the CPTPP.

The first and most important of these deals was the Japan-UK Comprehensive Economic Partnership Agreement. Negotiation of an EPA typically takes several years. But Japan and Britain completed the task in just four months, entering into talks in June 2020 and signing the agreement on October 23 the same year. With the final Brexit deadline looming, both sides had good reason to move quickly.

The Japan-EU EPA, which entered into force on February 1, 2019, had removed tariffs on Japanese automobiles, but that deal would no longer cover Britain after December 31, 2020. Without a separate agreement, British imports of Japanese cars would be subject to a 10% tariff—a tax that Japan was anxious to avoid. An early agreement was also in Britain’s interest, since it put pressure on the EU to conclude a free trade agreement with Britain or face tariffs that would give Japanese automobiles a price advantage on the British market.

The conclusion of the Japan-UK EPA also put Britain in a good position to gain admission to the CPTPP with Japan’s mediation and support. The post-Brexit pivot toward Asia is proceeding apace.

A Partnership for Free and Fair Trade

If Britain joins the CPTPP, the trading bloc will consist of 12 countries representing 16% of the global GDP (up from 13% now). Admission of a new member requires the unanimous agreement of the states that have ratified the agreement, but Britain can count on its EPA partner Japan, which currently chairs the CPTPP, to smooth the way.

For a multilateral free trade agreement, the CPTPP achieves an unusually high standard of liberalization and rule making with respect to international trade and investment. In addition to eliminating close to 100% of tariffs among the member countries and reducing the few remaining tariffs on industrial and agricultural products, it incorporates tough provisions on intellectual property rights and subsidies to state-owned enterprises. In terms of both tariff elimination and the formulation of rules for free and fair trade and investment, it stands head and shoulders above the larger Regional Comprehensive Economic Partnership agreement (signed in November 2020 by Japan, China, and 13 other countries of the Asia-Pacific region).

Meanwhile, several RCEP members have expressed interest in the CPTPP as well. In November 2020, President Xi Jinping said that China would “favorably consider” joining. But a Chinese bid for membership raises serious issues. If the agreement is to be meaningful, it must insist on strict adherence to the rules guaranteeing protection of intellectual property rights and prohibiting preferential treatment of state-owned enterprises. China has a poor record of compliance with WTO rules, and given its restrictions on investment and its treatment of state-owned enterprises, it would have difficulty meeting the high standards set by the CPTPP. Nonetheless, Beijing has begun approaching certain member countries informally. Some observers believe it hopes to take advantage of the vacuum left by Washington’s withdrawal and use its membership to neutralize US-led efforts to “encircle” China economically.

Japan has a heavy responsibility as current chair of the CPTPP. It must explain to Beijing in no uncertain terms that membership would require full acceptance of the agreement’s rigorous standards. With the accession of Britain, which has expressed a strong determination to help build a global regime of free and fair trade, the CPTPP will be in a stronger position to insist that other prospective members accept the same degree of discipline. In this way, it could become a powerful force against unfair trade practices.

Ultimately, however, getting China to mend its ways could be difficult without a coordinated effort by the world’s leading economies, including the United States. The EU rejected such an approach when it rushed into an investment agreement with China at the end of last December, brushing off China’s human rights violations and pleas from President-Elect Joe Biden to wait and consult. Leading the charge, with industry’s interests uppermost in mind, was Chancellor Angela Merkel of Germany, which currently chairs the EU. Merkel has made a point of distancing herself—and the EU—from Washington’s China policy. Europe, it appears, has little confidence that the Biden administration can overcome political divisions at home and resurrect the old American-led international order. Under the circumstances, it is vital that Japan and Britain work together closely in support of the United States, their closest ally, to stem the tide of protectionism and help lead the way toward free and fair global trade.

Needless to say, US membership in the CPTPP would be highly desirable. The agreement that exists today was a US initiative, led by the administration of Barack Obama. The WTO had become dysfunctional after China’s accession owing to mounting opposition to trade liberalization from the developing countries. The Obama administration saw the Trans-Pacific Partnership (as it was known then) as a means of promoting free and fair trade and countering China’s growing influence in the region. The idea was to seize the rule-making initiative again by building a high-standards free trade framework without interference from China, and then gradually extend membership to enough of the world that China would have no choice but to accede to its conditions. However, President Trump withdrew the United States from the agreement, and the US political climate at present would not allow Biden to reverse that decision.

That dynamic could change. Biden himself is well aware of the need for multilateral cooperation in the rule-making process to stand up to China’s economic aggression. With Britain poised to join the CPTPP, Germany, France, and other EU members may well decide they want to follow suit. If the CPTPP expands to include both Britain and the EU, the Biden administration may reconsider, and public opinion—which strongly supports measures to contain China—could shift in favor of US membership. Japan and Britain should work together to encourage and promote America’s participation.

At the Japan-UK “2+2” meeting held on February 3, 2021 (via video conference), the two countries’ foreign and defense ministers expressed their shared concern over human rights violations in Hong Kong and against the Uighurs, mentioning China by name. They also stressed the importance of upholding freedom of navigation through and overflight above international waters, including the South China Sea. Japan welcomed Britain’s deployment of its Carrier Strike Group to the western Pacific, and the two countries agreed to hold joint naval drills in the region.

Whether or not this cooperative relationship evolves into a “new Anglo-Japanese Alliance,” as some have suggested, its potential benefits for Japan’s national security are undeniable. While Biden has thus far taken a hard line on China, he may yet soften his stance in exchange for Beijing’s cooperation on climate change and other global issues. Japan must not rely solely on the United States. From its vantage point as China’s neighbor, Japan needs to impress on Britain the seriousness of the Chinese threat and enlist its help in stimulating international discourse on the subject.

At this point, Japan seems poised to become one of Britain’s foremost regional partners. If that budding partnership blossoms into a true alliance, complementing both countries’ relationships with the United States, it could be bad news for China’s global ambitions. Britain’s pivot toward Asia could have profound consequences not only for Japan and the Asia-Pacific but for the entire post-pandemic world order.