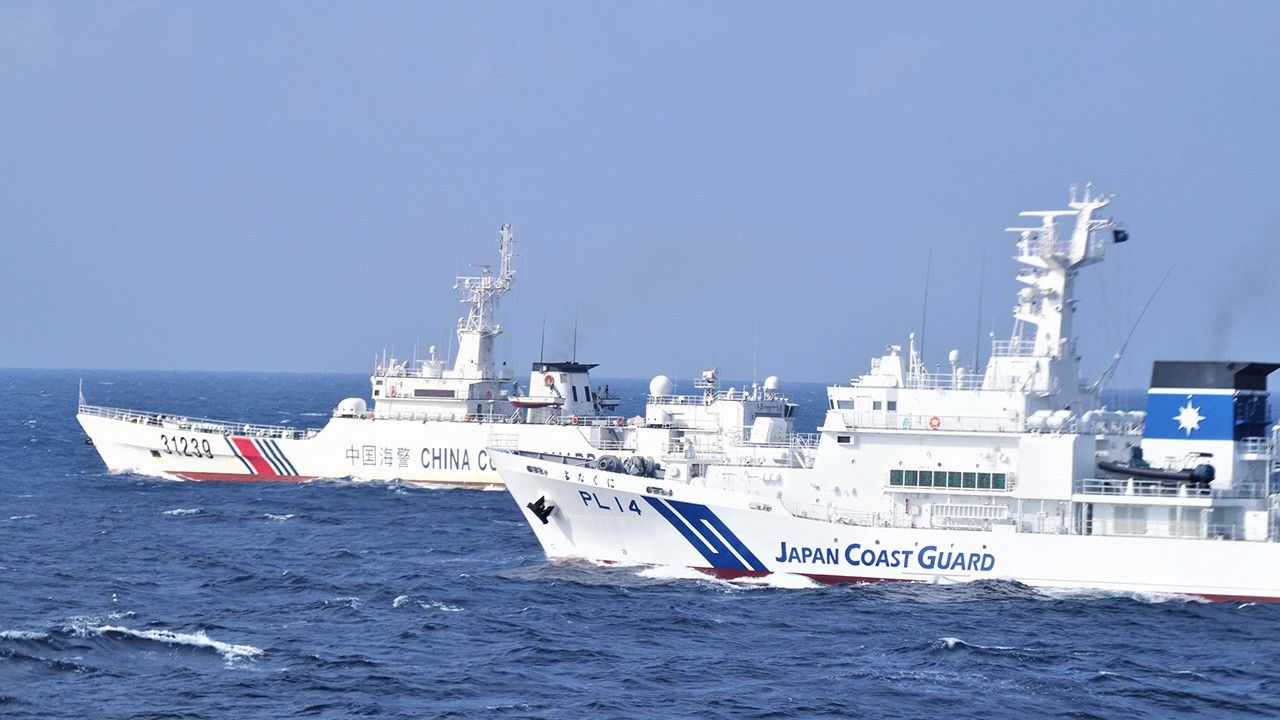 A Dramatic Change in the Situation

The Senkaku Islands are far-flung, isolated islands located 170 kilometers from Ishigaki in Okinawa Prefecture. The Senkakus were incorporated into Japanese territory in 1895 after a thorough investigation of whether other countries exerted control over the islands. Japanese nationals subsequently settled on the islands and even built a bonito processing factory there, living on Senkakus for a long period of time without triggering any international dispute.

The situation changed drastically in 1969 after a United Nations East China Sea seabed survey reported potentially significant underwater oil and natural gas reserves. Given their geographic proximity to the islands, China and Taiwan asserted their own claims to the islands in 1971. Then over the course of a week in 1978, 357 Chinese fishing boats—some of them armed—entered the 12 nautical mile (22 kilometer) zone surrounding the Senkaku Islands that comprises Japan’s territorial waters. After an incursion by a Chinese research vessel in 1996, Chinese government vessels have continued to enter Japan’s territorial waters around the Senkakus.

The situation deteriorated rapidly in 2012 after the Japanese government took ownership of three of the Senkaku Islands, including Uotsurishima. From then on, Chinese government vessels continued to enter Japan’s territorial waters monthly and are present almost daily in the waters of the contiguous zone between 12 and 24 nautical miles from the islands’ coastlines. Now that Beijing’s February 2021 passage of the Maritime Police Law has given Chinese Coast Guard vessels the authority to use weapons, the issue has gone beyond one of Sino-Japanese contention to take on international significance. 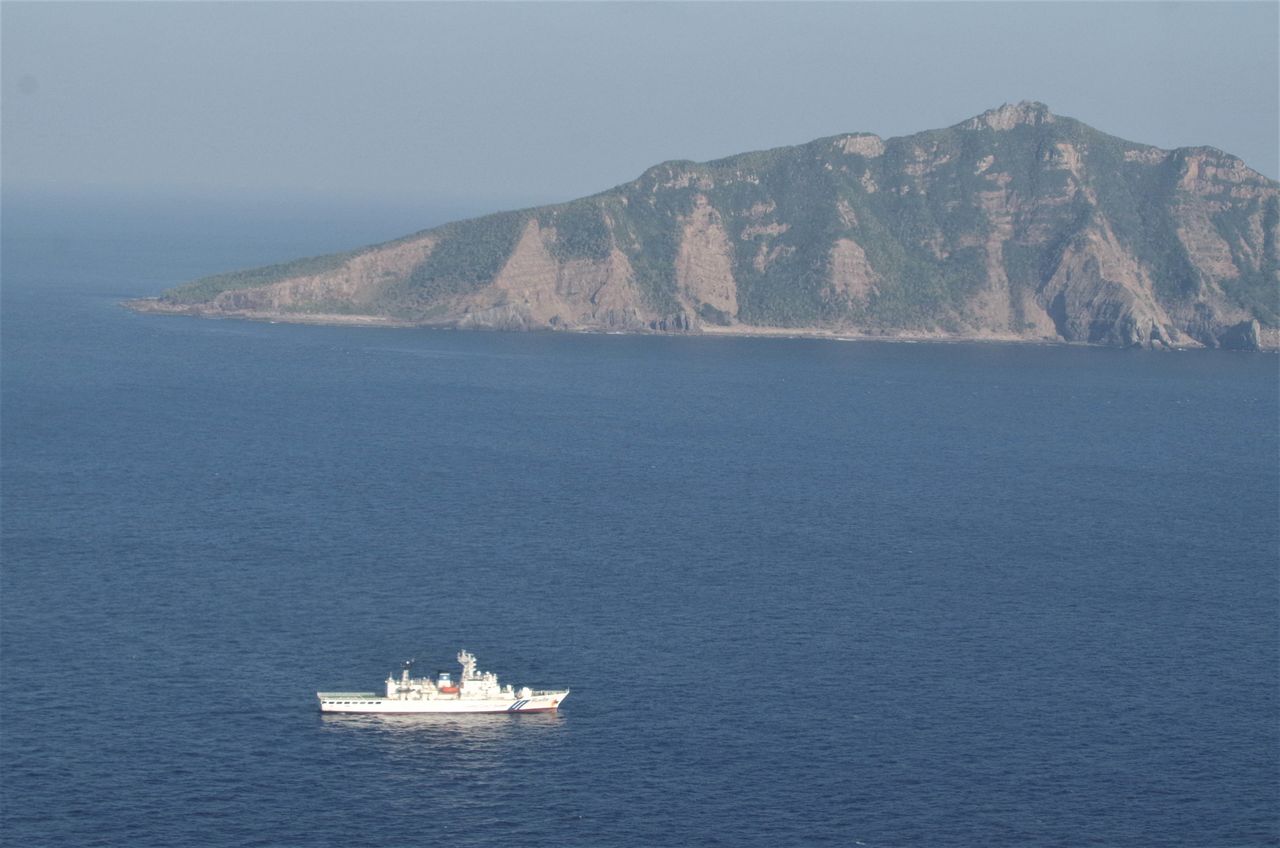 I spoke to Akimoto Shigeo, the current chair of the Japan Coast Guard Foundation’s Board of Directors. In addition to being a former Japan Coast Guard vice commandant for operations and former chief of the Guard and Rescue Department, Akimoto also led the 11th Regional Coast Guard Headquarters responsible for the coastal waters of Okinawa Prefecture—including the Senkakus. Akimoto provided vivid insight into the on-the-ground situation around the islands during our conversation.

“CCG ships almost always enter Senkaku waters in groups of four,” he notes. “One of them is always equipped with something like an autocannon. We have observed such territorial intrusions by armed vessels continuously since 2015.” An autocannon is capable of continuous and rapid firing of large caliber shells and is considerably more powerful than a machine gun.

“JCG patrol boats shadow CCG vessels from the time they enter the contiguous zone on a one-to-one basis. Using their radios and electronic billboards, JCG patrol boats warn CCG vessels in Chinese that they are in a Japanese-administered maritime zone. If they enter sovereign Japanese waters, we demand that they withdraw and attempt to obstruct further access. After an extensive game of cat and mouse, the Chinese vessels eventually leave territorial waters.”

Since last year, Akimoto explains, there has been an increased frequency in CCG vessels pursuing and pressuring Japanese fishing boats operating in the Senkaku’s territorial waters. When this happens, JCG patrol vessels insert themselves between the CCG and Japanese fishing boats to ensure the safety of the latter. 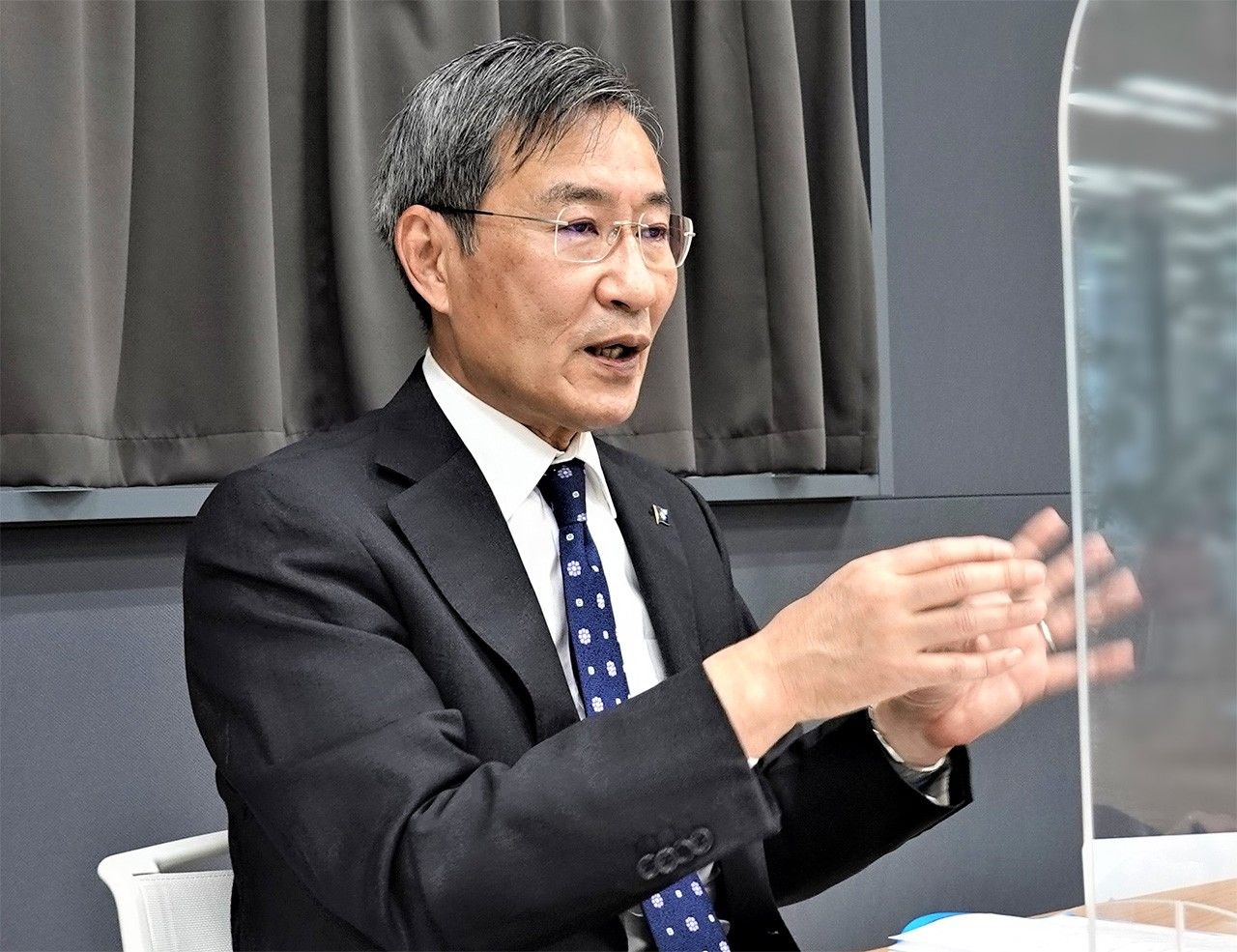 Akimoto describes the on-the-ground situation in the waters around the Senkaku Islands. (Photo by Amano Hisaki)

“From October 11 to 13, 2020, CCG vessels engaged in the continuous pursuit of Japanese fishing boats for 57 hours and 39 minutes while inside Japan’s territorial waters—the longest they have done so up until now. Soon after the Maritime Police Law came into effect in February 2021, we counted fourteen ships intruding into territorial waters over a six-day period.” Over 26 days out of the 28 in February, 96 ships entered the contiguous zone, further consolidating Sino-Japanese tensions over the Senkakus.”

By intruding into Japan’s territorial waters, and provocatively claiming them as their own, Akimoto argues that “CCG vessels are forcefully challenging the status quo and, in the process, violating international law.”

The CCG Under Military Jurisdiction

Operating in not only waters surrounding China but throughout the East and South China Seas, what kind of organization is the CCG? Previously, China’s State Council (an administrative body) oversaw a disparate web of organizations with varying maritime responsibilities, including a Ministry of Public Security bureau in charge of border defense, the State Oceanic Administration, which handled natural resource issues, and agencies responsible for fisheries and customs. These entities were consolidated into a single organization called the Coast Guard in 2013. Organizational jurisdiction for the CCG was then moved in 2018 from the State Council to the PAP, or People’s Armed Police Force, overseen by China’s powerful Central Military Commission.

Japan’s Coast Guard is a maritime police agency established as an external bureau within the Ministry of Land, Infrastructure, Transport, and Tourism. China’s Coast Guard as of 2013 was jurisdictionally equivalent to the JCG, but the move to the PAP obscured the nature of its missions and the CCG’s legal status. The Maritime Police Law adopted at the National People’s Congress (equivalent to the Diet) earlier this year, however, clarified its military mandate.

Authorization of the Use of Weapons

Japan is not the only country concerned that this new development violates international law. For example, Article 22 of the MPL pertaining to marine safety and security states:

When national sovereignty, sovereign rights, or jurisdiction is being illegally violated at sea by a foreign organization or individual, or is in imminent danger of illegal violation, a coast guard agency shall have the power to take all necessary measures including the use of weapons to stop the violation and eliminate the danger according to this Law and other applicable laws and regulations.

Thus, if China decides its sovereignty has been violated, the CCG is essentially authorized to use weapons against JCG or Japanese fishing vessels. This makes clear the military character of the CCG as an organization capable of conducting defense operations.

If a CCG vessel enters further into territorial waters, he notes, the JCG boat will try to safely guide it out of Japanese waters while avoiding collisions. While JCG captains have improved their ability to do this, it requires considerable focus over a long period of time to ensure that ships remain safely apart.

“Given the provisions of China’s new law,” Akimoto continues, “the JCG must now also consider the possibility of weapons being used against them as they attempt to shadow Chinese government vessels. However, if Japan focuses only on the issue of authorizing the JCG to also use weapons it will play into China’s hands. We need to continue our patient response and prepare for eventualities such as the use of weapons against us, while avoiding any escalation that would justify a military confrontation and the resolution of problems through the use of force.” 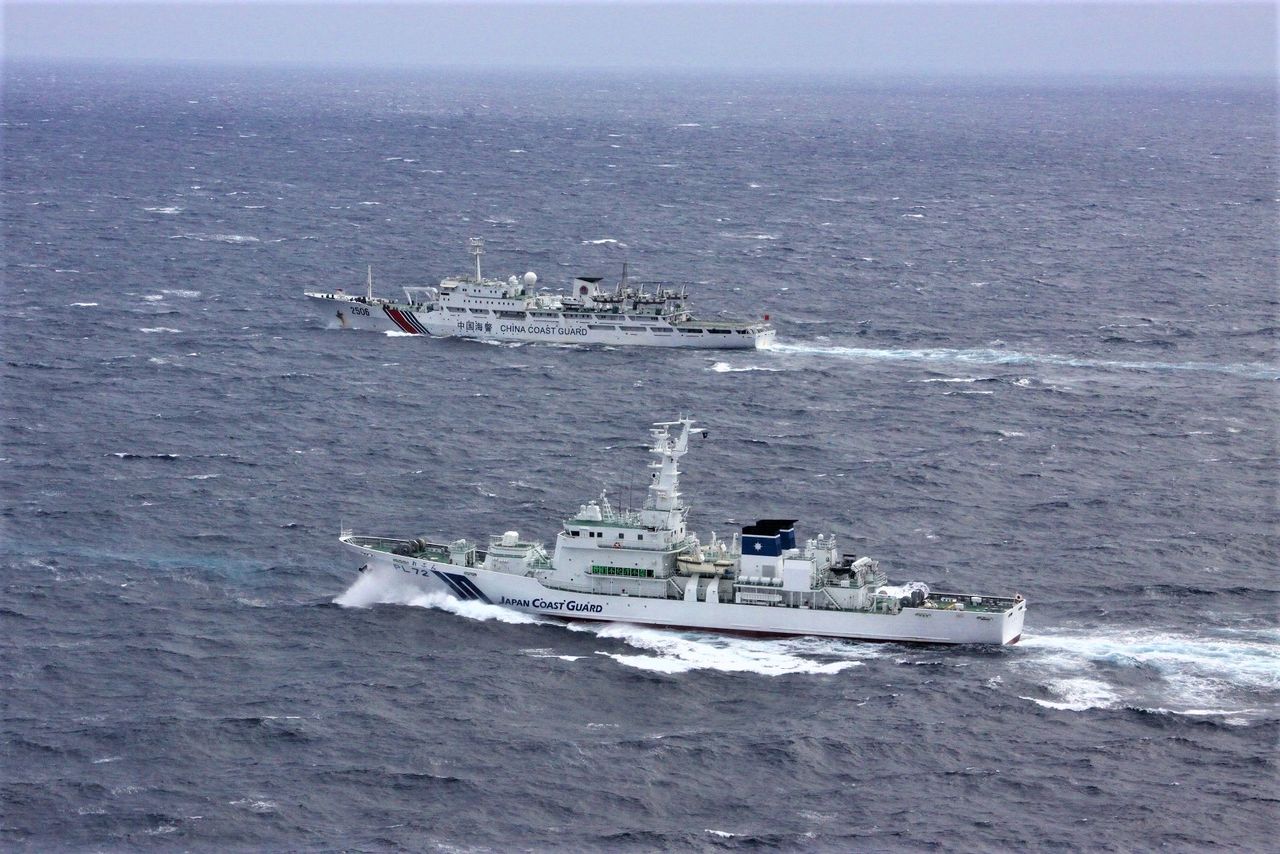 The frequency of such intrusions represents a challenge to the Japan-US Security Treaty. The United States government recognizes that its commitments to jointly defend Japan under Article 5 of the Treaty also apply to the Senkakus. The new administration of President Joe Biden reconfirmed this stance at the March 16 Japan-US Security Consultative Committee (2+2) meeting.

However, this treaty obligation only applies to “armed attacks in an area under the administration of Japan.” If China gradually undermines Japan’s effective control of the Senkakus and takes control for its itself, this could place the islands beyond the scope of the treaty, as is the case for Takeshima. This is China’s long-term aim in this battle of attrition.

Japan’s response has been to strengthen the JCG, to enhance the ability of the Self-Defense Forces to provide rear area support to the JCG, and to deepen the Japan-US alliance. However, the quantitative discrepancy between China and Japan in terms of government vessels that can be deployed to the waters around the Senkakus continues to widen.

When the Japanese government purchased the land titles to three of the Senkaku Islands in 2012, the JCG possessed 51 vessels of 1,000 tons or more, while China had 41 such vessels. Two years later, however, the situation was reversed, as China boasted 82 such ships while Japan possessed 54. In 2019, China possessed 130 government vessels greater than 1,000 tons, essentially double the number (66) possessed by the JCG. The JCG’s disadvantage is also compounded by the relatively advanced age of its heavier vessels. For this reason, there is great concern within political circles in Japan about what could be done in the case of a major incursion by official Chinese vessels and whether the JCG can protect the territorial and contiguous waters around the Senkakus—an area similar in size to the Japanese island of Shikoku.

Based on his experience in confronting Chinese government vessels around the Senkakus, Akimoto is adamant that “the Senkaku Islands issue is not something that can be solved by the JCG alone. We need to further enhance the JCG’s capacity to respond to activity in the area around the Senkakus, but CCG vessels aren’t intruding into the Senkaku territory at their own discretion—this is on the orders of Beijing.” Akimoto therefore ultimately believes that “the solution must be a political and diplomatic one. It is essential to emphasize to a greater number of countries the importance of the values of the Free and Open Indo-Pacific.”