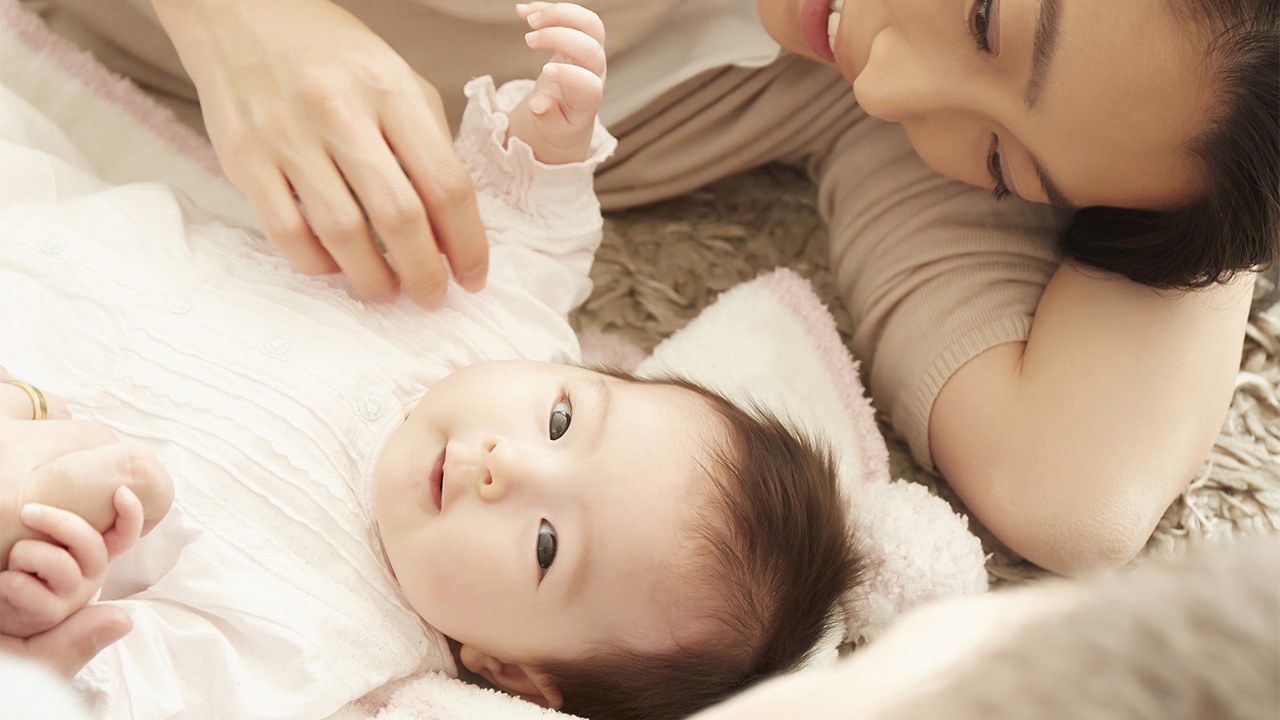 Society Politics Economy Health Family May 25, 2021
The end of the pandemic is on the horizon as more individuals are vaccinated against COVID-19. However, now that society has seen that so many aspects of work can be accomplished without face-to-face contact, teleworking and other developments may be here to stay. An economist considers the potential long-term impact of reduced person-to-person interaction on the Japanese population.

The onset of the COVID-19 pandemic in early 2020 forced people to sharply curtail social interactions. Companies were pushed to adopt telework and schools to implement remote learning, helping transform how members of society work and study. However, the coronavirus has also severely impacted the economy and people’s physical and emotional wellbeing, factors that have exacerbated Japan’s already bleak demographic situation. It will require a concerted effort on the national and local levels to move the needle back into positive territory once life returns to normal.

At the end of 2020, the Ministry of Health, Labor, and Welfare released statistics on pregnancies through October that show how following the onset of the pandemic, the number of reported pregnancies in Japan has dropped compared with the previous year. The decline was particularly precipitous in May 2020, the month in which the government declared a state of emergency, with the number of reported pregnancies falling by 17.6%. 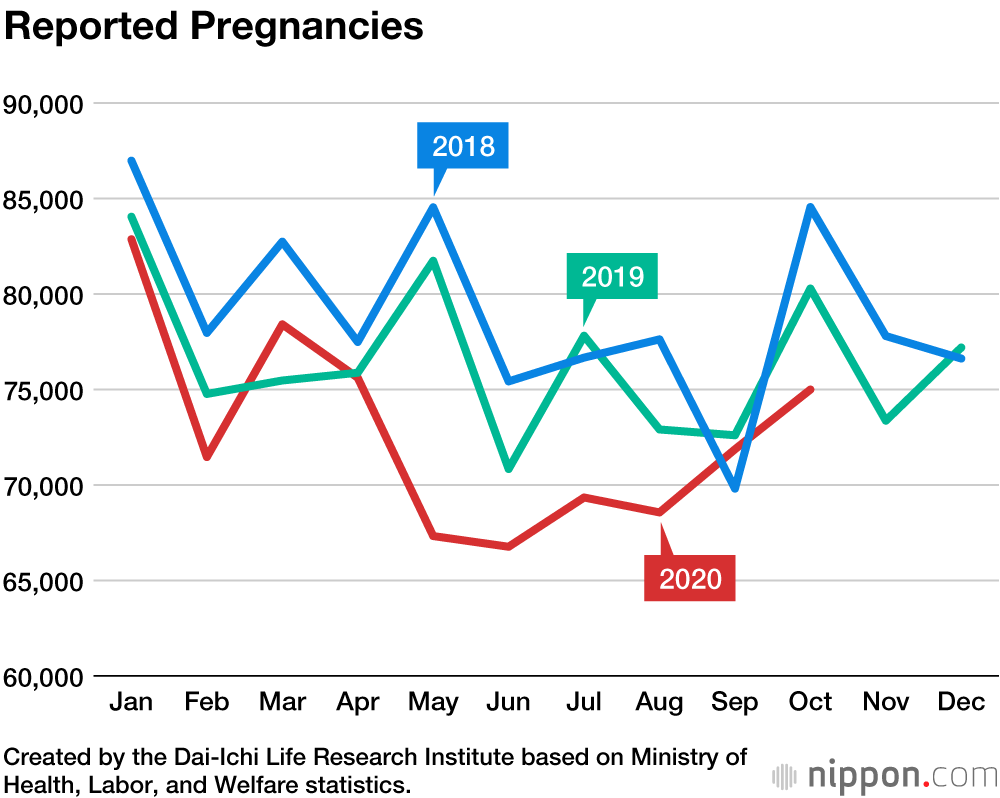 As expecting mothers typically notify the municipality where they live of their condition by the eleventh week of pregnancy, these figures foretell the birth rate seven or eight months down the road, with the decline in reported pregnancies in 2020 manifesting itself as a drop in the birth rate in 2021. The second graph forecasts the number of births in 2020 and 2021 and is based on certain assumptions about how many pregnancies were reported in November 2020 and beyond. It shows that births fell from 865,000 in 2019 to 840,000 in 2020. It is projected to decrease further to 769,000 in 2021. Population forecasts based on baseline assumptions about births and deaths released by the National Institute of Population and Social Security Research projected that Japan’s birthrate would not fall to this level until 2034, providing a stark illustration of COVID-19’s impact on the rate of population decline.

Several coronavirus-related factors are believed to have brought about the sudden decline in pregnancies. The first is worsening economic conditions. Japan’s unemployment rate has steadily ticked up since reaching a low of 2.2% in December 2019, climbing to 3.0% in December 2020. Salaries in 2020 also fell 1.2% compared with the year before as bonuses declined and work hours shrank. The service industry, particularly businesses that require face-to-face interactions, was hit hard by the government’s stay-at-home orders. The resulting drop in incomes is believed to have influenced a large portion of couples to put off having children.

The second factor is people avoiding non-essential visits to the doctor out of concern of contracting COVID-19. This is illustrated by a fall in medical expenses in 2020. While Japanese healthcare costs are rising in structural terms due to the country’s aging population, expenses from April to September were lower than the same period the year before. I surmise that this desire to avoid hospitals was also a factor in the decline in pregnancies and childbirths by leading couples to postpone having children.

Thirdly is a decline in dating and marriage amid government calls to pare back face-to-face interactions. Coronavirus measures made it difficult for singles to meet potential partners, and restrictions forced many engaged couples to hold off on wedding ceremonies. Some 538,000 pairs tied the knot in 2020, 12.7% fewer than in 2019, with the decline having a knock-on effect on births. 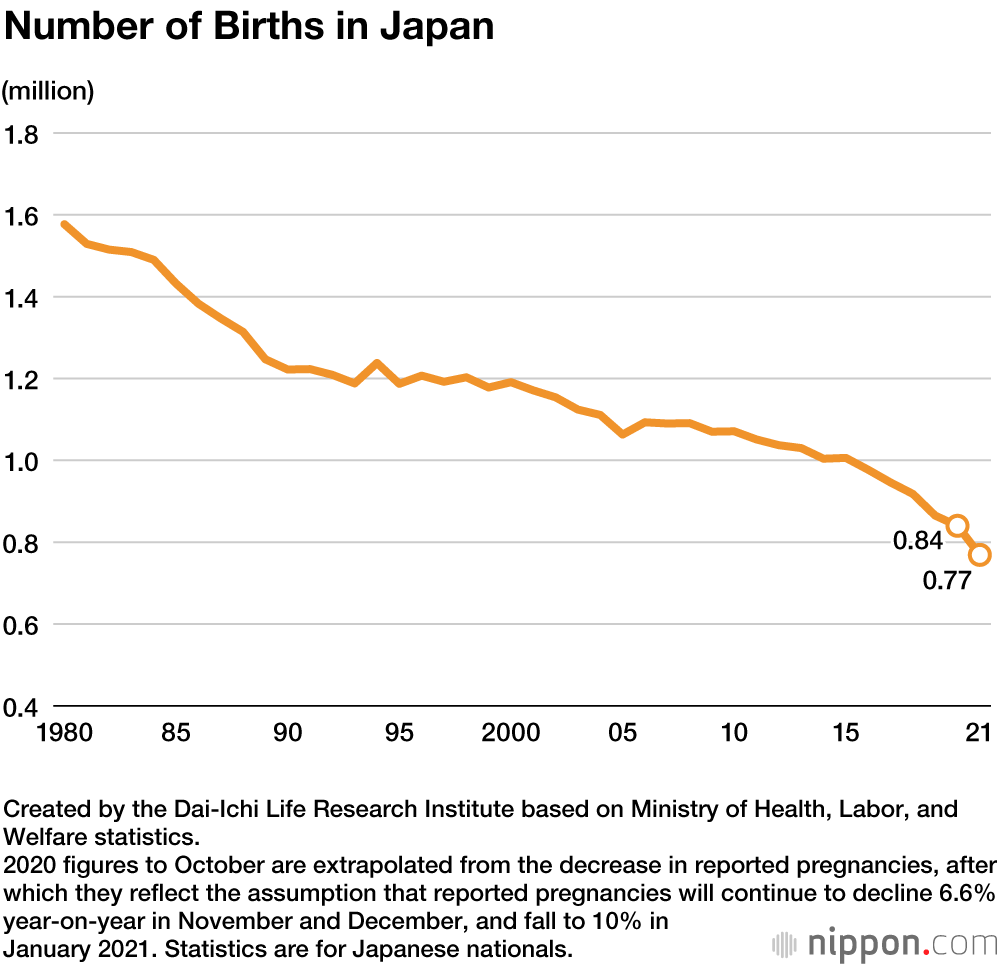 The question on the mind of experts and government officials is whether the decline in births will continue past 2021. If the drop in the birthrate turns out to be only temporary, the dip will not sizably impact population trends. The implications of a one-time 100,000 drop in births are completely different from those of a 100,000 year-on-year decrease over the next 10 years, which would equate to 1 million fewer babies.

Let us now consider how long these three factors are likely to persist. Vaccination is the key to resolving the negative effects on the first factor, the economy. It will be a while before the entire population has been vaccinated, the vaccine’s efficacy verified, and individuals no longer any need to avoid the “three Cs”—closed spaces, crowded places, and close-contact settings. As economic activity recovers, the government will withdraw employment protection measures and financial assistance, thereby suppressing economic recovery. While the impact of economic factors on the birthrate is projected to gradually wane as more people are vaccinated, it is likely that these effects will linger for some time.

The second factor, the avoidance of doctors, really comes down to the progress of vaccinations. While vaccine hesitancy appears to be gradually reducing, these effects are likely to persist at least until the end of the year.

More likely to stick around is the third factor, the effect on dating and marriages. While there will be more in-person meetings as social distancing measures are relaxed, remote working and online schooling are likely here to stay. These cultural changes have the effect of reducing person-to-person contact, and there is a risk that this will have a protracted effect on the birthrate by causing a reduction in marriages, and therefore births.

Based on a straightforward simulation, the graph below shows the effect on Japanese population if the current downward pressures persist, that is, assuming the three factors that are bringing down the birthrate in 2021 continue to be present. 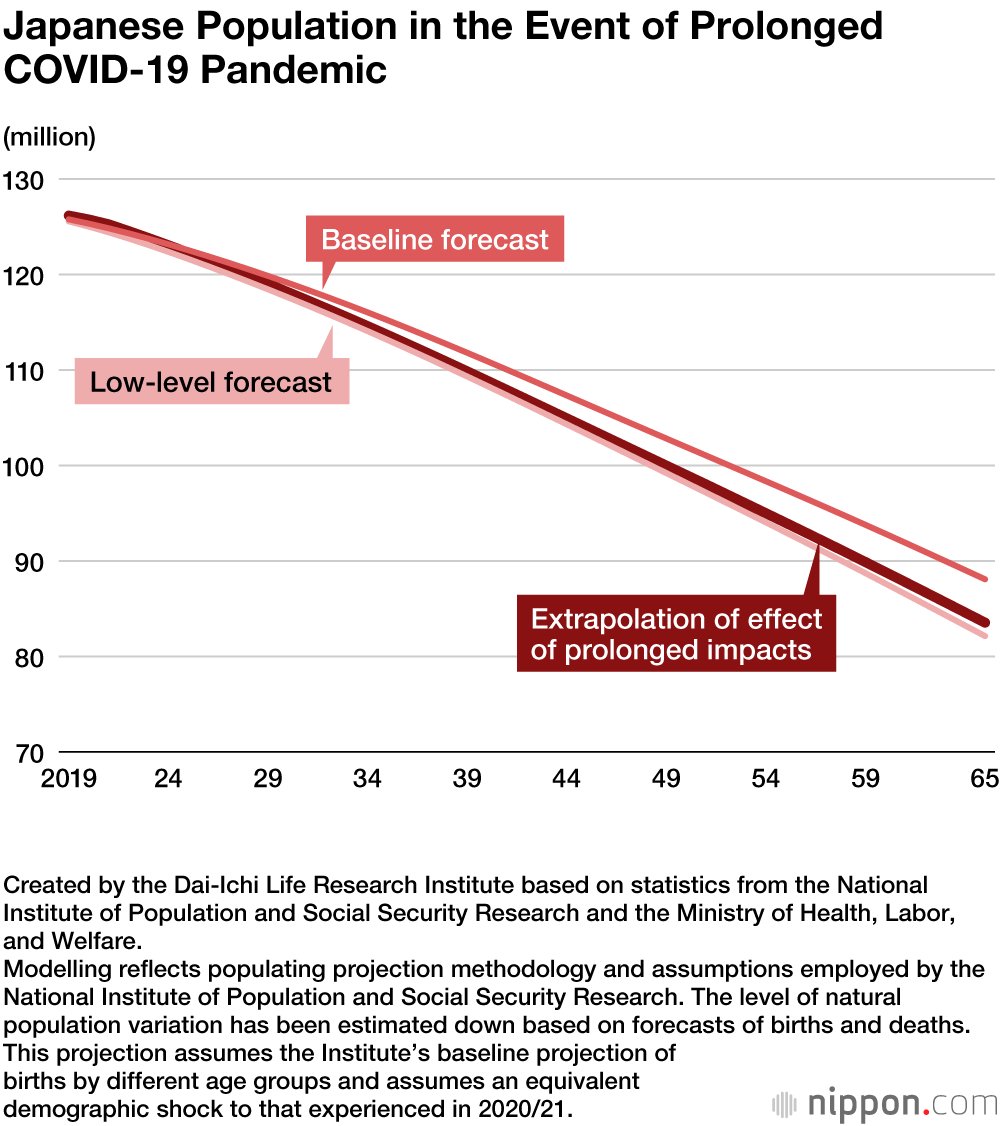 The simulation shows the population decreasing below the baseline births estimate used by the National Institute of Population and Social Security Research, and approaches that seen in the low-level birthrate scenario (in both cases, deaths have been assumed at baseline). It projects the population in 2065 will be 83,530,000, which is around 4.5 million less than the 88,080,000 figure extrapolated using the baseline birth and death rate assumption. In this simulation, Japan’s population falls below 100 million for the first time in 2049, four years earlier than the date estimated by the Institute’s mid-term forecast of 2053.

This simulation, which assumes that the downward population pressures due to COVID-19 will continue for the foreseeable future, may at first appear overly pessimistic. After all, the virus itself will gradually come under control as more people are vaccinated. However, it is unclear how long the third factor, that is the impact on dating and marriages due to the reduction in in-person meetings, will last.

The shift to remote work has benefited many employees in terms of providing greater flexibility in deciding where they work from and improved work-life balance. The government in its response to the COVID-19 has prioritized secondary issues like promoting remote work. Authorities should instead be focusing their resources on the more fundamental issue of easing the financial burden of raising a family. To achieve this, the government needs to prop up the real economy, which is currently in the grips of a pandemic-induced slump. In particular, employment related grants and other financial policies rolled out last year are planned to be gradually phased out beginning later this year. Too rapid a retraction of policies at a time when the impacts of COVID-19 are still being felt could exacerbate the negative economic effects of the virus. In the past, Japan saw how worsening recessions ushered in an “ice age” for job hunters, which then led to sluggish birthrates. A good exit strategy is needed to ensure that the COVID-19 pandemic does not trigger more chills for the job market.

The government needs to put policies in place that support families so as to relieve the economic unease gripping so many households. The government must seriously consider bolstering comprehensive support to families with more than one child along with other measures that have been in order for some time. While Prime Minister Suga Yoshihide has backed extending the national health insurance scheme to cover fertility treatments like in vitro fertilization will reduce the financial burden of such procedures and enable more couples to have children, this only helps with the first stage of having a family. If anything, the financial concerns experienced by prospective parents are more to do with the cost of schooling than expenses related to birth. The government needs to support those with children in a way that shows more consideration to these issues.

While a decline in the number of births in 2021 seems all but certain, in order to prevent the scenario I have painted, every effort must be made to return births to pre-COVID-19 levels. Now is the time for the government to further bolster measures to counter the low birthrate.