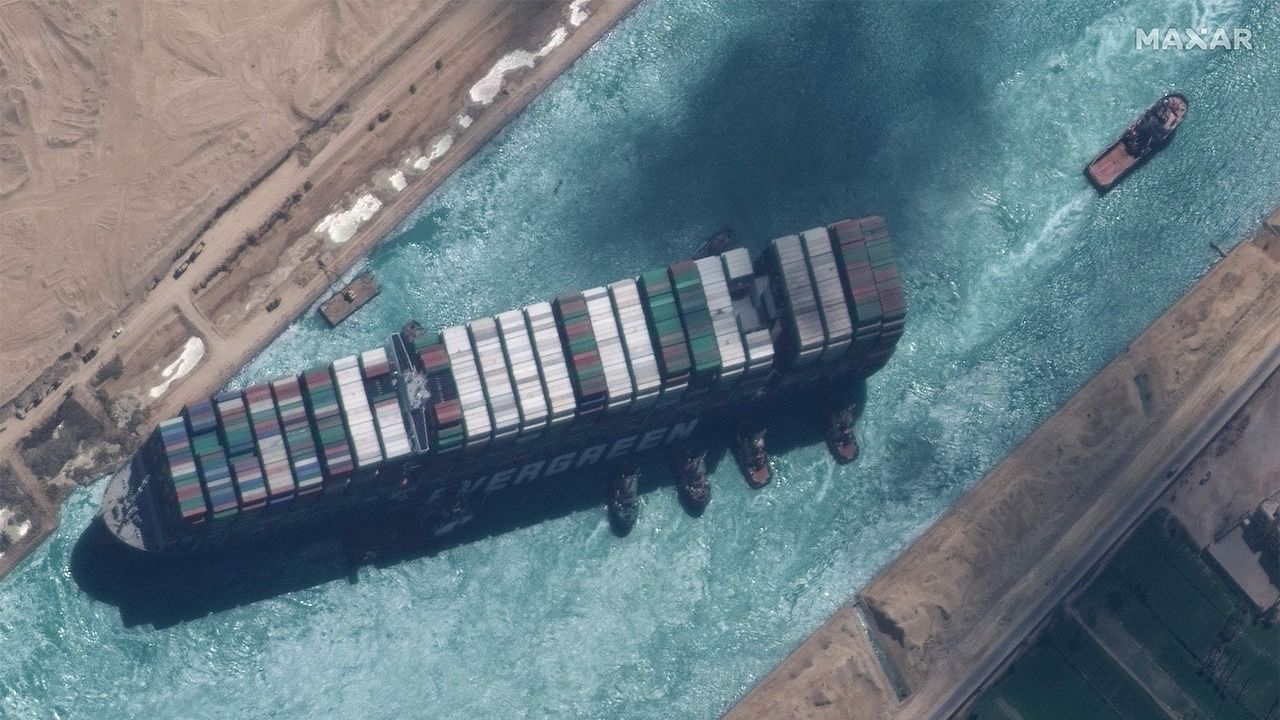 The Suez Canal Accident and the State of Global Shipping

Economy World Jun 17, 2021
In March 2021, the Ever Given, one of the world’s largest container ships, ran aground in the Suez Canal, blocking it completely for a week and causing an estimated ¥400 billion in global economic damages. Takushoku University professor and international logistics expert Matsuda Takuma discusses the incident within the context of recent developments in the global shipping industry, particularly under the impacts of the COVID-19 pandemic and ongoing US-China trade conflict. 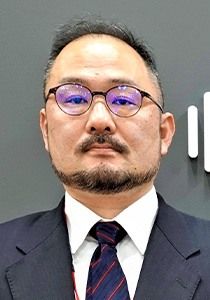 Professor at Takushoku University, specializing in international logistics and shipping economics. Born 1973. Graduated from the University of Tsukuba and went on to earn his PhD at the Tokyo Institute of Technology. Served as a researcher at the Japan Maritime Center before taking his current position. Member of the Japan Society of Logistics and Shipping Economics and the International Association of Maritime Economists.

A Blow to the Global Economy

The Ever Given is owned by the Imabari Shipbuilding group shipping company Shōei Kisen, and is operated by a Taiwanese container shipping company. The vessel is 59 meters wide and 400 meters long, making it far bigger than Tokyo Tower is tall (333 meters). It was traveling from China to the Netherlands, carrying over 18,000 shipping containers, when it ran aground some 10 kilometers from the canal’s southern Red Sea entrance. 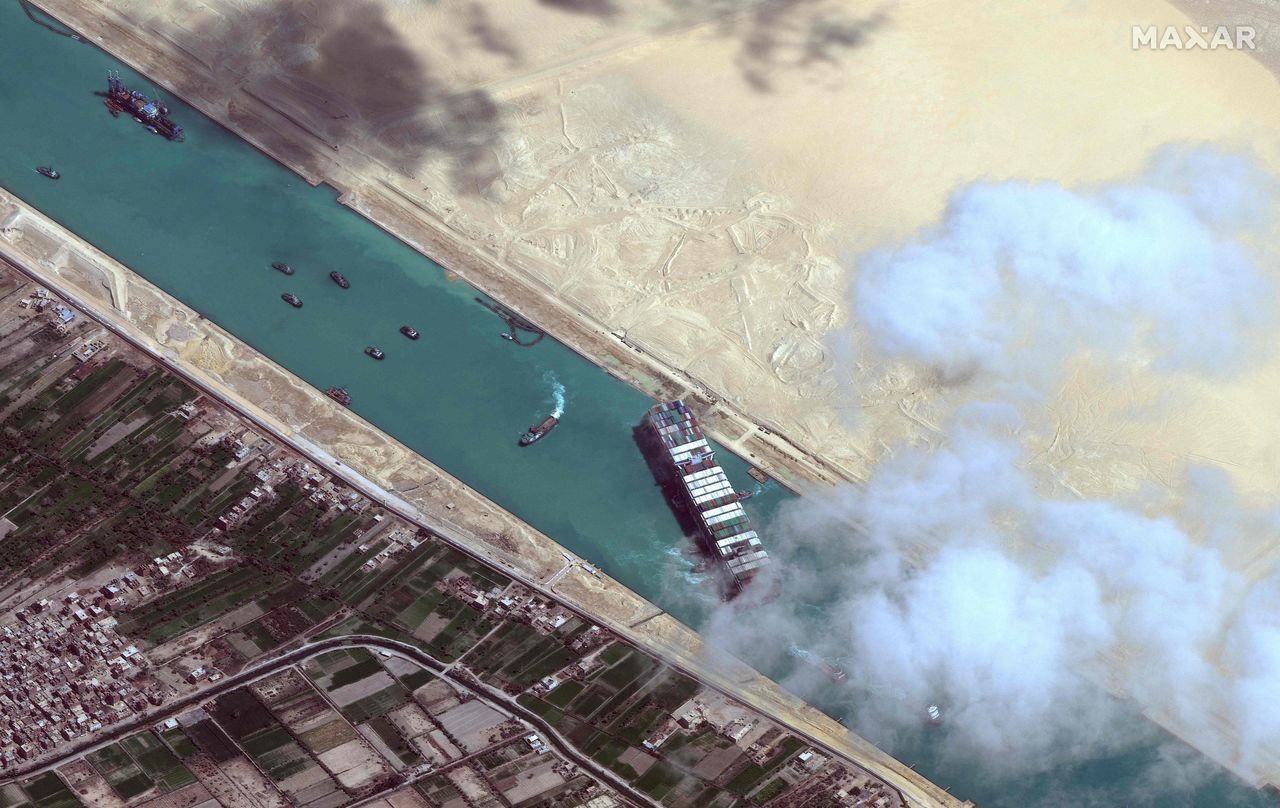 Suez Canal transit was halted for a week after the Ever Given, one of the world’s largest container ships, ran aground. Photo taken March 29, 2021. (© AFP/Jiji)

The ship became wedged diagonally across the 250-meter wide passage, blocking it completely for one week. The incident had global repercussions, as fully 12% of the world’s maritime shipping passes through the Suez Canal. The blockage kept 422 ships waiting on both sides of the canal, causing major delays in global delivery chains.

How much impact will this have? “Jan Hoffmann of the United Nations Conference on Trade and Development, a former head of the International Association of Maritime Economists, has calculated the global economic damage at somewhere between 2.2 billion and 3.9 billion dollars, or around 240 billion to 400 billion yen. Applying the calculation to Japan puts the impact on national trade between 5.2 billion and 8.6 billion yen,” says Matsuda.

The accident is also exacerbating a rise in global shipping rates, he explains. ”Recent years have already seen shipping rate increases and a shortage of shipping containers, but the blockage worsened container turnover delays, leading to congestion at ports in Europe and elsewhere. This has driven a temporary increase in container freight rates to Atlantic and European destinations, delaying any return to normal.”

Maritime shipping is an essential part of modern international trade, and containerization, the packing of goods into standardized metal shipping containers, has helped accelerate globalization since the 1960s. Container ships have now become the primary way to move goods due to quicker loading and unloading, making sea and land transport more efficient. The ships have also been growing larger, and carrying capacity doubled between 2005 and 2021. The Ever Given stands at the end of that trend as one of the largest ships on the sea.

The shipping industry is also subject to global issues, as Matsuda explains. 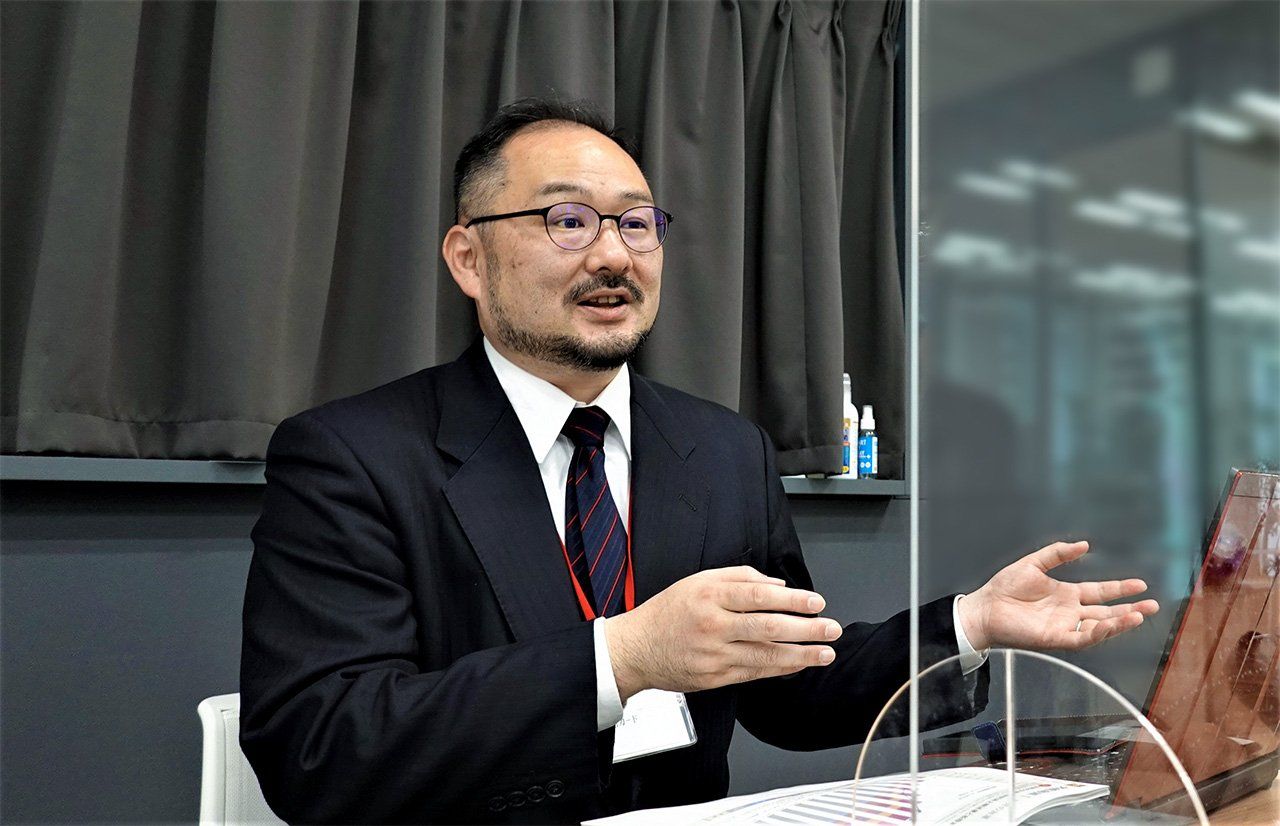 ”Container transport has waned somewhat since 2018, when the US-China trade war went into overdrive, and container transportation has been held back. Then came the pandemic, and with it lockdowns that kept port and harbor laborers at home. This hampered loading and unloading, and ships were forced to wait at sea. Container movement was slowed, and the container shortage became more noticeable,” he says. “At the same time, many countries saw an increase in nesting demand. Initially, analysts believed that the pandemic would lead to a drop in the movement of goods. However, many daily necessities also move by container, and demand there remained firm. Ships also carry many of the products sold online, so container shipping actually increased. Demand outstripped supply, and shipping rates spiked to nearly triple what they were a year before. That was the situation when the Suez accident came and worsened the container shortage and shipping rate increases.”

The accident reminded the world of just how important the Suez Canal is. The primary role of a canal is as a shortcut; “The Suez Canal has a near monopoly on connecting Europe with Asia,” notes Matsuda. 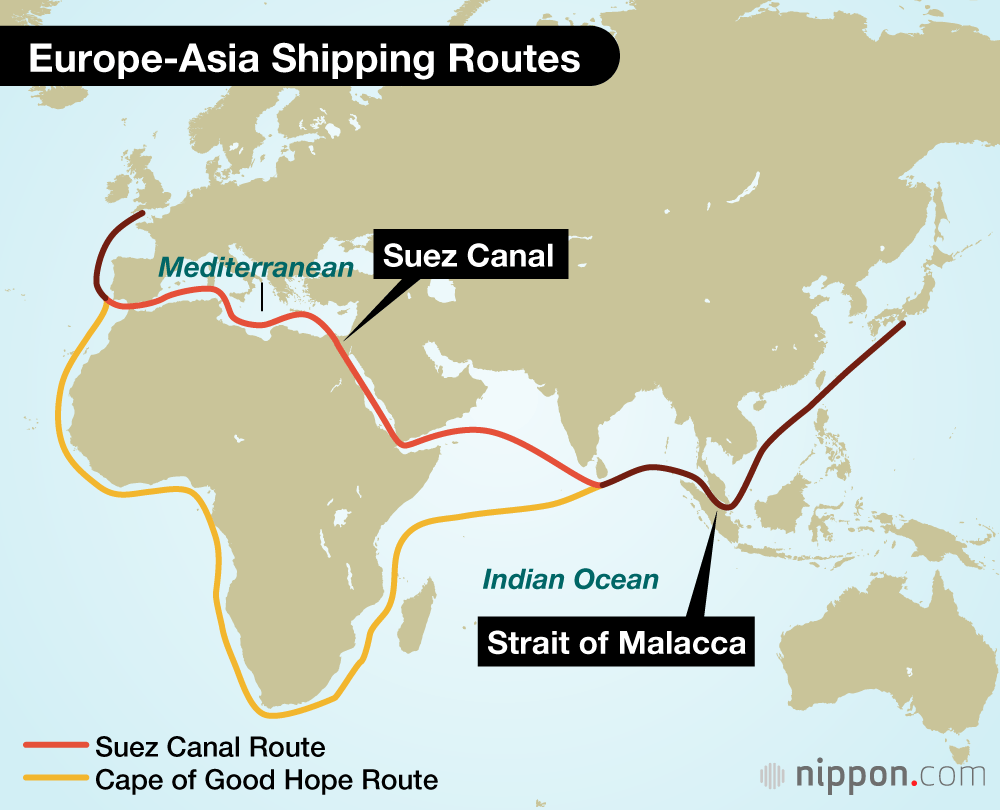 Taking the Suez Canal from the Arabian Sea to London can shave around 8,900 kilometers, or half the total distance, off the route around the Cape of Good Hope. It shortens sailing time by about a week, thereby halving fuel costs. Many ships using the Suez also visit Mediterranean ports to transship cargo along the way. The advantages add up to make it a global logistics hub.

The canal has been expanded several times since its opening in 1869, and now it can handle nearly any ship in the world, excepting certain tankers and bulk freighters. However, one cause of the recent accident is that the Ever Given was barely within the size limits. 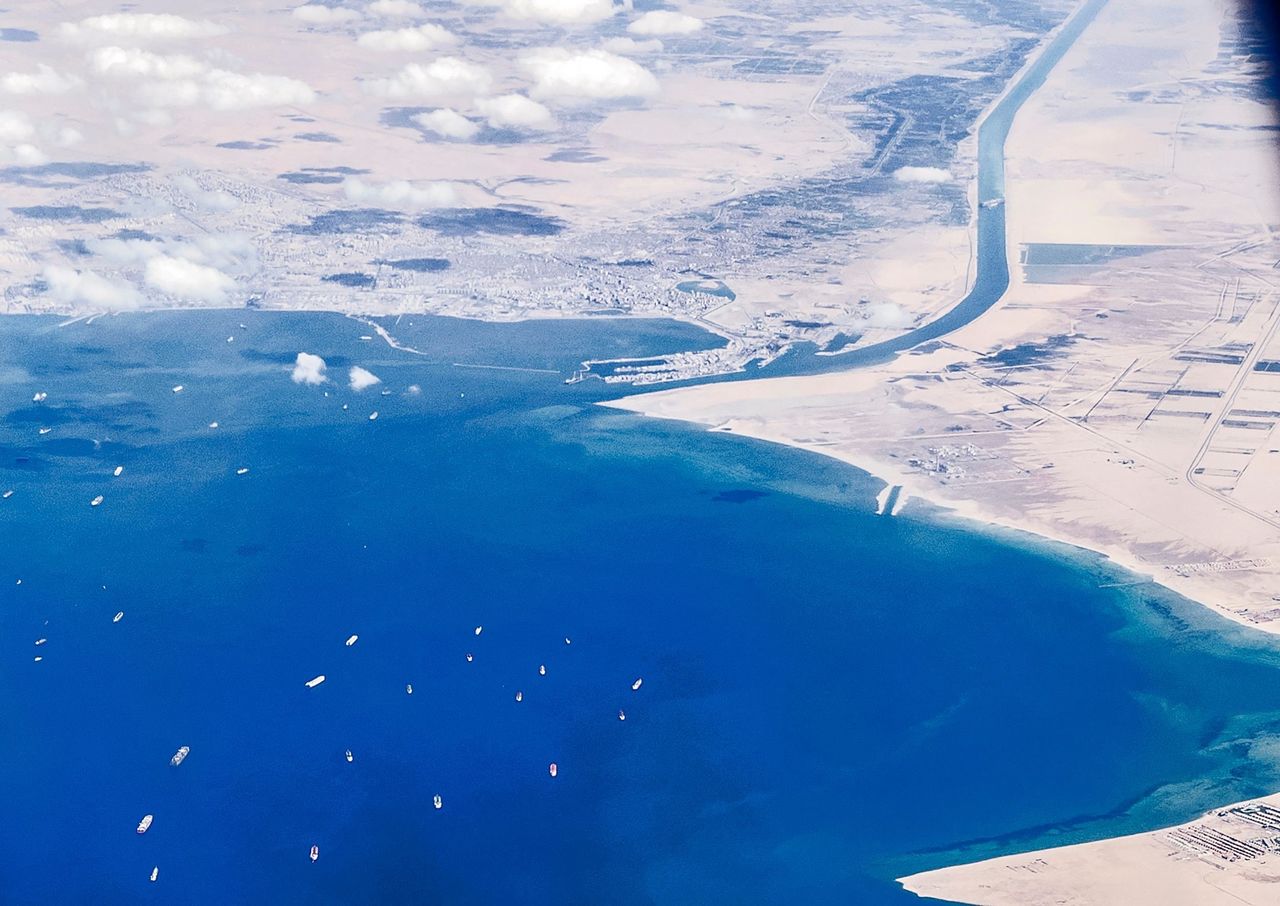 The southern end of the Suez Canal on the Red Sea. The huge container ship Ever Given can be seen blocking passage where it has run aground. The blockage caused a major backup of ships waiting to pass through. Taken in Egypt, March 27, 2021. (© AFP-Jiji)

Passage fees for the 193-kilometer canal vary depending on ship class, and the fee for the Ever Given is estimated to be between ¥50 million and ¥60 million, according to Matsuda.

The Panama Canal, another route connecting Asian ports with the Atlantic Ocean, has an entirely different structure and incorporates a lock gate system of aquatic elevators because of the difference in water level between the Pacific and Atlantic sides. The Panama Canal also has a stricter limits on ship size, so massive ships like the Ever Given are unable to pass. That means that many ships heading between Asia and the eastern United States still use the Suez.

What can the world do if, as this incident demonstrated, the Suez Canal becomes impassable? The world’s shipping companies have already begun investigating options. “If a blockage comes when ship fuel prices are low, it may pay to take the longer route around Africa. Recently, container shipping companies are moving more freight from Asia to Europe by rail, as well. And when shipping from Asia to the US east coast, you can also unload your cargo on the west coast for land transport,” says Matsuda.

Russia has recently begun touting the Northern Sea Route as a third option. The route passes through the Arctic Ocean off the northern coast of Russia, and is said to reduce the distance to London by 60%. It is currently only open when the sea ice melts in warm weather, but Russia is building an ice breaker fleet to help keep it traversable year-round. 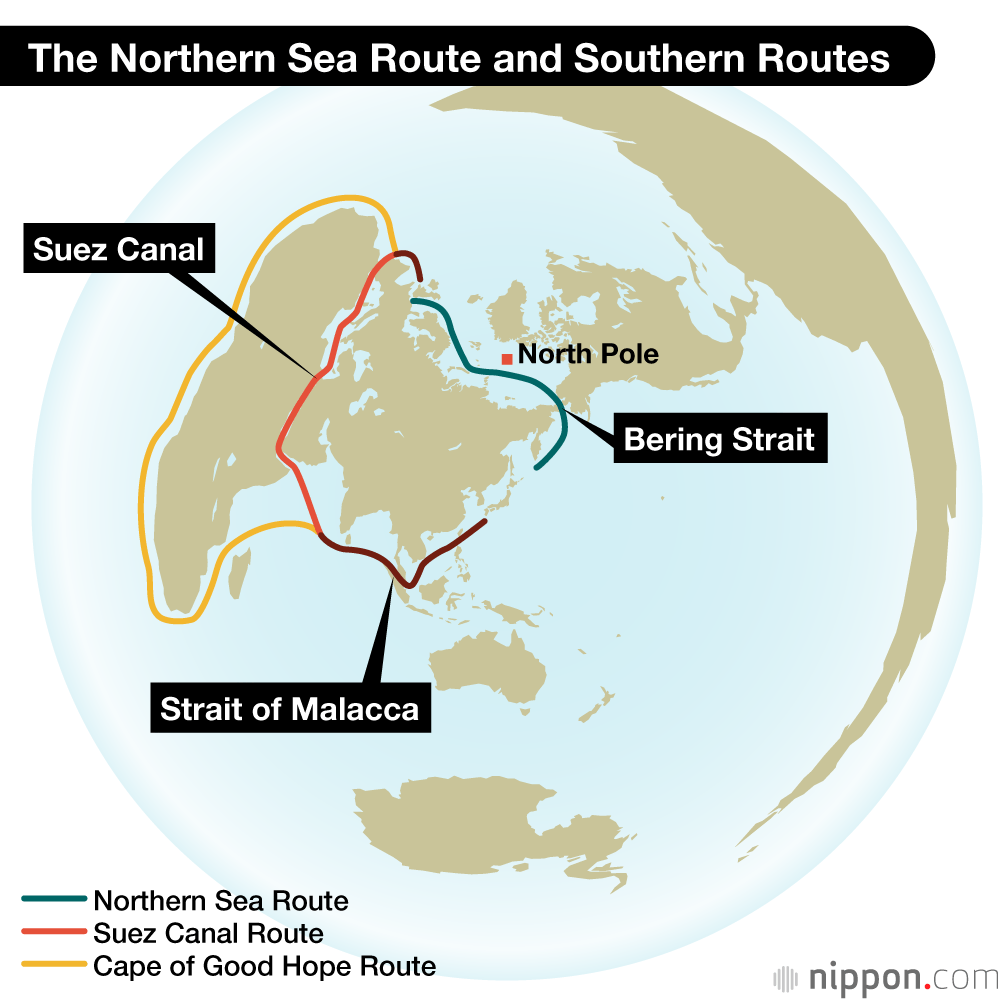 Matsuda offers this analysis of the Arctic route:

“It’s hard to run a shipping route that can’t be used year-round. There is also a fair bit of uncertainty in relying on Russian ice breakers for escort. There are still many issues to clarify, too, including escort booking and fees not being fixed until the passage actually takes place,” he says. “Current conditions make it doubtful that Europe-bound container ships will reliably use this route. The Northern Sea Route also lacks the intermediate ports that the Suez Canal offers, which reduces profitability. Right now, it’s hard to say this will serve as a new, useful route.”

What does Matsuda see as the challenges facing Japan as a maritime nation?

“Japan has suffered more from the container shortage than other Asian nations. Other issues are that Japan’s major export items are exactly the kind of business-to-business goods hit hardest by the pandemic, and the freight rates Japanese shippers pay have been kept lower than in other countries,” he says.

The rate issue is a key one, he explains. “After its long period of economic stagnation, Japan now has less than a 5 percent share of container cargo on routes from Asia to Europe or the United States. Now, because of the container shortage, we’re losing cargo bids to other countries that pay higher freight rates. More specifically, container cargo is often routed away from Japan to China, which pays relatively higher rates, so the containers are moving there.”

“As Japan’s economy continues to stagnate, consignors have been trying to get lower shipping rates to cut costs. Shipping companies still make an effort to carry Japanese cargo, but as the container shipping sector is a huge focus for investment, they can’t escape the losses those low rates bring,” he says.

Matsuda ends by emphasizing the necessity of domestic shipping companies for Japan. “It is important for Japan to shoulder the burden of maintaining those domestic shipping companies, both to keep our economy from falling behind the rest of the world, and out of simple safety concerns. We should also work to build a national consensus so we can compete on a level playing field with global rivals. In other words, I think we need to pay the attention, and the compensation, appropriate for a truly maritime nation.”

(Originally published in Japanese. Banner photo: A satellite image by Maxar Technologies of the Ever Given run aground in the Suez Canal taken March 29, 2021. © AFP/Jiji.)