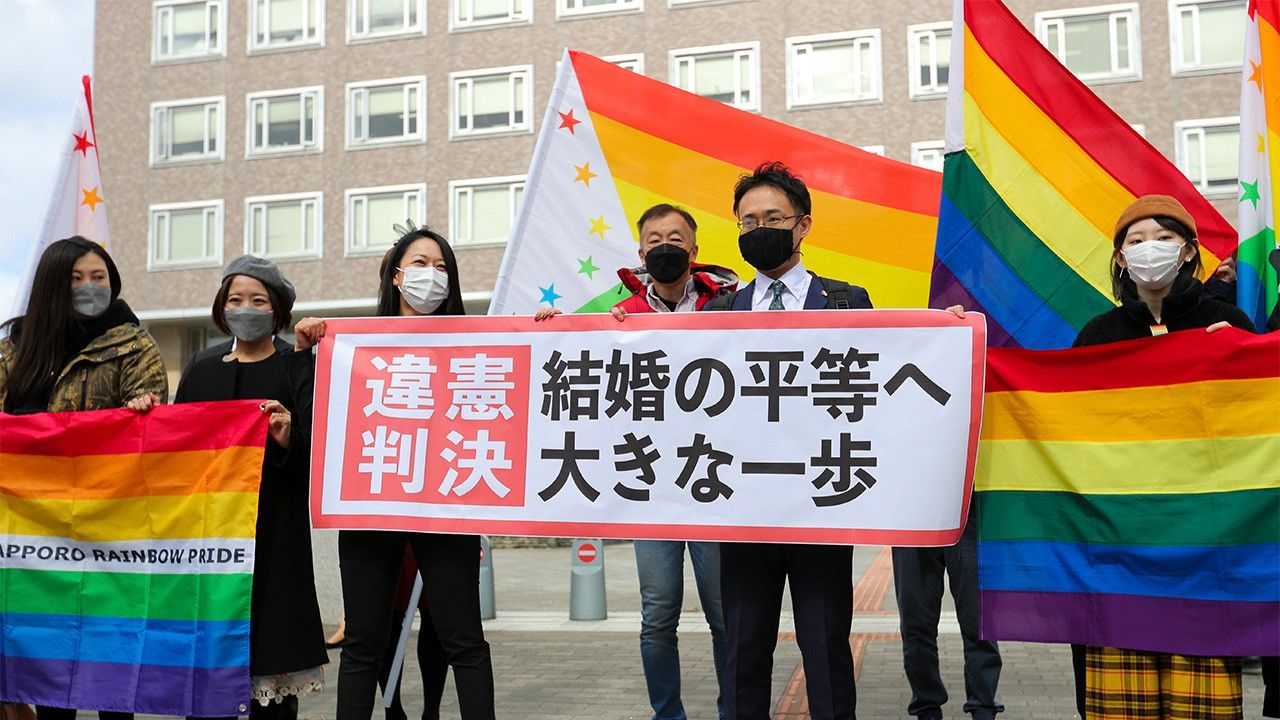 Society Family Jun 21, 2021
Japan is the only developed country where married couples must take the same surname. Opposition to changing Japanese marriage law is strong among conservative politicians, who still hold sway over social change. But recent lawsuits have challenged Japan’s obstinate approach to same-sex marriage.

A Rising Movement and a Backlash

In recent years, more people in Japan have been calling for amendment of laws to allow married couples to keep different surnames. Various local governments have adopted opinions urging the national government to consider the matter, and opinion polls indicate overwhelming support for this change. Yet, opposition groups are also expanding their efforts. On March 16, 2021, the Okayama prefectural assembly adopted a written opinion opposing optional different surnames for married couples, in possibly the first such move at this level of government in a decade.

Then, on April 1, members of the ruling Liberal Democratic Party launched a parliamentary group opposing the introduction of optional separate surnames, in which 144 Diet members or their representatives took part. Perhaps to avoid appearing contrary, the group obtusely described its aims as “promoting the expanded use of aliases,” whereby, for example, women use their maiden name in professional life although it is not their legal name.

Why do conservative politicians oppose the option for married couples to use separate surnames? People simply want the right to choose. Such change would not infringe upon the rights of people who wish to have the same surname (90% of couples adopt the husband’s surname). But opponents are trying to curb the freedom of people who want to take separate surnames. Why be so obstructive? They express fear that such change would undermine family unity, but ultimately this is up to individual families. It is perplexing how conservatives are so concerned about the private lives of others.

Interest in Japanese marriage law is also growing in relation to same-sex marriage. In 2015 Tokyo municipalities of Shibuya and Setagaya became the first to introduce systems to recognize same-sex partnership, boosting the visibility of same-sex couples in Japan. Similar systems have since been launched in 105 municipalities, encompassing over 37% of the national population as of May 6, 2021.

In 2019, lawsuits were filed simultaneously in five district courts around Japan claiming that the Civil Code violates the Constitution by not recognizing same-sex marriage, and seeking compensation for government negligence in amending the law. Previously, lawsuits filed by same-sex couples seeking legal protections included a Japanese citizen seeking residency status for a same-sex non-Japanese partner; a case seeking the right to compensation when the partner was a victim of a crime; a claim for transfer of assets from the next-of-kin of a deceased same-sex partner; and a case where one party sued a former same-sex common-law partner for wrecking their relationship. But the 2019 lawsuits are the first to directly adjudicate on the right of same-sex couples to marry.

On March 17, 2021, the Sapporo District Court, in its judgment of the first instance, ruled that the Civil Code violates Article 14 of the Constitution by denying legal protection to same-sex couples. But the court dismissed the plaintiffs’ demand for damages. Plaintiffs hope that these lawsuits will hasten revision of the law and expand the application of marriage to include same-sex couples. In that regard, the ruling that the Civil Code is unconstitutional was a significant win, and a big step toward the realization of same-sex marriage in Japan. The plaintiffs have appealed the ruling, taking their battle to the Sapporo High Court. Eventually, it will likely reach the Supreme Court.

Initial judgments in Tokyo, Nagoya, Osaka, and Fukuoka are due later in 2021 or in 2022. Meanwhile, partnership systems are being introduced in more municipalities, and same-sex couples will only become increasingly visible. Public acceptance of same-sex marriage is also likely to grow. The rationale for differentiation due to sexual orientation is gradually being eroded, and the validity of the Diet’s constant negligence in taking legislative action is weakening.

But the LDP maintains its aversion to same-sex marriage. Conservative politicians obstruct optional separate surnames and same-sex marriage, claiming they would cause the collapse of the traditional family.

A Wave of Change from Abroad

Film director Sōda Kazuhiro and film producer Kashiwagi Kiyoko married under New York state law, while retaining their respective surnames. But after their application to register their marriage in Japan was rejected, they filed a lawsuit in the Tokyo District Court. The judgment, handed down April 21, 2021, states that “Japanese law allows citizens to marry abroad under separate surnames,” ruling their marriage valid in Japan. Still, this did not enable them to enter their marriage in the family register under separate surnames, due to “procedural issues.”

This results in the coexistence of two systems of marriage in Japan: between Japanese people married in Japan with the same surname, and overseas marriages potentially with separate surnames, which, for now at least, cannot be recorded in Japan’s family register. How can couples who marry overseas with separate surnames live as a married couple after returning to Japan? If they are not legally registered in Japan, it creates irregularities with official status according to the family register, which itself changes the concept of family.

Presently, only Japan forces married couples to adopt the same surname. There is no evidence from overseas that using different surnames leads to the collapse of the family. The experience of other countries demonstrates that surname use has no bearing on the matter.

Already 29 countries, in Europe, North and South America, Africa, and Oceania have eliminated legal differentiation in marriage according to sexual orientation, effectively legalizing same-sex marriage. The list is constantly growing; Taiwan approved same-sex marriage in May 2019. In Taiwan, 5,871 same-sex couples (4,088 female, 1,783 male) had married by the end of April 2021. Same-sex marriages accounted for 2.2% of all marriages in 2019, and 2.0% in 2020. The introduction of same-sex marriage has essentially led to a 2% increase in marriages.

There have been no reports of the collapse of the family in countries where same-sex marriage was legalized. The addition of, at the most, a number equivalent to 2% of same-sex married couples has not shaken the foundations of the family unit. Successful implementation in so many countries has clearly disproven this.

A further inconsistency has arisen with same-sex non-Japanese couples, married abroad, who moved to Japan to live. When one partner obtains a work visa, the Japanese government has granted the visa status of “Designated Activities” to the spouse, allowing them to live together in Japan. Essentially, the government treats foreign same-sex couples as a family unit. The Ministry of Justice approved at least 93 such cases from 2013 through 2020.

But if a Japanese person marries a foreign same-sex partner overseas, the spouse is not entitled to receive residency based on wedded status. The refusal of recognition results from the application of Japanese law to the Japanese partner. But there is an obvious inconsistency here, where spouses of foreign citizens receive preferential treatment to those of Japanese citizens.

Regarding optional separate surnames for married couples and same-sex marriage, the international community, or at least advanced countries, has already set the standard. With people increasingly living and working abroad, we will see more cases that challenge Japan’s stance on marriages that are legal in other countries. Already, we are seeing instances where same-sex marriages or unions under separate surnames are being officially recognized in Japan, to a certain extent.

In the issues of optional separate surnames or same-sex marriage, what makes conservatives so obstinate? These people generally do not reveal the heart of their assertions, but it seems to be a desire to retain the patriarchal family power structure, where a man controls his wife. Separate surnames for married couples signifies equality between the sexes. If same-sex partners are permitted to tie the knot, marriage will no longer necessarily be an apparatus whereby men control women.

Essentially, the main opponents of change cling to the relic of the prewar family structure. The many LDP female parliamentarians who endorse such conservatism are no doubt also aware that they leveraged inequality between the sexes to hoist themselves into their current positions.

The majority of Japanese people, especially the young, believe marriage to be an equal partnership forged between two individuals. If they want this reflected in law, they have no choice but to vote accordingly. Making the effort to vote is the key to addressing this long overdue issue.

Whichever way you see it, Japan’s stance is feeble. The time for action has come.