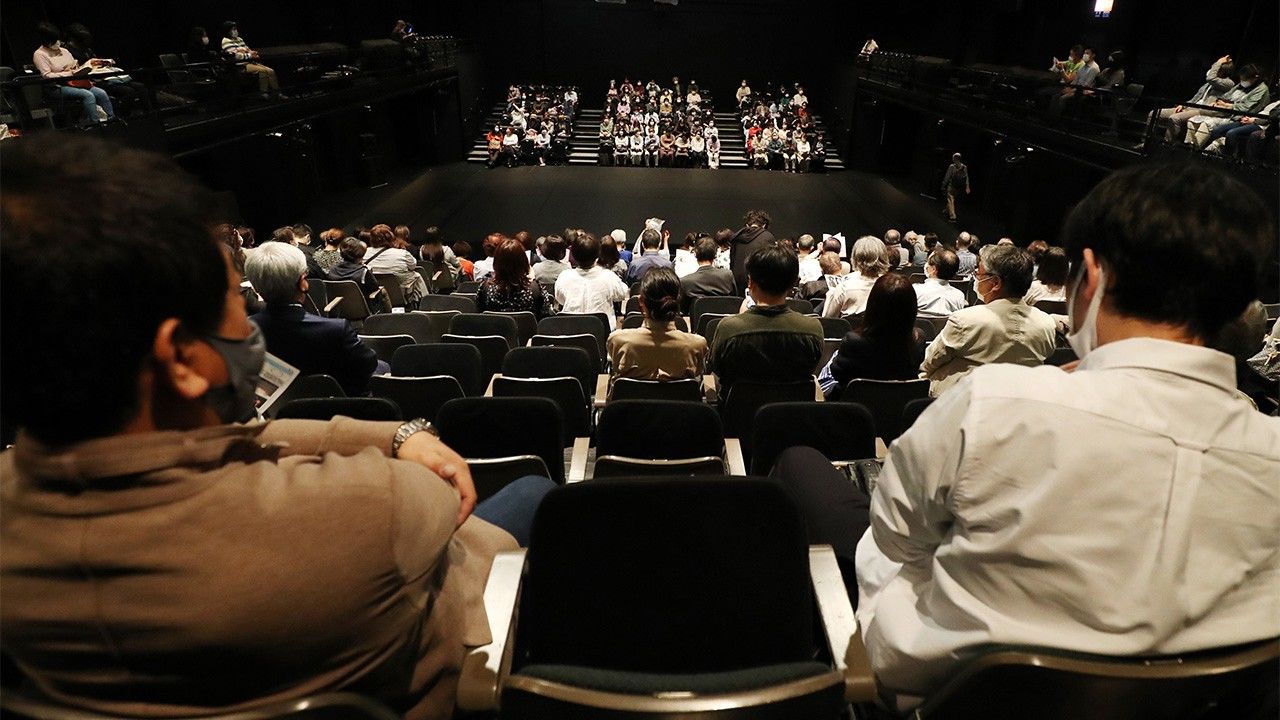 At a Crossroads: Rethinking the Importance of Arts Funding in the COVID-19 Age

Culture Society Arts Jun 29, 2021
As exhibitions, plays, and concerts are postponed due to coronavirus, those working in the sector continue to struggle with restrictions on audiences. What forms of support have been made available to artistic and cultural endeavors during the pandemic, and what conclusions can we draw about issues in cultural policy and the relationship between the arts and society?

In Japan, many types of support are available to cultural and artistic endeavors, which have been severely affected by COVID-19. Notably, this is not limited to financial support from the national government and local bodies, but also includes donations from private companies and individuals. The pandemic has also prompted an increase in independent activity by those in the arts and culture scene, as well as an increase in various networking initiatives for the sharing of ideas and expertise.

In late April 2021, the Agency for Cultural Affairs announced the details of its new Arts for the Future support program. While fiscal 2021 had already started, Arts for the Future was funded out of the government’s third supplementary budget, which was approved in fiscal 2020, covering the period through March 2021. As the Japanese public kicked off Golden Week—the stretch of national holidays from late April through early May—under a state of emergency, many in the art, cultural, and entertainment sectors were preparing to apply for this subsidy.

The ¥50.9 billion included in the Agency for Cultural Affairs’ program to support the continuation of artistic and cultural endeavors is the centerpiece of the Emergency Comprehensive Aid Package for Cultural Art Activities included in the government’s fiscal 2020 second supplementary budget, and is equivalent to around 50% of the Agency’s annual budget. In addition to the large amount of money it allocates, this support program is notable in that it directly funds individual freelance artists, managers, and technicians who are not affiliated with an artistic or cultural groups. Previously, with the exception of the Agency for Cultural Affairs’ overseas training scheme for up-and-coming artists, the grant schemes offered by the Agency did not allow individuals to apply for grants directly, and rather paid grants on an establishment basis. Behind the Agency’s decision to directly support artists and related workers in Japan, of whom there are an unknown number, is the fact that cries for help from artists were growing by the day, which likely made the authorities decide that prompt financial aid was essential.

Faced with the current state of Japan’s arts scene, which is supported by the work of many freelance artists and support staff, the government’s decision to contact individual artists and attempt to address individual needs is significant in terms of the outlook for Japan’s cultural policy, I believe. If applied properly, this initiative will enable policies suited to the demands of artists and the current climate to be implemented smoothly, although if it is abused, it could end up creating a form of censorship. I believe there is a need for more scrutiny of the relationship between the arts, culture, and the public sector.

Government Puts Its Money Where Its Mouth Is

When the Agency for Cultural Affairs first began accepting applications for the grants to ensure the continuation of cultural and artistic activities, the complexity of the scheme and applicants’ lack of experience in applying for such grants created many clashes between applicants and grant administrators, causing some applicants to become frustrated or dissatisfied. At the same time, many people were able to obtain assistance without difficulty, and in the Kansai region where I am based, the scheme has enabled many appealing and creative, albeit small-scale, exhibitions and performances to go ahead. These events often make you appreciate how artists are committed to trying out new things in order to keep creating and showcasing their art in trying circumstances.

I will now provide a summary of the details and budgets of the Agency for Cultural Affairs’ main COVID-19 support schemes, including the grant to ensure the continuation of cultural and artistic activities.

Agency for Cultural Affairs Covid-19 grants open to the public

Some entertainers and other artists would also have taken advantage of the Japan content Localization and Distribution live entertainment subsidy (¥87.8 billion), the business continuation grant (¥5.7 trillion), or the Ministry of Health, Labor, and Welfare’s employment adjustment subsidy (¥2.2 trillion).

By way of comparison, in response to the pandemic, the German government established a $1.2 billion cultural fund, while the UK government contributed $2.1 billion toward supporting theater and live music venues. Simply comparing the amounts committed to art-focused subsidy schemes might suggest that Japan spent too little on the arts when compared with Europe. However, when one considers that Japan is one of the most indebted of the industrialized nations, the government deserves credit for committing an unprecedented level of support for arts and culture in its supplemental budgets.

Culture Is Essential for Democracy

A speech delivered on May 9, 2020, by German Chancellor Angela Merkel made waves in the Japanese cultural sphere. Declaring the survival of a diverse cultural environment her government’s top priority, Merkel announced a policy under which it would compensate for losses incurred as a result of event cancellations, as well as supporting freelance artists with ongoing expenses, including workplace costs and rent. Merkel justified the package by giving her views on the importance of art to society.

This statement by the leader of the country on how she sees art must have been very encouraging for artists and their affiliates working in Germany. Indeed, as German authorities moved last year to extend support to artists based in Germany irrespective of their nationality, an artist friend of mine said €9,000 was deposited into her bank account the day after she applied for aid.

Around the time that Merkel made her speech, Der Tagesspiegel printed an interview with Germany’s federal commissioner for culture and the media, Monika Grütters, entitled “Culture is Essential for Democracy.” In the interview, Grütters says:

“Since 1945, Germany has walked a difficult path, expressing its respect for democracy by elevating it in its constitution. Behind this was a conviction that it was artists who, by questioning everything, being highly creative and experimental, and exposing contradictions, invigorate public discourse and protect democracy from political apathy and totalitarian tendencies.”

Learning about the German situation made me feel that, despite the political posturing present in these statements, there are fundamental differences between Japan and Europe in the perspective taken on cultural policy, rooted in ideological differences—views on the role of art in society, for instance, and on the significance of society for art. Many in Japan think of art as “nothing to do with me,” merely viewing artists as people indulging their interests. This attitude is also prevalent in government. This is precisely why this issue is often reduced to one of self-reliance, with considerable criticism directed toward the use of taxpayers’ money to support the arts and culture. Even more of a problem is the fact that some artists share this view.

Depending on how you look at it, there may be positive aspects to the Japanese approach, in that it does not impose restrictions on the artist. If all artists begin to believe that they are working for the benefit of democracy, it will be the end of interesting artworks. There are creators out there who, committed to remaining independent, have tried to make the best of a dire situation, which has led them to trying out new things. Many artists’ devotion to their creative endeavors has been unaffected by the pandemic. In any case, 2020 was an opportunity to consider the relationship between art and culture in Japan, and to focus on the intrinsic nature of these realms. However, with no opportunity to further this debate, it seems that this experience is simply going to be forgotten. In the absence of deeper analysis and debate of these fundamental questions, I do not believe it is possible to validly assert the necessity or importance of the arts in terms of their relationship with industry or the economy.

Hearing about developments overseas can introduce a negative bias and make one pessimistic about things in Japan. Seen overall, however, Japan compares respectably with its overseas counterparts in terms of support provided to artists. In addition to financial support for freelancers, organizations, and groups, support was provided in a variety of other ways, with many helplines set up and many information sessions and study sessions conducted. If anything, the issue was with the government’s approach to announcing policy and providing information. I believe that more people would have been happy if they had understood the entirety of the scheme and had the aims and background to the policy explained to them.

The cultural and arts sector continues to experience trying times. After repeated postponements and cancellations, some artists will have given up on their craft, no longer able to make ends meet. Others will have become demotivated and depressed by being labelled “nonessential.” I hope that all of us take the opportunity to consider the relationship between society and the arts, as well as our own relationship with art, so that we can apply the lessons learned about support for arts and culture during the pandemic in in our future endeavors.

(Originally published in Japanese. Banner photo: The New National Theatre of Japan’s first theatrical performance, held on May 12, 2021, after the ban on audience performances was lifted. @ Jiji.)