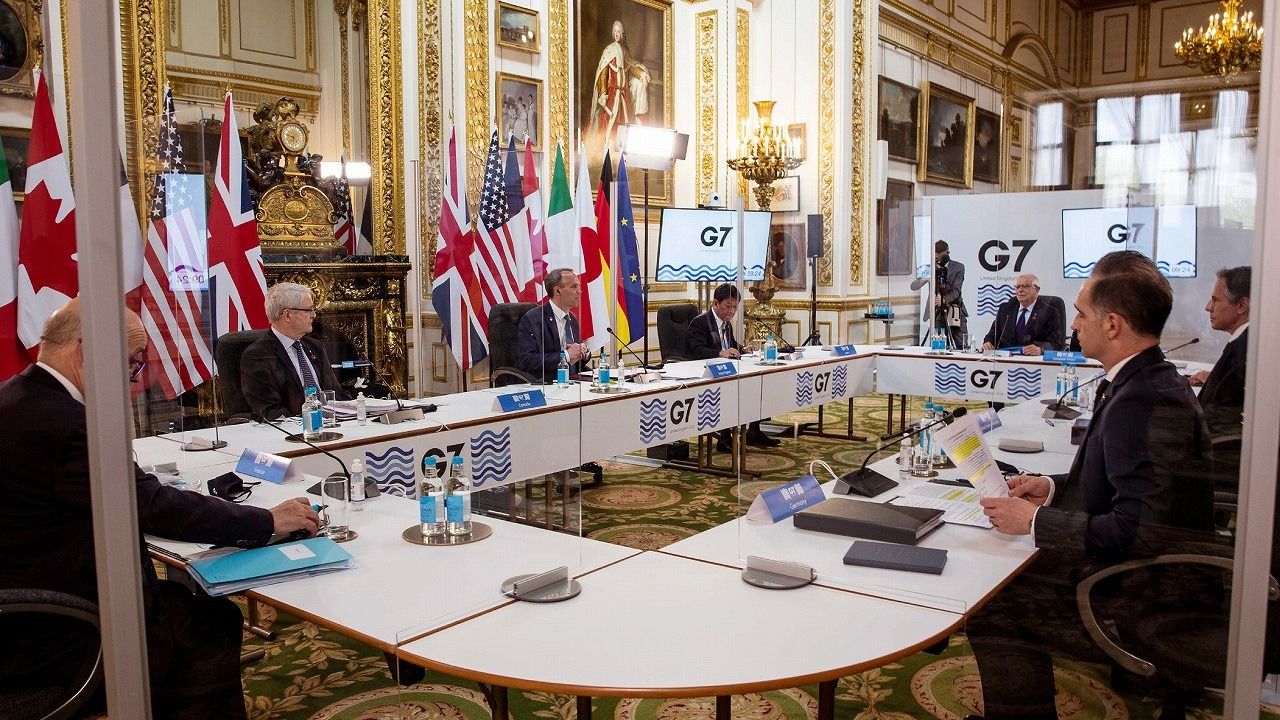 Getting in Step with Washington’s China Strategy: Toward an Integrated Security Policy

Politics Jun 7, 2021
The fledgling Biden administration has made it clear that former President Trump’s hardline China policy is here to stay—and that Japan has a key role to play in that strategy. Warning that Japan can no longer stay on the sidelines, the author calls on Tokyo to accept the responsibility and consequences of cooperating with Washington on matters of economic security as well as regional defense.

During its first four months, the administration of US President Joe Biden has had its hands full overseeing a massive COVID-19 vaccination drive and mobilizing government funds to rebuild and jump-start the US economy. Yet even amid these domestic challenges, it has been remarkably active on the diplomatic front. In part, this activity has been oriented to shoring up alliances and multilateral frameworks that were shaken by the norm-defying diplomacy of Biden’s predecessor, Donald Trump. But it has also taken aim at the challenge posed by repressive authoritarian regimes in general and by China in particular.

Notwithstanding his criticism of Trump diplomacy, Biden has thus far shown a clear intent not just to maintain but to double down on the China policy of the Trump administration, which pushed Beijing to the top of America’s global strategic agenda.

A shift in China policy had already begun near the end of Barack Obama’s presidency, as policy makers, recognizing the limits of Washington’s long-standing “engagement” policy, began opting for tougher responses to Chinese cyberattacks and military activity in the South China Sea. But it was the administration of Donald Trump that expressly prioritized China as a focus of US global strategy. The National Security Strategy adopted in 2017—echoed by subsequent statements on the Indo-Pacific—clearly articulated Washington’s perception of China’s rise as a matter of global as well as regional concern.

It is a worldview shared by top officials and advisors in the Biden administration. As they see it, the problem with China’s growing power is not simply that it threatens US supremacy but also that it has the capacity to forcibly alter the regional balance of power and reshape the international system.

The Biden administration set forth its views on China in the Interim National Security Strategic Guidance that it released on March 3 in an unusual move to outline its security priorities as quickly as possible. Calling China “the only competitor potentially capable of combining its economic, diplomatic, military, and technological power to mount a sustained challenge to a stable and open international system,” the document warns of challenges from anti-democratic powers that “use misinformation, disinformation, and weaponized corruption to exploit perceived weaknesses and sow division within and among free nations, erode existing international rules, and promote alternative models of authoritarian governance.” It affirmed its determination to “prevail in strategic competition with China or any other nation” and to “lead and sustain a stable and open international system.”

Biden’s foreign policy differs from Trump’s in its emphasis on democracy versus autocratic government, a theme that appears time and again in the president’s own speeches. Biden has also stressed a collaborative approach, criticizing Trump’s “my way or the highway” attitude toward US friends and allies. But in terms of their perception of China, the similarities outweigh the differences.

Biden has also inherited his predecessor’s emphasis on economic security measures, especially those aimed at maintaining American dominance with respect to critical or sensitive technologies. The Trump administration set the direction with the 2018 Export Control Reform Act and Foreign Investment Risk Review Modernization Act. Officials in the Biden administration have made it clear that the government will continue to leverage these tools to protect American technology and safeguard the nation’s security infrastructure. Amid mounting US-China tension, Washington has shown a growing tendency to treat trade and technology as integral aspects of national security, and this approach continues under Biden. Meanwhile, the COVID-19 pandemic has sharply raised Washington’s awareness of the need to diversify and reshore American supply chains, from the standpoint of security as well as economic revitalization. Congress has been consistently supportive of measures to promote such a shift.

The interagency China strategy developed by the Trump administration is likely to gather steam under Biden. At present, there are no high-level Washington players making the case for rapprochement, as former Secretary of the Treasury Steven Mnuchin did under the Trump administration. To be sure, Biden has held out hope for cooperation with Beijing on the issue of climate change, and US industry has warned that decoupling could cost American jobs. But these mitigating factors are insufficient to change the trajectory of US-China relations.

Despite the ongoing COVID-19 pandemic, the newly inaugurated Biden administration moved quickly to revitalize US diplomacy through a combination of virtual and in-person meetings, and the biggest focus of this activity has been China. Criticism of China featured prominently in the May 5 communiqué issued at the Group of Seven Foreign and Development Ministers’ Meeting in London. That outcome, along with the decision by the European Union to sanction China over human rights violations, suggests that the Biden administration’s values-driven diplomacy is a good fit with the current China strategy.

The G7 conference was preceded by several smaller meetings between the United States and key partners and allies in the Indo-Pacific, including the March 12 virtual Quad summit (Australia, India, Japan, and the United States), the March 16 bilateral “2+2” meeting of Japanese and US foreign and defense ministers, and the March 18 US–South Korea 2+2 conference. Japan has been a participant in most of these meetings. Where China is concerned, Washington understands that Japan has a critical role to play in almost any policy response requiring international coordination. It also knows that other countries in Asia and Europe share Japan’s dilemma of being strategically dependent on the United States yet economically dependent on China and are therefore watching to see how Tokyo responds to Washington’s calls for closer strategic cooperation.

It was no accident that Prime Minister Suga Yoshihide was selected as the first foreign leader to meet directly with Biden, or that the summit occurred just a few weeks after the rancorous US-China meetings in Anchorage, Alaska. Biden and his foreign-policy team fully understood the international impact of a clear declaration of support from Japan. The April 15–16 Japan-US summit was carefully planned as the culmination of the first phase of Biden diplomacy, with its sharp focus on China.

As expected, the Japan-US Leaders’ Joint Statement issued on April 16 echoed the March statement of the 2+2 ministers in stressing the two countries’ commitment to deepening defense cooperation. But the items of agreement that attracted the most notice were those pertaining to Taiwan, human rights, and economic security.

As regards the first item, much has been made of the reference to “peace and stability across the Taiwan Strait,” the first such mention in more than a half century of Japan-US joint leaders’ statements. The inclusion of this item unquestionably represents a new acknowledgment of the alliance’s interest in a stable Taiwan and the critical importance of cross-strait peace and stability for the security of Japan.

That said, the April 2021 leaders’ statement contains nothing that fundamentally alters or contradicts Tokyo’s basic relationships with Beijing and Taipei, as established by the Japan-China Joint Communiqué of 1972 and other documents. Nor does it signal a change in the Japanese government’s position on contentious historical issues.

In terms of security policy, the April joint statement emphasizes the importance that both Tokyo and Washington place on the Taiwan Strait and suggests that they are exploring possibilities for cooperation; it would be unwise to read in anything beyond that. Unlike the reference to Taiwan in the 1969 leaders’ statement—predicated on concerns about a hypothetical cross-strait contingency following the reversion of Okinawa to Japanese sovereignty—the April 2021 statement does not establish a new basis for Japan-US military action. Washington has impressed on Tokyo the need to bolster deterrence, and the Japanese government has responded as positively as it can in the context of official statements. But this is at best a prelude to any concrete steps by Japan, or by the Japan-US alliance, to bolster defense capabilities with Taiwan in mind.

As noted above, the April summit also yielded significant agreement on human rights issues and economic security in relation to China. With regard to the second item in particular, the agreement went significantly beyond that articulated at the March 2+2 meeting. The April 16 joint statement cited China for economic coercion, unfair trade practices, and industrial subsidies. In addition, a linked fact sheet on the newly formed Japan-US Competitiveness and Resilience (CoRe) Partnership specified numerous areas of cooperation, including the development of secure and open next-generation communication networks, global standards development, nurturing and protection of secure supply chains for semiconductors and other sensitive technology, research on quantum computing, research integrity, and utilization of advanced technology to counter such global threats as infectious disease and climate change. In short, the partnership appears to cover virtually every major area of economic security that has been flagged in recent years.

Of course, it remains to be seen whether the Japanese government can successfully enlist the cooperation of industry and academia in such policy initiatives. Nonetheless, the April joint statement breaks new ground by addressing economic security head-on and establishing it as a key focus of the Japan-US alliance, alongside more conventional security concerns.

Time to Take a Stand

For the past four years now, Japan has been walking a tightrope, attempting to strengthen its security alliance with the United States while simultaneously repairing ties with China. On his 2018 visit to Beijing, then Prime Minister Abe Shinzō appealed for relations rooted in cooperation and mutual trust instead of rancor and rivalry. But we are past the point where Japan can strengthen ties with Washington and Beijing simultaneously. With the April 2021 summit, Japanese diplomacy has reverted to its natural posture of placing the alliance first and relations with China second.

Japan as a key political player in the region faces the task of determining how it should proceed in response to Beijing, a government that shows little respect for international rules, norms, and values. Recapturing the initiative will take resolve and commitment on several fronts.

First, we must ask ourselves what kind of world and international order we envision as we pursue policies to advance our national interests via economic and technological development. Reconciling the two considerations may not be easy, but we cannot ignore either one. To this end, government and private industry must stay informed and up-to-date about economic security issues. In the political arena, policy debate should be grounded in a clear-eyed appreciation of the harsh international circumstances created by the US-China rivalry.

Second, when coordinating with the United States and like-minded partners, we must be prepared for economic retaliation and other coercive behavior from Beijing. When the EU imposed sanctions over human rights violations in China, it carefully targeted them with a view to averting escalating counter-sanctions. Even so, China’s reaction was swift and sharp. We should not imagine that we can somehow escape a backlash from Beijing by making accommodations or mincing words. Rather, we must recognize the need for close cooperation with partners in order to minimize the impact of Chinese retaliation.

Last but not least, the Japanese government needs to admit Taiwan as an important player in the region and rethink its strategy accordingly. For years, Tokyo has bent over backwards to avoid the appearance of any official interaction with Taipei for fear of offending Beijing. Its self-imposed constraints have been excessive, inhibiting even thoughtful discussion of the topic. Meanwhile, Taiwan has taken its place as a thriving democratic society and a dynamic economy boasting some of the world’s top chipmakers. Today, no productive discussion about the future of East Asia can ignore the existence of Taiwan, and it is time the Japanese government acknowledged that.

(Originally published in Japanese. Banner photo: G7 foreign and development ministers at their conference in London on May 4, 2021, where China was a major topic of discussion. © Ministry of Foreign Affairs/ Jiji.)