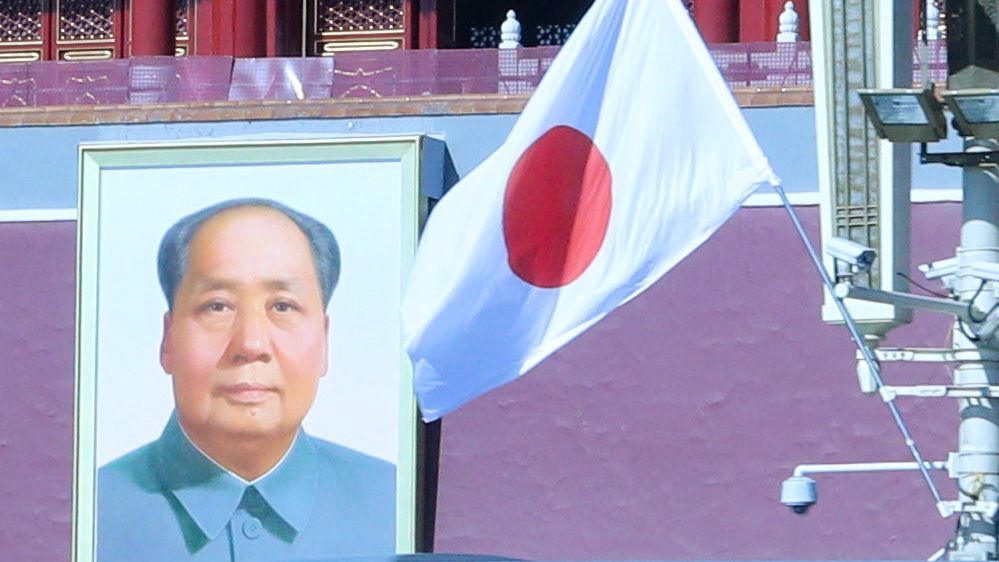 History Politics Aug 2, 2021
In the early postwar period, Japanese empathized and supported the Communist Party of China as representing the “power of the people,” but this gave way to pessimism and harsh judgment following the Tiananmen Square Incident of 1989. Now, most Japanese people are critical of China and view it as a threatening, increasingly autocratic challenge to the global order.

Orthodoxy in the “New China”

This year marks the hundredth anniversary of the Communist Party of China, or CCP. During its early years, until 1945, there was little awareness of the party in Japan. Following defeat in World War II, Japan was forced to disarm and to renounce military force. Meanwhile, China’s civil war between the Nationalists (KMT) and Communists was entering its final stage. Initially, the KMT, bolstered by the United States, enjoyed military supremacy. But in late 1948, the United States withdrew its support and adopted a non-interventionist policy toward the civil conflict, citing corruption in the KMT and economic turmoil. The mainstream Japanese view saw the CCP as the legitimate government of China, and there was much interest in CCP-led land reforms and labor-farmer movements.

Mao Zedong proclaimed the founding of the People’s Republic of China​ in October 1949. For many in Japan, the emergence of this new state—with the land reforms it implemented to elevate the working and farming classes and its victory over the US-backed Nationalist forces—gave it the image of a fresh “New China” wielding authority over a unified state.

Reports from demobilized Japanese former POWs, who had witnessed first-hand the activities of the CCP and its Eighth Route Army, especially around Yan’an, provided new insight into the contemporary situation in China and its future prospects. In Japan, imprisoned members of the Japan Communist Party were freed, and communist sympathizers repatriated from China joined the party. The CCP’s International Liaison Department and United Front Work Department led the deployment of “people’s democracy” in an effort to expand communism globally.

In the early days of the postwar occupation of Japan, the Supreme Commander for the Allied Powers issued directives and promoted pacifism, its focus on instilling Japanese people with remorse and a sense of responsibility for the war. It also strived to extol democracy and a critical view of militarism. The general mood supported new political parties, in particular the JCP, and social movements, many of which emphasized democratic revolution and postwar reform. The CCP also disseminated propaganda in Japan supporting demands for greater democratization and the overthrow of the emperor system.

Empathy from the Anti-US Left-Wing and Liberalists

The struggle grew between the emerging superpowers, the United States and the Soviet Union, accompanied by fear of military expansion. This gave rise to a new postwar order, the Cold War between East and West, and led to a reversal in SCAP occupation policy. With the north-south division of the Korean Peninsula, calls for a “red purge” spread in Japan, as they had in the United States. Progressive intellectuals advanced antiwar pacifism and unarmed neutrality, opposing a separate peace treaty (excluding China and others) and the US-Japan Security Treaty and advocating instead an overall peace deal, including the Soviet Union.

From 1953, the CCP clarified its socialist line. The JCP and other Japanese left-wing forces were also sympathetic towards socialism, owing to a shared anti-US stance and belief in independence and democratization. But the JCP lost face following its failure to achieve its aims through violent revolution. As a consequence, the CCP initiated a policy of people-to-people diplomacy alongside its “people’s democracy.” The Chinese Politburo devised a policy of action directed at Japan, proactively encouraging pro-China sentiment targeting China sympathizers and goodwill organizations in the political, business and cultural spheres. Citizen exchanges flourished, leading to an increase in Japanese supporters of the CCP not only in leftist ranks but also among liberalists.

On an international level, the 1955 Bandung Conference, which gathered mainly newly independent Asian and African states, signaled the emergence of vigorous nationalism. The CCP promoted itself as a third power, distinguishing itself from both the United States and the Soviet Union, through support for demilitarized, nonaligned neutrality, which appealed to intellectual critics opposed to the pro-US right wing.

In 1956, Khrushchev denounced Stalinism, causing tensions with China. Furthermore, Soviet Congressism led it to adopt a stance of peaceful coexistence with the United States, putting it at odds with China, which was engaged in an arms race with the United States, giving rise to factional antagonism within the international communist movement. The JCP also faced internal turmoil and cracks emerged within antinuclear pacifist organizations. China’s subsequent military aggression toward Taiwan and Tibet, and its nuclear test in 1964 marked the self-destruction of the peaceful image the CCP had hitherto cultivated.

But with the impending revision of the Japan-US security agreement in 1960, the CCP launched its first large-scale campaign opposed to Japanese re-militarization. The JCP and many other leftist groups in Japan expressed empathy with the CCP, owing to their desire to atone for Japan’s invasion of China and their advocation of the restoration of Sino-Japanese diplomatic relations.

Amid the Sino-Soviet tensions, communist parties worldwide tended to adopt an opportunistic approach in their stance on the Soviet and Chinese lines. In 1965, a coup attempt took place in Indonesia, led by the so-called September 30 Movement. It was blamed on the Communist Party of Indonesia, the largest in any nonsocialist country in the world, leading to a large-scale purge of party members and sympathizers. The JCP, which had hitherto held a compromising attitude towards the CCP while asserting its autonomy, broke ties with the CCP the following March, cementing China’s global isolation.

People around the world responded to his call. The impact was particularly deep in Japan. The JCP immediately expelled all the pro-Chinese elements in the party. But the new left, unaligned with the JCP, and a number of student activists expressed support for the Cultural Revolution. The object of their empathy was not the CCP, whose advocation of armed struggle had left it dysfunctional, but rather the charismatic leaders of the Cultural Revolution, Mao Zedong and Lin Biao. China’s Cultural Revolution was a youth-led, urban struggle, centered on the Red Guards, a student-led paramilitary movement, whose dramatic overthrow of the older generation and established powers proved intoxicating.

Meanwhile, the early 1970s was a high-growth phase for the Japanese economy, providing higher personal income, household affluence, and leisure time, creating a mass consumer society and leading to a decline in student protests. The suspicious death of Lin Biao in 1971 dampened respect and support for the Cultural Revolution among Japanese intellectuals and students. Then the 1972 Asama-Sansō hostage crisis, instigated by the extremist United Red Army, brought about the rapid demise of the new left movement.

That year also saw the normalization of relations between Japan and China and a shift from the focus on citizen exchanges to official diplomacy, with significant restrictions on private exchange. Following the restoration of diplomatic relations, debate on China became dominated by observers who distanced themselves from the CCP and analyzed matters in a level-headed and objective manner. 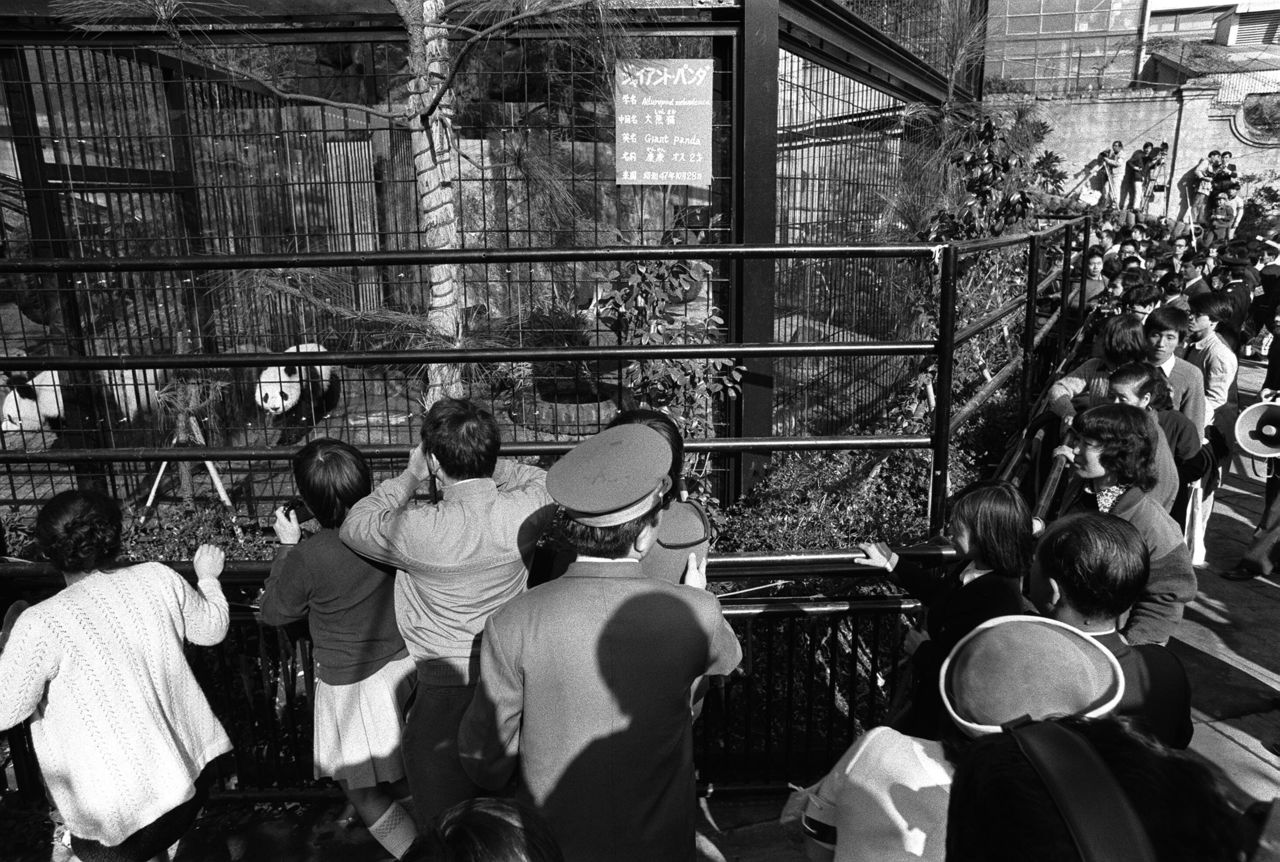 A pair of giant pandas sent to Japan to commemorate the normalization of Sino-Japan relations. It hatched “panda mania” in Japan, forcing Ueno Zoo to limit entry to control the crowds. Taken at Tokyo’s Ueno Zoo on November 5, 1972. (© Jiji)

A Realistic View of China

The passing of Mao Zedong, Zhou Enlai, and other members of the first generation of revolutionaries brought an end to the Cultural Revolution, ushering in an era of reform and liberalization from 1978. It shed light on the reality of China’s internal affairs and revealed the true thoughts of its people. With the pretense of propaganda removed and its true nature exposed, Chinese society proved to be relatively undeveloped, and quite different from the policies and proclamations of the CCP.

From the mid-1980s, power passed to the second generation of leaders, including Hu Yaobang and Zhao Ziyang. Intellectuals and students began proposing new concepts for reform. Disillusioned with the Cultural Revolution and disappointed by the reality of Chinese society, Japanese media and intellectuals expressed strong sympathy with these developments, and were highly critical of suppression by the CCP leadership in the June 1989 Tiananmen Square Incident, an event evoking strong pessimism toward China.

But Japan lifted economic sanctions and embarked upon restoring relations ahead of advanced Western nations. Deng Xiaoping’s widely publicized tour of southern China led to the resumption of reforms, brought about a rapid recovery for China’s economy, and encouraging greater optimism. China emerged from global isolation, increasing its presence and influence, but its rapid rise to power was seen as a threat by many in Japan. China analysts and scholars began to realize they could not gain the full picture of China by focusing only on the actions of central CCP leadership. They endeavored to grasp the multifaceted, long-term factors behind China’s change going beyond politics, including economic and social elements, as well as regional trends outside of Beijing.

At the end of the 1980s, Japan’s rapid economic growth came to a halt. As the population enjoyed the fruits of affluence, it also saw the spread of individualist and conservative sentiments. The 1990s saw Japan’s economic bubble burst and marked the start of its “lost decades.” Japan’s Self-Defense Forces, which had been dedicated to domestic defense, began to provide military support abroad. The “lifestyle conservatism” felt by the Japanese people, namely their satisfaction with their lives and unwillingness to push for societal change, shifted them further to the right, producing xenophobic sentiment.

Conservative forces in the spheres of politics and education, particularly historical academia, came to reject the remorse for Japan’s aggression and colonial rule in Asia. This was based on a critical historical view of Japanese militarism, an excessive focus on which they considered to be “masochistic” and distorted by the Tokyo War Crimes Trial. People in Japan began to call for censure of the tyranny of the CCP and its stance on historical, territorial, security, and human rights issues.

With its ongoing strong economic growth, China’s GDP surpassed that of Japan in 2010, and the country seemed to outstrip Japan in terms of national power. Since then the total value of Sino-Japanese trade has grown exponentially, leading to greater interdependence. But there is also a growing sense of estrangement between the two countries. We are witnessing the development of anti-China discourse, not only in right-wing circles, but also on the left, with growing criticism of despotism in the CCP. Currently, the Chinese communists are increasingly viewed as a menace, and the image of China as a great power is accompanied by fear that Japan will be absorbed by its giant neighbor.

The CCP now leads the entire country as the sole governing party controlling all national affairs. But Chinese society and the lives of its citizens defy the ideology and state policy, retaining its unique history, structures and principles. The 1980s and 1990s saw the development of a multifaceted approach to China research, following the Cultural Revolution and the Tiananmen Square Incident. But focus is now fixed entirely on analysis of power within the CCP leadership and on national policies, and both research and media are dominated by criticism of its despotism.

Public opinion polls indicate a steadily worsening image of China among the Japanese. Contemporary China is only seen through the framework presented by Japanese media. What is needed now is greater focus on its micro aspects, revealing society and life through the experiences of Japanese people living in China.

(Originally published in Japanese. Banner photo: The Japanese flag is raised in Tiananmen Square on the occasion of a visit by Prime Minister Abe Shinzō on October 26, 2018. © Jiji.)