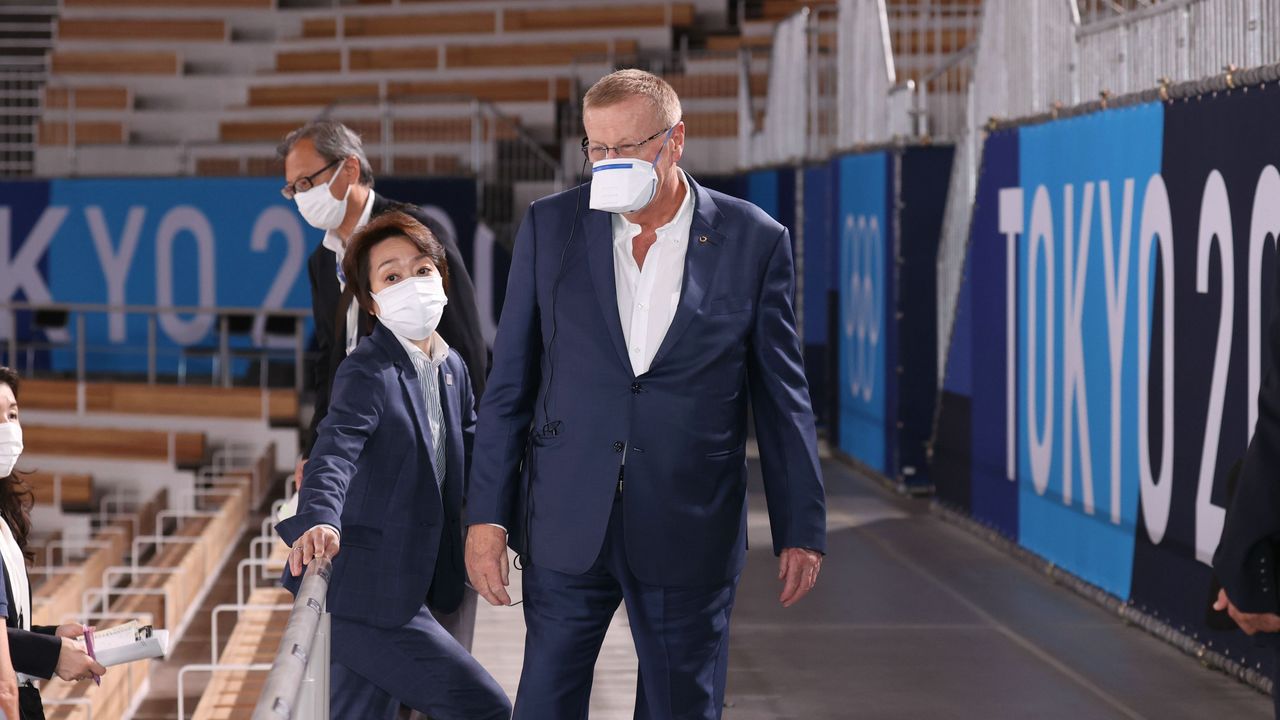 Extent of IOC Influence Revealed as Tokyo Counts Down to Games

Tokyo 2020 Sports World Jul 13, 2021
A resurgence in COVID-19 infections has resulted in a total ban on Olympic spectators by the Tokyo 2020 committee. Aloof from these developments is the IOC, which has consistently ignored popular opposition to the games and now plans to use its contract with the host city to force the Japanese authorities to go ahead with the games, like it or not.

On June 21, five-party talks were held to decide the maximum number of spectators at Olympic events. International Olympic Committee President Thomas Bach, International Paralympic Committee President Andrew Parsons, Tokyo 2020 President Hashimoto Seiko, Tokyo Governor Koike Yuriko, and Olympic Minister Marukawa Tamayo participated in the online discussion. In his opening remarks, Bach told the other attendees he was “looking forward to” hearing how many spectators they had decided to allow, thereby assuming the role of an observer rather than taking a proactive role on the issue himself. Bach then said in reference to the opening of the games, “I can only say, ‘here we go . . . and we are ready.”

All revenue from ticket sales goes to the Tokyo 2020 committee. The IOC, on the other hand, gets most of its revenue from broadcasting rights. For the IOC, what is important is not whether there are spectators in the stands, but that the games go ahead and are broadcast to the entire world. Broadcasting rights make up around 70% of the IOC’s revenue, and major American network NBCUniversal has paid $12 billion for the rights to all Olympic tournaments from the 2014 Sochi Winter games through to the 2032 Summer Olympics. NBCUniversal CEO Jeff Shell, whose network plans to broadcast an unprecedented 7,000 hours of coverage of the Tokyo tournament, is bullish, saying Tokyo could be NBCUniversal’s most profitable games ever and that “once the Opening Ceremony happens, everybody forgets [concerns like COVID-19] and enjoys the seventeen days.” Shell’s optimism is likely due to the prediction that the COVID-19 pandemic will boost ratings as more viewers stay home.

Some 4 billion viewers are expected to tune in for the games globally. This extraordinary audience gives the IOC control over not just broadcasting rights but also global sponsorship rights, all of which are covered by contracts worth massive amounts. The cancellation or postponement of the games could therefore make the IOC liable to pay damages. That is why the games must go ahead no matter what, and is behind IOC Vice President John Coates’ response when was asked if the games would go ahead even under a state of emergency. “The answer is absolutely yes,” said Coates, in a remark that earned him scorn.

Notable was the surprising comment by longtime IOC member Dick Pound in an interview with Shūkan Bunshun that even if Prime Minister Suga Yoshihide were to call for the games to be cancelled, that would merely be a “personal opinion”—the competition would still go ahead. Pound was not merely saying that politics and sports don’t mix. Rather, he was making an aggressive statement that, even in the midst of a global pandemic, the right to decide whether the games will go ahead lies with the IOC, which will not be influenced by the leader of the host nation.

Last year, when the decision was made to postpone the games, attention focused on the IOC’s host city contracts with the Tokyo Metropolitan Government and the JOC. Amid speculation that the games would be cancelled, then Prime Minister Abe Shinzō persuaded the IOC to postpone the games, which was not an option in the contract. This year, attention again focused on the host city contracts, this time regarding the amount of compensation that would need to be paid in the event that the games was called off again. Article 66 of the agreement, “Termination of Contract,” stipulates that the authority to call off the games lies with the IOC, and contains the following clause:

In case of withdrawal of the Games by the IOC, or termination of this Contract by the IOC for any reason whatsoever, the City, the [National Olympic Committee] and the [Organizing Committee for the Olympic Games] hereby waive any claim and right to any form of indemnity, damages, or other compensation or remedy of any kind and hereby undertake to indemnify and hold harmless IOC Indemnitees from any third party claims, actions or judgements in respect of such withdrawal or termination. It is the responsibility of the OCOG to notify all parties with whom it contracts of the content of this Section.

In effect, the Tokyo government is basically providing facilities, roads, and venues for an IOC event. It was the Japanese government that put in the host city bid, so if the Japanese side decides to forfeit their right to host the games, the IOC will likely demand significant damages from the Japanese side . The IOC itself, however, would not incur any damages. Some refer to the host city contract that outlines this relationship an “unequal agreement.”

The Los Angeles Pivot to Commercialism

It was during the term of Juan Antonio Samaranch, two leaders before Bach, that the IOC’s powers grew. Samaranch was the IOC’s seventh president. Leading the Committee from 1980 until 2001, he took the organization down a commercial path and was committed to turning the Olympics into a business.

It all started when the IOC introduced a one sponsor per industry rule at the 1984 Los Angeles games, producing a tournament financed by private enterprise that did not rely on money from taxes. After the success of Los Angeles, Samaranch launched a global sponsorship program known as the Olympic Partners (TOP) program, which began with the 1988 Winter Olympics in Calgary, followed by the 1988 Summer Olympics in Seoul. Prospective Olympic sponsors would make a pilgrimage to IOC headquarters in Lausanne, Switzerland to ingratiate themselves with Samaranch, with many Japanese corporations joining the line as well. Visitors to an Olympic Museum that was constructed in Lausanne in 1993 will see the stone blocks, each bearing the name of a corporation that made a donation toward the museum’s construction, arranged to form a “sponsor wall.” Each block is said to have cost $1 million. It was this corporate sponsorship that the IOC used to turn the Olympics into the bloated commercial institution it is today. A stream of governments and major urban centers submitted bids to host the games, hoping to gain influence and prestige.

It its early years, the IOC was dominated by members of the aristocratic class, including its founder Pierre de Coubertin, but Samaranch’s presidency marked a change to a mercenary organization. A recent article in the Washington Post may have referred to Thomas Bach as “Baron Von Ripper-off,” but Bach is in fact not at aristocrat, but a German lawyer.

Future of Olympic Movement at Stake

When considering the IOC’s relationship with host cities, one is reminded of the case of Oslo, which withdrew its bid to host the 2022 Winter Olympics. Immediately after the city’s 2014 announcement that it was dropping its bid, Western media published reports of the IOC’s demands for entertainment. According to reports in Newsweek and other publications, the IOC demanded that Oslo arrange a reception with the Norwegian king before the games, as well as a postgames function, at the expense of either the royal family or the Committee, separate lanes for the cars of Committee members, a welcoming reception at the airport for the IOC president, a variety of alcoholic drinks to be made available at the opening and closing ceremonies, wine and beer at venue lounges during competitions . . . the list goes on. The IOC’s demands made Oslo skeptical and eventually caused it to withdraw its host city bid, which would have seen it foot a large bill. While the details of the Tokyo entertainment arrangements are undisclosed, we do know that IOC members will be put up in five-star hotels in Akasaka and Roppongi. One wonders how the IOC can believe that the future of the games is secure while demanding perks like this that would be inconceivable for the masses.

On June 23, one month out from the games, Canada’s CBC published a story entitled “Ready or not, the Tokyo Olympics will happen in 1 month.” The article quotes Japan-based journalist and translator Michael Plastow, who says that the games will inflict long-term damage on the Olympic movement, which seeks to further the Olympic spirit: “This is going to be a party without festivities, and the whole financial and publicity debacle will surely further reduce the already declining motivation of countries all over the world to bid for the Olympics ever again.”

Tokyo 2020 President Hashimoto Seiko herself said at a press conference, “The challenge is to suppress the festive mood as much as possible. It will not be a festive event.” In order to reduce the risk of COVID-19 transmission, there is a need to restrict the movement of people. The atmosphere will definitely not be one of celebration and revelry.

The previous round of measures implemented in Tokyo to prevent the spread of coronavirus expired on July 11; two days earlier, though, the government implemented another state of emergency, to run from July 12 through August 22, encompassing all of the Olympic Games. On the same day, the Tokyo 2020 committee decided to ban all spectators from most of the Olympic venues, including all locations in Tokyo. One is forced to wonder what kind of message a celebration-free, socially distanced games sends to the world. As dark clouds loom in the form of the pandemic, the Olympics has lost its purpose and spirit as it faces an unprecedented crisis.