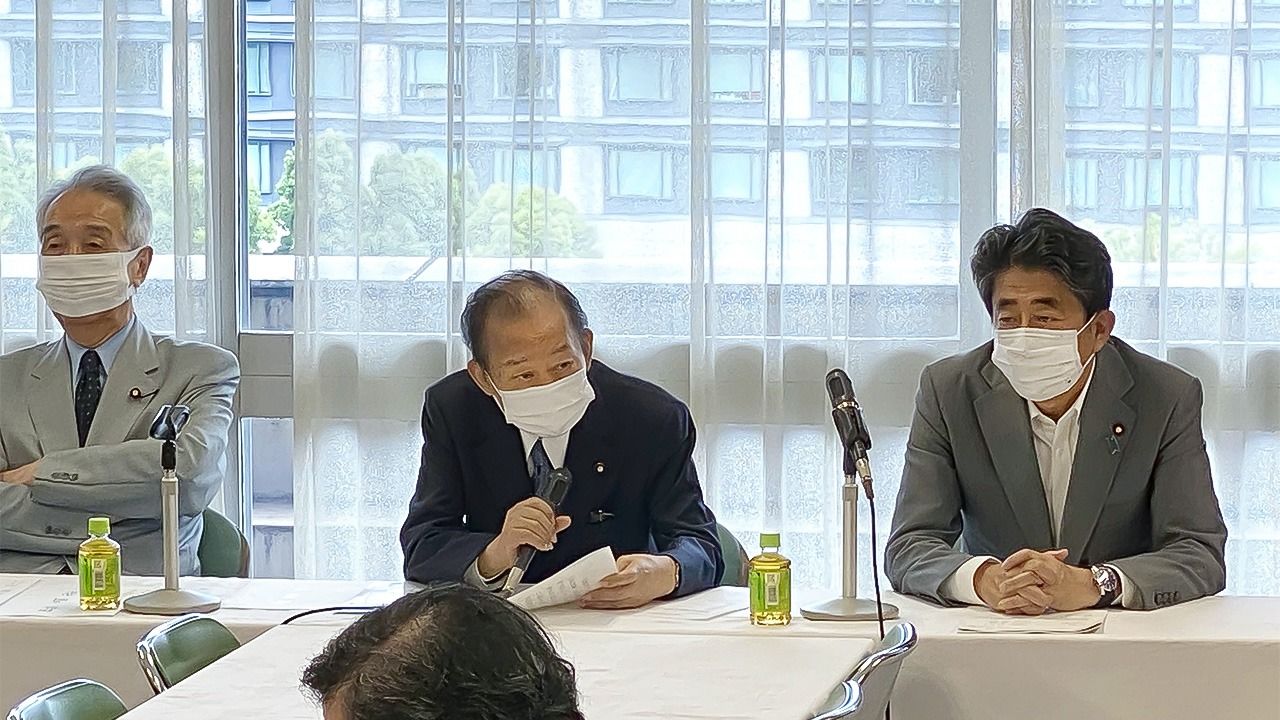 The 3A-2F War: The Veiled Election-Year Struggle Inside the LDP

Politics Aug 18, 2021
With the ordinary Diet session over, Tokyo’s focus turns toward autumn’s lower house election and the LDP leadership contest. As Prime Minister Suga Yoshihide continues his administration’s COVID-19 battle, the fate of his premiership is also increasingly tied to the outcome of a covert intraparty struggle focused on kingmaker Nikai Toshihiro’s future as LDP secretary-general.

The “3A” Bid to Make Amari Akira LDP Secretary General

It has been labelled the “3A-2F” war. On one side of this struggle inside the ruling Liberal Democratic Party, there is the “3A” grouping of former Prime Minister Abe Shinzō, current Deputy Prime Minister and Minister of Finance Asō Tarō, and Amari Akira, the LDP’s Tax Commission chair. On the other side is “2F,” or the second floor (nikai), a homophone for the surname of LDP kingmaker Nikai Toshihiro.

This rivalry has intensified through recent tit-for-tat launches of parliamentary associations. Both sides ostensibly claim to support the current prime minister, Suga Yoshihide, as he continues the COVID-19 fight and remain wary of feeding into perceptions that the ruling party is playing politics during a crisis. This wariness has not, however, stopped the conflict from quietly deepening ahead of September’s LDP presidential election, which effectively chooses the prime minister.

Media reports point to the confrontation centering on the party post of secretary-general, rather than who will be LDP president and the nation’s premier. The secretary-general position appoints personnel to key party positions and controls party funds. Nikai has already held the post for five years, an LDP record. Evidence of a struggle over the post recently became clearer as reports surfaced that the 3A camp wants to remove Nikai and replace him with Amari following the next LDP contest.

As the LDP president appoints the secretary-general, the two roles are inextricably tied to each other. This means the “3A-2F” struggle has potentially major implications for Prime Minister Suga, especially as it was Nikai who played a major role in engineering Suga’s ascension to the top job in autumn 2020. At that time, the 3As lacked a strong candidate of their own to take over from Abe, finding Suga an acceptable compromise. Suga’s administration from the start has, therefore, been built on a delicate balancing act between the 3A and 2F camps. While the 3As are not at this point committed to replacing the prime minister, the struggle could still undermine his leadership.

A Feud Laid Bare by Scandal

The background to this feud is a vote-buying scandal dating back to the July 2019 House of Councillors election. Kawai Anri’s election to the Hiroshima constituency was subsequently invalidated, but as the scandal unfolded, it was also revealed that LDP headquarters had provided Kawai with an unusually large sum of ¥150 million to support her campaign.

Comments in May this year around this payment ignited the feud. When quizzed on his responsibility for the payment at a press conference on May 17, Nikai denied any involvement. Nikai’s close associate. LDP Deputy Secretary-General Hayashi Motoo, followed up Nikai’s remarks by adding that “the chairperson of the election committee at the time was in charge of the Hiroshima campaign.”

That person was Amari Akira. It was as if Nikai, via the 3A grouping, was pinning responsibility for the ordeal on Abe himself and the strong push he initially gave to Kawai’s candidacy. Amari immediately and fiercely responded by asserting that there was not even “one micron” of involvement on his part.

Superficially, the issue was resolved by both Abe and Nikai taking responsibility as LDP president and secretary-general, respectively. However, this particular money issue only brought to the fore tensions that were already brewing in the background. The battle lines have been drawn around the 3A camp’s long-standing dissatisfaction with Nikai’s control over the use of LDP funds.

The Role of Parliamentary Associations

Parliamentary associations have played a critical part in this clandestine struggle. Set up only four days after Nikai’s and Hayashi’s incendiary comments above, one such association was Parliamentarians for the Promotion of the Semiconductor Strategy. Chaired by Amari, this group also saw Abe and Asō appointed to top advisory roles. At the beginning of the association’s proceedings on May 21, Asō grabbed the microphone and, in front of TV cameras, cheerfully counted out “A, A, and A—if all three of us are here together, there must be some kind of political intrigue behind this.”

With his comments practically begging for media coverage, Asō did not even try to hide that this “semiconductor strategy” group was little more than a front for internal party politics. Then on June 11, a group calling itself Parliamentarians for a New Type of Capitalism was established. LDP policy chief Kishida Fumio was appointed as chair and all the 3A members were initiated as advisors.

Kishida’s involvement also contained political significance. During his premiership, Abe had once considered Kishida to be his successor. Abe even considered appointing Kishida to the LDP secretary-general role to smooth his path to the premiership. After infuriating Nikai, however, Abe eventually decided against pushing the issue. While this further opened the rift between Abe and Nikai, it also strained the relationship between Nikai and Kishida. Naturally, Kishida is now allying himself with the 3As as he seeks to position himself as a post-Suga prime ministerial candidate.

Two Old Foxes Try to Outfox Each Other

Nikai did not lay down in the face of these challenges. On June 15, Nikai established his own Diet association, Parliamentarians for Furthering the Free and Open Indo-Pacific.

The twist here is that the Free and Open Indo-Pacific framing was taken directly from diplomatic messaging promoted by the Abe administration in its attempts to strategically counter China. Nikai, known within the party to be relatively sympathetic toward China, was likely deploying the FOIP concept to fend off intensifying criticism within the party and conservative circles that he was too lenient toward Beijing. Nikai informed Suga of this group’s establishment through his aide Hayashi and then, in a scrupulously thought-out move, surprised Abe by inviting him to become the chief advisor to this association.

Abe had no legitimate reason to refuse the invitation given his past FOIP advocacy. Smiling as he introduced himself to the group of 130 LDP lawmakers, Abe paid lip service to Nikai when he said with full ironic awareness that, “while I have taken on a number of advisory roles lately, I really wanted to be supreme advisor on this group.” Laughter could be heard from outside the meeting venue. This battle of wits between the two old foxes continued as they sought to outmaneuver each other.

What are these parliamentary associations that have suddenly attracted so much attention? Essentially, they are little more than informal groups of Diet members who devote their time to specific themes or issues. Like factions, these parliamentary associations are not governed by laws or LDP party rules. They differ from factions, however, in that they are generally not formed to further the political careers of their members or to support leadership candidates from within their ranks. Faction leaders also often take care of younger members, including providing financial support. Parliamentary associations also differ as they are often nonpartisan and can include members of the opposition. With membership fees coming to between ¥100 and ¥1,000 per month, the focus of such groups range from promoting international exchanges, such as the Japan–Korea Parliamentarians’ Union, to the implementation of specific laws and policies or promoting a specific industry, to even just providing a place for parliamentarians who share a hobby to socialize (such as an association for rakugo appreciation). Including dormant associations, there may be more than 1,000 such lawmaker federations.

Despite these associations being informal and loose groupings, there is a long history of them being used to alter the balance of power within the LDP and to capture influence over national politics.

Immediately coming to mind is the Diet Association for Breaking Through Crisis and Reform formed by Kajiyama Seiroku in 1998 during the Obuchi Keizō administration. Kajiyama, like Obuchi, was a member of the influential LDP group “Takeshita’s Seven Magistrates.” Including other political fixers such as Kamei Shizuka, this association was specifically formed to facilitate a conservative-conservative coalition with Ozawa Ichirō’s Liberal Party—a former member of the “Seven Magistrates” who had left the LDP.

The association’s formation was also part of the fierce battle for leadership within the LDP in the 1990s between conservatives such as Kajiyama and the LDP’s liberal wing, headed up by Katō Kōichi and Nonaka Hiromu, who had once facilitated the LDP’s coalition with the former Socialist Party. This confrontation, and the eventual triumph of the conservatives, would facilitate political realignment and play a major role in shaping the political direction Japan took in the new millennium.

Going back even further, the Utopian Politics Study Group comes to mind as another parliamentary association that would alter Japan’s political direction. Composed of younger LDP lawmakers, this study group was formed in 1988 by Takemura Masayoshi and Hatoyama Yukio as a cross-factional group to further debate on political reform. By dividing the LDP into proreform and status quo wings, the Utopian Politics Study Group set into motion the formation of New Party Sakigake, a party that would play an essential role in unseating the LDP from government in 1993 and that eventually also precipitated the formation of the Democratic Party of Japan, which would again unseat the LDP in 2009.

Abe at the Center of the Associations

Will history repeat itself with the formation of an informal parliamentary association resulting in major political change? This time the struggle appears to be little more than an inward-focused fight over party funds and party and cabinet posts, rather than over ideology or reform. Furthermore, there is no strong determination on either side to go to the mat for Suga.

Prime Minister Suga’s political fate is tied to him hosting the Tokyo Olympics and accelerating the vaccination rollout with few disruptions. By positively influencing public sentiment, Suga was betting that sustaining a robust majority in a snap general election would enable him to survive a subsequent LDP leadership vote (which must be held by the end of his term ending on September 30), preferably without having to face any challengers.

However, such plans may have been upset by the recent Tokyo Metropolitan Assembly election results on July 4. The LDP initially expected an easy victory due to reduced public enthusiasm for the Tomin First no Kai party, closely aligned to Tokyo Governor Koike Yuriko. With the LDP-Kōmeitō ruling coalition failing to even regain the majority in the Metropolitan Assembly, voices questioning whether the ruling parties could effectively compete in the autumn House of Representatives election under Prime Minister Suga suddenly grew louder.

What happens if Suga’s cabinet approval ratings deteriorate further? If a strong alternative candidate to Suga emerges before the lower house election, required by the Constitution to be held no later than October 22, there is always the possibility that the LDP will abandon Suga and quickly rally around this person to improve the electoral fortunes of the ruling coalition. However, since such no such candidate has appeared yet, there is no irresistible movement within the party focused on removing Suga—to the prime minister’s great benefit.

Returning to the “3A-2F” struggle, what cannot be overlooked is that the parliamentary associations at the center of all this volatility all focus on Abe. Serious musings over whether the former prime minister will make a second comeback currently sit alongside moves within the party to take down Nikai. Although Abe himself has not indicated a desire for a third term, the fact that he is even being considered demonstrates the serious shortage of leadership resources in the LDP and the Japanese political world at large.

What is apparent, however, is that this time around Abe will be heavily involved in selecting the next prime minister. Strangely, despite neither side strongly falling behind a candidate for “king,” the contest over who will be “kingmaker” between Abe and Nikai is becoming increasingly fierce.