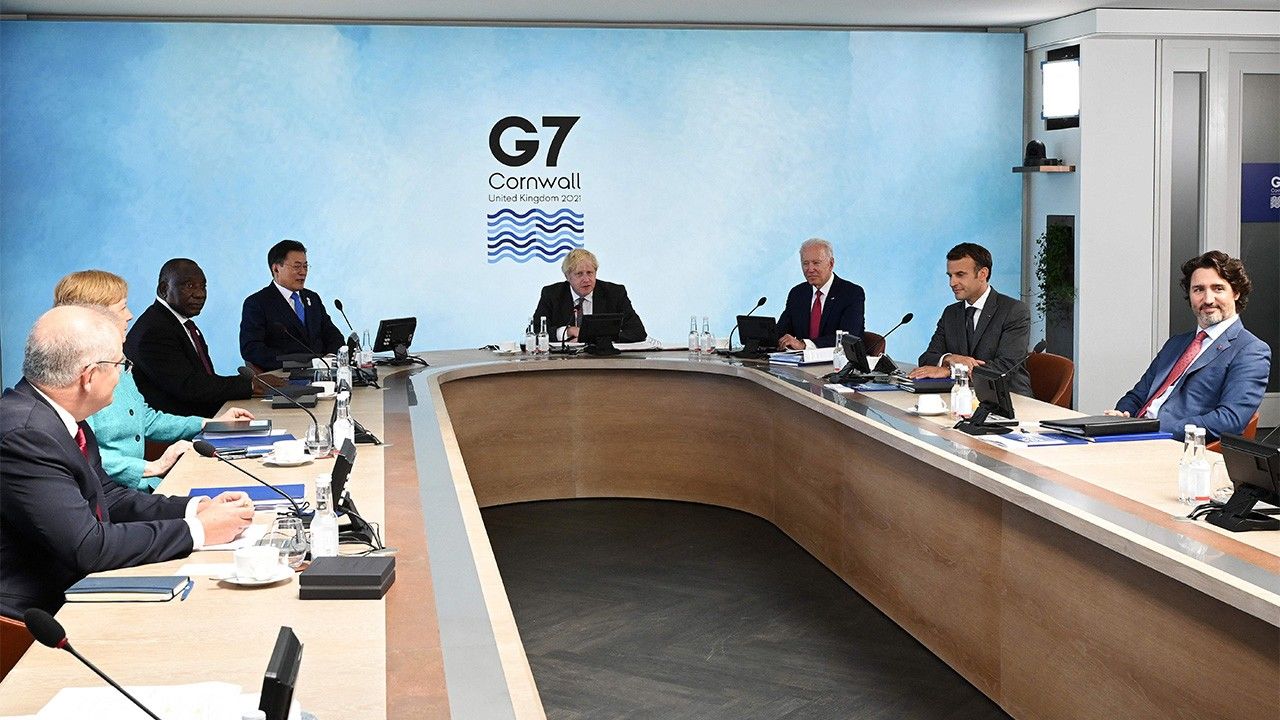 The D10 Initiative and Japan: Options for Expanding the Coalition of Democracies

Politics Aug 16, 2021
Last year, ahead of the 2021 G7 summit in Cornwall, the British government called for a new “D10” coalition of democratic countries to counter the threat posed by Huawei’s 5G technology. The author discusses the initiative’s impetus, problems, and prospects and stresses Japan’s crucial role going forward.

A British proposal for an expanded coalition of democratic partners, dubbed the Democracy 10, grabbed headlines in late May 2020 and quickly soared to the top of the global agenda. The D10 initiative floated by London envisioned a partnership composed of the Group of Seven (Britain, Canada, France, Germany, Italy, Japan, and the United States) plus the Indo-Pacific nations of Australia, India, and South Korea. Moving quickly to promote the concept, Prime Minister Boris Johnson invited the leaders of those three prospective partners (and later South Africa and Brazil as well) to participate as guests in the 2021 G7 summit (held in Cornwall this past June), and there was even talk of launching a D10 or possibly a D11 on that occasion.

The proposal proved a tough sell within the G7. In the following, I review the merits and disadvantages of such a framework, assess the future of the D10 initiative, and consider the way forward for Japan.

In fact, the D10 was not a new idea, nor was it the brainchild of the British government. The concept was first proposed in 2008 by US State Department policy planners Ash Jain and David Gordon as a platform for strategic collaboration between the United States and other leading countries committed to democratic values. Later, Jain joined the US-based think tank Atlantic Council, which in 2014 launched the D10 Strategic Forum. This “track 1.5” dialogue (in which government officials participate in an unofficial capacity) has met annually since then, with Australia, Britain, Canada, France, Germany, Italy, Japan, South Korea, the United States, and the European Union as regular participants. Such democratic states as India, Indonesia, Poland, and Spain have also participated, as observers.

Of course, the G7 itself has functioned as a means of affirming and cementing solidarity among the world’s leading democracies ever since the expulsion of Russia in 2014. Last February, for example, the leaders issued a joint statement condemning the military coup in Myanmar. In March they released a statement expressing grave concern over anti-democratic changes to Hong Kong’s electoral system.

Why, then, have some argued the need for a larger grouping to promote democratic values and objectives? The biggest reason is that every member of the G7 except Japan is a European or North American country. Given the current position of the Indo-Pacific region—home not only to behemoths China and India but also to many fast-growing middle-income countries—at the forefront of international affairs, there are concerns about the G7’s ability to exert global leadership without greater representation from that part of the world in particular. This is why Australia, India, and South Korea have featured prominently in recent discussions.

Discussions at the annual meetings of the Atlantic Council’s D10 Strategic Forum have tended to center on the broad theme of promoting and supporting democracy globally, as opposed to specific strategic concerns. The reported aim of the British government, by contrast, was to promote alternatives to reliance on Chinese telecommunications giant Huawei for fifth-generation (5G) mobile-communications equipment and technologies. One reason for this narrow focus was doubtless a desire to clarify the new group’s priorities and prevent the discussion from ranging too widely. But the agenda undoubtedly reflected Washington’s influence as well.

It was earlier in May 2020, in fact, that the administration of US President Donald Trump imposed new trade restrictions targeting Huawei and its products. The Trump administration had charged that Huawei’s equipment contained “back doors” which allowed the company to covertly access mobile-phone networks and which could be used by the Chinese government for surveillance or espionage. In response to these developments and intense pressure from Washington, members of Britain’s Parliament were calling for a shift in British policy vis-a-vis Huawei.

The issues surrounding 5G technology have serious repercussions for democracy and national security, as well as privacy and human rights, and the gravity of those issues can only increase with the spread of such 5G-dependent technology as the Internet of Things and smart cities. To protect the security and confidentiality of our data, we need to ensure that critical 5G technology, supply chains, and data management are in the hands of trustworthy actors.

However, the launch of an expanded coalition of democracies is problematic for two basic reasons.

First, it is unclear whether such a team would prove more effective than the G7 in pursuing the aforementioned goals. A small group would obviously be desirable from the standpoint of reaching concrete decisions in a timely fashion. But the choice of another three or four participants could be tricky. A report released by the Atlantic Council in June this year stressed the need to select members on the basis of their commitment to democratic values and global influence. But rigorous application of those criteria could eliminate a number of prime candidates. India is certainly an influential country, but in recent years the concentration of power in the hands of the prime minister and ongoing violations of the rights of religious minorities have called into question the government’s commitment to democracy. Similar concerns could disqualify South Africa and Brazil, as could their close links to China and Russia. Conversely, there is a strong case to be made for including the EU, given that it is the European Commission—rather than the individual EU member states—that has formal jurisdiction over transnational issues pertaining to the Internet and digital communication.

In any case, as argued by Steven Feldstein of the Carnegie Endowment for International Peace, any attempt to limit the decision-making process to 10 or 12 like-minded countries would necessarily leave out a number of “swing states,” such as Indonesia and Kenya, on whose policies China’s regional influence may ultimately hinge. Inevitably, such an exclusive club would leave the key battlegrounds of Southeast Asia, Africa, and Latin America underrepresented.

The second major issue is that, particularly given the agenda proposed by the British government, a D10 or D11 could easily take on the appearance of an anti-Chinese bloc, as opposed to a high-minded coalition for the promotion of democracy. In addition to undermining the group’s legitimacy as a champion of universal values, such politicization could accelerate the division of international society into competing blocs, hindering international cooperation on such key global issues as infectious disease and climate change. These concerns have been voiced especially by the EU countries, which tend to view Russia, not China, as the main threat to democracy and regional security.

In all, the response to Britain’s D10 proposal has been mixed. In the 2021 Democracy Perception Index (an international public opinion poll conducted by Latana in collaboration with the Alliance of Democracies), the reaction was largely favorable among the countries that have been named as likely candidates for inclusion: The proportion of respondents rating the proposal as “very good” or “somewhat good” was 67% in India, 63% in Australia, and 57% in South Korea.

There was considerably more dissent among the G7 states, however. In Italy, France, and Germany—the countries that have expressed the most concern about the formation of an anti-Chinese coalition—the share of respondents who gave the proposal a positive rating was 39%, 43%, and 49%, respectively. In Japan, the sole Asian member of the G7, only 47% of respondents were favorably disposed to the initiative, reflecting public resistance to the idea of admitting another Asian country—especially South Korea—into the club of leading democracies.

Confronted with opposition from within the G7, the British government changed course shortly before the June 2021 summit and opted against placing the D10 initiative on the official agenda. London and Washington now seem more inclined to leverage existing avenues of negotiation in pursuit of their objectives.

Leery of contributing to the fragmentation of the global economy, the G7 is likely to continue relying on established multilateral and bilateral frameworks to achieve its objectives. The fact is that the establishment of a new framework expressly limited to democracies is bound to raise hurdles to collaboration with nondemocratic countries, and such cooperation is important, especially where the 5G issue is concerned. The G7 countries are probably wise to avoid the “democracy” label.

That said, the retreat of the D10 initiative leaves unresolved the question of how to strengthen cooperation between the G7 and the rising nations of the Indo-Pacific. In this context, Japan has a pivotal role to play.

Most of the leading Western democracies have either prohibited or strictly limited Huawei’s involvement in their 5G networks. In Asia, however, Japan is currently the only country that has shown a willingness to embrace such restrictions. Now Japan must do its part, working with the United States and Australia, to provide the necessary information to other countries in the region and persuade them to adopt a similar policy. At the same time, it must promote international diversification of supply chains so as to reduce the economic risks of such a stance.

Looking beyond the 5G issue, Japan needs to beef up regional partnerships oriented to the larger goal of promoting democracy. This means proactively pursuing bilateral and multilateral cooperation on multiple fronts with such democratic actors as Australia, India, Indonesia, South Korea, and Taiwan, while building up regional mechanisms to support liberal democratic values.

The ever-rising profile of the Indo-Pacific region places a heavy responsibility on Japan. Conscious and proud of our identity as a liberal democratic nation, we must answer those expectations and play an active part in defending and promoting democracy around the region.

This work was supported by the Abe Fellowship Program, which is funded by the Japan Foundation Center for Global Partnership and carried out in cooperation with the Social Science Research Council.