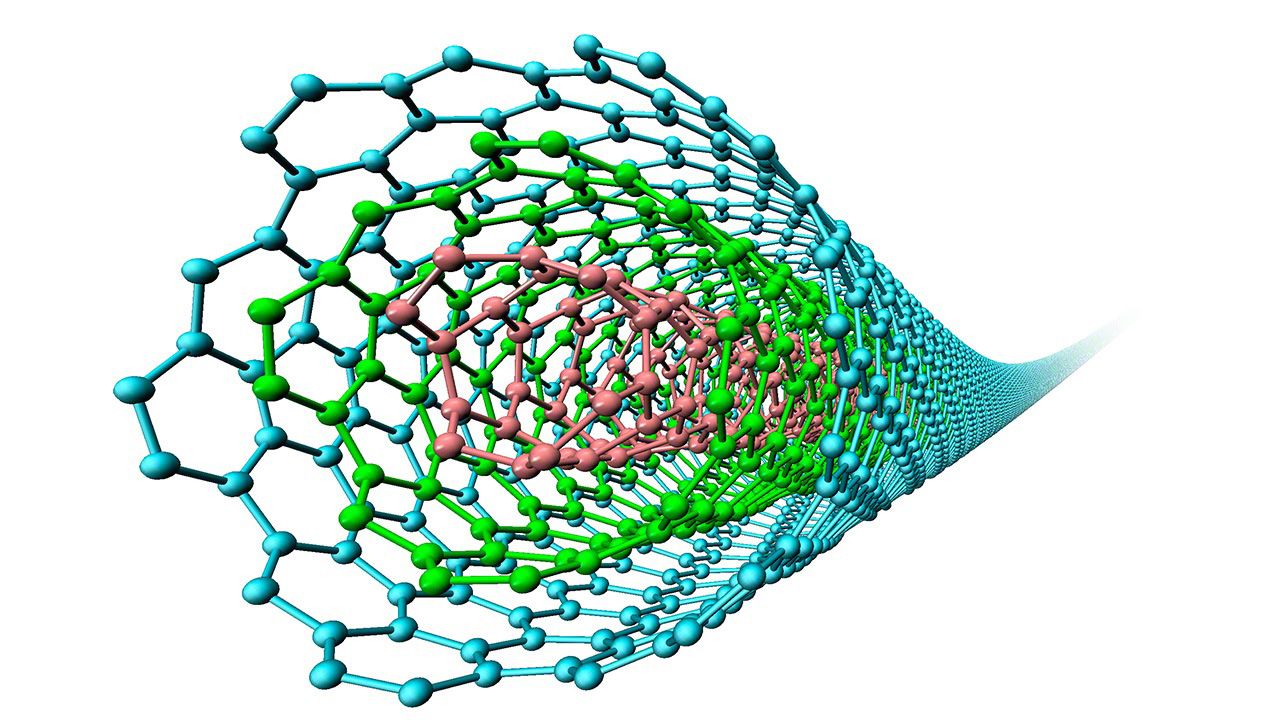 Science Nov 29, 2021
Carbon nanotubes are nanosized ultrafine, hollow cylinders of carbon atoms. They appear in a wide range of applications, including as electrode materials in lithium-ion batteries. Now, Shinshū University is making progress in research using this nanotechnology material in seawater desalination and water treatment.

Desalination Is a Global Human Issue

The United Nations Children’s Fund reports that more than 700 million people worldwide do not have access to safe drinking water, and 300,000 infants die annually due to contaminated water. Ensuring clean, stable water access is also the sixth of the United Nation’s 17 Sustainable Development Goals. There are aspects to the water issue that go beyond health, as well. For example, a paper presented at an international conference on desalination showed that water access is also related to gender equality and equal opportunity in education, since many women and children are forced to spend their time doing the hard work of collecting water, and many children are unable to receive proper education because of their water-carrying duties. Only a few dozen countries worldwide offer reliable, direct access to potable tap water, but maintaining household water supply is also an urgent issue due to aging infrastructure and deteriorating water sources.

At the same time, the international community is focusing more on carbon neutrality. One related effort is the plan to increase vegetation and protect marine life in Saudi Arabia and other Middle Eastern countries, where sustainable desalination technology is essential at present and into the future. Desertification, driven by global warming as well as the rapid increase in water consumption caused by growth in populations and economies, is revealing ever more starkly the pressure on water sources. All of humanity shares the need to develop stable water resources through better seawater desalination technology. 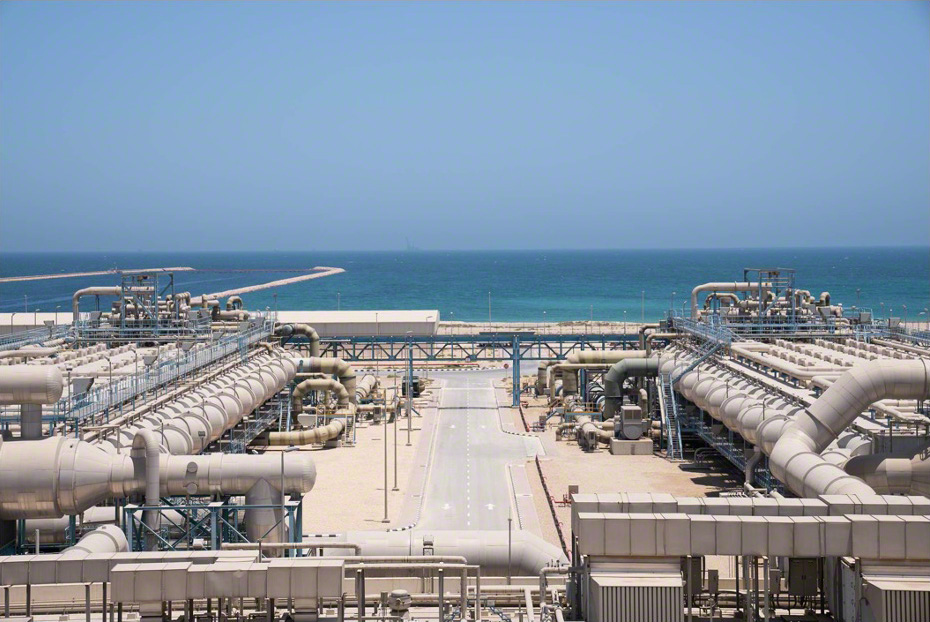 Currently, the main desalination technology centers on the reverse osmosis membrane method. It leverages the basic principles of reverse osmosis using a membrane with countless microscopic pores that allow only water to pass through, removing salt and other substances from seawater to create fresh water. Currently, this method produces roughly 65 million tons of fresh water a day worldwide. This is equivalent to 14 times Tokyo’s metropolitan water supply, a city with a population of about 14 million. The main uses for this desalinated water are municipal water supplies, using about 60% of the output, and industrial use at 30%. Reverse osmosis technology clearly offers a significant contribution to humanity. 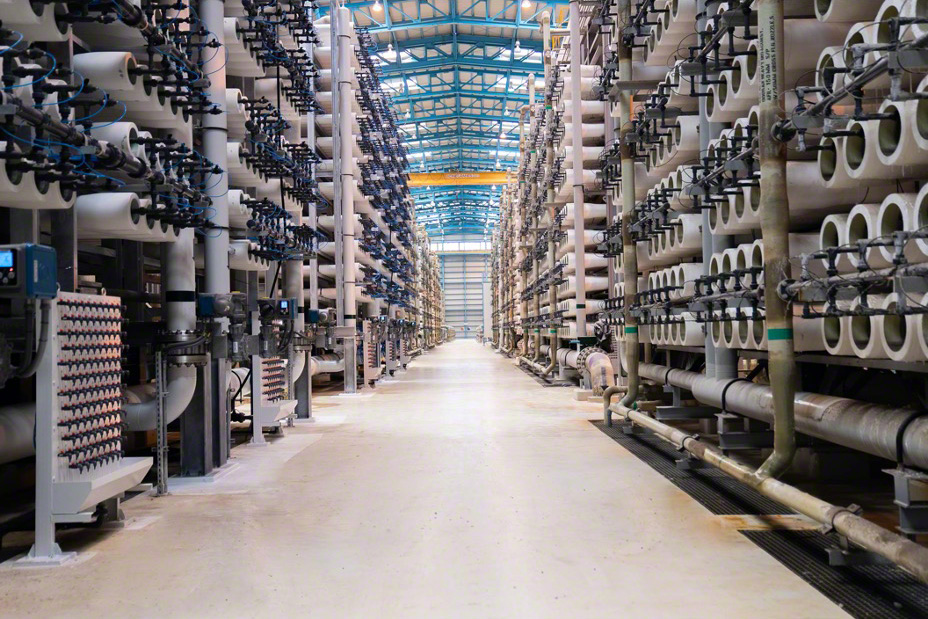 Tubular desalination modules installed in a desalination plant on the west coast of Saudi Arabia. They contain reverse osmosis membranes that remove the salt from seawater. (Courtesy Saline Water Conversion Corporation of the Kingdom of Saudi Arabia)

The reverse osmosis membranes widely used today are made of a polymer called cross-linked aromatic polyamide, a high molecular weight nylon with a thickness of several hundred nanometers. These represent many improvements in reverse osmosis membranes since they first appeared in the 1970s. Today, reverse osmosis offers a safe, stable source of fresh water from seawater and has contributed much to the world, but in an era when sustainable global environmental measures are increasingly urgent, this area demands further technical innovation on the base of the great technological accumulation so far.

The first area of improvement is cost. Currently, removing 99.8% of the salt from seawater to create fresh drinking water requires very high water pressure, along the order of five to seven megapascals. That creates an enormous demand for electric power, and the resulting cost of desalination is about $1 per ton. International associations working on desalination are trying to cut that cost in half with greening and other sustainable concepts.

We also need to further investigate how to avoid deteriorating ocean water quality. The desalination process results in 1.5 liters of highly concentrated brine for every 1 liter of fresh drinking water produced. This brine contains twice as much salt per unit as ocean water, and watchdog groups have pointed out that the impact of this effluent on marine ecosystems, particularly closed ones, is an issue needing attention. One promising solution to the issue is repurposing waste brine as a reusable mineral resource. Researchers are working on ways to reclaim mineral resources like salt, lithium, and magnesium from the brine.

One key to further cost-cutting and environmental measures, though, is increasing membrane resiliency. Strengthening reverse osmosis membranes to fight deterioration first requires reducing the level of contaminants that adhere to the surface of the membranes. Seawater is filled with impurities like plankton, which can clog the membranes during filtration. Natural organic substances, like alginic acid from seaweed or humic acid from decaying plant matter, are particularly difficult to remove. These contaminants clog membrane diffusion pathways at the molecular level, which reduces their water permeability and desalination rates. When that happens, not even increasing water pressure will clear the pathways. The desalination plant has to be shut down and clean water pumped through the equipment to clear it, but that also incurs considerable costs.

Currently, plants chemically pretreat seawater intended for desalination to remove impurities in hopes of reducing clogging. Although the chemicals used are detoxified before being released into the ocean, they still need to be kept to a minimum to preserve marine environments. From this point of view, more resilient reverse osmosis membranes offer considerable hope because increased durability will reduce the need for treatment—allowing us to build on the hard work of those who went before us by making further significant improvements through this research.

Carbon nanotubes are nanosized ultrafine, hollow fibers of carbon atoms in cylindrical form . They can be formed from hydrocarbons like methane at about 1,000℃ through metal-particle catalysis, using metals like iron. They are 1/50,000th the thickness of a human hair, lightweight, and many times stronger than steel. Since they are chemically stable and efficiently transfer heat and electricity, they are used as electrode additives for lithium-ion batteries, helping to strengthen battery performance. They are also widely used as additives for carbon-fiber-reinforced plastics, like in tennis rackets and golf club shafts. Since carbon nanotubes can be produced from biomethane, they are also environmentally friendly nanotech material whose main byproduct is hydrogen.

In 2018 Shinshū University succeeded in developing an innovative reverse osmosis membrane by mixing carbon nanotubes with conventional cross-linked aromatic polyamide. Mixing in the optimal amount of nanomaterials positively charged the membrane and reduced surface irregularities. The result was that the impurities, also called foulants, became less likely to adhere. 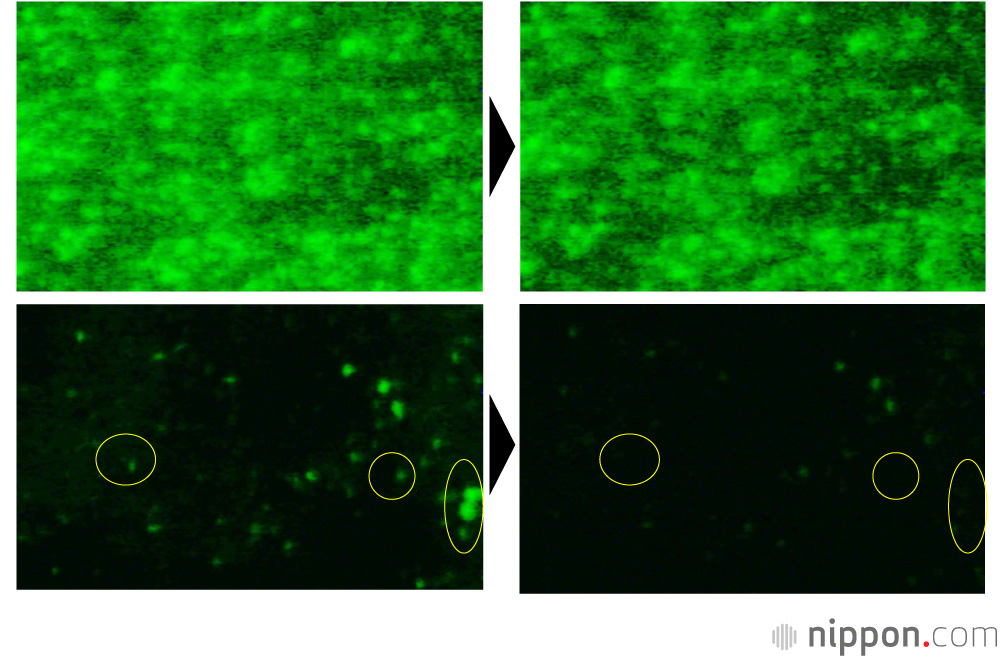 The frames above show a conventional reverse osmosis membrane. Below is the nanocomposite membrane developed at Shinshū University. Left is after 48 hours, right is after 52 hours. The green proteins adhere to the conventional membrane, but the small clumps of proteins adhering to the nanocomposite membrane peel off and are almost gone after 52 hours. (© Shinshū University). 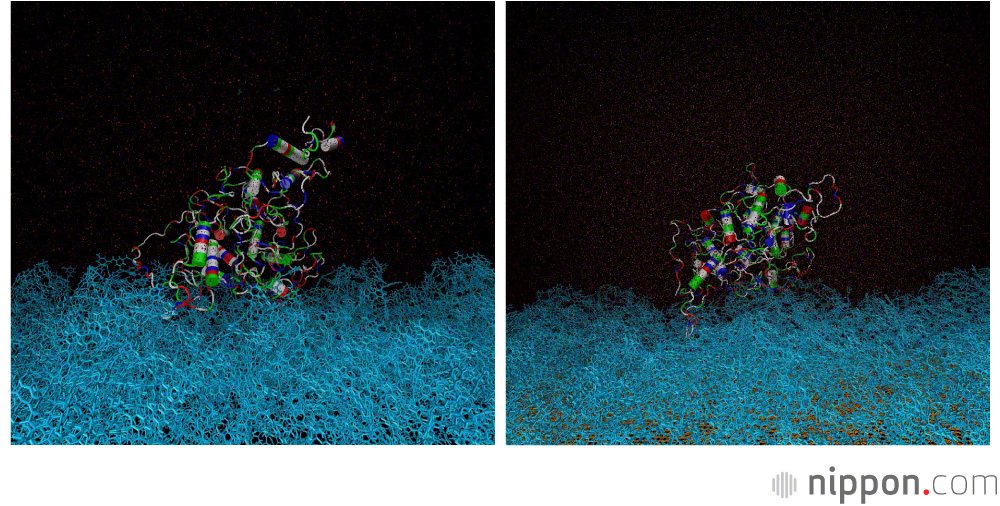 Proteins adhere to the conventional membrane at left (the fibrous material in blue at bottom), while they only adhere weakly to the Shinshū University membrane on the right, and they can be easily removed by water flow. (© Shinshū University)

The practical application of clog-resistant nanocomposite membranes containing carbon nanotubes will enable environmentally friendly “green desalination” technology, saving energy and minimizing the use of chemicals, perfect for this environment-conscious age. 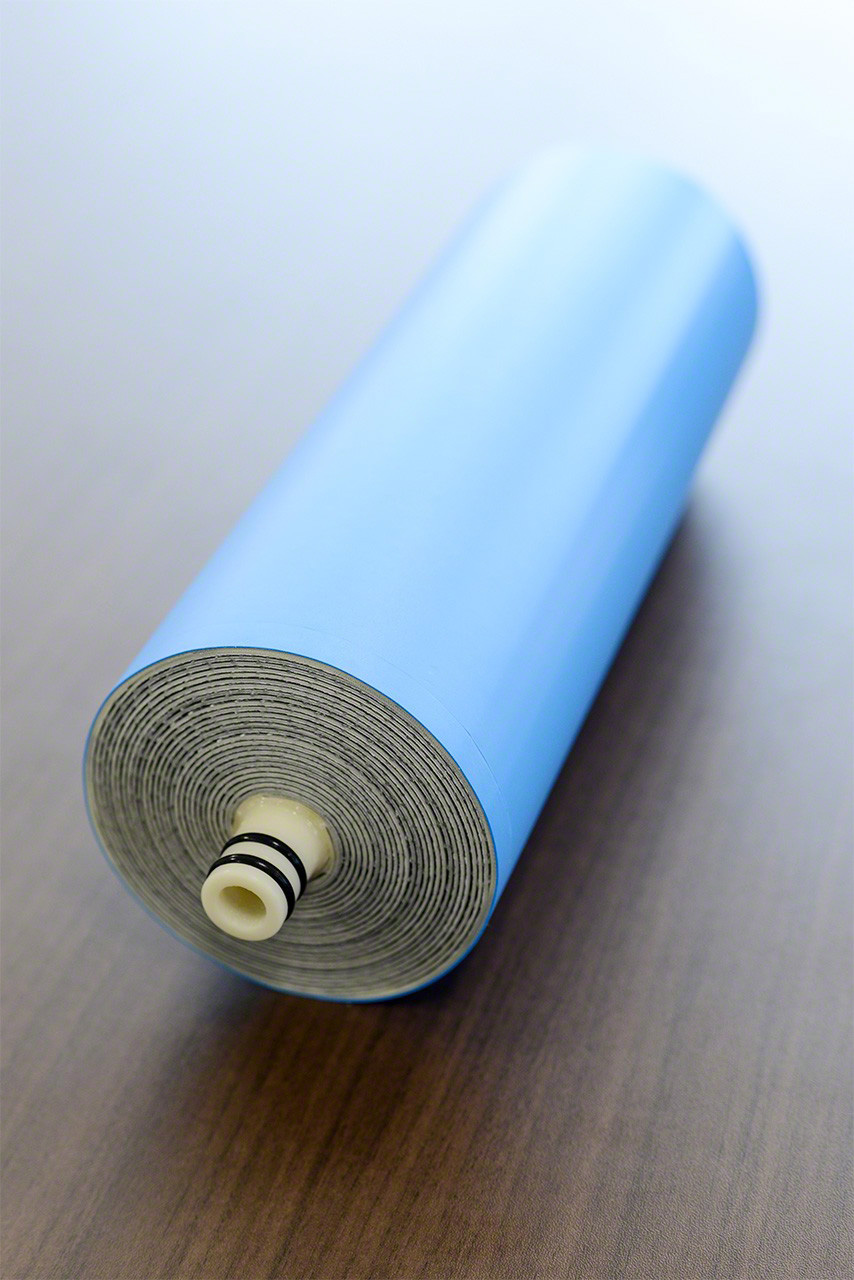 A seawater desalination module using nanocomposite membranes. Running seawater through this module removes the salt content. The black areas on the cross-section show the presence of carbon nanotubes. (© Shinshu University) 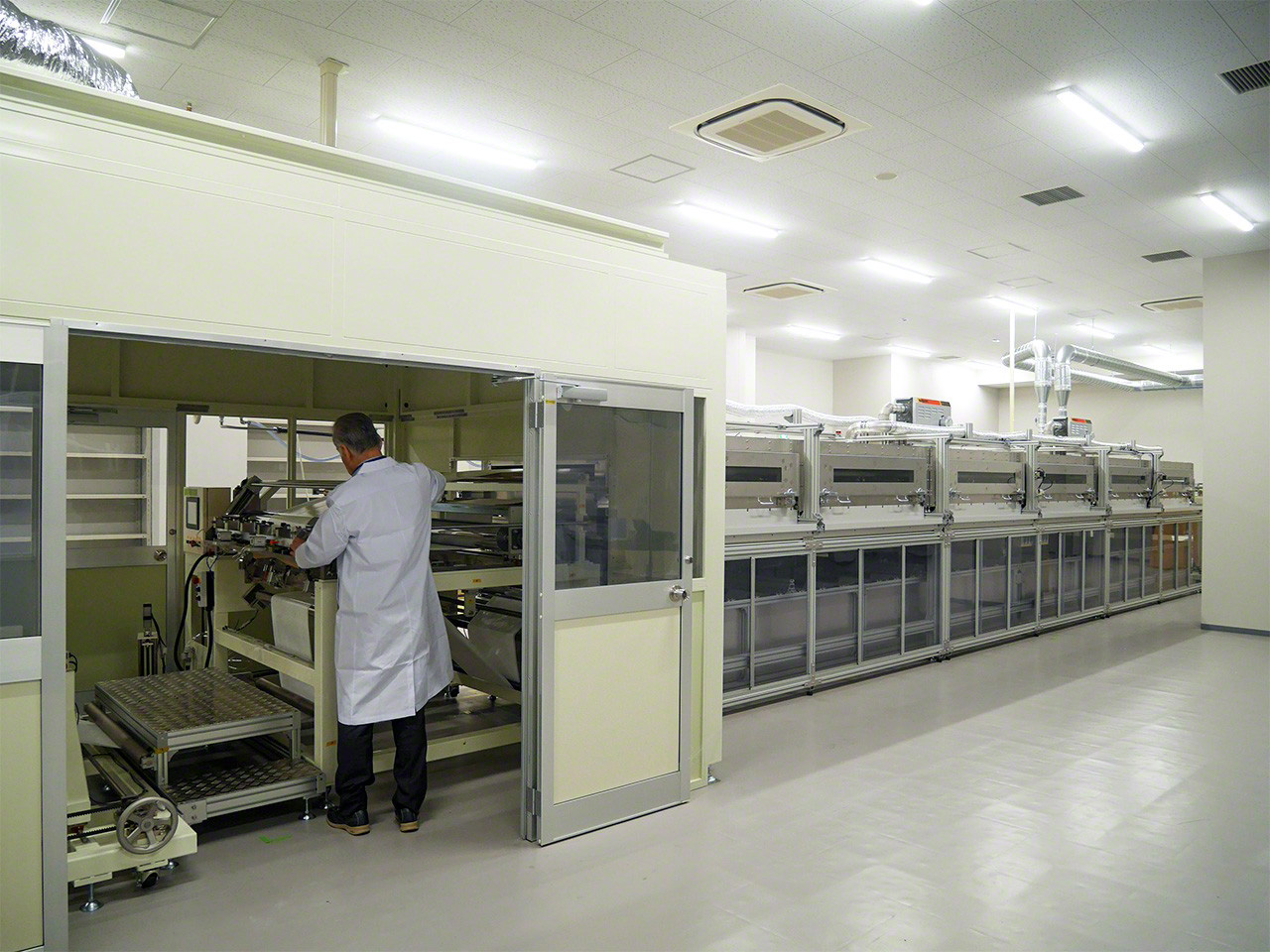 Since 2020, the university has been using nanocomposite membranes for actual seawater desalination at Water Plaza Kitakyūshū, and has verified performance of the membranes against pollutants. These proof-of-concept tests have shown that they can help reduce the need for chemical treatment and extend life compared to conventional membranes. As a result, nanocomposite membranes could allow for longer-term desalination operation, potentially reducing operating costs by 10%–15%. They could also simplify raw seawater pretreatment facilities, another source of high operating costs. 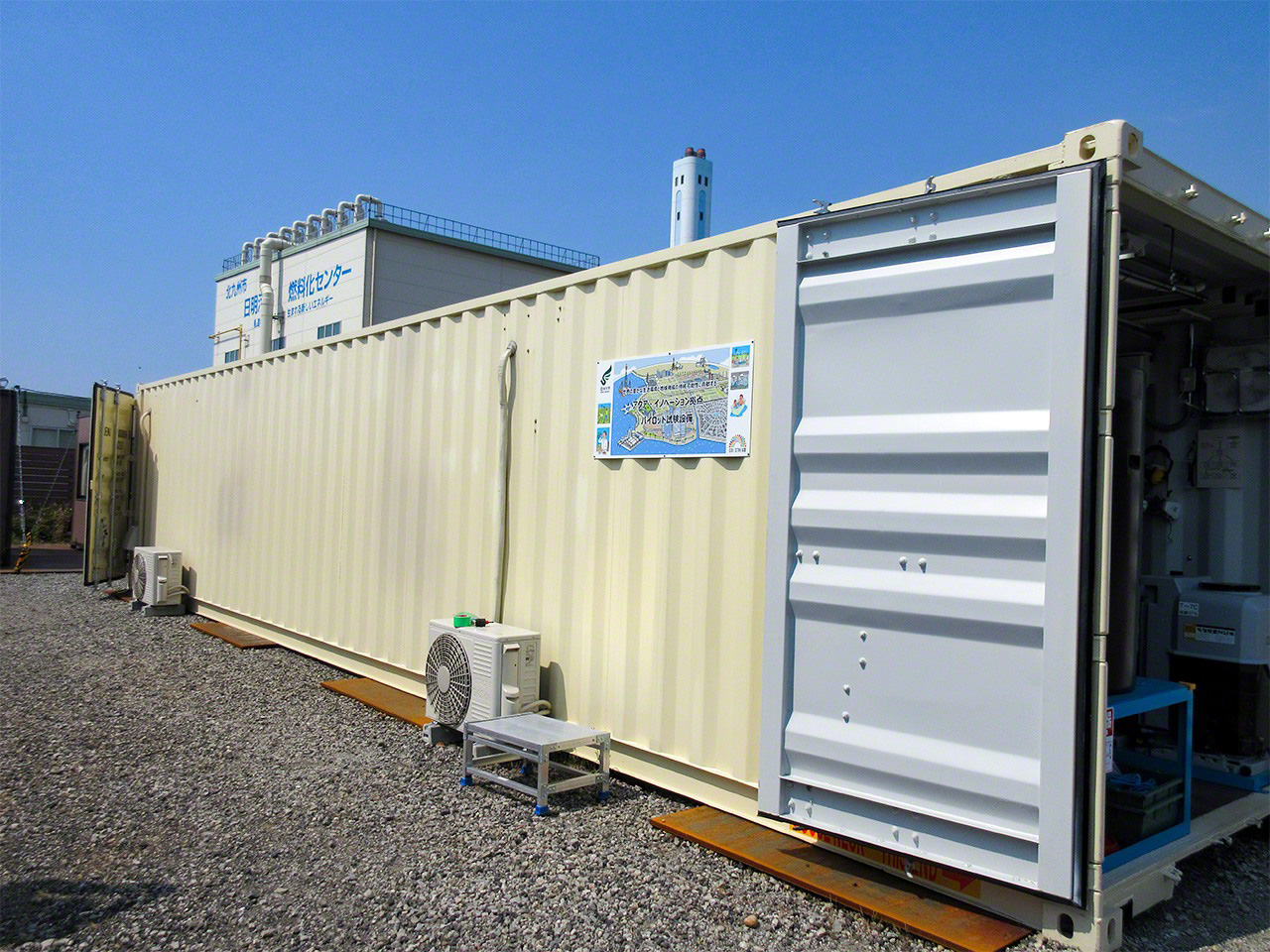 The center is currently working with desalination-related companies and research institutes all over the world to implement nanocomposite membranes in desalination facilities. Shinshū University’s membranes can also be applied to sewage treatment and industrial wastewater reuse, something that has yet to be fully achieved, and hold enormous promise for water recycling systems that can benefit both the environment and society. I believe that the nanocomposite membranes developed by Shinshū University, which is at the forefront of carbon nanotube technology, can offer a huge contribution to addressing the water problems the world faces this century.