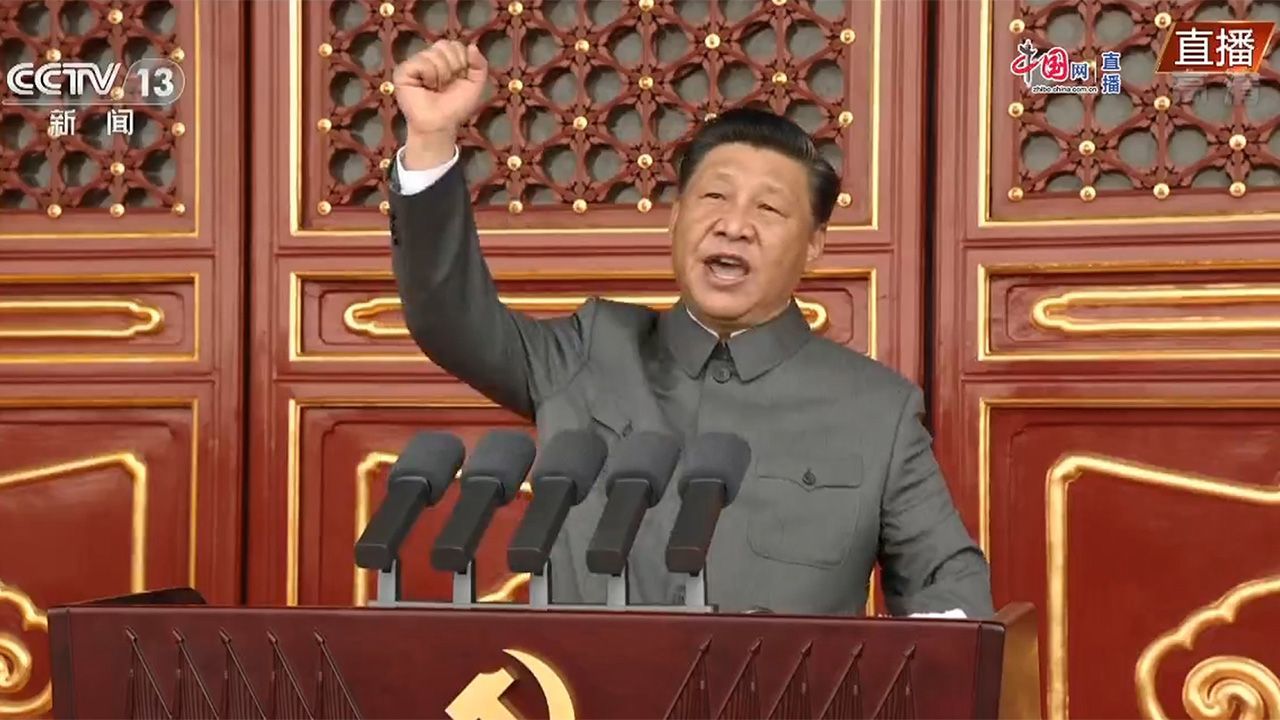 National Unity in Pursuit of the Chinese Dream: A Primer in Xi Jinping Thought

Politics Oct 12, 2021
China watcher Kawashima Shin probes beneath the celebratory rhetoric of President Xi Jinping’s speech on the centenary of the Communist Party of China to shed light on the conceptual underpinnings of the regime’s authoritarian policies.

When Chinese President Xi Jinping delivered a major speech on July 1 this year, the centenary of the Communist Party of China, news organizations around the world were on high alert for any explicit or implicit message relevant to the leadership reshuffle expected in October 2022, at the twentieth National Congress of the CPC. While it is certain that Xi Jinping means to retain control of the party and the state for the foreseeable future, it is still unclear whether he will assume the mantle of chairman, a position abolished in 1982. From this narrow perspective, the July 1 speech offered nothing newsworthy. But read carefully, it tells us much about the basic thinking that has driven—and will doubtless continue to drive—the policies of the Xi Jinping regime.

The March of Progress

A large portion of Xi Jinping’s speech on the CPC’s centenary was historical narrative. Structured around the “four histories” framework (history of the party, of the new China, of reform and opening, and of the development of socialism) embraced by the CPC under Xi, that narrative centered on the achievements of the party and functioned to affirm the legitimacy of its ongoing leadership.

Another lesson Xi drew from the “four histories” was the need for unity between the party, the state, and “Chinese people of all ethnic groups” to build a modern socialist country and achieve the Chinese dream of national rejuvenation.

The centenary of the CPC represented the first milestone in the party’s timetable for progress toward the Chinese dream. Xi established that timetable at the nineteenth party congress in the autumn of 2017 with a commitment to “build a moderately prosperous society in all respects” by 2020, achieve “socialist modernization” by 2035, and turn China into a “great modern socialist country” by 2050. The first and last objectives, known as “centenary goals,” were to be achieved by the 100th anniversary of the CPC (2021) and the centenary of the People’s Republic of China (2049), respectively.

The Meaning of “Moderate Prosperity”

“Moderate prosperity” on its own might be measured simply in terms of per capita gross domestic product. Deng Xiaoping set a 2020 goal of $4,000 per capita GPA, a target China met long ago. At the 2002 National Congress, General Secretary Jiang Zemin declared that China as a whole had indeed achieved moderate prosperity. At the same time, he called for efforts to make that wealth more comprehensive or all-inclusive (quanmian), stating that China must “further develop the economy, improve democracy, advance science and education, enrich culture, foster social harmony, and upgrade the texture of life for the people.”

When Xi Jinping came to power, he redoubled the emphasis on “building a moderately prosperous society in all respects,” and he made anti-poverty policies a prominent part of that effort. The “fight to eradicate poverty” became official policy following the adoption of identical resolutions by the Central Committee of the CPC and the State Council in the autumn of 2015. The government subsequently compiled a list of impoverished counties as targets for anti-poverty measures, and in the autumn of 2020, it announced that all 832 counties had been removed from that list.

Xi Jinping’s July 1 speech highlighted his regime’s historic achievement in comprehensively eradicating absolute poverty to meet the centenary goal of “moderate prosperity in all respects,” thereby laying the groundwork for the further goals envisioned for 2035 and 2050. Implicit in this theme was the message that the policies and goals of Xi’s regime are constant and unchanging, even in the face of such challenges as the COVID-19 pandemic and escalating tensions with the United States.

Xi’s lecture on the illustrious achievements of Communist China did not neglect the period since the eighteenth National Congress, which is to say, the Xi Jinping era. This portion of the speech was essentially a recitation of the major policies the government has pursued under Xi’s leadership, with a spotlight on the eradication of poverty and attainment of the centenary goal of “moderate prosperity in all respects.” But from the rest of his speech, and from other statements and actions, we are given to understand that the preconditions for economic development are strong, unified leadership and constant vigilance against internal and external threats to national security.

Xi has vigorously pursued the consolidation of unitary governance under the CPC. One way he has done this is by extending and strengthening the central government’s jurisdiction over “special” areas accustomed to a greater degree of autonomy than the regular provinces and municipalities—not just the outlying “autonomous regions” associated with ethnic minorities but also Hong Kong and Macao. In addition to this spatial unification, Xi’s regime has taken steps to ensure that party and state control filters down through every level of society in those regions.

But how does “eradication of absolute poverty” figure into any of this? The truth is that, in Xi Jinping’s China, that presumably universal goal has taken on special meaning as a justification for policies that other countries have condemned as human rights violations. Indeed, the Chinese government has publicly cited the fight against poverty to rationalize the “mobilization” of Uighurs to work in the cotton fields of Xinjiang and the “recruitment” of migrant laborers to work in factories.

In addition, even while highlighting the attainment of all-round prosperity, Xi makes it clear in his speech that economic development cannot proceed at the expense of security. As he states in his speech, “We must adopt a holistic approach to national security that balances development and security imperatives.” Security, which is necessary to the defense of the nation’s sovereignty, is also a sine qua non for development and the eradication of poverty. Moreover, Xi has made it clear that security must be proactive, anticipating risks even before they appear. Taken together, these precepts allow the government to justify its actions in the Uighur Autonomous Region as necessary to counter terrorism and stamp out separatism.

Xi Jinping has long taken a special interest in history, albeit with a distinctly lopsided focus on the Communist Party of China. Even before assuming leadership of the CPC, he actively encouraged study of the party’s history. Since then, he has promoted his concept of the “four histories”—the history of the party, of the new China, of reform and opening, and of the development of socialism—which has, in effect, cemented the party’s central role in the story of modern China.

Under Xi’s predecessor, Hu Jintao, Chinese society became more pluralistic, and the party responded to that increasing pluralism with a certain degree of flexibility. Even the study and interpretation of history became more pluralistic, as evidenced by the use of such sources as the Chiang diaries. However, some believed that this trend was weakening the leadership of the secretary general and the party as a whole. When Xi Jinping came to power, he set about strengthening the party’s political leadership. At the same time, he sought to unify Chinese historiography by placing the history of the CPC at its core. This campaign culminated in the adoption of the “four histories” narrative framework, a structure to which Xi adheres in his July 1 speech.

Xi’s historical narrative begins with the plight of China in the wake of the Opium War, as it was “reduced to a semi-colonial, semi-feudal society.” After the failure of the 1911 Revolution, he says, “China was in urgent need of new ideas to lead the movement to save the nation and a new organization to rally revolutionary forces.” After the Russian Revolution of 1917, Marxist-Leninist thought made its way to China, and the Communist Party of China was born. This, says Xi, was “an epoch-making event, which profoundly changed the course of Chinese history in modern times, transformed the future of the Chinese people and nation, and altered the landscape of world development.”

Xi’s account of “reform and opening” is of particular interest. The party “resolutely advanced reform and opening up,” he says, which “enabled China to transform itself from a highly centralized planned economy to a socialist market economy brimming with vitality,” eventually emerging as the world’s second largest economy. Reform and opening also allowed the nation to reach an “overall level of moderate prosperity,” before pushing ahead to achieve the goal of “moderate prosperity in all respects.”

The Problem of Legitimacy

This historical account based on the “four histories” framework leads Xi to the inescapable conclusion that “the achievements of the past hundred years are all the result of a unified effort by the members of the Chinese Communist Party, the Chinese people, and the Chinese nation.” Without the Communist Party of China, he asserts, “there would be no new China and no national rejuvenation.” In this way, history supports the legitimacy of the CPC’s permanent monopoly on power.

Reading Xi Jinping’s speech gives us a certain amount of insight into the most immediate challenges facing the CPC today. Xi addresses it in part by insisting that the party and the people are one: “The party has always represented the fundamental interests of all Chinese people; it stands with them through thick and thin and shares a common fate with them. The party has no special interests of its own—it has never represented any individual interest group, power group, or privileged stratum.”

Xi asserts, in short, that the CPC is truly a party of the people, representing the interests of the entire nation; there is no daylight between the party and the people. This is why “the leadership of the party is the defining feature of socialism with Chinese characteristics and constitutes the greatest strength of this system.” That leadership “is the foundation and lifeblood of the party and the country,” he says, “and the crux upon which the interests and well-being of all Chinese people depend.”

But such perfect agreement assumes that the party is either constantly striving to ascertain the interests of the people or relentlessly shaping public opinion to ensure that the people’s interests, as well as their dreams for the future, correspond exactly to party policy. Having eliminated term limits, Xi seems to be setting extraordinarily high expectations for his own continued leadership through this emphasis on complete unity of purpose. While one can sympathize with his ambition to achieve what no Chinese leader did before him, one cannot but wonder if, by setting the bar so high, he is not increasing his chances of failure.

(Originally written in Japanese. Banner photo: Image of President Xi Jinping’s speech at a celebration marking the centenary of the Communist Party of China on July 1, 2021, taken from a China.org video. © Jiji.)