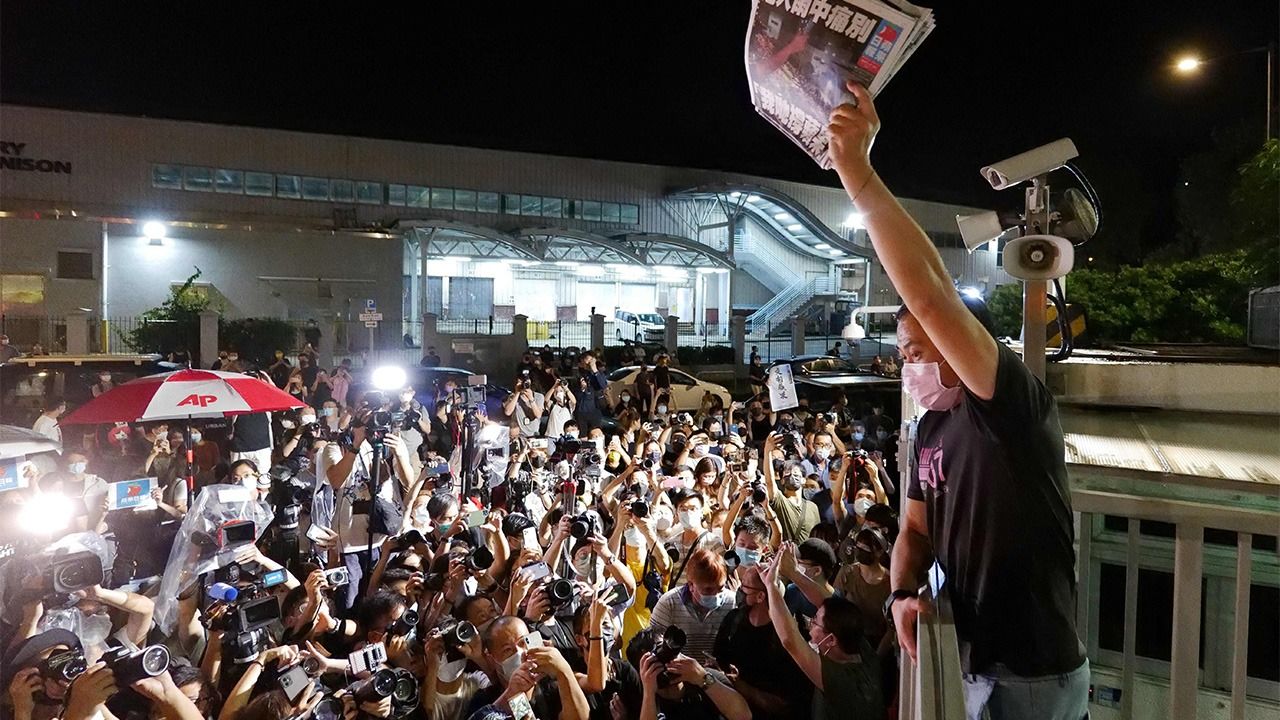 Politics Sep 22, 2021
A year has passed since China introduced the Hong Kong National Security Law. In June 2021, the tabloid Apple Daily was forced to cease publication, and prodemocracy forces are in danger of complete eradication. But the government continues to suppress other organizations with deep roots in civil society.

Aiming to Crush the Prodemocracy Movement

China passed its Hong Kong National Security Law on June 30, 2020. The introduction of the law, with a logic that is completely different from conventional Hong Kong legislation, has plunged the city into uncharted territory. The year since it took effect has seen extraordinary consequences. Protests and public gatherings have vanished—and on the surface, it would seem that peace has returned. But major changes are taking place that will fundamentally transform society.

Among the many NSL-related incidents of the past year, the most shocking for Hong Kong society were the mass arrests of prodemocracy politicians on January 6, and of management and editorial heads of the prodemocracy tabloid Apple Daily on June 17. The first was sparked by the prodemocracy camp’s moves to select candidates for upcoming elections. They were accused of aiming to “subvert the state” by securing a majority in the Legislative Council to veto the budget and paralyze the government. In the second incident, the police accused Apple Daily of colluding with external forces by publishing dozens of articles calling for international sanctions on Hong Kong. The company’s assets were frozen, thwarting operations and driving it to cease publication on June 24.

The government’s political will was behind the police decision to make arrests. On February 22, Xia Baolong, director of the Hong Kong and Macau Affairs Office of the State Council, named three persons considered as particularly nefarious anti-China elements deserving punishment: Apple Daily founder Lai Chee-ying (Jimmy Lai), Benny Tai Yiu-ting, a legal scholar who called for democratization through the Occupy movement, and Joshua Wong Chi-fung, the young leader of the Umbrella Movement. All three were charged under the NSL and await trial.

The charges appear coercive, but these desperate moves to strike at the core of the prodemocracy movement show that the current administration intends to eliminate all opposition. The democratization movement and Apple Daily had almost 30 years of history, emerging after the 1989 Tiananmen Square Incident. Their existence was tolerated for over 20 years following the handover from Britain to China of Hong Kong in 1997. The impetus for establishing the NSL was undoubtedly the large-scale protests in 2019.

These demonstrations were marked by the absence of clear leaders; they were instead directed by groups of anonymous youth and other citizens. The young people relied on online information sources more than newspapers. Members of the prodemocracy movement also showed disdain for major political parties. The key politicians on the democratic side and the Apple Daily were not central to the protests. Moderate democrats were actually critical of demands for an independent Hong Kong, which is anathema in Beijing’s eyes. Still, the central government chose to strike a destructive blow to both the democrats and Apple Daily. The government’s actions suggest that it does not differentiate between moderates and hardliners.

The intention to eliminate the democrats was also clear in recent changes to the electoral system. In March, Beijing significantly reduced the size of the electorate for regular elections for Hong Kong’s Legislative Council and the head of government, the chief executive, creating a system where democrats cannot win. In addition, the national security unit of the Hong Kong police will screen candidates, who are nominated by the pro-Beijing Election Committee. These requirements make it much harder for prodemocracy candidates to enter politics.

Effectively, no one can run in Hong Kong’s major elections without Beijing’s stamp of approval. In the future, China may allow individuals from offshoots of prodemocracy groups and other political parties to run as “new democrats,” but the former democrats, who enjoyed majority support among citizens since the Tiananmen Square Incident, have been virtually swept away.

Suppression of the Whole of Society

Previously, the government claimed the NSL would only affect a small proportion of the population. In one year to June 30, only 117 people were arrested for violating the NSL. Compared with the over 10,000 people who have been arrested for attending protests, in numerical terms, this is still low.

But the arrest of all prodemocracy candidates who hoped to run for the Legislative Council and the demise of one of Hong Kong’s most popular newspapers proves that it impacts more than just a “small proportion.” Over 600,000 people voted in the democratic camp primaries, and the million copies of the final Apple Daily issue sold out. The pro-democracy group always enjoyed majority support. The recent suppression is a showdown between Beijing and the majority of Hong Kong citizens.

Since before the 1997 reversion of Hong Kong to Chinese administration, Beijing has pursued a policy to attract the support of democrats there. It was partly an effort to stabilize politics, reflecting the will of the people of Hong Kong, but was also effective for demonstrating to Taiwan and the world the tolerance of its “one country, two systems” policy. But in the 2019 protests, Beijing faced strong antigovernment sentiment across Hong Kong. When Beijing’s efforts to split the prodemocracy camp and to incorporate moderates failed, it abandoned these policies.

It is doubtful that the crackdown will end here—the threat now extends to all remaining prodemocracy groups. The crackdown took place on the Hong Kong Alliance in Support of Patriotic Democratic Movements of China, organizer of annual vigils on June 4 for the Tiananmen Square Incident, and the Civil Human Rights Front, which organized an annual protest on July 1, the day of the handover of Hong Kong to China. Both groups subsequently disbanded. Both events were well-known in Hong Kong, but such peaceful demonstrations with tens or even hundreds of thousands of attendees may now be a thing of the past.

The crackdown is not limited to political groups. At the end of July, China’s People’s Daily published an article condemning the Hong Kong Professional Teachers’ Union, the largest union for teachers, which boasted over 90,000 members. The Hong Kong government cut ties with the union and, fearing further reprisals, the PTU announced on August 10 that it would disband, ending its 48-year history.

The People’s Daily claimed that the union, which had conducted prodemocracy activities, was essentially a political organization. Last year, it was reported that a central government official in Beijing described Hong Kong’s judiciary, education, and social welfare sectors as “three mountains,” hindrances needing resolution. It is no surprise that civil groups in Hong Kong now face censure, considering the Chinese Communist Party’s increasingly hostile approach to civil society on the mainland.

But, unlike mainland China, where the state controls all aspects of society, in Hong Kong, intermediary civil organizations have historically provided crucial services for the community. Under British rule, Hong Kong enjoyed low taxation and a “small government” liberal economy, benefiting both domestic and foreign business, while education and social welfare were left in private hands.

Many organizations, deep-rooted in Hong Kong society, had democratic leanings, but met social needs in place of the government, and acted as a bridge between government and the people. Although democratization has never been fully realized, these organizations played a crucial role as a conduit of public will.

If clampdowns on groups like the PTU continue, it will inevitably lead to the repression of civil society as a whole, with political intervention in all areas to increase government control. Hong Kong’s autonomous civil society has been a powerful force since colonial times. If this should be brought under central control, as in mainland China, this will not only affect a small number of activists—it will impact the lives of all Hong Kong residents.

Can the Brakes Be Applied?

Significant changes have taken place politically and socially in the year since the introduction of the NSL, and we have entered unknown territory. But from the government’s perspective, the NSL has already provided significant political benefits—silencing dissent both in the Legislative Council and from the main anti-establishment newspaper.

The government boasts the return of political stability, but also claims that it has yet to completely eliminate threats to national security. There appears no way to halt the advance of the current policies, and it is hard to imagine the government reversing course in the near future.

But can it continue implementing political measures in this manner? I believe that the government faces many risks in the long term as it continues to cause US-China friction. US sanctions are as of now having limited impact, but worsening international relations and increased political interference present a clear risk to businesses, particularly foreign companies. Although there are no concrete emigration statistics, sources suggest that around 100,000 people have left in the past year. Capital and talent will not dry up immediately, but the current situation will have a lasting negative impact on Hong Kong’s competitiveness.

After the purge of civil organizations, draining them of considerable high-level expertise, it is doubtful whether the administration can continue to deliver quality governance. If civil groups lose their dynamism, the government’s effectiveness will be diminished, and it will face burgeoning costs. Silencing the population will make it harder to read the popular will, creating another risk for government. The ultimate solution may be the introduction of China-style social control, but it is hard to imagine that the dominance gained in mainland China through revolution and socialism can be mimicked in Hong Kong, with its totally different history.

Although China is increasing its influence around the world, it has repeatedly stated that it does not intend to export the Chinese political system to other countries. But in Hong Kong, promoting national security as priority inevitably involves transformation of society, with authoritarianism as the ultimate goal. Whether or not this invites risks for China, in Hong Kong and beyond, will be a determining factor in the future direction of the government.

(Originally published in Japanese. Banner photo: A journalist from Hong Kong’s Apple Daily waves copies of the final issue in front of supporters on June 24, 2021. © APF/Jiji.)