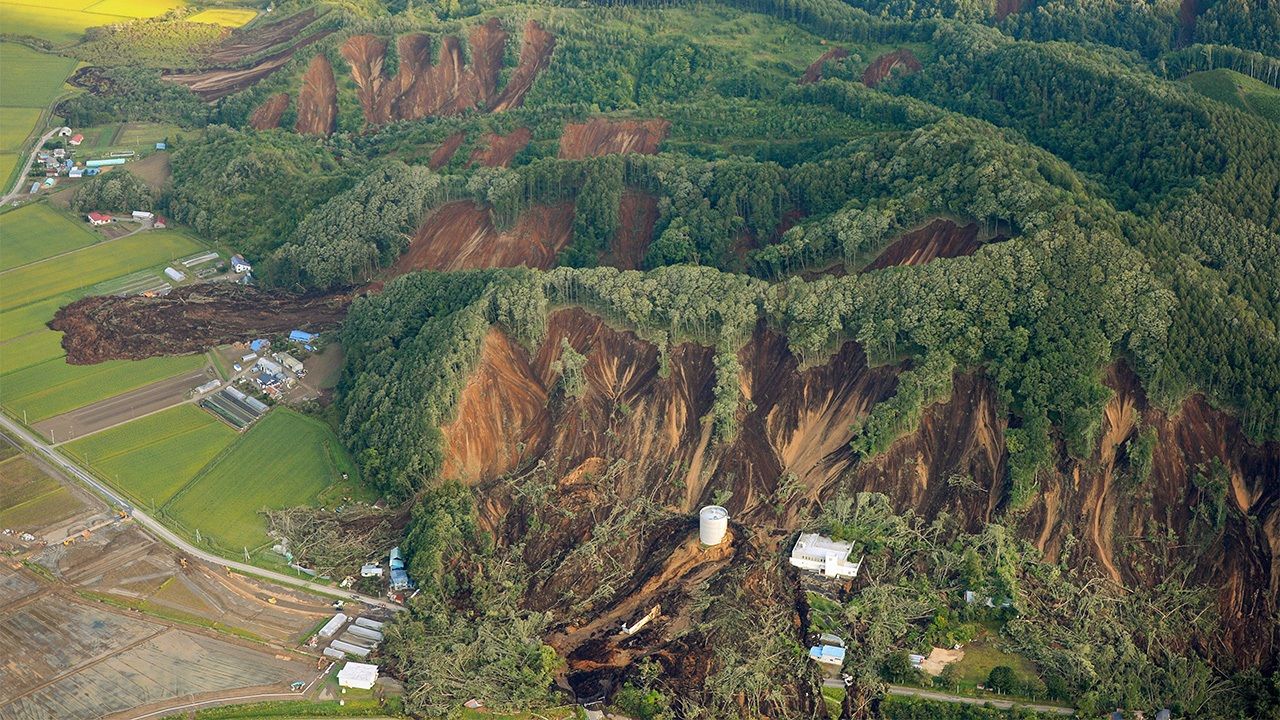 Science Environment Disaster Oct 18, 2021
Since the 2011 Great East Japan Earthquake, Japan has had four earthquakes measuring the top level of 7 on Japan’s seismic intensity scale. Each caused considerable damage, reinforcing the importance of quake forecasting and disaster preparedness. A top seismologist explains the nature of earthquakes in the Japanese archipelago and the potential for forecasting.

Earthquakes are a major threat to the safety of humans and society. Much hope is placed on earthquake prediction—knowing the time, location, and scale of an earthquake in advance—to aid preparedness. But advancements in research have only made it clearer just how difficult this sort of accurate prediction is. Meanwhile, understanding of earthquakes has increased and forecast accuracy is improving. Below I examine seismic research developments accompanying the expansion of Japan’s earthquake observation network and the potential for forecasting.

Earthquakes are movements of underground geologic faults. Vibrations caused by slippage of the two sides of a fault plane are transmitted to the surface, shaking our living environment with seismic motion. When fault movements occur below the seafloor, the displacement can trigger tsunami. Fault planes that cause earthquakes usually adhere through friction, but if additional energy from the surrounding plates exceeds the frictional force, it causes a disruption along the fault plane. This energy originates in movement of rocky plates covering the Earth’s surface. The Pacific Plate and the Philippine Sea Plate are sinking directly below the Japanese archipelago, and the movements of these plates are the main cause of earthquakes across the archipelago (see figure 1). 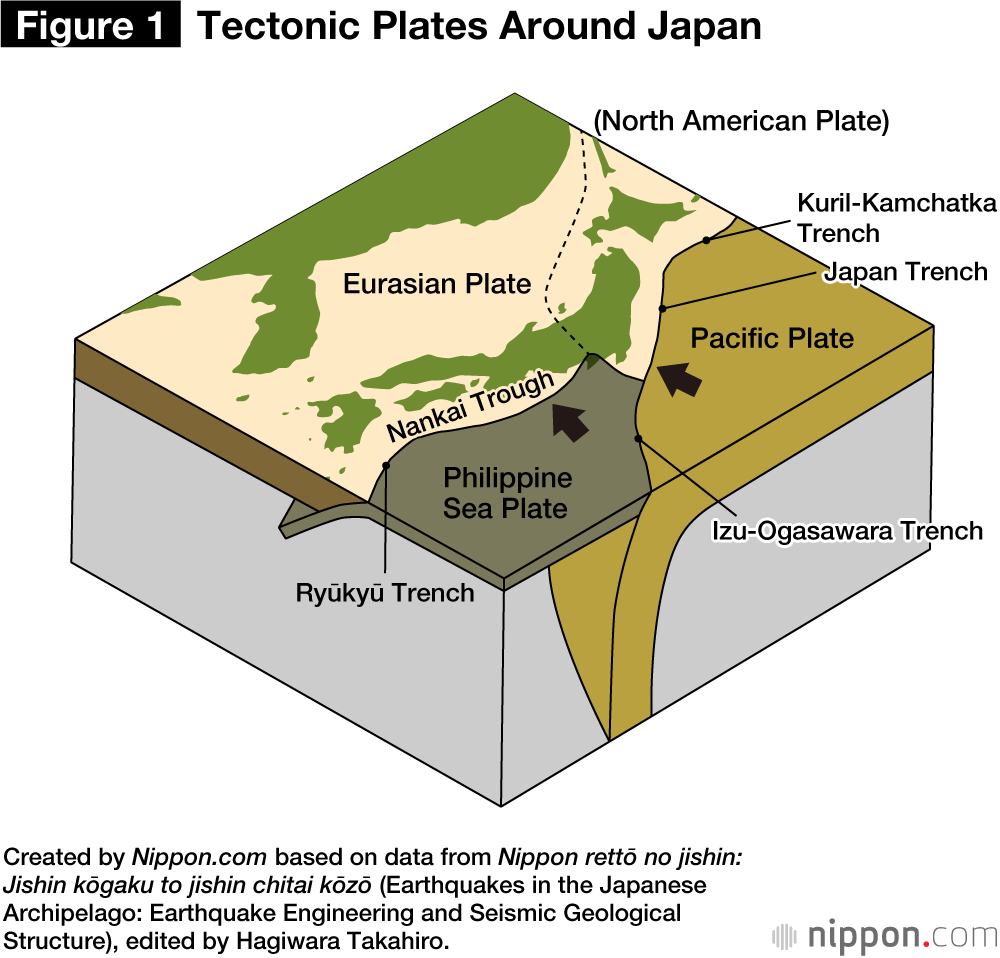 Why Does Japan Have So Many Earthquakes?

The Japanese archipelago, originally part of the Eurasian continent, was formed when it broke off from the continent around 20 million years ago, giving birth to the Sea of Japan. Numerous faults were created in the process, and are the origin of most of today’s inland quakes. Earthquakes occur repeatedly in certain locations, but the interval between them is decades to centuries in the case of plate-boundary quakes and thousands of years or more for inland quakes. But Japan suffers frequent earthquakes because there are so many sources where they can be triggered.

Seismic observation has a longer history in Japan than almost anywhere else. The Seismological Society of Japan was founded shortly after the Yokohama Earthquake of 1880 by the British scientist John Milne, an advisor to the Meiji government. This led to the development of the seismograph. Later, in the 1960s, Japan significantly expanded its observation network under its national earthquake prediction program. The proposition of the Tōkai Earthquake theory in the 1970s led to the development of an earthquake prediction system based on the detection of preslips, which may occur prior to the main rupture.

The 1995 Kobe earthquake spurred major revision of the existing system, with the realization that it was crucial to understand contemporary seismic activity and movement of the Earth’s crust. Japan’s fundamental observation network comprised two nationwide systems: Hi-net, the High Sensitivity Seismograph Network Japan, operated by the National Research Institute for Earth Science and Disaster Resilience, with around 800 stations, along with several other seismic networks (figure 2); and the Global Navigation Satellite System’s GNSS Earth Observation Network System, or GEONET, under the Geospatial Information Authority of Japan, with roughly 1,300 stations. 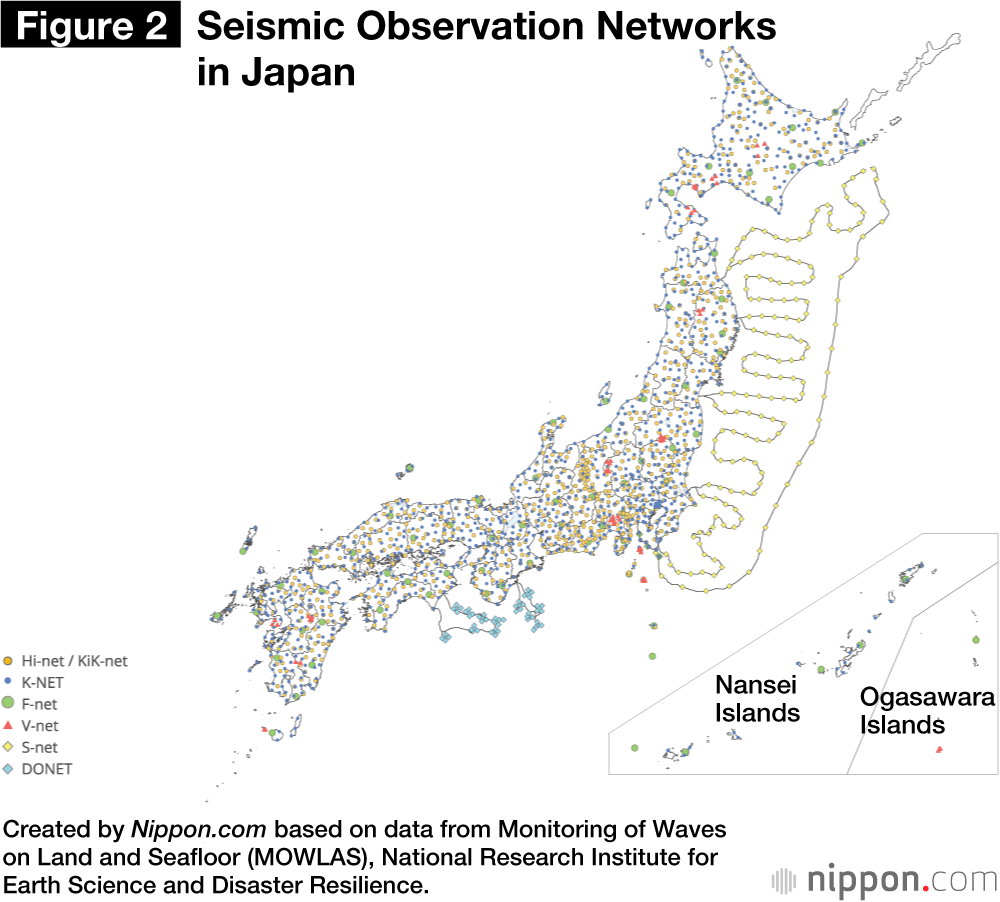 These have markedly improved our capability to observe micro-earthquakes, lowering the minimum threshold of detectability to 0.5 to 1.0 in magnitude. This has increased the number of quakes detected nearly tenfold. It has also revealed linear sequences of shallow earthquakes, indicating aftershocks of major past quakes and possible active faults that may trigger future quakes. In addition, it is now possible to quickly and accurately recognize aftershock activity of major quakes. In the case of the 2004 Chūetsu Earthquake, hypocenters were found distributed in four or five fault planes.

These planes were the source of the main quake and large-scale aftershocks, by which we learned of the reactivation of a complex fault system formed when the Japan Sea expanded. With the previous observation network, it would have been considered as just a vague seismic cluster, but detailed understanding of the seismic distribution has significantly contributed to our understanding of seismic phenomena.

Impact of the Tōhoku Earthquake

The Great East Japan Earthquake of 2011 revealed the shortcomings of the field of seismology​, which had only expected the largest earthquake in this area to measure around 8 in magnitude. Until then, it was believed that earthquakes had characteristics inherent to each location, and that quakes of a similar scale occurred repeatedly. But now we recognize the diversity of quakes and know that rupture areas change with each quake.

It also showed that we do not know how big an earthquake will be at the time when rupture starts, proving the difficulty of seismic forecasting. Given this, the Japanese government has shifted the focus of its disaster preparedness system. Once based on the premise of forecasting the next Tōkai earthquake, this system now recognizes the uncertainty of forecasting and issues more immediate bulletins on Nankai Trough earthquake readiness to keep people aware of the danger.

Hi-net and GEONET enabled a major discovery with global ramifications: the existence of slow earthquakes, the seismic phenomena of fault slips that are slower than regular quakes, classified according to how slow they are. Following the world-first discovery of slow earthquakes in southwestern Japan in 1999 and 2002, they have been detected at locations worldwide. Because the origins of slow quakes adjoin hypocentral regions of megaquakes, they are believed to be related to these powerful disasters. We now know that, immediately prior to the Great East Japan Earthquake, slow quakes were taking place in the vicinity, possibly even triggering the megaquake.

The 150-station Seafloor Observation Network for Earthquakes and Tsunamis along the Japan Trench (S-net), developed by the NIED after the Tōhoku Earthquake, and other seafloor cable networks (also shown in figure 2) have revealed a diversity of slow quakes in the Japan Trench and near the Nankai Trough. Due to the possible relationship between slow quakes and megaquakes, slow quakes have been suggested as one of the criteria for issuing bulletins on Nankai Trough earthquake preparedness.

We cannot know the timing and location of fault ruptures in advance, but if we can determine the form and friction of fault planes and the manner in which force is being applied, it should be possible to assess the imminence of a quake in probabilistic terms. Observation of changes to the Earth’s crust on land and at sea has significantly boosted our understanding of how strongly plates adhere to one another at their boundaries. Using supercomputers, we can estimate the locations and degree of force active at plate boundaries, taking into consideration the subduction of oceanic plates, day-to-day crust change data, and redistribution of energy through small-scale and slow quakes.

To improve future forecast accuracy, we must use precise subsurface exploration to determine the shape of plate boundaries and the physical quantities of surrounding materials. It is also important to know when and where major historical quakes occurred, along with their scale. Research into ancient documents by historians and geological research of tsunami deposits also assist in forecasting future quakes.

Earthquake forecasting can only determine probability—there is no way to be certain that a quake will occur at a given time. But immediately after a quake begins, knowing within seconds whether it will develop into a massive tremor could help to save lives. Currently, advances are being made in research and application of such real-time information. The Japan Meteorological Agency launched its earthquake early warning service in 2007 (see figure 3). 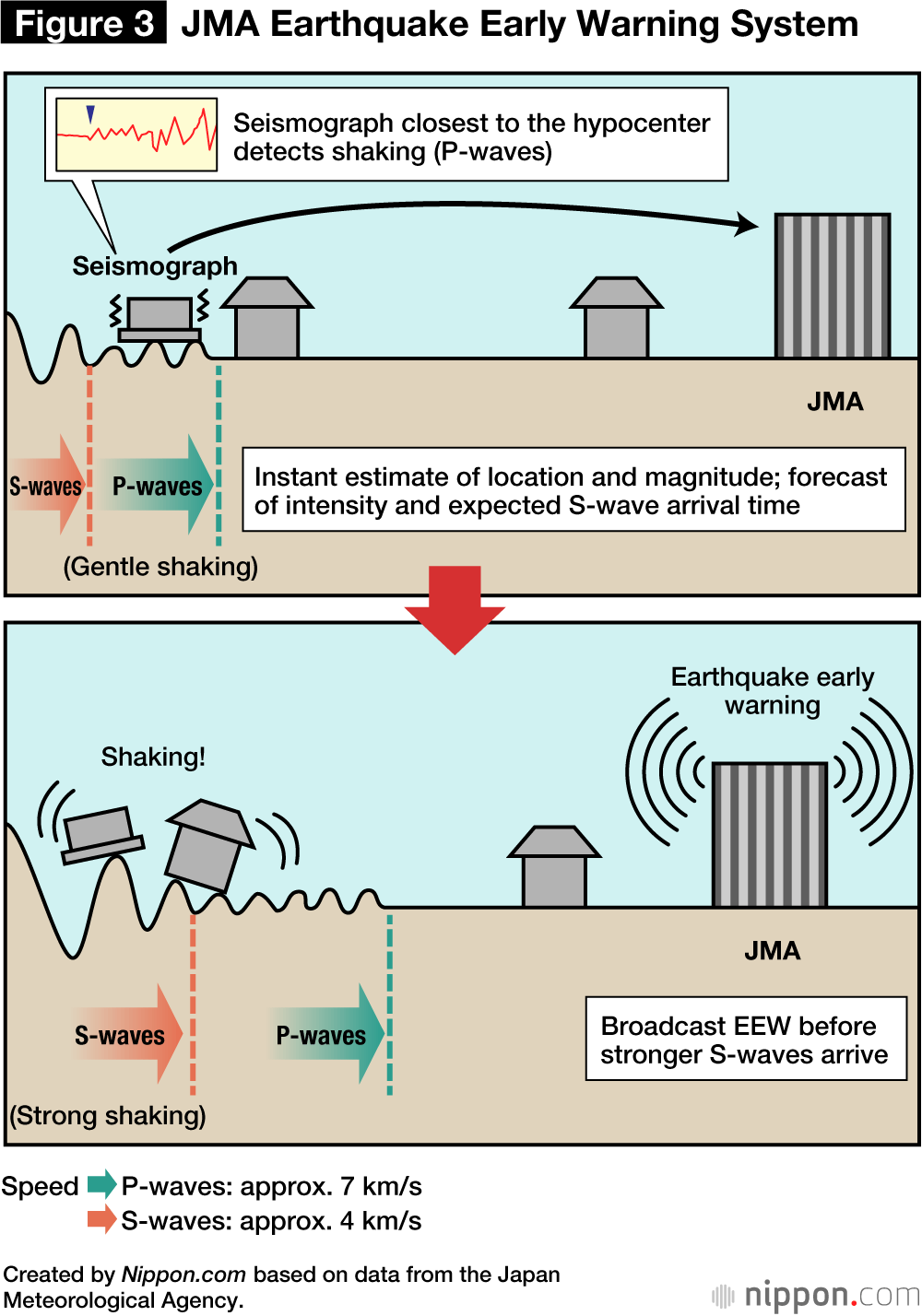 It functioned effectively in the Tōhoku region in the 2011 Tōhoku earthquake, but underestimated the shaking that impacted the Kantō region around Tokyo. The methodology employed at the time estimated the point at which the fault initially slipped to trigger the earthquake and the expected magnitude, estimating the strength of tremors at distances from that point. What it failed to consider was how far the rupture area would expand, as happened in the 2011 megaquake. Now, we incorporate a method that measures shaking at a larger range of points to estimate the tremor at the target point, boosting the system’s reliability. And new methods ate currently under development. Fault models for megaquakes are constantly being adjusted using real-time data from GEONET, and research is underway into applying this data in prompt tsunami forecasting.

The recent introduction of the MOWLAS network has aided advances in seismic research and enhanced the functionality of seismic activity status assessment, earthquake forecasting, and provision of real-time information. Such knowledge and information is essential to protect people and society as a whole. We must ensure the stable operation of the observation network underpinning this. Because megaquakes that occur at sea pose a particularly dire threat, we should further develop submarine cable systems to observe seismic and tsunami activity.

But there will be limitations no matter how far research advances, and therefore, as we obtain and apply this knowledge, we should also always be prepared to cope whenever and wherever an earthquake may strike.