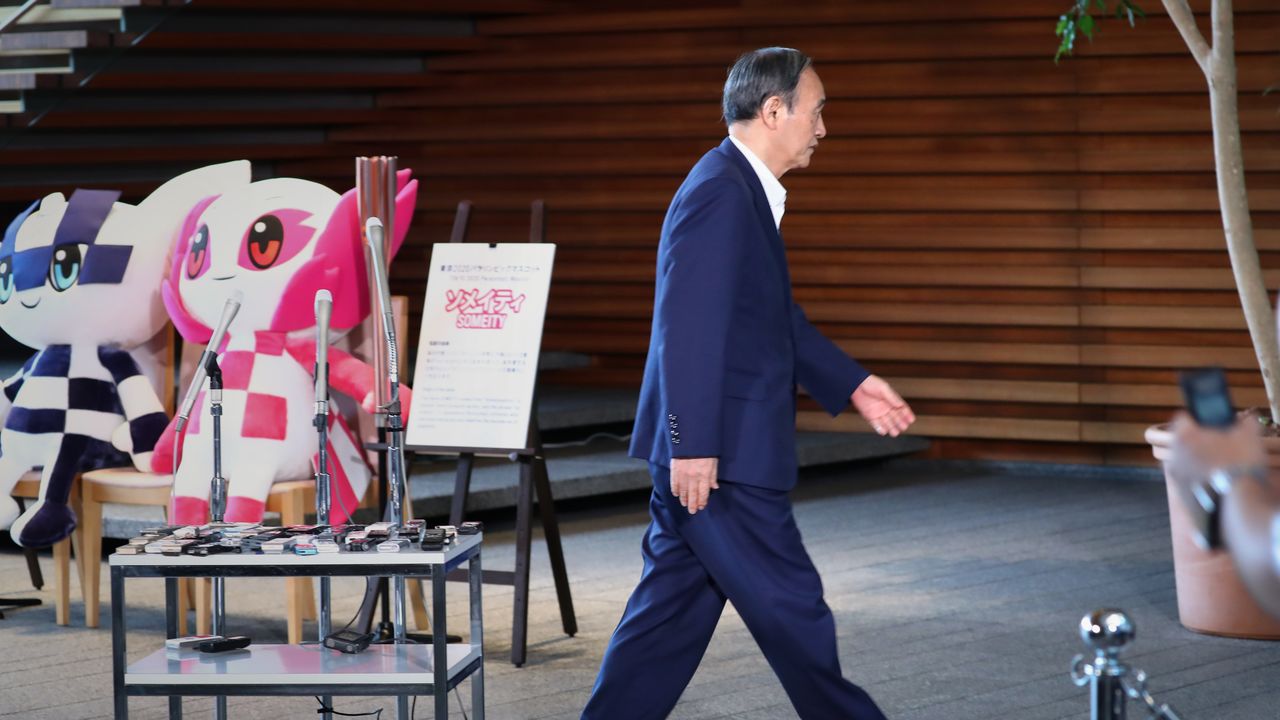 The Suga Administration’s End: Collapse at the End of Clumsy Politics

Politics Society Economy Sep 7, 2021
Prime Minister Suga Yoshihide has abruptly announced the end of his administration by signaling he will not run for the presidency of his party in the September 29 contest. A veteran journalist explores the factors behind this upheaval in Japanese politics.

Just before noon on September 3, 2021, media channels lit up with urgent headlines: “Prime Minister to Sit Out LDP Election.” I have to say that this sudden announcement by Suga Yoshihide that he would not seek reelection as the president of the Liberal Democratic Party, thereby staying on as prime minister as head of the leading party in the ruling coalition, came as little surprise. Indeed, I would have been more startled to see a newsflash stating that Suga had lined up the support of his party’s top officials and General Council to continue as party head and premier through the presidential election, slated for September 29.

Kishida Fumio, the previous chair of the LDP’s powerful Policy Research Council, threw his own hat into the ring as soon as the presidential contest schedule was announced on August 26. In the past, Kishida has been criticized as lacking in authority and resolution, but at his press conference on that day, he displayed a new forcefulness with his straightforward critiques of the Suga administration. “The LDP is supposed to be a party that puts the people first, but their voices are not reaching us today,” he argued. “Japanese democracy is facing a crisis.”

Of particular note was his proposal to reform the LDP itself. By pledging to set term limits for party executives, limiting them to three consecutive terms of one year each, he was staking out an opposing position to Nikai Toshihiro, the party kingmaker who has already served five straight years—an all-time record—as the LDP’s secretary general.

Suga, who came to power with the backing of Nikai, was quick to react. On August 30 he called Nikai to the Kantei, where he informed him of his new plan to revamp the cabinet and the LDP’s executive roster ahead of the party’s presidential contest. This strategy, which would remove Nikai from his position, was in line with the wishes of the anti-Nikai “3A” group—former Prime Minister Abe Shinzō, current Deputy Prime Minister and Minister of Finance Asō Tarō, and LDP Tax Commission Chair Amari Akira—and aimed to smooth the way to Suga’s reelection.

Reports say that Nikai responded by saying Suga was welcome to do as he saw fit. It is difficult, though, to believe that a political player as crafty as Nikai would walk away from his powerful post so willingly. He had been one of the primary movers behind the scenes in getting Suga into the Kantei in the first place, and one of the first to announce his support for the current LDP chief ahead of the upcoming presidential contest. A move to shuffle Nikai out of his post after the election might have made sense, but Suga appears to be doing things in the wrong order here.

The prime minister’s inexplicable decisions did not end there. He next began leaning toward a plan to dissolve the House of Representatives during the narrow window between the end of the COVID-19 state of emergency on September 12 and the September 17 LDP presidential contest, triggering a general election to take place on October 17. This would automatically result in the postponement of the LDP leadership vote. Given an opposition in disarray, he may have figured that if he could maintain his government’s hold on power even with the loss of some seats in the Diet, it would help him in his quest to remain president of the Liberal Democrats.

A Painful Loss in Yokohama

The political world at this point was agog at a prime minister who seemed to have gone mad with these inadvisable moves, all of which appeared geared at keeping him in his post. Even Abe Shinzō, though, a key figure in Suga’s corner, came out against his schemes, and by September 1, when the newspapers were reporting that he was considering dissolving the Diet, Suga was already backpedaling: “Given the tough coronavirus conditions we continue to face, this is hardly the time to dissolve the parliament and hold an election.”

This was the moment when Suga’s authority as prime minister began slipping through his fingers. While he did still wield power over appointments to party offices, this was in name only. His proposed changes to the party executive came as a set with the general election he intended to call, and now that he could no longer carry out the latter, there was little chance of his pushing through with the former. The game was up for him.

Underpinning Suga’s extraordinary maneuvers during this period was the impact of the Yokohama mayoral election on August 22. The LDP’s Okonogi Hachirō gave up his seat in the House of Representatives and his positions in Suga’s cabinet, including as chair of the National Public Safety Commission, to run for this office. Making matters worse for the prime minister, a supporter of the proposal to entice foreign operators to build an “integrated resort” including a casino in the city, Okonogi announced his opposition to the IR plan. Incumbent mayor Hayashi Fumiko aimed to secure her fourth term with a pledge to continue efforts to create a Yokohama casino. One outcome was an acrimonious split over the casino issue among the LDP members of the Yokohama Municipal Assembly, the body where Suga got his start in politics in 1987.

The prime minister certainly felt the sting of the setback to the IR scheme, but even more painful must have been the loss of the mayor’s office to the opposition-backed Yamanaka Takeharu. This came despite Suga’s considerable efforts to boost Okonogi’s fortunes in the contest. The premier made personal phone calls to company executives in the city and mailed out messages urging others to lend their own support, displaying an unprecedented level of involvement for a national leader in a local election. In doing so, he turned the mayoral contest into a referendum of sorts passing judgment on his national administration—a judgment that came in harshly when the political newcomer Yamanaka blasted the government for the shortcomings in its policies combating COVID-19 and beat the runner-up Okonogi by more than 180,000 votes.

The shock of this Yokohama defeat continues to ripple through the political world. On September 2, Doi Ryūsuke, secretary general of the LDP’s Kanagawa chapter, made the previously unthinkable declaration that local party members would not push for Suga’s reelection in the upcoming LDP presidential contest.

Suga’s clumsiness throughout this situation is all the stranger given his reputation as a master of behind-the-scenes political maneuvering. Politicians will of course be thrown off balance when desperate conditions place them in danger of losing their office. But in the prime minister’s case, there is a more fundamental structural issue at work: the lack of a talented spin doctor to adjust his public presentation. During his second administration, Prime Minister Abe was supported by Imai Takaya, a former Ministry of Economy, Trade, and Industry official, in this role; Koizumi Jun’ichirō, who also enjoyed a lengthy term in office as prime minister, was similarly served by Iijima Isao. These men led the Kantei’s secretarial staff in producing advantageous public images for the prime minister, from the big picture down to the fine-grained details.

Dangers in the One-Man Band Approach

Suga, however, has no such support. Nitta Shōbun, brought along from Suga’s lower house office to serve as the prime minister’s secretary for political affairs, is the sort of assistant who does only what he is told; he mainly handles Suga’s daily scheduling, and was sent to Yokohama to hand out leaflets ahead of the recent mayoral election. A more capable secretary, Teraoka Mitsuhiro from the Ministry of Finance, was the political secretary for a time, but he was never able to wield enough influence or build deep enough trust with the prime minister to be given any measure of control over how he presented himself in words or actions.

As assistants to the prime minister, others like Izumi Hiroto (hailing from the Ministry of Land, Infrastructure, and Transportation) and Sugita Kazuhiro (National Police Agency) built reputations as trusted confidants to Suga within the Kantei organization, but their service has marked them as loyal aides following orders; they, too, have not stepped into the role of spin doctor.

It bears remembering that Suga is the sort of politician who worked his way up from those early days in the Yokohama assembly, doing it all himself the whole way. He is not the sort of person who can manage a larger organization in a systematic, hands-off way. This approach served him well up through his years as chief cabinet secretary to Abe, but now that he himself is prime minister, it can serve him no longer. As the leader of the entire nation, his actions now touch every facet of life in it, and his words are set down for future historians to study.

The limitations to his one-man band approach became crystal clear in his comments on the end of operations to evacuate Japanese nationals from Afghanistan. At a September 1 media appearance, when a journalist asked whether the government’s response had been appropriate, he replied: “The number-one goal of this operation was to secure the safety of Japanese citizens. In that sense, I feel it went well.” This was despite the fact that the Self-Defense Forces had managed to bring out just a single Japanese; the original plan to rescue several hundred people, including Afghans who had assisted the Japanese in their operations in the country and their family members, ended in failure. This was a situation where the prime minister of Japan should have promised: “Nobody who helped Japan will be left behind.”

Suga’s focus may have been scattered by his concerns about the upcoming LDP leadership contest, but this is still far from the sort of comment we should be hearing from the leader of a major nation at a critical moment. Sadly, part of the responsibility for this lies with the staff around him.

How to Walk Away

On September 3, when Prime Minister Suga announced he would not run for reelection as LDP president, the Tokyo 2020 Paralympic Games were still going on. That this international sporting event was happening at all was in part because of Suga’s own obstinate determination to see it through, even at the cost of the divisive arguments this triggered in Japanese society over whether the games were a good idea during a pandemic. But now, even though his own clumsy scheduling had brought him to this impasse, he gave no thought whatsoever to the possibility of waiting a few more days until the closing ceremony had finished.

In the end, Suga’s decisions have created a month-long blank spot in Japanese political authority. The vote to select a new leader for the LDP takes place on September 29, meaning that even if the winner is swiftly tapped to be the next prime minister, we have almost a month to go until the next cabinet is formed and goes to work. Had Suga been more aware of his duties as the leader of the national administration, he would have requested that his party move forward the schedule for its leadership contest as soon as he indicated he would not be taking part, in the interest of making this blank spot as short as possible. Instead, we are left with a fundamental problem: Can the lame-duck Suga administration be counted on to responsibly handle a major disaster or military emergency, should one arise during this period?

(Originally written in Japanese. Banner photo: On September 3, 2021, Prime Minister Suga Yoshihide walks away after explaining to the assembled press that he will not seek reelection in the LDP presidential contest scheduled for the end of the month, effectively announcing the end of his administration. © Jiji.)