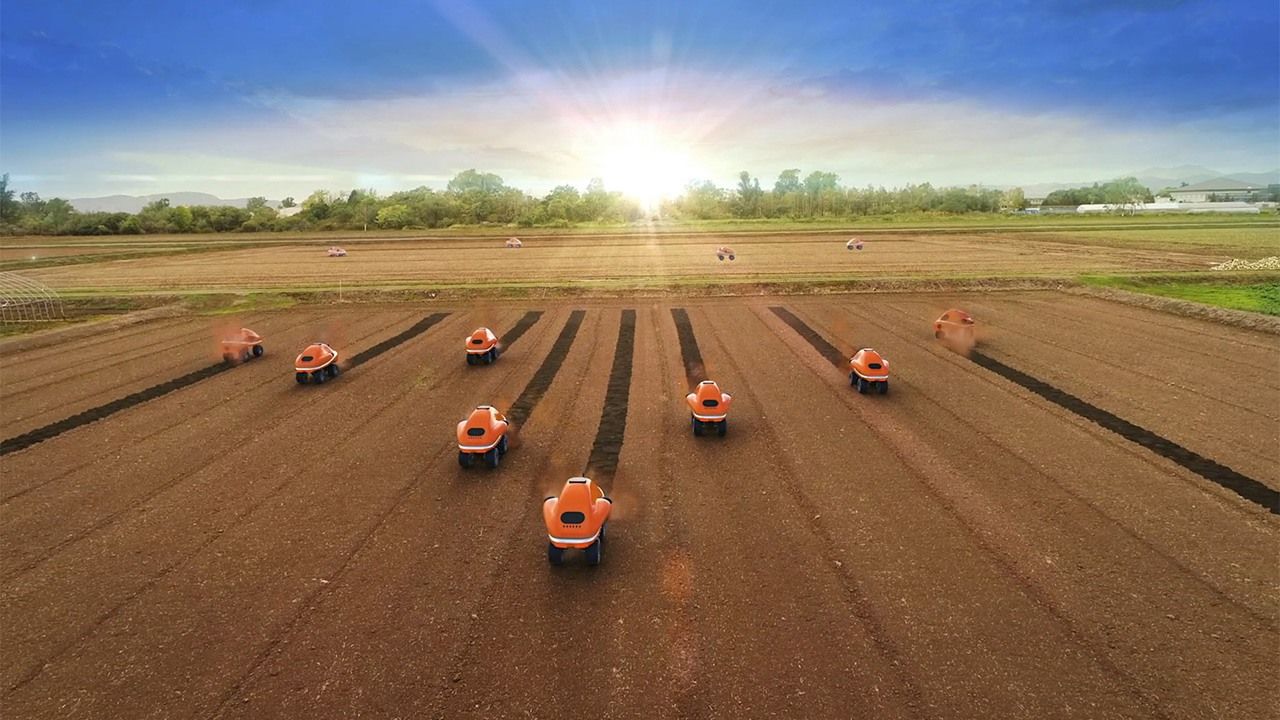 Economy Technology Work Nov 11, 2021
Smart farming, which applies technologies like robots and AI to agriculture, has been heralded as a way for Japan to counter its dwindling and aging population of growers. An agricultural science expert looks at how new innovations and the internet of things are changing agribusiness, and how these trends will transform the industry.

Japan’s agriculture sector is facing a dire labor shortage brought on by the country’s aging and dwindling farming population. Since 2015, the number of farmers in the country has fallen by 22.4%, while over the same period the average age of growers has increased by 0.8 years to 67.8. As these trends are only expected to worsen going forward, so-called smart farming that utilizes robots and other labor-saving technologies is coming to be seen as vital for the wellbeing of the industry.

In other parts of the world as well, scientists are exploring high-tech solutions to deal with the dire effects of climate change on agriculture, including drought and the loss of arable land to desertification, and to meet the increasing food demands of the growing global population. As technologies advance, smart farming is transforming agriculture from a practice heavily reliant on the experience and intuition of growers to a data-driven industry, opening it up to broader range of participation in the process. Below I delve into the rapid rise of smart agriculture in Japan and elsewhere and consider its future prospects.

A defining characteristic of smart agriculture is the use of technology to better plan and manage crops. This includes utilizing satellite imagery to determine soil characteristics, monitor plant development, and estimate yields as well as analyzing data on weather patterns to manage crops and employing drones and high-tech harvesters. Armed with these tools, growers are able to develop more efficient practices, such as precisely applying agricultural chemicals like pesticides and fertilizer, that save time and energy while boosting outputs.

Another prominent feature of smart farming is its ability to benefit individual farmers along with entire agricultural communities by increasing productivity and bolstering the economic clout of growers. Rice farmers, for instance, can use real-time maps based on data from satellite imagery to more accurately monitor nitrogen levels of juvenile plants as they develop and then apply fertilizers as needed. Producers can also utilize satellite technology to ascertain the level of protein in rice kernels, an important indicator of flavor, helping them gauge the optimal time to harvest. Adjusting practices according to the latest data will produce larger and higher-quality yields while keeping output consistent from season to season. It will also make it easier to control for specific qualities and characteristics, opening the way for the development of regional brands of rice and other farm products with more nationwide marketability.

Agricultural branding is a lucrative prospect for producers, as it opens up their goods to a broader range of consumers, both in Japan and overseas. Smart farming helps local growers build and sustain their brands by giving them more control over factors like quality and yield, making it possible for them to better meet the needs and demands of customers. Moreover, farmers in these areas can utilize smart technologies like growth simulations based on weather information and remote sensing of crops to coordinate harvesting and shipping times among themselves and with distributors and processors, keeping a steady supply of products available while lowering logistics costs.

Japanese farmers already have access to a wide array of data on factors like weather patterns, soil types, growing conditions, and crop management. However, information is spread across different platforms, and until fairly recently there was no way for producers to access the far-flung data in a simple and cost-effective manner. To remedy the situation, the National Agriculture and Food Research Organization developed an agricultural data collaboration platform, which it launched in 2019. Dubbed Wagri—a portmanteau combining the Japanese term wa, meaning “harmony,” and agriculture—it collects and organizes agriculture-related data scattered across various databases and websites. The system makes it easy for farmers to access specialized information, both public and private, at low cost to manage crops, along with data from IT vendors and manufacturers of farm equipment.

Another core aspect of smart farming is the automation of agricultural equipment. Our team at Hokkaidō University’s Laboratory of Vehicle Robotics was involved in the development of Japan’s first fully self-driving tractor, which became commercially available in 2018. Differing from the remote-controlled tractors and rice-planting machines already in use, the model is equipped with as sensors and software enabling it to stop automatically when an obstacle is detected, as well as other features allowing it to be operated safely without any human input whatsoever. Although autonomous, the robot tractors can only be operated if a person is stationed nearby to watch over their activities.

Advances in technology have continued to expand the range of automated farming equipment on the market. New offerings include a self-governing mower that trims the embankments between fields and a robot that prunes and harvests the leaves of tea plants. Looking toward the next generation of autonomous equipment, industry, universities, and the government are working closely together to develop field robots that can be remotely monitored and are capable of fully independent navigation. 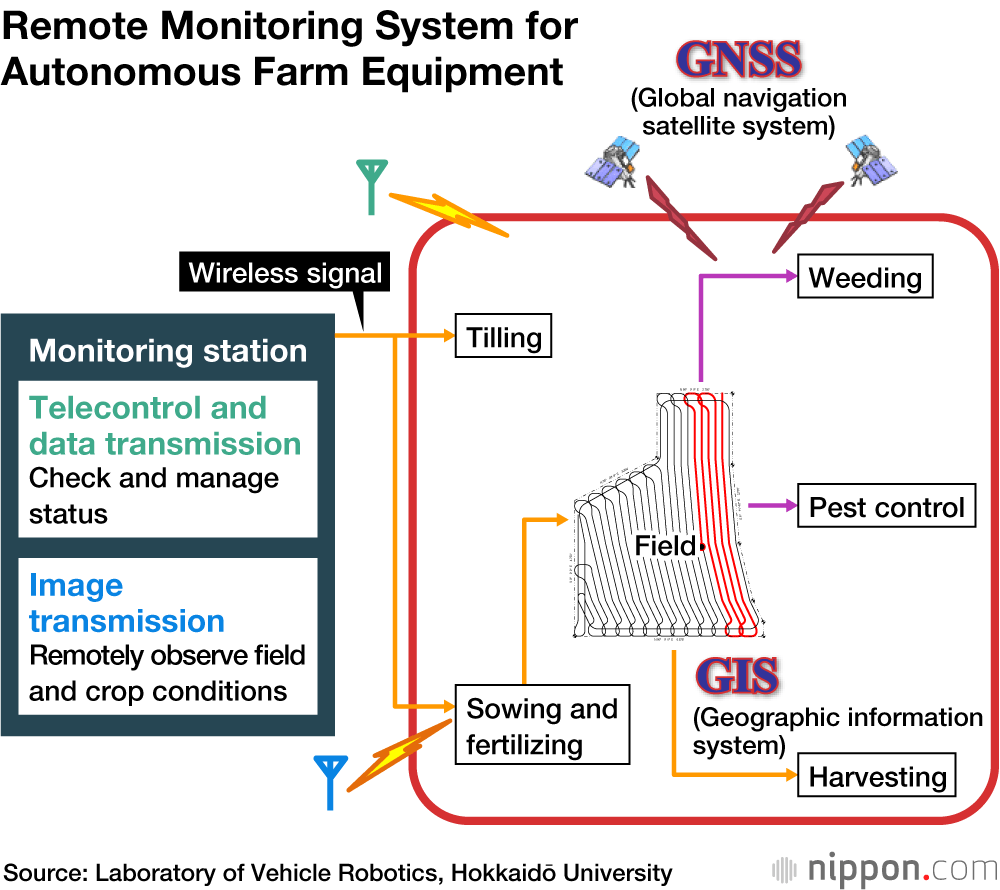 Autonomous field robots linked to a remote monitoring system could significantly improve efficiency. Robots would move between rows and even fields on their own, with a single individual at a monitoring station managing their activities in different areas simultaneously. Recent research has focused on large-scale use of field robots equipped with 5G and AI technology and relying on high-definition imagery to carry out precise tasks like targeted fertilizing and swiftly identifying and removing diseased plants and pests. This is only the tip of the iceberg in terms of the potential of these technologies. Edge computing, which allows for the quick analysis of information sent over 5G networks, is ushering in a new era of smart farming by making the complex systems required to manage multiple groups of field robots possible. 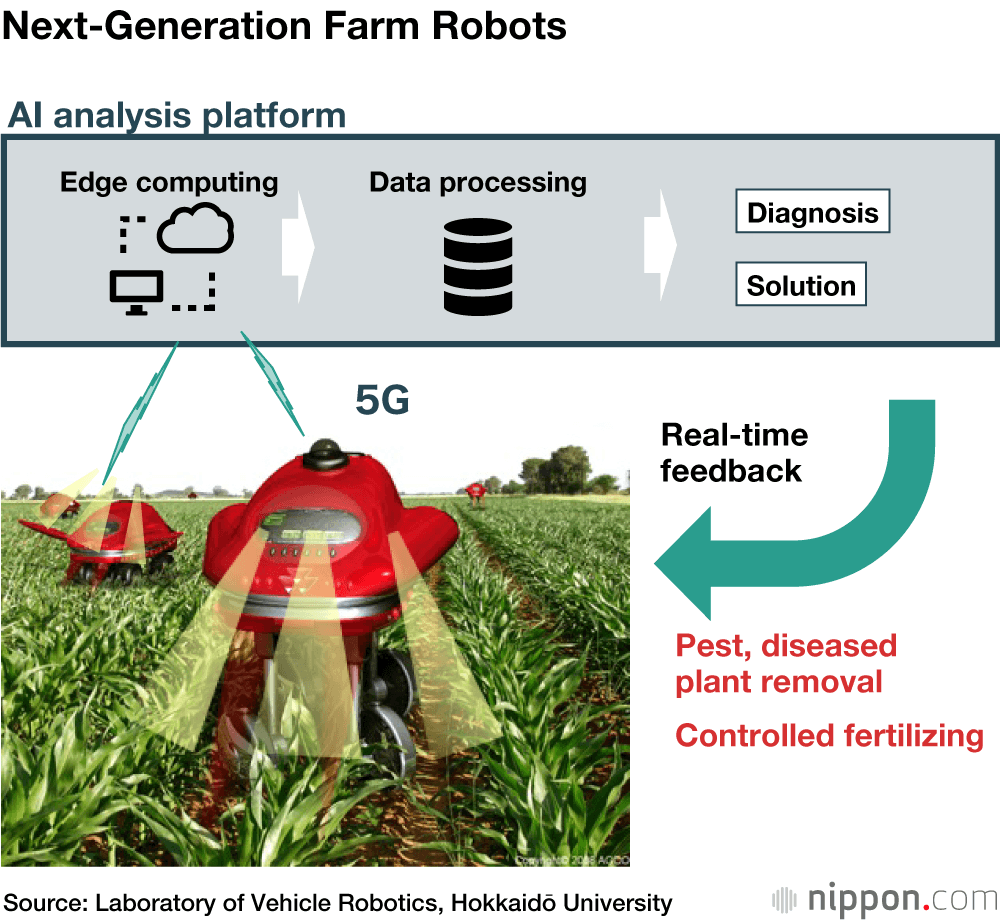 A great deal of energy in Japan and elsewhere is being directed toward the development of robot harvesters for crops like strawberries, tomatoes, and asparagus that have traditionally had to be picked by hand. There are three elements core to the effective functioning of autonomous harvesters—sensing, handling, and driving—and the first two are most crucial. Developing robots that are able to sense when a piece of fruit or other produce is ripe and gauge its position accurately poses a massive technical challenge.

Then there is also the issue that once harvested, items need to be quickly sorted in a manner that does not bruise or other otherwise damage them. Helping drive development is the lucrative market for strawberries and other high-end Japanese fruits in countries in Asia and Oceania, which has the Japanese farming industry pinning its hopes on the introduction of harvester robots to enable growers to meet the expected growth in demand. 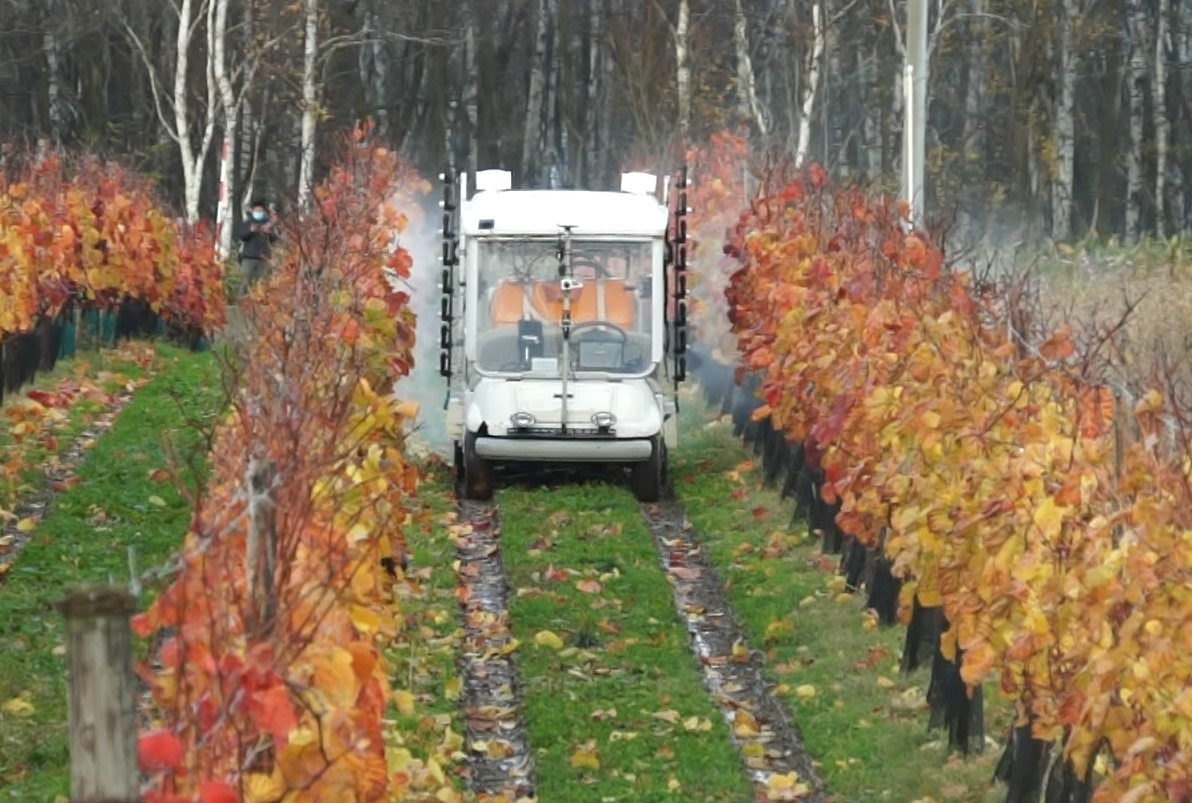 Along with farm produce, there are growing opportunities for Japan to export smart agriculture technology itself. One area where it has an advantage is in the development of small, self-driving tractors. Japanese farms are typically more compact than the sprawling tracts of agriculture land common overseas and so have less need for large equipment. In North America and Europe, the use of oversized tractors and combines has come under scrutiny for the amount of fuel consumed and the detrimental effects on crops from soil compaction. In fact, upward of 90% of the energy costs of running tractors come from the need to loosen hardened soil, making smaller models and those running on electricity attractive options for farmers wanting to reduce their overhead. There is also the issue of moving large, unwieldy equipment between fields, particularly in light of traffic rules in some countries banning such vehicles from public roads.

In 2017, Britain’s Harper Adams University utilized a small Japanese-built tractor in its Hands Free Hectare project, which aims to complete a fully autonomous cropping cycle, from tilling to harvesting, on a 100-meter-square plot of land. The initiative uses the strengths of fully autonomous agricultural robots, with the end goal being to build a scalable system. In North America and Europe, the drive for automation is focused on improving crop development, with the greatest need being for robots that are able to carry out tasks unsuited to conventional equipment and that can replace particularly costly and time-consuming labor. Interest is particularly high in the development of systems featuring small, electrified vehicles that are energy efficient and easy to maintain, do not overly compact the soil, are safe and inexpensive to manage, and can operate in any type of weather. Similarly, there is a global push toward developing systems capable of coordinating armies of small robots to perform very precise agricultural work. 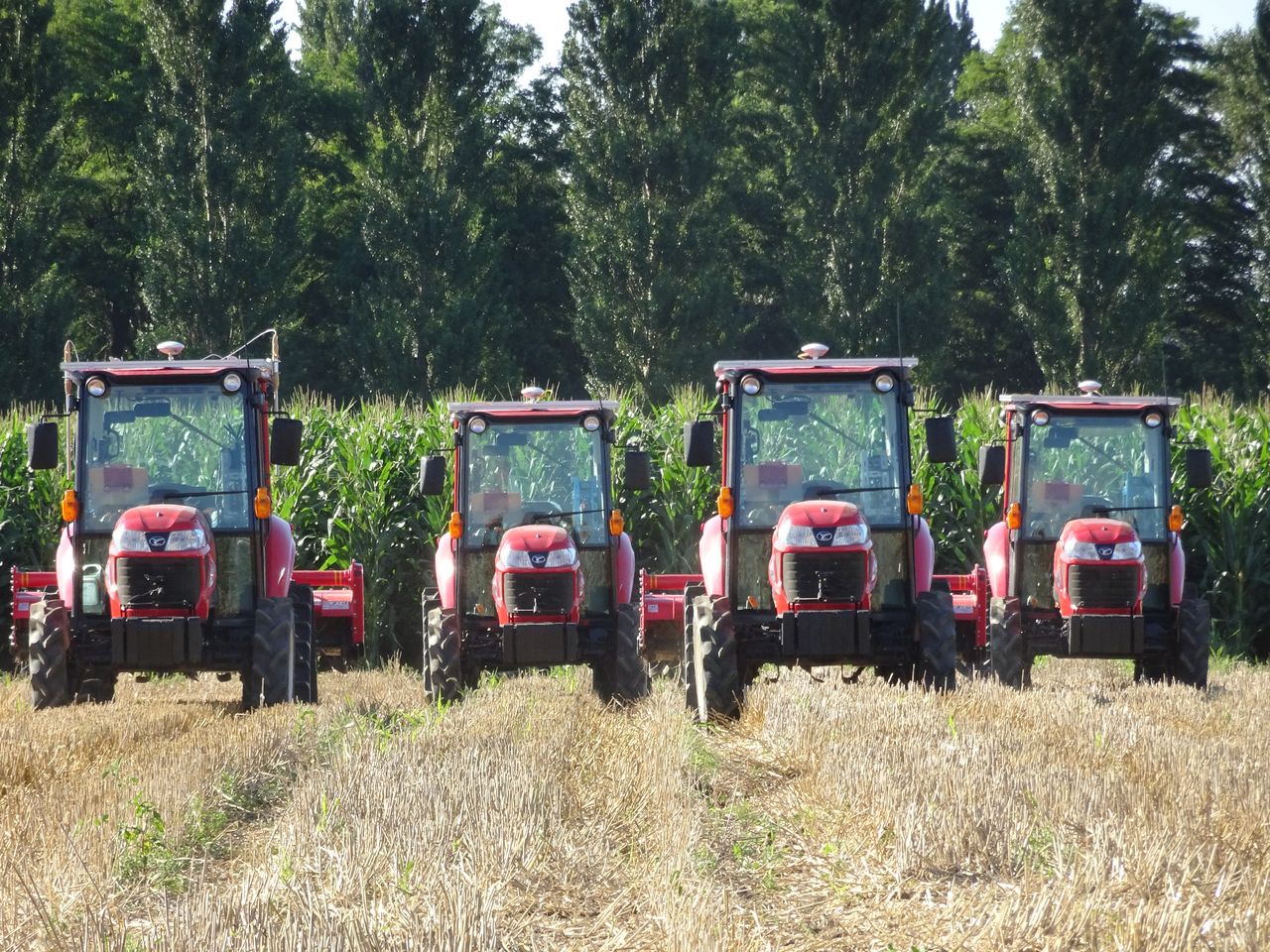 Fully autonomous tractors prepare to till a field in tandem. (© Noguchi Noboru)

The merits of smart farming for Japanese farmers are plentiful. These include resolving the labor shortage, digitally preserving and passing on agricultural know-how, reducing production costs, increasing the quality and amount of yields, promoting a shift from a “product-out” approach of achieving produce standards set on the growing side to a “market-in” style that considers the needs of consumers, and broadening the appeal of farming. The transition will not take place overnight, though, particularly as it will take time to convince producers that the benefits to their business from investing in smart systems are worth the cost. This is especially true in areas where crops and farming techniques have developed in response to local conditions, making it essential to tailor smart agriculture technologies to regional needs.

There is no denying that smart farming is marching quickly forward. To keep up to speed, stakeholders like local governments, agricultural development and extension centers in each prefecture, the Japan Agricultural Cooperatives group, and producers must keep a close eye on new developments in the rapidly changing field of smart agriculture.