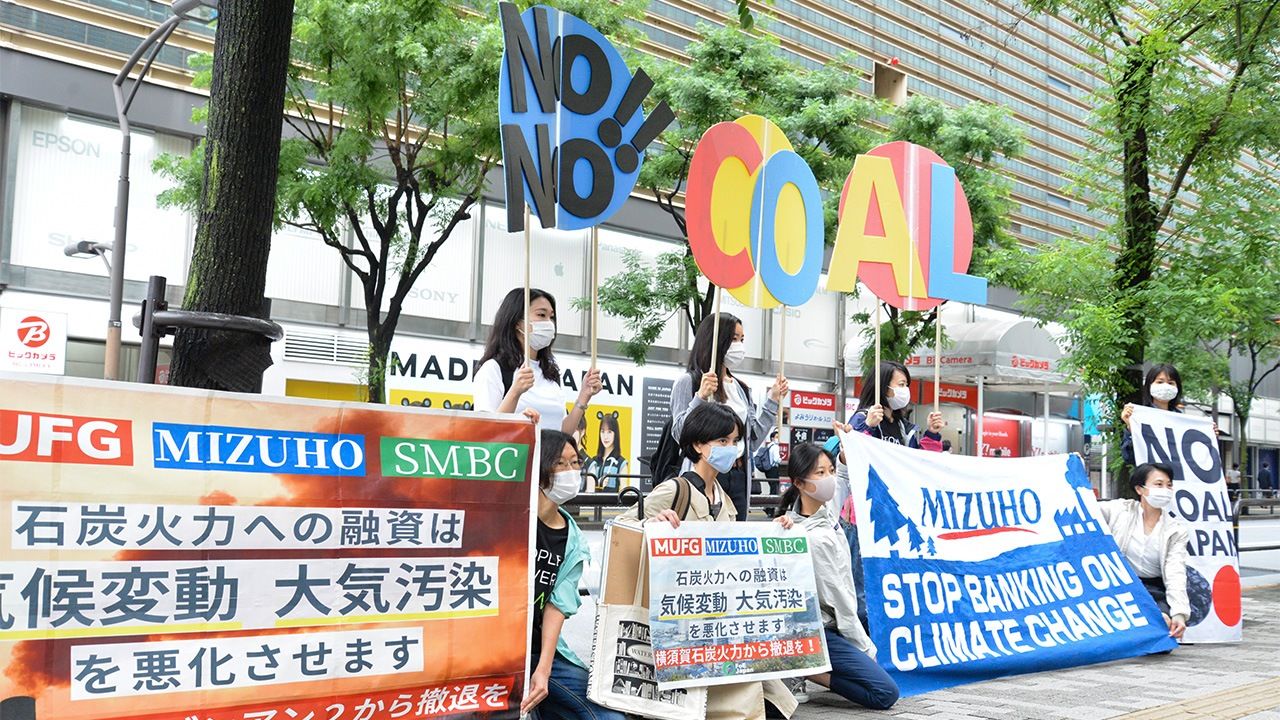 In October 2020, former Prime Minister Suga Yoshihide made headlines with his surprise pledge to reduce Japan’s net greenhouse gas emissions to zero by 2050. The declaration helped spur a raft of new carbon-reduction commitments by Japanese corporations, as well as promises by financial institutions to limit their financing of coal-based energy projects. These are the sort of “nonstate actors” that have been spotlighted of late for their crucial role in the fight against climate change.

But government leadership is required to sustain and accelerate such action. In fact, it is essential to the kind of energy transformation needed to achieve carbon neutrality by 2050. Unfortunately, the new Strategic Energy Plan drafted by the Ministry of Economy, Trade, and Industry fails to offer such leadership, and the prospects for meaningful progress under Suga’s successor, Prime Minister Kishida Fumio, are uncertain at best.

Suga on the Bandwagon

In the months leading up to March 2021, policy makers in the West announced plans to revise their national emissions-reduction targets upward amid a mounting sense of crisis over the frequency of extreme weather events and other climate-related disasters. The European Union had made environmental action a core element of its pandemic recovery plan, and the administration of President Joe Biden had put climate change back on the US policy agenda. Under pressure to do likewise, the Suga cabinet announced in March that it was boosting Japan’s 2030 emissions-reduction target to 46% from 2013 levels, up from its previous target of 26%. In Japan, many hailed the new goal as “ambitious.”

From a strictly domestic standpoint, it is a substantial increase, especially given that METI had previously declared 39% the maximum feasible reduction. From an international perspective, however, it is much less impressive. For its baseline, Japan has chosen 2013, a year when carbon dioxide emissions were especially high owing to a spike in oil and coal use in the wake of the 2011 Fukushima nuclear power plant accident, which led to the shutdown of reactors nationwide. Keyed to pre-Fukushima levels, Japan’s 2030 target amounts to only a 42% decrease. This is substantially below the revised US and EU commitments, and it also falls short of the 45% reduction from 2010 levels that the Intergovernmental Panel on Climate Change has estimated is needed to keep global warming within 1.5 degrees Celsius, as per the Paris Agreement.

In fact, based on how much CO2 Japan has emitted until now and its current rank as the world’s fifth-largest greenhouse gas emitter, Climate Action Tracker estimates that the nation needs to reduce emissions 60% from 2010 levels in order to pull its weight under the Paris Agreement. Seen in this light, Tokyo’s revised 2030 commitment is distinctly underwhelming. Perhaps it was to deflect such criticism that Prime Minister Suga added that Japan would “aim even higher, toward 50 percent.” But no one in Japan takes this as an actual target.

Wedded to Coal and Nuclear

In August 2021, METI released its draft of the sixth Strategic Energy Plan, which is expected to be approved by a cabinet decision shortly. As the basic document guiding Japan’s medium-to-long-term energy policy, the Strategic Energy Plan was supposed to chart the route by which Japan would achieve the government’s “ambitious” 2030 emissions reduction commitment and its further goal of net zero emissions by 2050. Unfortunately, the plan is deeply flawed.

One issue is the target for transitioning to renewable energy. The current (2018) plan called for boosting the share of renewables (including large-scale hydropower) in Japan’s power mix to 22%–24% by 2030. The new plan, citing the goal of carbon neutrality by 2050, raises that target to 36%–38%. This is an improvement, of course, but still far below Japan’s potential for solar and wind power generation, according to most estimates. Moreover, it pales by comparison with the current and planned use of renewables in other developed countries, particularly in Europe.

But an even bigger problem with the latest energy plan from the standpoint of stemming global warming is Japan’s ongoing attachment to coal-fired thermal power generation. The draft characterizes coal as “an important energy source that excels in terms of stability and costs” and makes clear that Japan will continue to make use of it even after 2030. In this respect as well, Japan is badly out of step with international trends. UN Secretary-General António Guterres has called on the world’s industrial countries, and particularly the Group of Seven, to phase out coal by 2030. As more and more countries heed that call, Japan has been justly criticized for its unrepentant “coal addiction.”

A third problem with the new energy plan pertains to its targets for nuclear energy. Even while calling for gradual denuclearization in the wake of the 2011 Fukushima accident, the plan gives nuclear power high marks as a “low-carbon quasi-domestic energy source” with “low and stable operating costs” and positions it as an “important baseload power source contributing to the stability of Japan’s long-term energy supply-and-demand structure.” In the latest plan, nuclear power’s share of the 2030 power mix is the same as that proposed under the current plan: 20%–22%. Yet this target has been almost unanimously dismissed as unachievable.

Nuclear energy accounted for 25%–30% of the power generated in Japan before 2011, but that share plunged after the Fukushima accident prompted the shutdown of the nation’s nuclear reactors. Faced with lawsuits and opposition from local communities, as well as stringent and costly new safety standards, the utilities have been slow to resume operations. More than a decade after the accident, only a fraction of Japan’s operable nuclear power reactors are actually operating, and nuclear’s share of the power mix has barely risen above 7%. To increase that share threefold over the next decade would be virtually impossible. With recent METI estimates indicating that nuclear energy will cost more to produce than solar by 2030, surely it would make more sense to invest our resources in renewables than to pin unrealistic hopes on nuclear power.

A fundamental change in Japan’s energy supply-and-demand structure is needed if we are to achieve the goal of carbon neutrality by 2050. But Japanese energy policy remains bound to an antiquated model under the persistent influence of vested interests at the national and local level. Instead of signaling to industry and society a firm resolve to overhaul Japan’s energy system in pursuit of carbon neutrality, the new Strategic Energy Plan epitomizes the government’s inability to spearhead transformative change.

The same lack of leadership is seen in the government’s failure to provide meaningful economic incentives for decarbonization in the form of carbon pricing.

In the EU, where carbon pricing is viewed as a key component of decarbonization policy, many countries have imposed a substantial carbon tax. South Korea instituted emissions trading (another carbon pricing option) in 2015, and China launched a national carbon market in February 2021.

By contrast, Japan’s Global Warming Countermeasures Tax, adopted in 2012, is levied upstream on fossil fuels at the very low rate of ¥298 per ton of CO2, with no increases scheduled. Compared with Europe’s carbon pricing schemes, it is a half-measure with negligible impact on the nation’s energy choices. 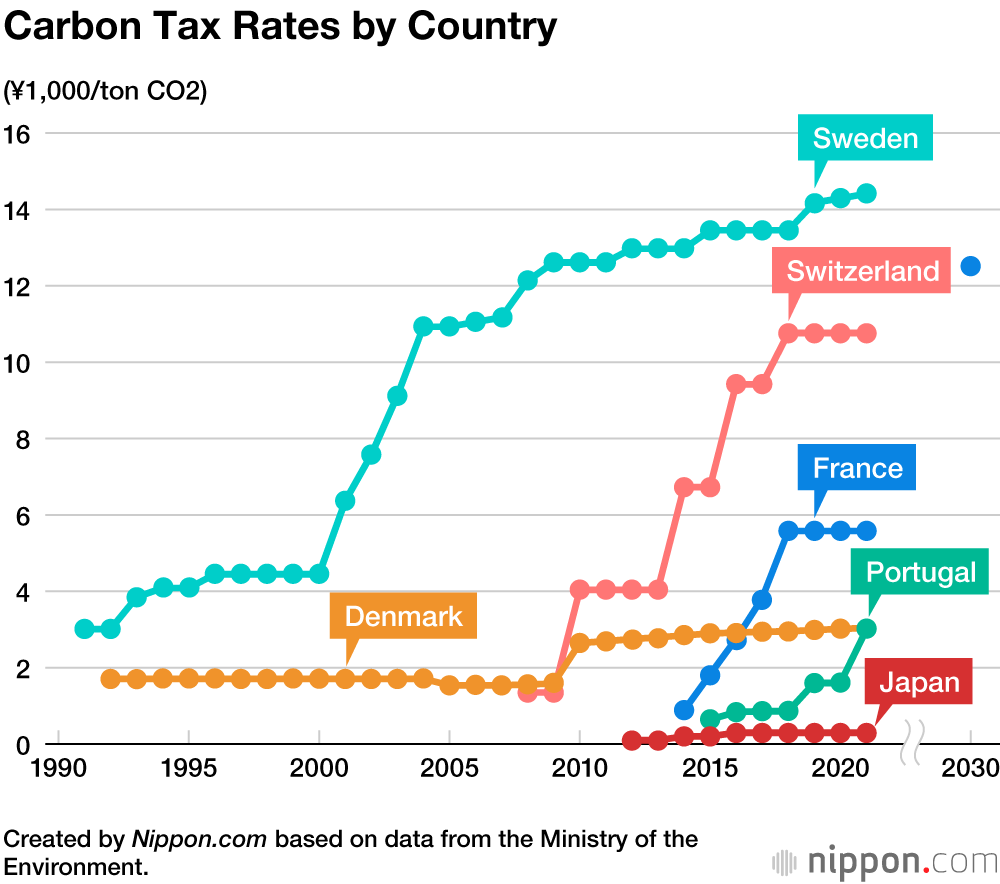 In December 2020, Prime Minister Suga instructed METI and the Ministry of the Environment to get to work drafting “a carbon pricing scheme that contributes to economic growth.” Almost a year later, those deliberations drag on, with no resolution in sight.

Suga was at least moving in the right direction, even in the face of fierce opposition from powerful business interests. As fate would have it, however, the curtain fell on his administration before it was able to take meaningful action. In September 2021, the embattled Suga announced that he would not run for another term as head of the ruling Liberal Democratic Party. In the LDP leadership election later that month, Kishida Fumio defeated State Minister Kōno Tarō, an influential voice for the expansion of renewable energy. Under Prime Minister Kishida, both Kōno and former Environment Minister Koizumi Shinjirō—another advocate for renewables—have been relegated to the wings.

Judging from past statements, Prime Minister Kishida is both less knowledgeable and less concerned about climate change than Suga. During the LDP race, he voiced support for nuclear energy but had little to say on the broader issue of policies to address the climate crisis. (Indeed, the lack of debate on the topic stood in sharp contrast to the focus on environmental issues in Germany’s federal election, held around the same time.)

The carbon tax is not the only item of unfinished business left by Suga in the wake of his net zero declaration. Achieving carbon neutrality will require policy action on many fronts, from measures to hasten the shift to renewables and boost energy efficiency to new regulations and programs promoting decarbonization in the automotive and transportation sectors.

The concern is that under the Kishida government, Japan will not merely spin its wheels on climate action but actually shift into reverse. Kishida’s minister for economic revitalization, Yamagiwa Daishirō, is known for his opposition to the carbon tax. With the departure of the Suga cabinet, prospects for full-scale carbon pricing in Japan have become more remote than ever.

The policy gap between Japan and other developed countries has grown increasingly conspicuous over the past 10 to 20 years, and unless the new Kishida cabinet honors the commitments of the previous administration, it will widen even further. With the fight against climate change topping the global agenda, Japan’s international prestige is bound to suffer. Moreover, in the absence of policy support for decarbonization, Japanese industry will fall behind the competition and miss key opportunities for growth. On the eve of the 2021 UN Climate Conference in Glasgow, the new Kishida cabinet would do well to contemplate the consequences of inaction.