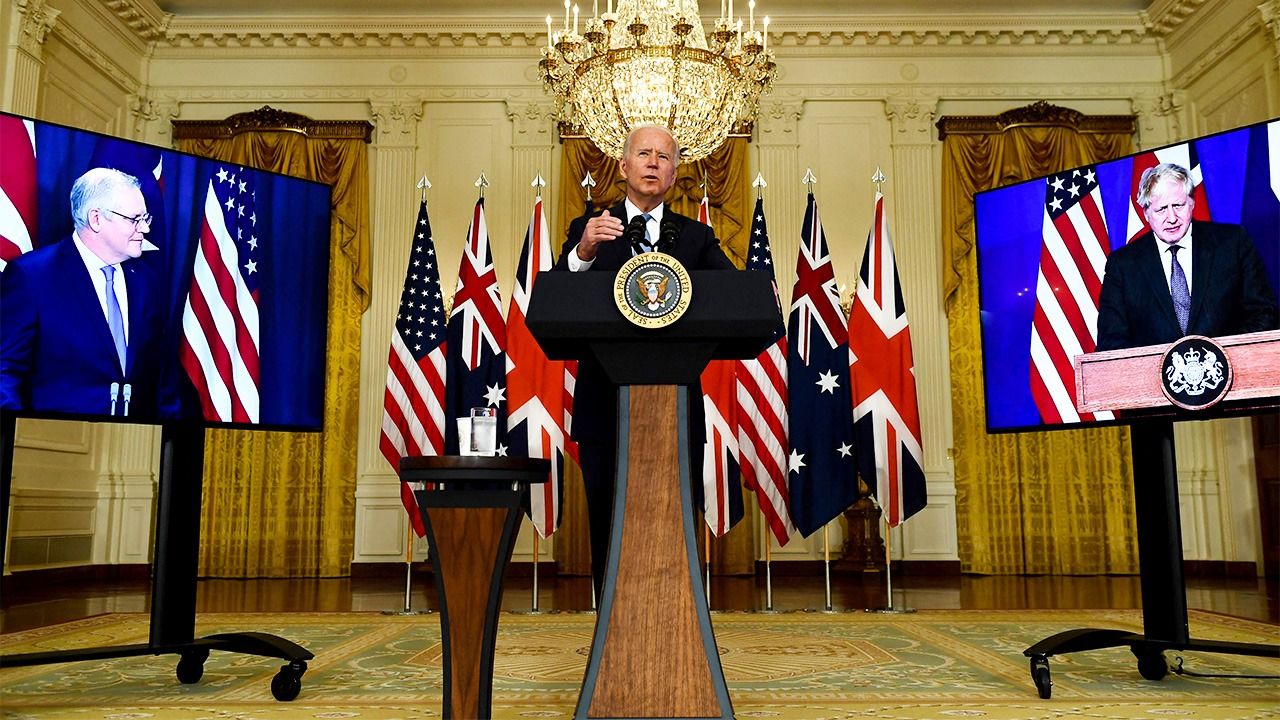 World Dec 2, 2021
The furious reaction of Paris to Canberra’s cancellation of the $65 billion Australia-France submarine contract went as far as the French government recalling its ambassadors from Canberra and Washington DC. Why did Canberra still go forward with a decision guaranteed to be met with outrage? Military journalist Nose Nobuyuki explains.

The Australian government informed the French government that it would cancel the nuclear submarine contract signed by the two countries in 2019 just a few hours before announcing a new strategic grouping that left out France on September 16, 2021. The Joint Leaders Statement on AUKUS by US President Joe Biden, UK Prime Minister Boris Johnson, and Australian Prime Minister Scott Morrison rocked Paris. The French government made severe diplomatic protests , recalling its ambassadors in Canberra and Washington DC. Even now, relations remain frayed.

What is AUKUS and what does it have to do with the timing of Canberra’s cancellation of its French submarine contract? This new military partnership comprises Australia, the United Kingdom, and the United States. While not explicitly stated as such, this coalition is a reaction to China’s increasingly destabilizing military activity throughout the Indo-Pacific region.

Australia adopted such timing out of concern for maintaining the secrecy of its negotiations with Britain and United States. AUKUS’s first initiative would, after all, be a delicate one, where Australia would switch, with British and American assistance, from diesel-electric conventionally powered submarines constructed with France to submarines using range-enhancing nuclear power generation.

The Royal Australian Navy currently fields six Collins-class conventionally powered submarines. Based on a design from the Swedish company Kockums, the first Collins was commissioned in 1996. Distinctive in appearance, what is most notable about the submarines is their onboard systems. Starting in 2006, the RAN installed the AN/BYG-1 combat control system also used by the US Navy’s modified Ohio-class cruise missile submarines (SSGNs, where SS stands for submarine, G for the guided missiles the vessel carries, and N for nuclear-powered), and Virginia, Seawolf, and Los Angeles–class attack submarines (SSNs).

The Collins-class submarine is the only non-American submarine to have been allowed to install the AN/BYG-1 systems. This allows the RAN submarines to carry and use weapons such as Harpoon antiship missiles and Mark 48 torpedoes common to US Navy systems. Australia’s SEA 1000 Attack Class Future Submarine project to replace the Collins-class submarine in the 2020s and 2030s also specified the use of AN/BYG-1 as the combat control system, alongside a variant of the Mark 48 torpedo.

What kind of submarine did the Australian government envisage the SEA 1000 project would produce? The Australian government’s official website for the project at its start, in the section titled “The Basics,” describes submarines equipped with modern weapons and on-board systems are military platforms capable of attacking “targets under or on the water, on the shoreline or far inland” in addition to being able to “loiter near a coastline to gather valuable intelligence.”

The torpedo designated by the Australian government for SEA 1000 was the Mark 48 Mod 7 Common Broadband Advanced Sonar System torpedo. Jointly developed by the US and Australian navies, this torpedo’s CBASS guidance control system has wider sonar bandwidth and can function at depths much greater than 365 meters. More resistant to enemy countermeasures, the CBASS torpedo variant can be optimized for targeting fast, deep-diving diving submarines or slow-moving submarines and surface ships in shallow waters.

Three countries eventually submitted proposals to design and co-produce conventionally powered submarines with Australia. Japan proposed a modification of its Sōryū-class submarines (16SS), Germany crafted a bid based on its Type 216, and France put forward its Shortfin Barracuda Block 1A variant. The French proposal prevailed in 2016.

The Australian government then conducted a complex Competitive Evaluation Process for its Future Submarine Program headed up by a RAN rear admiral and a retired rear admiral of the US Navy. The American had previously been involved in the Ohio-class ballistic missile submarine project. The CEP process was also overseen by an independent expert advisory panel chaired by a former US secretary of the Navy, and whose members also included a retired lieutenant commander and rear admiral from the US Navy.

Since the start, the Australian Department of Defense has had trouble coordinating the Attack-class project. The Diplomat reported in early 2020 that the project had missed two preliminary milestones in the initial stages of submarine design, namely a “Concept Studies Review” and a “Systems Requirements Review.” The DoD notified the RAN in September 2019 that the design schedule had been extended by nine months, while a January 2020 ANAO report stated: “The program is currently experiencing a nine-month delay in the design phase against Defense’s pre-design contract estimates.”

Furthermore, negotiations for the Strategic Partnership Agreement between the Australian government and the French state-owned submarine builder initiated in 2017, and initially expected to have been finished by September 2018, had seen delays. The Diplomat notes this was “due to various disagreements over intellectual property and warranty periods for defects,” and possible production delays. These developments caused the SPA signing date to be repeatedly pushed back. Eventually, the “Australian government and Naval Group signed a strategic partnership agreement (SPA) in February 2019 nearly 16 months behind schedule.”

With a total of 12 Attack-class submarines to be built in Australia in cooperation with France, the already significantly delayed and complex project fell even further behind. Even though the Collins-class submarines were scheduled to be retired in 2026, the construction of the first Attack-class submarine would at best begin in 2022, meaning the boats were likely to be delivered to the RAN by the middle of the 2030s, well behind schedule.

The Urgent Need to Counter China

How does this all relate to the formation of AUKUS? On the Forbes website, Craig Hooper straightforwardly notes that “Australia’s deal to build 12 conventionally powered variants of France’s front-line nuclear-powered attack submarine began to look puny, particularly as China is showing signs of expanding its small nuclear submarine fleet.” 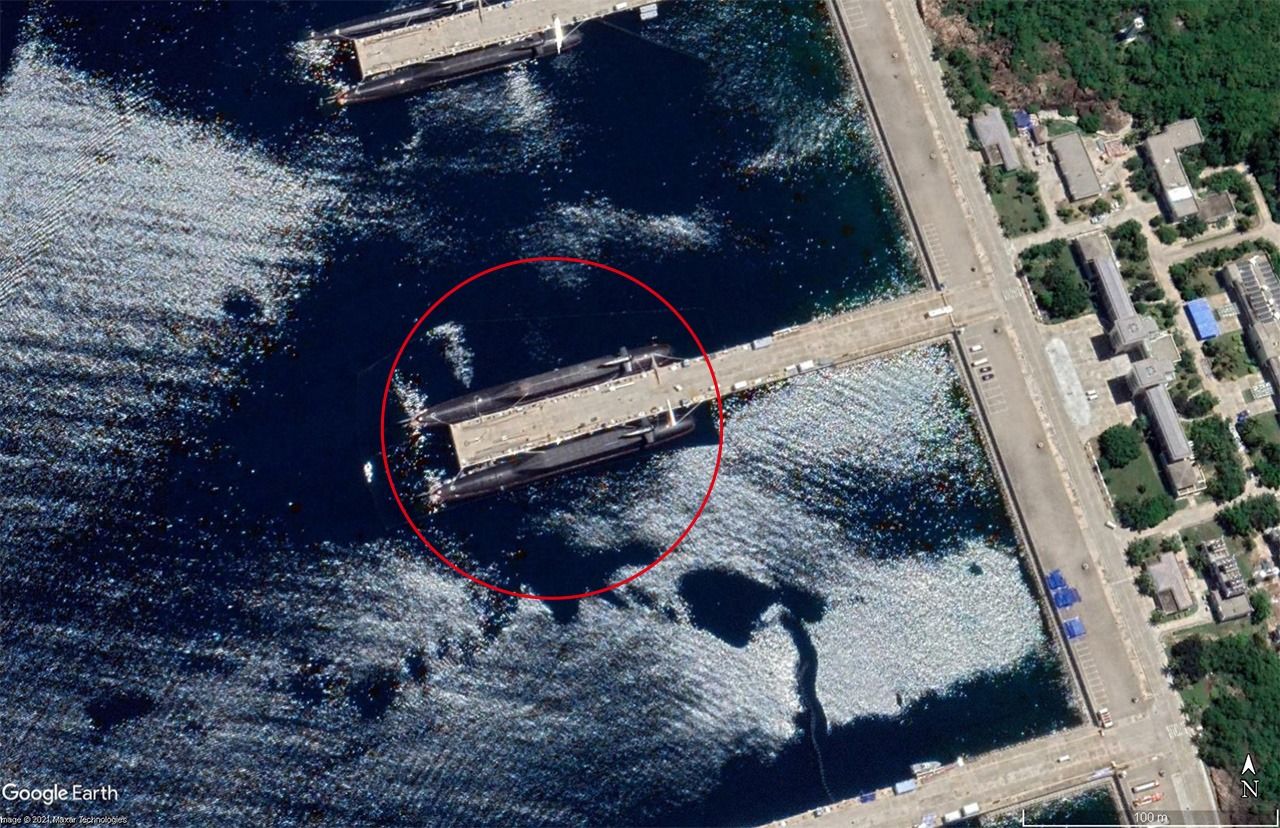 Google Earth image of what is believed to be a Chinese Navy Type 094 ballistic missile submarine docked at a military port on Hainan Island.

China currently possesses about 60 submarines, second only to the United States and Russia. It has also fielded at least six nuclear powered Jin-class submarines equipped with nuclear-tipped ballistic missiles (SSBNs). As of 2021, China’s six Type 094 SSBNs are equipped with JL-2 missiles. These submarine-launched ballistic missiles have a range of around 7,400 kilometers, and each carries up to four nuclear warheads.

As I described in detail in an article last year, SSBNs patrol the South China Sea as the Chinese government continues to militarize the disputed area. 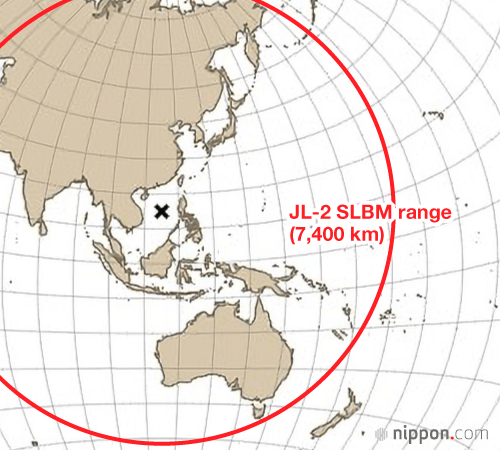 It is also worth noting that Type 094 SSBNs equipped with JL-2 missiles deployed to the South China Sea are capable of targeting both Japan and the entirety of Australia. China’s Type 096 SSBN, which it plans to commission in the 2020s, will be equipped with JL-3 missiles with a potentially range of 12,000 to 15,000 kilometers. If deployed to the South China Sea, not only will the mainland of the United States come into range of China’s nuclear forces, so too will Britain and France.

After the Joint Statement on AUKUS, Australian Prime Minister Morrison then announced that the RAN’s Hobart-class Aegis Combat System–equipped destroyers, and potentially the Collins-class submarines currently undergoing life extension work, would be equipped with Tomahawk cruise missiles. Outfitting Australia’s new submarines with nuclear propulsion together with Tomahawk cruise missiles, which have a range of more than 1,600 kilometers, significantly enhances the RAN’s ability to project sustained power far from continental Australia.

The simultaneous signing of AUKUS and cancellation of the $65 billion contract with the French submarine contractor on September 16 resulted in Paris recalling its ambassadors to the United States and Australia. However, a phone conversation between French President Emmanuel Macron and US President Joe Biden on September 22 smoothed the way for a return of both ambassadors.

Then, on October 29, the US President met with French President Macron ahead of the Group of 20 summit in Rome and agreed to a joint statement. Biden acknowledged that the United States “acted clumsily and without a lot of grace,” while the joint statement noted that “The United States welcomes France’s enduring role as an Indo-Pacific partner, whose long-standing commitment, geography, and military capabilities based throughout the region make it a key contributor and security provider to a free and open Indo-Pacific.”

While the joint statement skirts around the question of AUKUS, it notes that a US-France defense and trade strategic dialog will be launched. Nevertheless, on the same day, the British Embassy in Australia tweeted an image of the Royal Navy’s Astute-class attack submarine that had arrived in Perth in western Australia. It was tweeted to reinforce strategically signaling around AUKUS, perhaps directed toward China.

It’s A warm welcome for the @RoyalNavy Astute class submarine in Perth today. Part of the #CSG21 deployment it demonstrates the UK’s commitment to the region which #AUKUS reinforces #CSG21 #AUKUS pic.twitter.com/L1bDPyjVpZ

In addition to enhancing the range and performance of Australia’s submarines with nuclear propulsion, one of the goals of AUKUS is to equip the Royal Australian Navy’s surface ships (Hobart-class destroyers) and its submarines with Tomahawk cruise missiles. Together with enhanced CBASS Mark 48 torpedoes, the RAN will be able to better support regional efforts to counter China’s growing surface and underwater capabilities, the latter including Type 094 and future Type 096 ballistic missile submarines.

In his Forbes piece, Hooper adds that as “Most of America’s 28 remaining Los Angeles Class subs are set to retire,” if the United States was to consider leasing them to Australia, Australia could “support various US demands in the region” while solving some capacity issues for the Pentagon.

Hooper also notes that America and the British could transfer essential design blueprints for “nuclear-sub-ready piers, nuclear-ready floating and conventional dry docks, and other specialized facilities, letting Australia begin building out the infrastructure needed to support both US and UK attack submarines.” The other “specialized facilities” mentioned by Hooper could include a storage facility for Tomahawk cruise missiles that Australia’s warships and submarines will be equipped with in the future. The USN and British Royal Navy would then be able to make use of these Australian facilities, further increasing the strategic significance of AUKUS cooperation.

It is unclear exactly how closely Australia’s future submarines will resemble either the USN’s Virginia-class or the Royal Navy’s Astute-class submarines in design terms. However, all three will have one thing in common: being capable of launching Tomahawk cruise missiles. Australia breaking the submarine contract, with the United States and the United Kingdom even going as far as supplying Australia with coveted nuclear-powered propulsion and Tomahawk cruise missile technology, demonstrates the seriousness with which the United States and the United Kingdom, especially the Biden administration, are attempting to encircle China and restrain its burgeoning military capabilities.