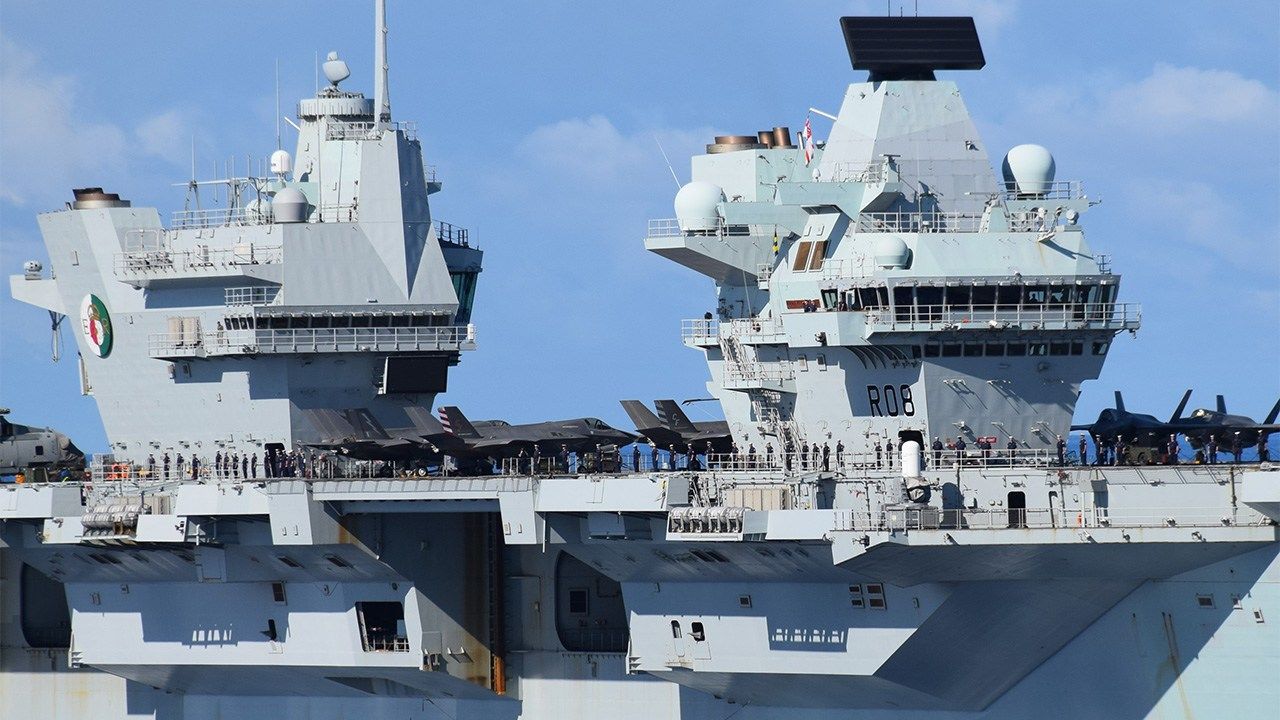 Britannia Tests the Waves: What CSG21 Means for Japan and the Region

Politics Nov 19, 2021
The British Carrier Strike Group 21, led by HMS Queen Elizabeth, recently completed a historic months-long deployment to the Indo-Pacific, including joint exercises with Japan, South Korea, and other security partners in the region. Defense expert Tsuruoka Michito assesses the mission’s significance for Japan and the US alliance system.

In November 2021, Carrier Strike Group 21, led by Britain’s state-of-the-art aircraft carrier HMS Queen Elizabeth, headed home from its historic five-month deployment to the Indo-Pacific. For Britain, the deployment was unprecedented in terms of the makeup and size of the strike group, the duration of its deployment, and the content of its mission, including joint naval exercises with Japan and other security partners in the region. But what was the purpose of CSG21, and what did it actually accomplish? What is the outlook for Britain’s continued commitment to Indo-Pacific security, and what are the implications for Japan?

“Global Britain” on the move

From Britain’s perspective, CSG21 was a concrete demonstration of the government’s “tilt towards the Indo-Pacific,” as set forth in the Integrated Review of Security, Defence, Development, and Foreign Policy published in March 2021. The deployment was designed to project a new image of Britain as a power open to and engaged with countries beyond Europe and to showcase Prime Minister Boris Johnson’s vision of a post-Brexit “global Britain.”

Deeper involvement in the Indo-Pacific has been on Whitehall’s foreign policy agenda for some time now. But Brexit greatly intensified the British government’s sense of urgency about the need to strengthen ties with countries outside of the EU, and the Indo-Pacific region was a natural focus, given its fast-growing economy and its significance from a global security standpoint. Johnson’s government has placed special emphasis on strengthening ties with Japan, India, and Australia, as partners sharing values.

CSG21 was also an ambitious, high-profile example of Britain’s longstanding “defense diplomacy” (also known as “defense engagement”), the employment of defense asset and resources for the country’s international influence. Even though the COVID-19 pandemic precluded the use of HMS Queen Elizabeth for such diplomatic functions as public tours and onboard receptions, the spectacle of the presence of the mighty carrier sailing in the region must have symbolized Britain’s presence.

The deployment of such an impressive force has a substantive military significance as well as a symbolic one. This aspect has been apparent from the very beginning. F-35B onboard HMS Queen Elizabeth took part in a bombing campaign against the Islamic State in Syria and Iraq, when the aircraft carrier was in the Mediterranean. It was HMS Queen Elizabeth’s first combat mission.

Arguably, the most important feature of CSG21 from a military perspective was the fact that it comprised American as well as British forces. Although the media in Japan and elsewhere tended to focus on the novelty of a British aircraft carrier visiting the region, the fact is that more than half of the F-35B stealth fighters deployed on HMS Queen Elizabeth—10 out of 18—were US Marine aircraft. In addition, USS The Sullivans of the US Navy participated in the carrier strike group throughout the mission. The unprecedented scale of this commitment shows how seriously the United States took CSG21.

The main military objective of the deployment was to exercise and certify the capability of British and US forces to conduct joint operations in the Western Pacific involving such high-end weaponry as aircraft carriers and F-35B jet fighters. Although Britain and the United States had conducted numerous drills together in the North Atlantic, these were their first joint exercises in the Western Pacific. 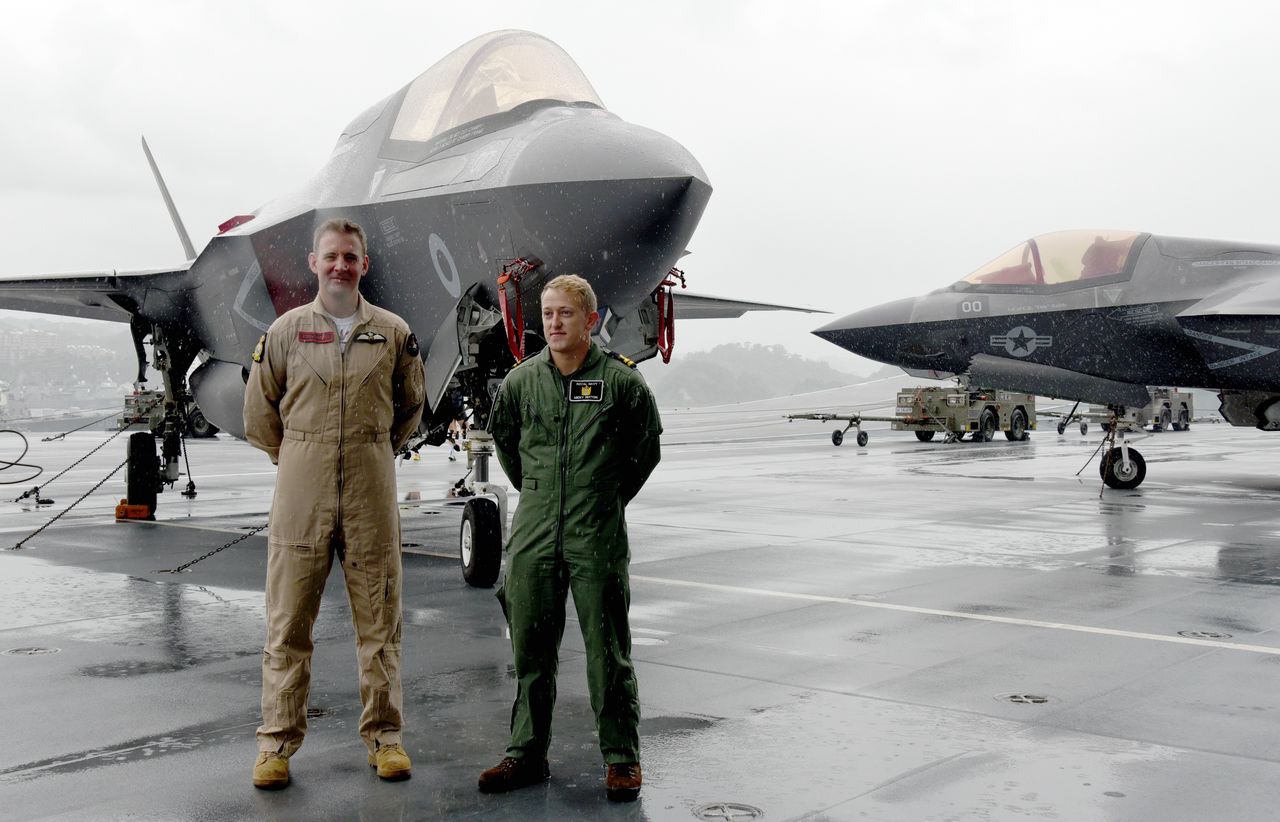 Two pilots pose on the British aircraft carrier HMS Queen Elizabeth at the US naval installation at Yokosuka, Kanagawa Prefecture, on September 6, 2021. Behind them, at right, is a US Marine Corps F-35B stealth fighter jet. (© Jiji)

Nowadays, military cooperation between the United States and Britain—and naval cooperation in particular—is oriented to the ideal of “interchangeability,” a level of integration that goes beyond the traditional goal of “interoperability.” The idea is not simply for units of both countries’ navies to operate effectively side by side but for elements from both to combine into a seamless unit for the purposes of a given mission. CSG21 was a testing ground for this concept.

Making an Impression on China

Given the emphasis on high-end capabilities, it was evident that one of the main aims was to send a strategic message to China. It was clear from the beginning that Beijing has viewed CSG21 with alarm, or at least with deep displeasure. With pointed criticisms and warnings emanating from Beijing, some in Britain feared that the carrier group might encounter obstruction or harassment from the Chinese if it ventured into sensitive areas in the South China Sea, creating the potential for a dangerous escalation.

Yet, it has turned out that China’s physical response to the UK-led carrier strike group was less than expected. While there were reports of Chinese submarines shadowing members of the carrier group, the interaction was never such as to give cause for alarm.

It seems that the UK was careful not to provoke China too much. Such attitude could also have been influenced by an incident between Britain and Russia in the Black Sea in late June, where Russian forces fired warning shots at the British destroyer HMS Defender, one of the main ships of the strike group, as it sailed through Crimean territorial waters. Nevertheless, the British frigate HMS Richmond sailed through the sensitive Taiwan Strait in late September—following its port visit in Japan—possibly to dispel the impression that Britain was caving into China.

Despite all the press attention to “freedom of navigation operation,” it, in fact, may not have been the top priority for British and American military planners in the Western Pacific. Their main intent appears to have been demonstrating an ability to conduct high-end joint operations involving aircraft carriers and stealth fighters. Judging from the unprecedented scale of the exercises conducted by British and American forces—with two US carriers joining HMS Queen Elizabeth—that was indeed the thrust of CSG21’s message to Beijing.

Can Japan Change its Mindset?

Japan’s Self-Defense Forces took part in a variety of joint drills with CSG21. Tokyo believes that developing defense ties with the UK and showing it to the wider international community could help maintain the peace and security of the Indo-Pacific. In more practical terms, there must have been keen interest within the SDF in learning about the operation of F-35B fighter jets from HMS Queen Elizabeth, as Japan is set to operate its own F-35B onboard Izumo-class destroyers in the coming years.

Yet Tokyo does not seem to have a clear strategy for making the most of such a rare opportunity. Japan has been more or less reactive to the proposals from the UK, instead of taking the initiative by proposing drills geared to Japan’s own security concerns and priorities.

The fact that Japanese and British submarines trained together for the first time in history was remarkable and there were fairly sophisticated joint anti-submarine warfare (ASW) and air defense exercises. Yet the training involving Japan’s F-35A stealth fighters did not seem to be substantial or advanced, most probably below what the British had expected. Japan could have profited from a more ambitious drill as well.

If Japan is to benefit strategically from its budding relationship with Britain (and other partners for that matter), it must consider how best to “plug” that relationship into the activities of the Japan-US alliance. But it cannot do so as long as it remains mired in a postwar mindset of dichotomy that regards the United States as Japan’s only full-fledged partner in defense and relegates all other security relationships to the level of exchange.

Treaty obligations aside, Japan could make a major contribution to the stability of the region by demonstrating a capacity to act not only with the US, but also with other US allies, including Britain, Australia and France. Such a coordinated effort by like-minded countries is the best plausible way to support the US presence in the region and maintain a stable balance of power in the face of China’s growing strength and influence.

Although Japan’s security establishment welcomed CSG21 as a sign of British engagement in the Indo-Pacific, some expressed skepticism as to Britain’s ability to sustain the commitment, given the overall size of its military. The Japanese side did not neglect to raise this point during the meeting between Japanese Defense Minister Kishi Nobuo and British Defense Secretary Ben Wallace held in July 2021, with the carrier group en route to Japan. According to a press release on the meeting by the Japan Ministry of Defense, “the two Ministers shared the recognition that . . . the UK’s commitment to realize a ‘Free and Open Indo-Pacific’ is a robust and an irreversible one.”

As if to buttress this pledge, the British used the occasion to announce the names of two naval patrol ships to be stationed in the Pacific under a long-term deployment plan floated the previous March. The announcement provided concrete assurance that CSG21 represented more than a “one-off” spectacle.

Further assurance came with the formation of the trilateral AUKUS strategic partnership announced by the United States, Britain, and Australia on September 15, just days after HMS Queen Elizabeth left Yokosuka. The centerpiece of the initiative is an agreement on the development of Australian nuclear-powered submarines with assistance from the United States and Britain, though the framework itself is said to cover other areas as well, such as AI (artificial intelligence) and cyber.

A full analysis of AUKUS is beyond the scope of this article, but it is pertinent to note that by agreeing to assist in the development of an Australian nuclear submarine program, Britain has made a security commitment to the region for generations to come. In addition to assisting in the building of the subs, Britain will be closely involved in their operation . It has also been reported that British nuclear attack submarines will use Australia as a base to enable longer and more frequent deployment in the Indo-Pacific. What is envisaged, in short, is a highly integrated submarine operation by the US, the UK and Australia in the South China Sea and beyond.

The announcement of AUKUS angered France, whose submarine contract with Australia of 2016 would be cancelled. In the long term, however, France too has an integral role to play in the security of the region as a resident power in the region, given its territories and citizens in the Indian Ocean and the South Pacific.

Beyond AUKUS lies the larger challenge of creating mechanisms for closer cooperation between Japan (via the Japan-US alliance) and US allies in the region and beyond such as Australia, Britain, and France. That could signal a major evolution from the current US alliance system.

What role will Japan play in this historic transformation? The answer will depend on this nation’s ability to envision and shape a new regional order in the Indo-Pacific.