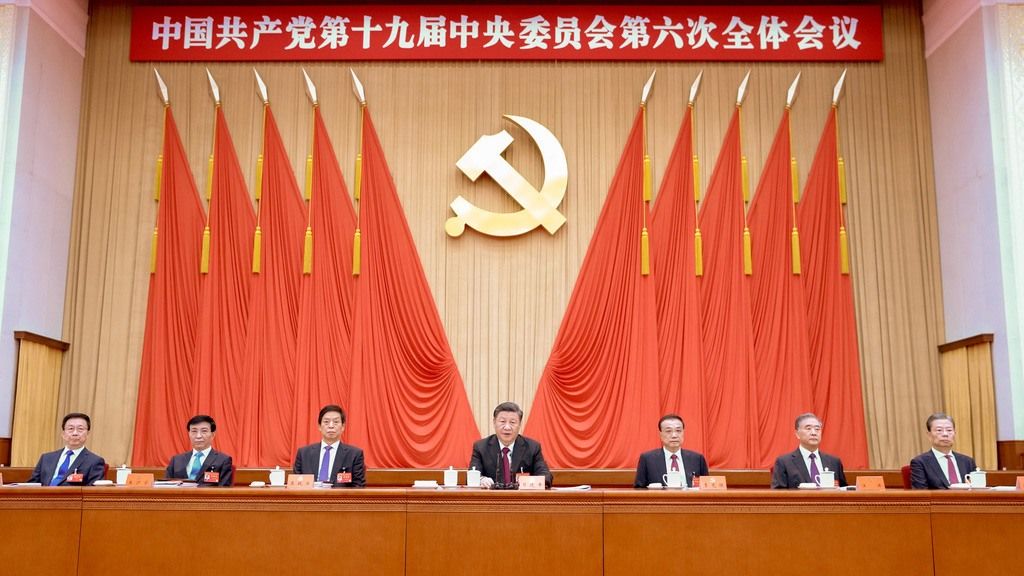 The World According to Xi Jinping: Perspectives on the CPC’s New Historical Resolution

Politics Jan 12, 2022
In November 2021, the Communist Party of China adopted a rare “historical resolution” embracing President Xi Jinping’s view of modern Chinese history and according him a place of honor alongside Mao Zedong and Deng Xiaoping. China watcher Kawashima Shin discusses the document’s content and its significance.

On November 11, 2021, on the eve of the 155th birthday of Sun Yat-sen, the Central Committee of the Communist Party of China approved a rare “historical resolution” exalting President Xi Jinping’s place in party history. The sixth plenary session of the Nineteenth Central Committee voted to adopt the “Resolution of the CPC Central Committee on the Major Achievements and Historical Experience of the Party over the Past Century” following a speech by Xi Jinping explaining the resolution’s content.

In the 100-year history of the CPC, only two other leaders have issued so-called historical resolutions: Mao Zedong in 1945 and Deng Xiaoping in 1981. In China, every official history functions to legitimize the regime in power, and Xi’s version is no exception to the rule. With this given in mind, let us begin by identifying some distinguishing features of current resolution.

First, it goes without saying that the November 11 resolution reflects and serves the policy goals and political aims of the Xi Jinping regime. Xi’s immediate objective is to remain in power beyond the de facto 10-year limit in place since 1976, which means securing either an unprecedented third term as CPC general secretary or appointment to the post of chairman (abolished in 1982). The November 11 resolution helps set the stage for such a decision by elevating Xi Jinping to a status comparable to that of Mao Zedong and Deng Xiaoping in the history of the CPC and the new China.

After recounting the origins of the party in terms of the confluence of China’s historical circumstances with the Marxist-Leninist ideology imported from Russia after the 1917 Bolshevik Revolution, the resolution highlights the pivotal role played first by Mao Zedong and then by Deng Xiaoping in the process of deepening and perfecting the marriage between socialism and Chinese society. Furthermore, it lets it be known that Xi occupies a comparable position.

Another way in which this third historical resolution differs from those of Mao and Deng is that it glorifies the current leader without directly criticizing his predecessors or rivals. Mao used the 1945 resolution to discredit the pro-Russian clique and buttress his own claim to leadership. Similarly, the 1981 resolution cemented Deng’s power by highlighting the errors of the Cultural Revolution under Mao and the cult of personality that persisted under Hua Guofeng. But Xi’s historical resolution directs no explicit criticism at rivals or former leaders. At most, it implicitly “demotes” heads of state like Hu Yaobang and Jiang Zemin in the process of elevating Mao, Deng, and Xi to a higher plain.

The November 11 historical resolution also stands out for the speed and manner of its adoption. In the case of the 1981 document, a rough draft prepared by the Political Bureau of the Central Committee was deliberated by a congress of 4,000 party officials in September 1980, rewritten, sent to local leaders for comments, and revised again before being approved by the party in June 1981. There is no indication that the latest resolution underwent a comparable process of deliberation and revision. According to Xi Jinping’s own explanation, the drafting began in March 2021, when the Politburo established a working group for that purpose under Xi himself, with Wang Huning and Zhao Leji as “deputy chiefs.” The following month, the CPC Central Committee issued a circular to “solicit opinions on the decision to focus the agenda of the sixth plenary session . . . on a full and systematic review of the major achievements and historical experience of the party.” In September, it was decided to submit the draft to party officials, the leaders of various political parties and organizations, and other “prominent figures” for feedback. The historical resolution passed two months later.

Although adopted on November 11, the resolution was not published in full until about five days later, spawning a good deal of speculation as to the reason for the gap. Given the compressed timetable, it may well be that more time was needed to fine-tune the content and language.

Let us now look more closely at the substance of the third historical resolution.

Delineating the Arc of History

The historical narrative set forth in the November 11 resolution is grounded in Xi Jinping’s policy of imposing a unified understanding of modern Chinese history, embodied in the “four histories” framework (history of the party, of the new China, of reform and opening, and of the development of socialism). Under this framework—already incorporated in Chinese universities’ core political science curriculum—modern Chinese history revolves around the party, rather than the Chinese state.

In his bid to unify Chinese historiography, Xi Jinping has made the party the sole arbiter of historical interpretation and simultaneously placed it at the center of modern Chinese history. The resulting account leads inexorably to the conclusion that socialism under the leadership of the Communist Party was and remains the only possibility for an independent, unified China. At the same time, it highlights the unique marriage of socialism and Chinese society—an ever-deepening relationship “grounded in China’s conditions”—and stresses the critical role played by Mao Zedong, Deng Xiaoping, and now Xi Jinping in the development of socialism with Chinese characteristics. It also portrays “reform and opening” as integral to that development.

The content and timing of the resolution, moreover, convey the idea that the 100-year-old party is embarking on a new historical era. Like the commemorative speeches delivered by Xi earlier in the year, the resolution touts the Xi regime’s achievement in reaching the party’s centenary goal of “moderate prosperity in all respects”—that is, mitigating the economic inequality that emerged as a side effect of the development and prosperity ushered in by reform and opening. Rather than propose a retreat from the path of reform and opening, Xi Jinping is attempting to redefine it as the pursuit of “high-quality development” (even while recognizing that “China is still in the primary stage of socialism and will long stay in this stage”). This is the “reform and opening” that the resolution pledges to deepen in the years ahead.

Xi Jinping’s administration has, in fact, advanced the cause of economic reform, even while strengthening and centralizing the party’s leadership in a manner some have branded as Maoist. Only in this way, we are given to understand, can China overtake the United States, turn itself into “a modern socialist country in all respects” by 2049 (the centenary of the People’s Republic of China), and ultimately achieve the “great goal of national rejuvenation.”

While on the subject of this great goal, we should take note of the document’s assertion that “resolving the Taiwan question and realizing China’s complete reunification” is “an unshakable commitment of the party” and “essential to realizing national rejuvenation.”

This language is not markedly different from that which Xi Jinping used in his July 1 remarks commemorating the centenary of the CPC or in his October 9 address on the 110th anniversary of the 1911 Revolution. (Indeed, much of the resolution’s text, from the historical exposition to the achievements of the Xi regime and the party’s future agenda, echoes those earlier speeches.) What is conspicuous, however, is the resolution’s forthright criticism of the government of President Tsai Ing-wen of Taiwan. “Since 2016,” it states, “the Taiwan authorities have stepped up separatist activities aimed at ‘Taiwan independence,’ which [have] seriously impacted the . . . peaceful development of cross-Strait relations.” This is stronger language than anything seen in Xi’s aforementioned statements.

In contrast to the alarming remarks Xi made on the subject of Taiwan at the beginning of 2019, the resolution does not mention the possible use of force to achieve reunification. This is consistent with the more moderate tone of recent statements. But China’s actions over the past year have belied its peace-loving rhetoric. The military has sought to intimidate Taiwan by conducting exercises and missions in the immediate vicinity. Moreover, in late November—just after publishing the party’s sharp criticism of the Tsai administration—Beijing imposed massive fines on the Taiwan-based Far Eastern Group, presumably to punish it for its financial support of Premier Su Tseng-chang (previously sanctioned by Beijing as a Taiwan separatist). Seen in this context, the resolution’s criticism takes on a more menacing nuance.

The third historical resolution is also notable for what it does not say.

As mentioned above, there is almost no direct criticism of past party leaders or government policies. The document acknowledges that the party is fallible, asserting that it is “great not because it never makes mistakes, but because it always owns up to its errors, actively engages in criticism and self-criticism, and has the courage to confront problems and reform itself.” However, the November 11 resolution declines to take aim at the kinds of errors so trenchantly criticized in the 1981 resolution—including the cult of personality.

This omission seems particularly significant in light of widespread criticism that the current regime is in fact promoting a personality cult centered on Xi Jinping through its relentless emphasis on “Comrade Xi’s core position” in the CPC, combined with its efforts to strengthen and centralize the party’s top-down leadership.

Under the heading of diplomacy, the concept of a “new model of great power relations” between China and the United States is also conspicuous by its absence. The slogan, once used by Xi to promote his vision of a win-win relationship predicated on mutual respect for one another’s “core interests,” has dropped out of circulation as tensions between Washington and Beijing have mounted. In this sense, the omission itself, like the resolution’s criticism of the Tsai administration, might be interpreted as a message to the world.

In this way, the recently adopted historical resolution performs several functions simultaneously. It serves as a sweeping work report, enumerating the Xi Jinping regime’s achievements and policy goals for the future, while sending oblique messages on such issues as Taiwan and China-US relations. By repeating the basic historical narrative presented in recent speeches by Xi, it serves as a tool for the regime’s policy of unifying historical discourse under the “four histories” framework. But most importantly, it exalts the status of Xi Jinping, cements his place in the party’s history, and paves the way for him to continue as China’s paramount leader for years to come.

(Originally published in Japanese. Banner photo: General Secretary Xi Jinping flanked by other top party leaders at the sixth plenum of the nineteenth session of the Central Committee of the Communist Party of China, November 11, 2021. ©Xinhua/Kyodo)